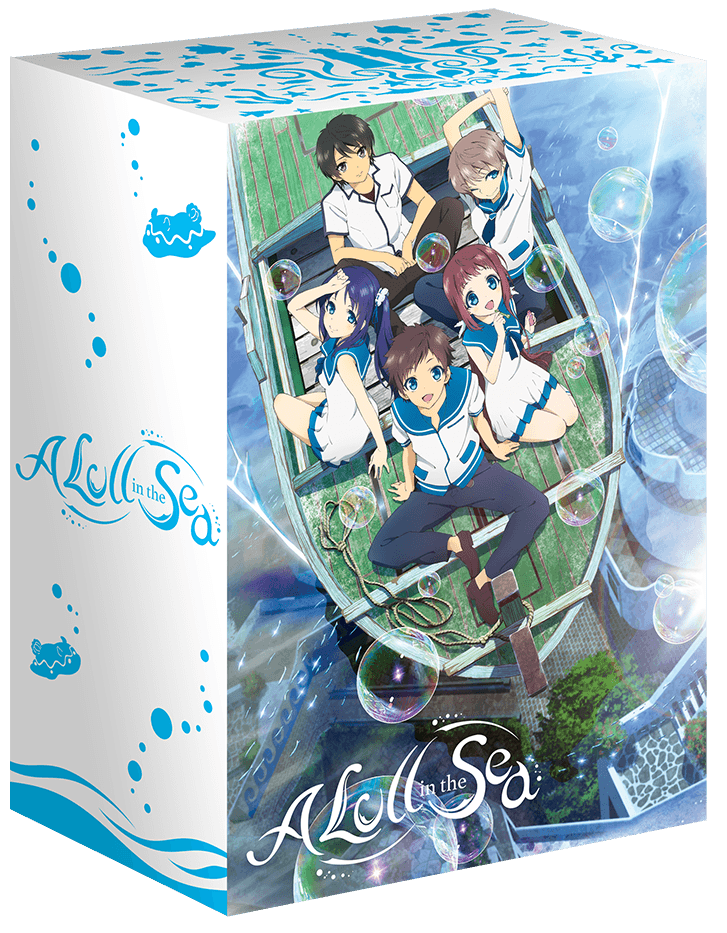 Overview
NIS America surprised many anime fans when they began releasing anime series in North America five years ago and just last year the company began experimenting with English dubbing their anime releases with Toradora!. Now a little over a year later, the company has now released a series right off the bat with an English voice track included in the form of A Lull in the Sea (previously known as Nagi no Asukara). While their first release may have been of a popular anime series they had released prior, was A Lull in the Sea worth the risk?

Story
Sometime long ago all of humanity lived comfortably under the sea where they are protected by Ena that allows them to breath and live underwater with no problems. However after some time humanity wished to venture onto the land and after doing so they lost their ability to return to the ocean due to the loss of their Ena, creating a distinct separation from land dwelling humans and those who live in the sea. Though this division has caused many issues between the two groups, they generally have learned to coexist. 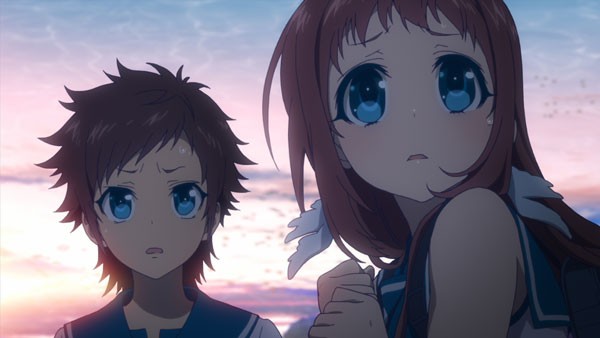 Due to the slow population growth of the sea village of Shioshishio the school that four middle school students were attending was forced to shut down and as such, these four students must now attend a school on the surface. Thanks to their Ena, the sea people can still travel onto land for a period of time before having to be refreshed with sea water but this is far from the worst problem that arises in these fourteen year old students.

The most outspoken and easy to anger member of the four, Hikari Sakishima, is completely against the idea of having to transfer to the surface while the more outgoing Kaname Isaki and subdued Chisaki Hiradaira don’t raise too much of a fuss about the transfer. Beyond the prejudices between the two groups causing Hikari’s resentment is the fact that the indecisive Manaka Mukaido, who he clearly has feelings for, is always in need of some type of help and on the first day of school ends up getting caught up in a fishing net, resulting in something of a fateful meeting between her and a surface dwelling boy in their class named Tsumugu Kihara. 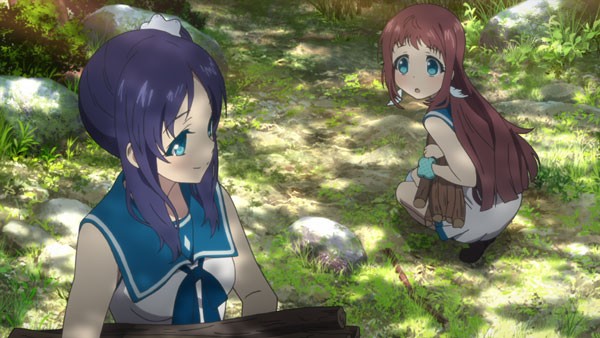 A Lull in the Sea could have simply tried to be a story where two groups of people try to forego past prejudices as a younger generation began to grow up in a world filled with those who continue to try and stick to tradition as proclaimed by the voice of the Sea God but it does far better than that.

Perhaps thanks in part to its twenty-six episode length, this series manages to not only pull off the aforementioned adaptation of the rules of society by having the children deal with the types of issues that arise between the people of the sea and the people of the land, such as how relationships are handled between the groups, but even goes so far as to make viewers care about what happens to the core cast and even the side characters, such as Hikari’s older sister, as well by providing many of these characters engaging moments and side-stories that you can’t help but become emotionally invested in. 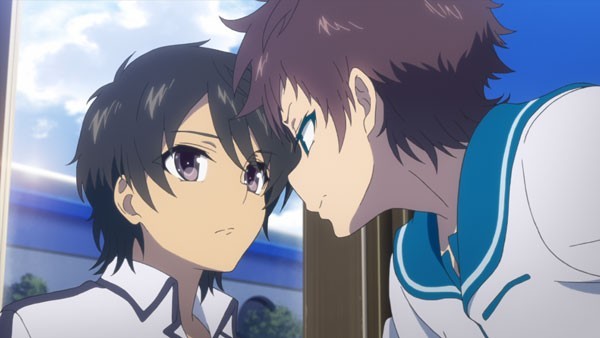 Of course this all would fall apart if the core cast wasn’t as strong as it is and what helps hold that together is the way that these characters develop over the course of the series and a (for once) properly used time-skip that advances the ages and maturity for a certain section of the cast while keeping many of the characters the same age as before, allowing a number of changes to occur naturally that likely would have felt forced due to the age of the group at the start of the series or simply wrong. Instead it creates a fresh feeling for the second half of the series by breathing new life into certain characters and also providing extra layers to an already highly enjoyable storyline with plenty of relationship developments occurring that you may never have guessed. 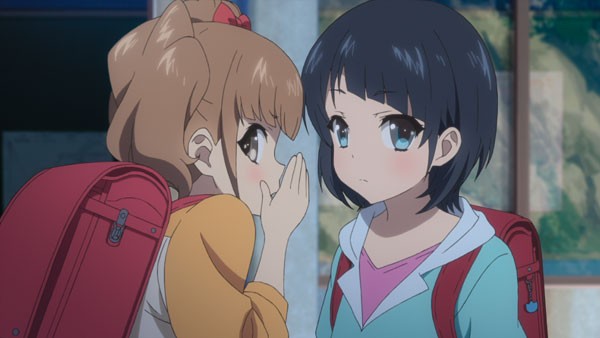 You see, as mentioned earlier Hikari is the character with the most obvious crush at the beginning but throughout the series we see relationships begin to shift as the characters develop emotional attachments with one another and watching these characters interact in such a way throughout the course of the series is a real treat, though it must be said that the of number of slice of life moments do feel like they slow down the pace of the story a bit too much in an effort to try and draw the series’ length out even if most of these sequences also provide some of the best comedic sequences of the series.

Visuals
For the most part P.A. Works has been known for producing some rather amazing looking anime series in the past with the likes of Hanasaku Iroha and Angel Beats! being some of their better series and thankfully they have managed to bring that same level of quality to A Lull in the Sea. There is a distinct different established between the styles of the cities on land and the sea city of Shioshishio. One must really compliment the way the environment looks especially during the underwater sequences as fish swim through scenes like it is entirely normal while being set against some highly detailed background scenery. 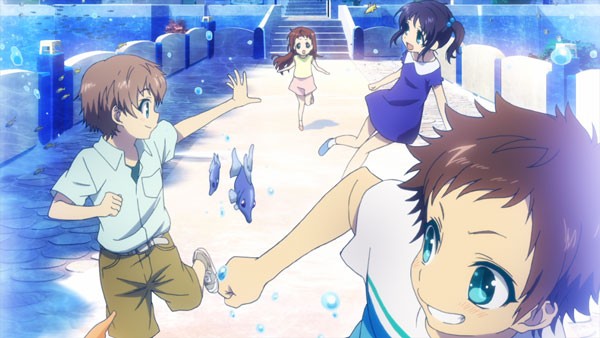 The characters themselves do feature some fairly standard character designs but they have a few standout details that help set them apart from the standard fair. It also helps of course that the entire series is saturated with vivid coloration (that looks amazing on this Blu-ray release) to help bring the world to life and breathe some extra life into the characters.

Audio
This marks the second time that NIS America is attempting to deliver an anime series with an English dub and I must say that they have managed to nail the casting once again. The English voice cast does a superb job fitting the characters’ personality, even helping make a certain perverted authority figure seem more likable as opposed to his Japanese voice actor. Of course the Japanese voice track is included for those who would prefer to listen to the series in that way though it does feel like those doing so would be missing out. 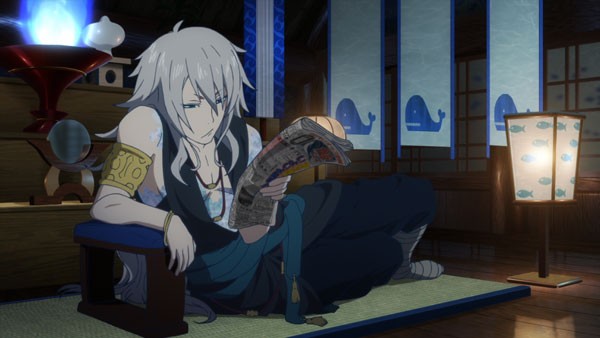 The soundtrack for the series features a number of great sounding tracks mixed in with the series that help bring out the emotional impact of some scenes, though you can mostly only appreciate some of these songs with the accompanying soundtrack CD. As for the opening and ending theme, the series features two different themes split down the middle with each song fitting the nature of the series quite well though unfortunately not being very memorable.

Extras
Over the years we’ve seen NIS America’s premium editions change from overly large chipboard cases containing a large artbook accompanied by two slimpak DVD sized cases to the more recent standard DVD sized chipboard cases and in the case of A Lull in the Sea this is for the series’ benefit as they have done an exquisite job with the packaging here. The chipboard case features colorful artwork of the cast on both sides of the case while the top and side feature sparkling embossed aquatic designs. 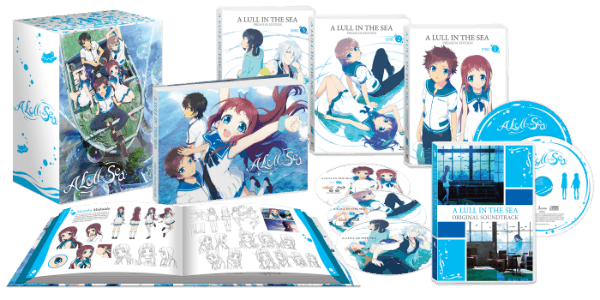 Contained within this case are three DVD sized cases containing artwork inside plus the Blu-ray discs for the series as well as a similar sized case containing the aforementioned two disc soundtrack. This soundtrack features almost all of the songs from the series though unfortunately only the TV size versions of the opening and ending themes and many of the insert songs are not included on the soundtrack though a slip containing the English translations of the lyrics is included here.

Finally we have the full color art book that features far more detail than many of NIS America’s past art book release as this release features over twenty pages of character designs and extra details followed by the standard episode discussion that is now accompanied by commentary from the original staff about each of the episodes where they provide insight into various decisions made during production. The art book concludes with sketches and final designs for various props and vehicles well as multiple pages featuring the detailed backgrounds shown throughout the series.

Overall
A Lull in the Sea is the type of series that a viewer can get lost in as they watch the characters progress through their lives in a well-written world that you may become so engaged in that it’ll be hard to step away. NIS America has managed to succeed in providing a great sounding English dub to go along with the series and those who may have skipped out on watching A Lull in the Sea in the past would be doing themselves a disservice to pass it up now. 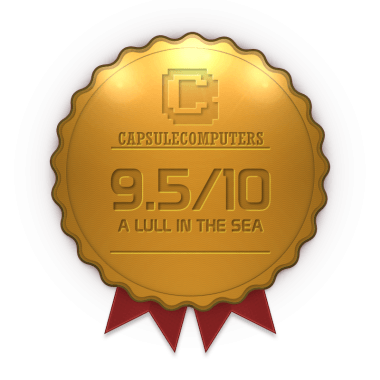