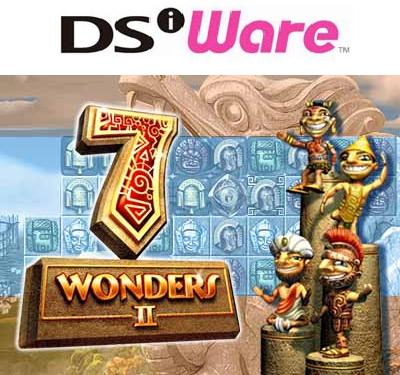 Overview
Remember when Tetris was the only relevant puzzle game? Well, that was a long time ago now, and the market is full of clones and new spins on the age old formula, with more developers mimicking the likes of Bejeweled, rather than the old brick-laying favorite. Yes, 7 Wonders II takes the match-3 mechanic for itself, but with an interesting gimmick attached where you can literally construct ancient wonders as you play. Sure, it’s not original, but does it offer enough to stand out from the crowd? Here is my review for 7 Wonders II for the DSiWare Service. 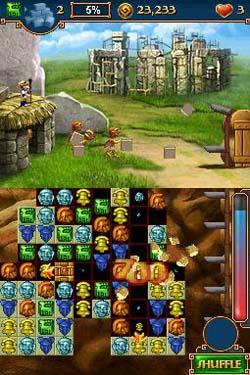 Gameplay
7 Wonders II has been around for a good while now, first hitting the PC back in 2008, and later seeing a cartridge release for the Nintendo DS in early 2010. The eShop is a new market altogether though, and while this version is essentially the same as it’s cart kin, it definitely has a lot to talk about when it comes to the way the game works. Think of Bejeweled, but with stylus controls. Yep, that core match-3 formula is the backbone of 7 Wonders II, but the stylus is very precise and makes the game easy enough to play for just about anybody out there. 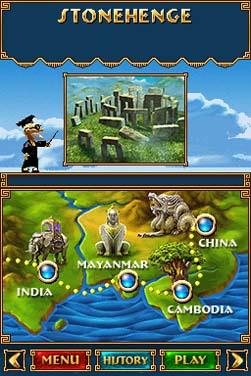 To spruce things up a bit, power-ups come into the picture after blocks are smashed – letting players clear rows when they connect four blocks, or clear rows and columns when five are taken out at a time with a special tile. Other special blocks also come into play based on performance as well, such as the dice block that crashes multiple tiles at once, or one the many unique special abilities that can assist in garnering a high score in a short burst. Racking up points is of course the main objective for 7 Wonders II and these combos of sorts are an easy way to do it, but the key ingredient of what makes this experience different are the “Wonders” that the game gets it’s name from.

As you play, little workers will begin toting blocks and other materials across the screen. These little men represent your own success in the game, and as more of the board is decimated, your side meter will fill up in order to construct a wonder. Structures like Stonehenge and the Taj Mahal make for a clever little reward for completing a stage, and as you progress through areas, you get to see each come together – piece by piece. Now the preference for wonders being built is certainly in the eye of the beholder, but I found these charming little builders to be a great incentive to keep on progressing through the many stages. With 7 wonders in all (go figure), it’s not hard to lose chunks of time as you plow through levels as the match-3 gameplay is still quite addicting. 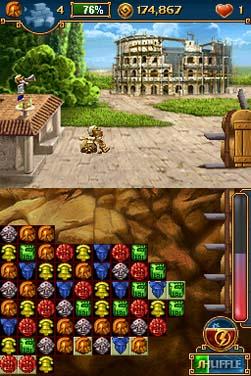 One of the other unique elements of the game are the layouts of the boards, as well. Sometimes a standard rectangle will make up your playing area, but latter stages feature a stronger difficulty as some boards have been broken up into pieces to offer the player a bit of a challenge when it comes to working in tight spaces. As a bonus, there is also a little mini-game that be discovered, which has the player attempt to drop a special item to the bottom in a limited amount of moves. This is a rather small addition that doesn’t really feel too special, but it does break up the tediousness and boredom when featured. Yeah, the whole game is solid as a puzzler and the uniqueness as there, but even with all of the themes in motion, I found most of 7 Wonders II to be a tad too…well..basic. Most puzzle fans out there won’t care to spend hours with a title like this, but with little change to the standard mechanics, others are sure to grow tired of the same stylings of gameplay throughout their constructive careers.

Visuals and Audio
Visually, these gems are bit stale and have little flare to them. The backgrounds however are well designed and keeps your time traveling through stages interesting due to all of the different locales. When a combination is made, the blocks animate very fluently as well, with little to no slowdown during a major chain, which is something other match-3 titles have had a problem with on the DS. The stars of the entire experience are of course the little minions on the top screen though, and there are plenty of humorous happenings that can be spotted as they build their lonesome lives away. 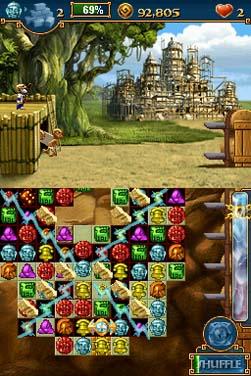 As for music, there isn’t a fully featured soundtrack to boast about, to be honest. The tunes do get their job done decently however, and all play well into whatever locale you may be visiting, but again, don’t expect anything too memorable or soothing (like the music from Bejeweled). Sound effects are pretty standard as well, offering your usual bout of smashes and klinks as you clear the board.

Overall
7 Wonders II is a solid puzzler that is sure to catch the eye of all match-3 fans. The gameplay is fun, the gimmick works, but the game itself never seems to try hard enough to offer more and tastes a bit vanilla as a result. With that said, this title still bares a low price and is a perfect fit for the handheld, which makes it easy to still recommend for anyone who has been looking for a puzzler with a good amount of content and a classic….yet overused core.