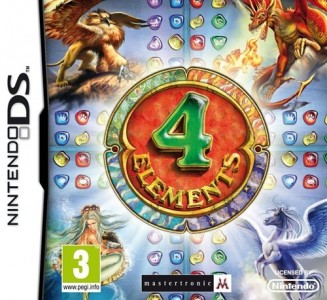 As puzzle games go, 4 Elements offers a rather more rich, diverse story when put into perspective in a comparison with a traditional puzzler. Where most casual puzzlers are content to provide little more plot than combining a series of coloured tiles in order to make an already chirpy character smile, 4 Elements tells the story of a magical fairytale realm left in turmoil as a result of the four elements, Earth, Fire, Water and Wind. What was once a blooming kingdom now lies shrouded in a dark cloud, bitten by a cold freeze and with trees and other life perishing. It has now fallen upon you to complete these puzzles to recover the pages of the magic elemental books and meet with the wise old mage to restore the mystical land. 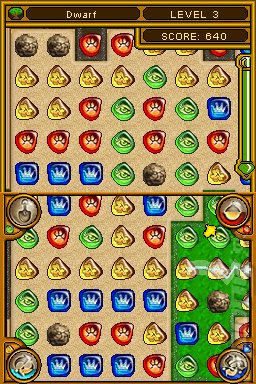 While the storyline doesn’t play a huge part in the game (with casual puzzling making up the majority of the title) the setting presents an interesting change from your average casual title. All manner of mythical creatures such as dragons, phoenix and elves make appearances, with this fantasy influence impacting the art-style and in-game soundtrack accordingly.

It seems 4 is the magic number in 4 Elements; there are four different ancient books of magic, each of which are split into four pages which are then broken up into four levels to be completed in order to restore the page; each match-3 game board is filled with pieces of four different colours, combos of which filling up the gauges of four different power-ups; and finally, the game will take you around four hours to fully complete. When you do the maths, four elemental books, each broken up into four pages which are then divided into four sections makes a total of 64 levels. This may sound like a lot, but when you take into account that each level takes approximately 5 minutes (with early levels taking less time and harder ones towards the end of the game taking slightly longer) it’s suddenly much less vast. 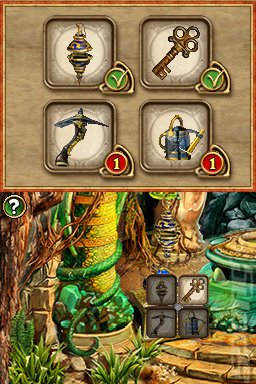 However, 4 Elements is actually a puzzler in every sense of the word because as well as these 64 match-3 levels, it combines other aspects of the puzzling genre through hidden object searches at the start of every book, and spot the difference games concluding each page. The spot the difference games in particular are well suited to the DS due to the dual screens displaying each image separately – ideal for spotting the differences. The hidden object sections also work well by making use of the touch screen interface, even if the grainy visuals of the DS do make it harder to locate the items.

Fortunately, both of these bonus puzzle aspects of the game are short, so if you don’t like them then it’s not a problem. Primarily, 4 Elements is a match-3 puzzler in which you must carve out a path for liquid to flow from point A to B. Using combos of at least 3, you must form lines of the same colour, with chains of 5 pieces and upwards causing explosions to clear more of the game board. There is also a time limit for each challenge represented by a vial of green slowly draining away, although this only comes into play towards the end of the game on the more demanding puzzles. It is basically as simple as it sounds: easier puzzles towards the beginning make the game accessible for people of all ages/skill-levels, and a progressive difficulty curve ensures more accomplished gamers won’t get bored. 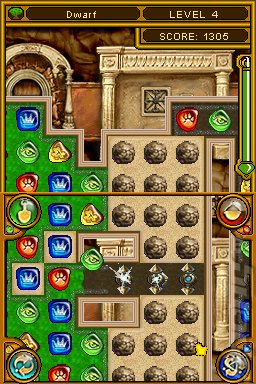 There’s also a number of in-game obstacles that must be overcome while playing, further upping the difficulty in the later levels. These can range from boulders blocking the way which need to be dealt with, barriers needing destruction from arrows positioned around the level, or even just a more complex level structure helps to increase the level of difficulty, all of which are challenging additions by the developer which help to create a more gripping experience. They also allow for a more tactical approach on what would have otherwise been quite simple and straight-forward.

4 Elements is essentially a toned down version of a popular PC game of the same name, and for the most part, it has made the transition well. Although grainy graphics of the handheld are a step backwards from the home computer original, the DS’s features like the touch screen and dual screens work so well with the game that it’s hard to picture the game without the use of the DS. The fairytale setting is an interesting deviation from the puzzle game template, which despite not having a huge impact, provides a welcome change nonetheless. There’s something for everyone with match-3 missions of varying difficulty, as well as extra tidbits of hidden object hunting and spot the difference thrown in. Unfortunately, it’s a bit too short and once completed, it tenders little/no replay value. Plus, in essence it is just a port of a PC game selling for a fraction of the price of this latest DS release.