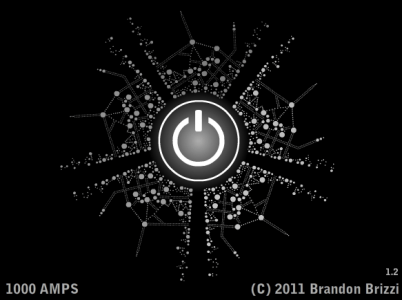 You are “Plug”, a little dude that can jump and move around the world. At first you cannot see anything but the bounds of the room you are in. But everything you touch lights up, revealing it’s true nature; a wall here, an Energy Node there. As you light up energy nodes, you can use their energy to jump higher.

Once you leave a room, however, you forget all about it, and have to start discovering it all over again when you go back to it. Discover all of the energy nodes in a room, though, and it will power itself, staying lit permanently, and emanating a pleasant tune. 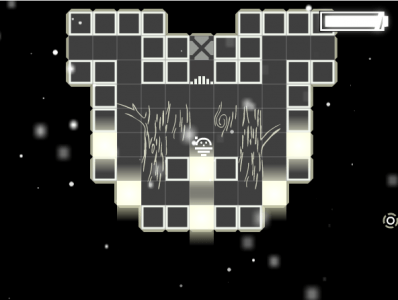 Eventually, you’ll meet an entity that takes care of and maintains the power grid that makes up the world. There is some force attacking the system, dampening her powers. She needs your help to bring light to the world once more, and repair her damaged systems. To aid in your quest, she gives you the power of teleportation, allowing you to click on any empty space, blinking to hard-to-reach places, and draining the energy of the surrounding blocks. You’ll need to discover at least one Energy Node in a room to use this ability, however.

Once you’ve gained this power, you’ll start to notice “X” blocks; empty blocks which cannot be teleported into. Also, mysterious killer blocks which move of their own volition will appear in certain places, hunting down any lit Energy Blocks and draining them of their energy.

The world is vast, giving you harder and harder puzzles as you play. It’s quite amazing how many unique and challenging puzzles can be created using such a simple and small selection of pieces. For the more difficult rooms you just can’t get through, there are “Seeds” you can pick up along the way, and once you have 5, you may spend them to fully activate a room.

The to move and jump, you simply use the arrow or WASD keys. Enter pauses the game, where you can save or quit the game. 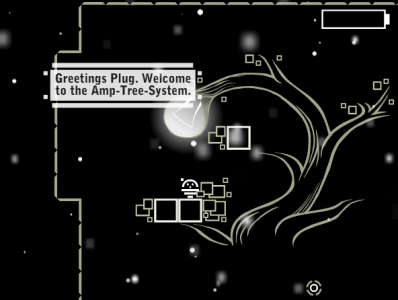 The art style might be likened with Limbo, with everything black and white. Amps focuses on the light side of this style, however, using bloom effects to accent the activated Energy Nodes, and lighting up blocks as you touch them to slowly reveal the world to the player.

There’s even a nice transition when you leave a room, reminiscent of flickering tube lights being turned on. The background also is filled with subtle animations, keeping the world alive and interesting when you take a moment to thin through a particularly challenging puzzle.

The sound design for the game features simple bleeps and bloops when you jump or bash your head against a block, and a little ditty that plays when you’re in a fully-lit room. And while they can grate on you after a little while, those snippets of music do add a certain atmosphere to the game.

1000 Amps is a solid little puzzler, though that’s pretty much as far as it goes. What it does, it does well, and any fan of the puzzle platforming genre will love grinding through these superbly constructed brain teasers. Some may get fed up of the simple graphics and lack of “proper” music… but this game isn’t really meant for them.