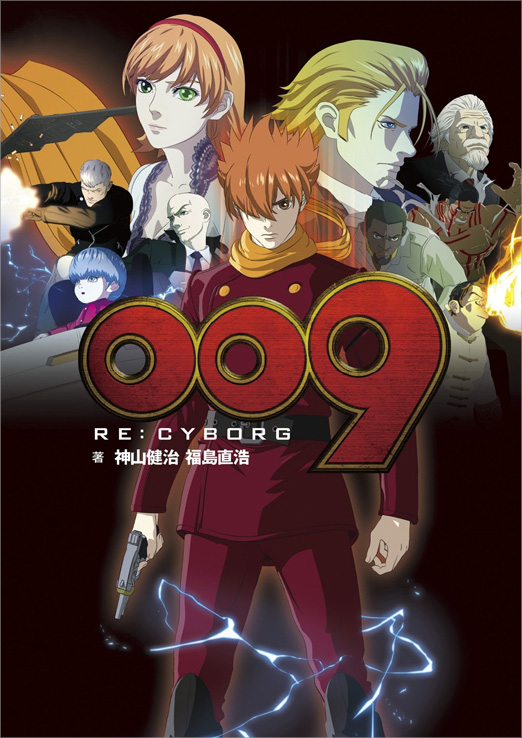 Overview
It’s been 49 years since 009 Cyborg was first released. Wow. With a manga, a game, two anime films and two anime series already to its name, comes one more film. Redesigned and brought into a new age, 009 Re: Cyborg  continues the story of the 00s and the world they fought to protect. 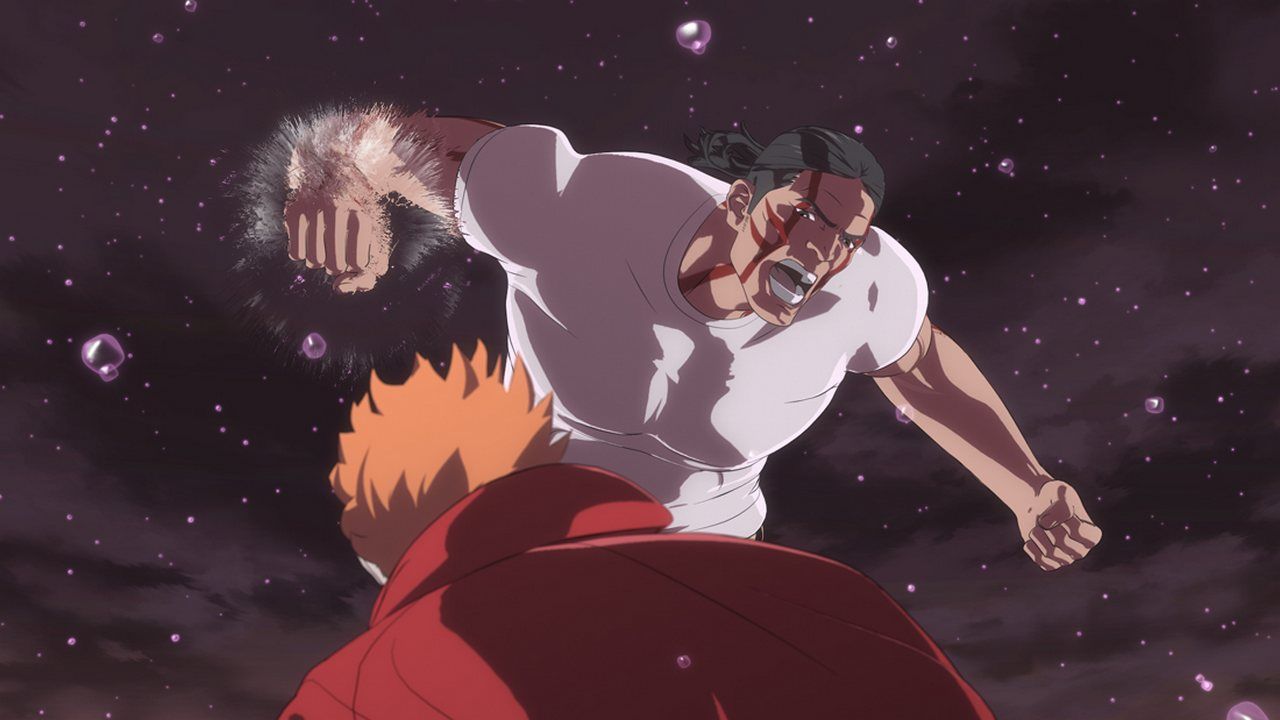 Violence, in all its slow motion glory

Story
“In the beginning was the Voice, and the word was Him; and all obeyed His word in great awe. But those who dwelt upon the land, through vanity, cunning and greed, attempted to build a multitude of towers whose tops reached unto heaven, and accumulated great wealth on earth. Scattering across the land and laying it to waste, man turned a deaf ear to His Voice. So He gave unto man an opportunity to atone for his misdeeds; and flame and smoke and the roar of a lion descended upon earth; and shattered the many towers to dust….”

Decades after the rebellion of the Cyborgs and their battles for justice and world peace, the 00s have retreated to more regular lifestyles. Unable to age, they do their best to fit in to the society they saved so many times before. Joe Shimamura, formerly known as 009, lives the life of a normal highschooler. Life is fairly simple. Unfortunately for the Cyborgs, and the rest of the world, justice and evil are ever changing and ever present.

In a show of force in their own ideal of justice, people across the globe are systematically bombing skyscrapers. Claiming to be led by “His Voice”, people suddenly decide to initiate these attacks, regardless of previous affiliations or beliefs. With no sign of slowing down, the world needed new defenders. The world needed the Cyborgs back. 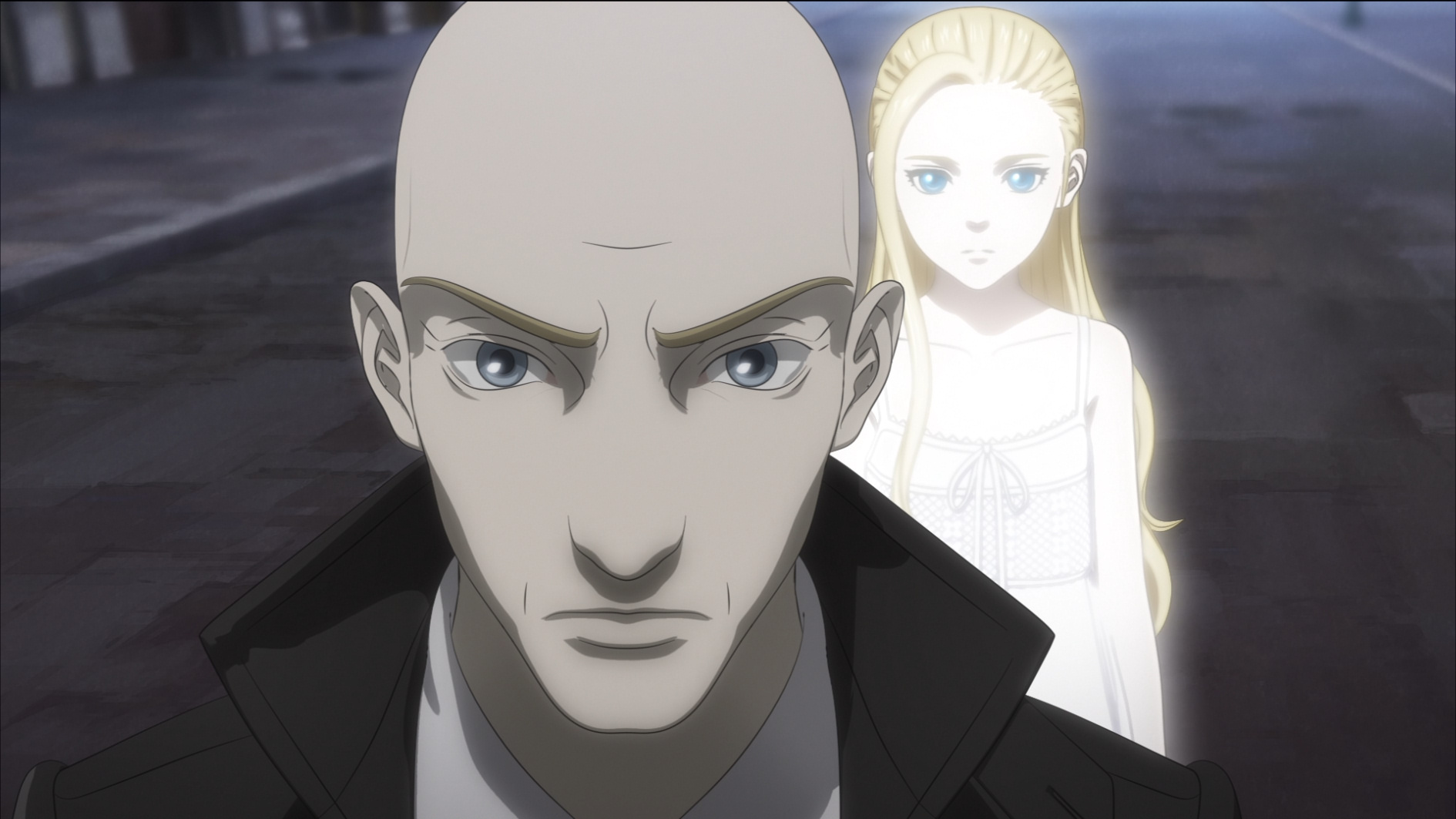 “She’s right behind me isn’t she?”

Living his normal life, with no memory of his past, Joe is forced back into his previous life by his once comrades in arms. Brought together once more, the film deals with the characters own development since their separation, along with how their personalities mesh after reuniting. Over the course of the film, the 00 Cyborgs investigate the source of the attacks and the reasoning behind them.

Once the film delves into the concept of “His Voice”, it takes a sharp, theological turn. In one particular scene of dialogue, characters explain a variety of concepts far beyond fighting bad guys. One notion is that the Voice that people hear is that of God himself, willing them to enforce a twisted form of justice onto the world. Another is that the sheer concept of God itself is nothing more than humanity’s invention, being the only species capable of higher thinking, and possessing elements which are useless on the evolutionary scale, such as imagination. In their own desperate struggle to comprehend the unfathomable majesty of existence, humanity invented God within the brain, the source of all thought. Seriously heavy stuff.

However, with all that being said, the film does base itself on the  fact that the audience has seen prior iterations of 009 Cyborg. The film plays out very much as an addition to the original, rather than a stand alone piece. Characters are not explained in any sort of intricate detail, simply appearing and slotting into the plot. The story itself isn’t bad, it just doesn’t feel complete in itself. 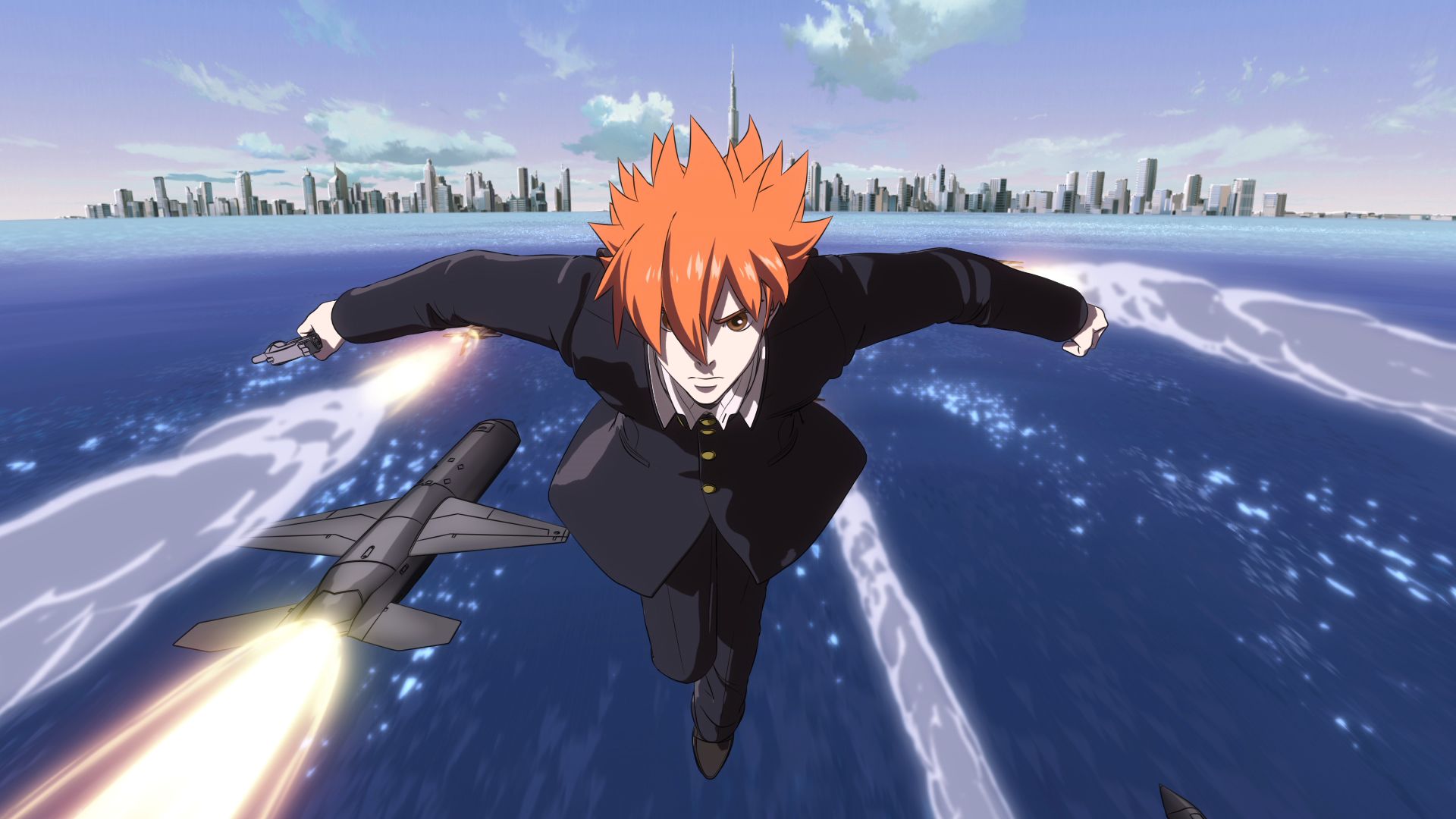 Able to leap speeding missiles in a single bound

Visuals
The visuals are without a doubt the strongest element of 009 Re: Cyborg. Fully rendered in 3DCG, the film presents a beautiful representation of the 009 Cyborg world. The landscapes themselves are large and picturesque. From sprawling cities, with unfortunately numerous skyscrapers, to locations such as Venice, the world looks amazing.

One of the most notable elements of the film is the appearance of the cyborgs themselves. Deviating  from the original designs, Re: Cyborg presents a much more realistic interpretation of each character. This immediately presents the film as a new take on the series, fitting of the passing of time. One of the most notable redesigns is Cyborg 002: Jet Link. Originally possessing a beak-like nose and long spiked back orange hair, his redesign features a face of regular proportions and simple slicked back blonde hair. This, combined with the CG styling, allows characters to be taken much more seriously. 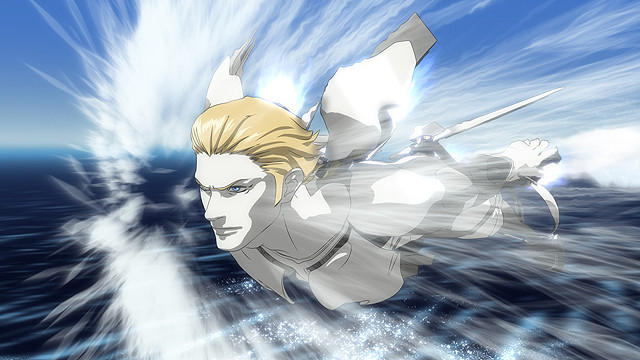 Luckily his name was already Jet

Another noticeable upgrade is given to the Cyborg’s abilities, with each receiving far more visual detail than previously possible. This leads to some cool combat sequences, showcasing the variety of the Cyborgs powers and how they use them to fight, whether it be fire breath or a knee mounted cannon. In the case of Joe’s Accelerator, the film makes use of slow motion. While this clearly expresses the unsurpassed speed allowed by the enhancement, it also amplifies the visual environment. Raindrops are seen almost hovering in place, explosions are shown slowly engulfing those unfortunate enough to be in the area, already stunning scenes made even more awesome.

One of the most visually nostalgic moments of the film lies towards the end, where the 00 Cyborgs don their uniforms once more and fight together for the sake of the world. It clearly expresses the evolution of the visual style and how times have changed…and it’s awesome. 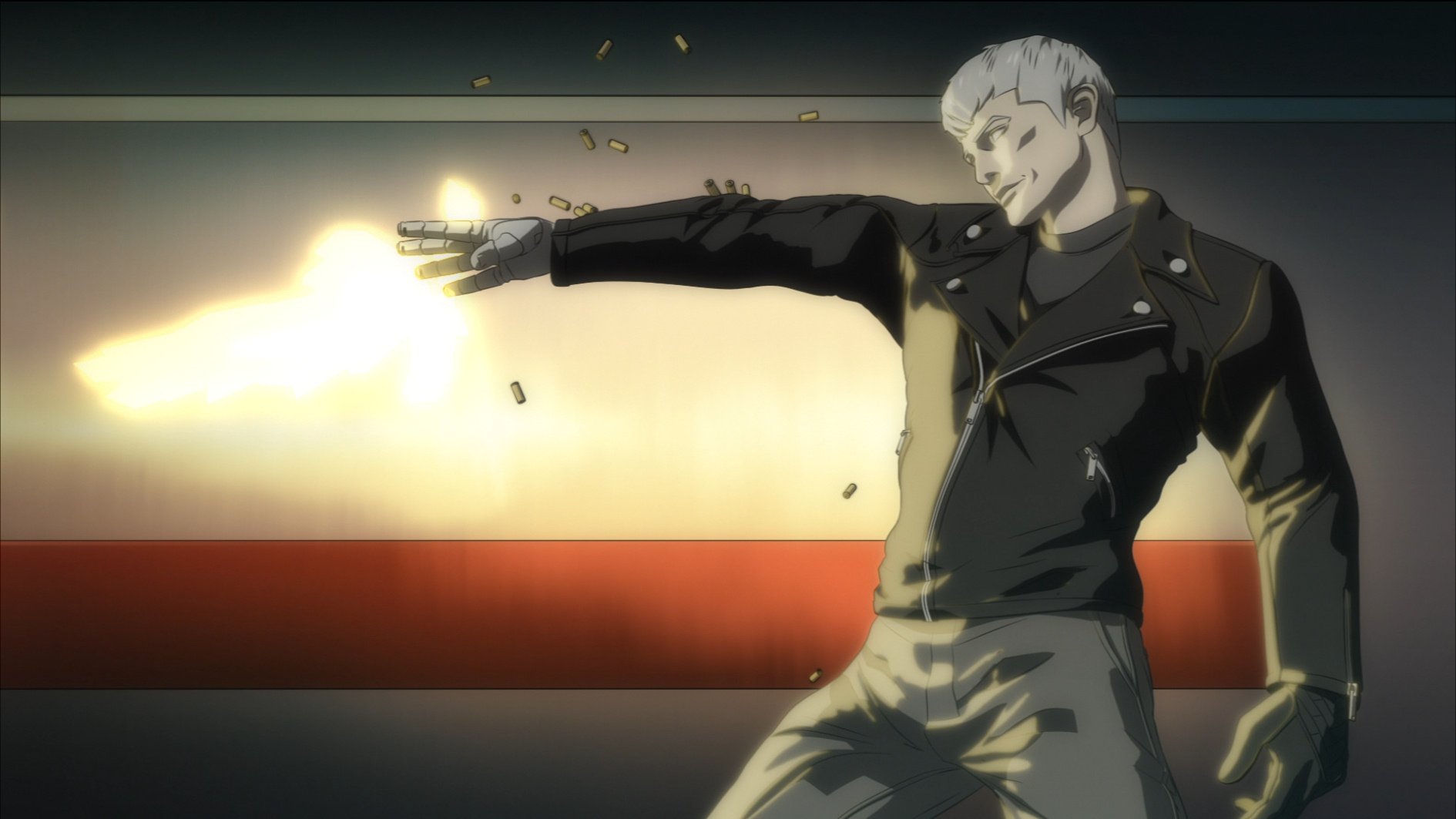 And it shall be known as “The Handgun”

Audio
The soundtrack of 009 Re: Cyborg is very well suited to the visuals. During the more action packed scenes, guitar can be heard along with a combination of trumpets and vocalisation. This gives of a very dramatic feel whilst still keeping a situation tense. Other action scenes take the opposite approach and lacks a backing track entirely, making use of only muffled sound effects. This is generally employed when 009 is using the Accelerator. This, combined with the visuals, clearly depicts the speed at which he is moving, far beyond the rest of the world.

The film also employs numerous sound effects to complete the world. Being Cyborgs, the 00s produce a number of minute, mechanical sound effects when utilising their abilities. Though it may not sound like a major component, the small sounds, like the lens of their eyes adjusting or the pulse of 009’s Accelerator, really add to the film. The voice acting in the film was also done very well. As it stands, the film only has the original Japanese audio. The characters are emotive and 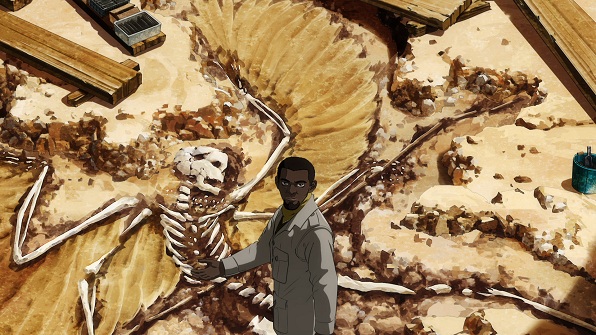 Score one for the arachaeologists

Overall
009 Re: Cyborg presents an interesting story. Take an already serious threat, like attacks on cities, then throw in theological concepts and cyborgs. You’ll end up with chaos. The plot itself is interesting, though it is somewhat confusing as a stand alone title. Certain important aspects of the story were left underexplained and rather vague, leaving what seems to be an intricate plot somewhat confusing. It also bases itself off the premise that the audience has seen 009 Cyborg media before and knows the characters. Once again, while not terrible, it mitigates the enjoyment of newcomers. Not that there’s anything wrong with appealing to stalwart fans, it just feels as if the film is incomplete to a degree. That being said, 009 Re: Cyborg is a beautiful film that discusses some complex issues and will give you something to think about. Also it has Cyborgs with powers. Awesome.