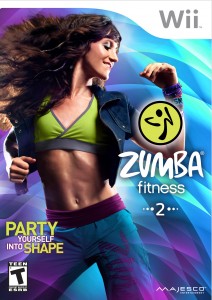 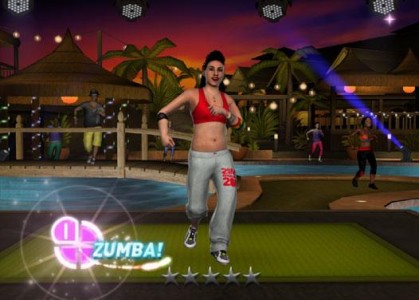 Overview
The Wii may be slowly winding down, but sales are still high and at the moment, the fitness/dance game genre remains high on many gamers’ want lists. Majesco came out of nowhere last year and released Zumba Fitness: Join the Party, which quickly dominated sales charts for the platform and gave everyone a gift they could easily give their spouse, mother, or child. If you are new to the brand, Zumba is a Latin-inspired exercise that has users burn off calories while performing intense dance routines. Classes can be rather expensive, so it’s really not too hard to see why the first Zumba title was so successful.

A year later, Majesco are back with a follow-up in Zumba Fitness 2. This sequel takes everything fans loved about the first title and adds in even more content with new dance styles, a progress checker, and a revamped visual design for players of all ages to easily jump in and shake their booty to. The main question is, are these additions enough to keep the series relevant on an aging platform? Here is my review for Zumba Fitness 2.

Gameplay
If you played the first Zumba title, you should already be very familiar with how to play this successor. Zumba Fitness 2 comes bundled with a snazzy belt that players simply strap to their hip and then slide their WiiMote into a small pocket on the side. This simplistic design allows for every motion the player executes to be tracked by the hip, rather than the in-hand schemes that several of the other dance titles on the Wii utilize. Once your belt is strapped on, all the player has to do is simply mirror the routines performed by the on-screen instructors, where they will then be ranked for their technique and accuracy. I would love to say how complex this makes the overall experience, but to be honest, the whole game is rather fool-proof. I’m a pretty clumsy dancer myself and each time I missed, I was never punished for error and the game simply continued on. Once you do master the art, stars at the bottom will start filling up, making the main objective to mimic each dance to perfection to get the highest rating possible. Some of the hardcore dancing fans may be turned off by the lack of a true challenge, but I can’t really fault Zumba 2 for that as the whole game is meant to be more of a tool to get in shape, rather than an accuracy based dancing game. 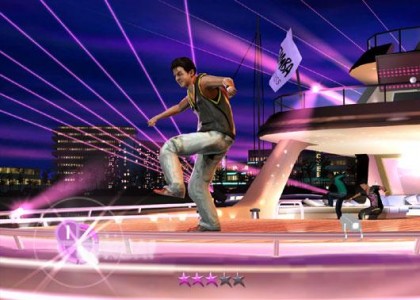 The core of this exercising romp can be found in the Full Class Mode. After choosing the length of a class (which can be either 20, 40, or 60 minutes long), you then are taken straight into the game and must mirror each dance as closely as possible. There are ten different setlists to choose from for your selected duration of class, with each being grouped by intensity. The lower intensity setlists are targeted more towards beginners and start things off slow and easy, medium offers tracks with a higher tempo and amp up the difficulty with faster-paced dance routines, and high intensity is exactly as it sounds and keeps the player constantly dancing and moving for the entire class. These classes can also be customized to your own liking, where the player is allowed to select each track, venue, and overall length of their session. I went in with a bit of an ego and picked the 60 minute class on high, and as I am writing this, things are a bit sore everywhere. I would say that this is a good thing though, as even though the routines can be rigorous and demanding, I still managed to have fun and it never quite clicked that I was actually exercising until sometime afterwards. Up to four players can participate at once as well, so if you have friends that also want to join in, all that is needed is some extra belts and a few bottles of water (trust me, you’ll need it). Like most dance titles, Zumba 2 is a lot more rewarding and enjoyable with more players as well, which makes it a perfect party game as a whole. 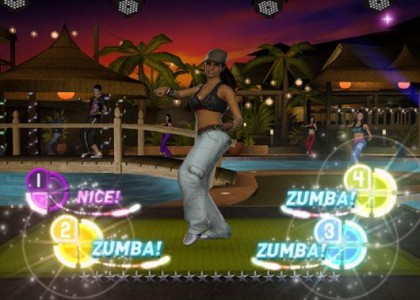 For those just wanting the fun of dancing without the feeling of an intense workout, the Single Song mode is for you. As it sounds, all that is needed of the player is to pick a song and dance along. As for variety, there are 32 different tracks to select right from the start, with each track featuring it’s own particular dance style. Fans of the original Zumba will be familiar with returning styles such as Hip-Hop, Salsa, and Cumbia and with new additions like Bellydance, Latin-Pop, and Bollywood thrown in this time around, each track feels completely different and distinct from the next. Considering that the amount of dance stylings now have doubled this time around as well, this sequel thankfully feels like a brand new game, rather than a mere track change that so many other follow-ups try to offer and then charge full retail price for.

The best feature of the game comes not in dance, but progress. As you perform in classes and single songs each day, a progress tracker keeps record of the amount of calories you have burned, how long you have exercised, your body weight, and how your technique is. These statistics are all tracked well, but if you leave a dance session early your results will not be tallied. As an incentive to keep playing, rewards and extras can also be unlocked for the player’s personal accomplishments. Most of these are just achievements, but some new visual customization options for the instructors can be unlocked based on the number of stars collected. An attire change isn’t huge by any means, but the ability to unlock more content should have a nice appeal to any completionist out there.

Visuals/Audio
Graphically, Zumba 2 has improved miles above it’s predecessor. Each instructor are well detailed and very pleasing on the eye this time around. I would even say that the models in the game may be the best crafted in a dancing game period, as the animations keep up with every step and make mirroring movements at least seem easy enough for any player to follow along with. I’m not personally familiar with the “celebrity” instructors featured, but Zumba followers should have no problem telling the difference between the realistic avatars and their sharp looking attires. As for the backgrounds, there really is none better for the genre. While only 5 venues (such as a yacht or a dimly lit nightclub) are featured, each are full of life and flow perfectly with the music playing. As you perform better, the scene becomes more exciting as well and acts as yet another reward for mastering a specific technique. 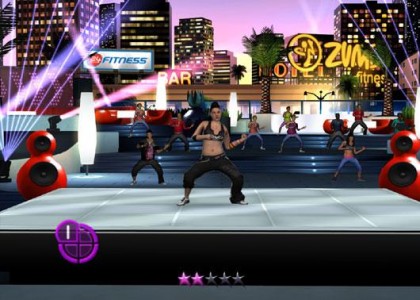 As you would have guessed, the music is the most important factor of the experience. Zumba is infused with a mix of familiar artists such as Pitbull and Nicole Scherzinger as well as upbeat tracks from many international artists. There is Latin-Pop, Hip-Hop, Salsa music, and several other genres included and each feel very fitting to the dance maneuvers the player has to mimic. This is where I must really give the Zumba series credit as well. Most titles in the genre rely on well known top 40 tracks to actually create an enjoyable atmosphere. Zumba Fitness 2’s soundtrack goes a different route and offers lesser known tunes that are full of energy. Even though I hadn’t heard of 90% of the music within the game beforehand, I felt like I remembered them afterwards from this particular title and had more fun dancing to them as a result, even though the genres really aren’t my thing.

Overall
Zumba Fitness 2 does everything a sequel should. There are more offerings in terms of both dance styles and music, the graphics have been revamped for the better, and the gameplay is still as rigorous as ever while remaining easily approachable to all newcomers. The newly added progress tracker also makes a huge difference to the entire experience, as players can now see their own personal growth and form a fitness plan without the need of a bunch of charts or extra paper. If we have learned anything by the huge trend of dance titles this generation, it’s that you can indeed shed pounds while having fun in a video game. Zumba Fitness 2 doesn’t completely change everything we know about the genre, but it does manage to perfect it with it’s high energy grooves.