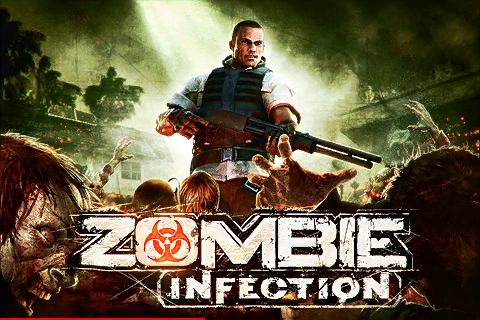 “The infection is spreading and fear is everywhere in this non-stop survival shooter.  Head to South America as a soldier and reporter try to uncover the origin of another zombie outbreak”

Gameloft have outdone themselves with their latest action / shooter for the Apple iPhone / iPod Touch.  Zombie Infection is Gameloft very own take on RESIDENT EVIL 5.  You take on the role of two characters, Damien Sharp an ex soldier on a mission to find his lost brother and Alex Rayne a report looking to find the truth.  The story begins with both Damien & Alex in South America on a chopper flying into the Favela, a location very similar to Resident Evil 5’s African Slum level.  If you’ve also played Modern Warfare 2 this level also looks very familiar.

Landing on the roof you take control of Damien and begin your tutorial.  Zombie infection uses a over the shoulder, 3rd person style camera control system.  The left analog stick allows you to move left, right forward and back.  You can look around by using your other thumb or finger and pressing the middle of the screen to swing the view to wherever you want.  It does take a little getting used to at first especially when using a weapon.  As you’ll need to aim using your right thumb then when you have the shot return your thumb back to the right side to press the fire button.

There is a mini map in the top right side of the screen which will point you in the direction you need to go.  The game is quite linear so you really cant get lost.  Scattered through out each mission are 6 tokens in the shape of a biohard symbol these are similar to the BSAA medals you find in Resident Evil 5.  Finding all of them will result in a reward and also unlock an achievement.  YES Gameloft have incorporated 20 trophies/achievements into Zombie Infection.  To enable this feature you need to login / register a Gameloft live account.  This is shown in more detail in the video review.  The great thing about the achievements are they appear very quickly, as soon as you’ve unlocked a specific achievement it will pop up on the screen instantly.  At the end of each level you’ll be presented with a stats page on how you went, how long it took you to finish the level, how many tokens you found and also how many achievements/trophies you unlocked. 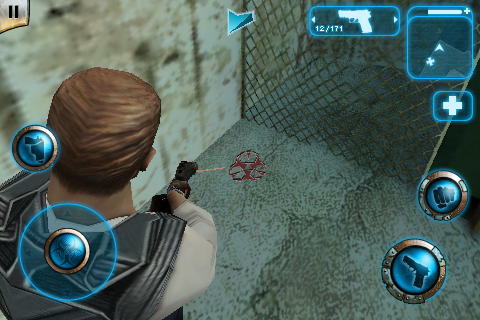 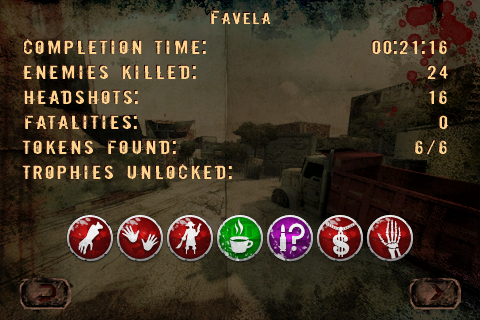 Zombie infection consists of 12 levels, all the environments are finely rendered in 3D so you can feel as close to the action as possible.  Each of the missions can take approx 10-20 mins to complete, with total game play time of roughly  3 hours from start to finish.  Starting off in the Favelas, then moving into a Zoo where you get to encounter all sorts of wild animals along with infected humans and mutants all with their own abilities and skills.  You also get to take down a giant crocodile (But this time you don’t kill it with a gas canister), other levels consist of mines, on a boat, and even a secret lab !!  Well you are on a mission to discover the source of the infection and the plans of the ones who created it so you will always end up visiting a secret lab sooner or later.

Gameloft have added some very impressive voice acting in the game,  every cut scene has voice and even while your in the middle of the action Damien, Alex and even random characters yell out and speak, which is a nice little touch that makes the game feel more alive.

With the video review covering most of the remaining topics, press play and enjoy the rest of the review.

Gameloft have actually accomplished what many people thought wasn’t possible.  They’ve created their very own fun and exciting version Resident Evil, creating a fast, smooth, action packed game with lots of variety in weapons, enemies and storyline.  There a few little hiccups with the control system as it does take a bit of getting used to.  Specific enemies with projectile weapons are way to accurate and can cause all sorts of problems, best bet is to take them out first then go for the rest.  The addition of the brutal and spectacular fatalities is always welcome in a zombie game and are a pleasure to perform as you’ve seen in the video review.  If you’re a fan of the Survival Horror and would like to take a the action with you anywhere you go then,  hop onto iTunes and download Zombie Infection now.  You will not be dissapointed as it is by far the best Action/Survival Horror game on the iPhone / iPod Touch at the moment.

Check out the screenshots of the game below in the gallery