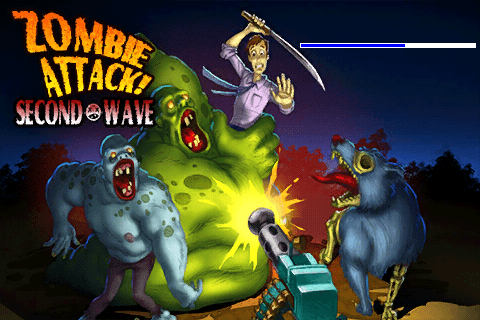 Zombies? Check. Survivors? Check. Ray guns and spinning saw blades? Check and Check. Zombie Attack brings to you a tower defense game like no other for the Iphone. You will be building towers to fend off the un-dead hoards from destroying your base.

Zombie Attack! Second Wave is the sequel to the first Zombie Attack! and is a tower defense game where you defend your safe-house from a never ending onslaught of the undead.

The graphics are par for the course when it comes to graphics. Your main character has at least three costumes to choose from at the start of the game. Though the main character is a bit boxy looking, the zombies are far from it. Each one is designed uniquely with plenty of removable parts.

Each of the zombies is well designed and unique in its own way, with special abilities among them. Though some are more unique than others, each has their own well though design, and suffers differently from different tower attacks.

Though the game plays only from a top down perspective, the levels are quite well designed and usually each has a small feature to vary your zombie battling strategies. From a backyard, to a broken down highway, each area will give some type of strategic effect for your battle.

To start with, there is no story at all in this game, it is just you as a sole survivor, against endless waves of zombies. This is hardly a bad thing of course, as your character has a handy knowledge of building towers to destroy the un-dead with body rending efficiency.

There are seven total types of turrets that are at your disposal. Everything from a machine gun, to a decoy with dynamite strapped to it. Each turret provides a different benefit, whether it be damage over time or slowing down the zombie. Each weapon is given a specific breakdown of damages and effects from each level that the turret is upgraded. Did I mention the upgrades?

Each turret can be upgraded a max of six different times and each one requires a certain amount of points to upgrade. The more turrets of that level you currently have, the more points it will require. These points are obtained from every zombie that you kill from your turrets. As you make it through waves, the points given by the zombies raise to match the wave number you currently are on.

The ever classic zombie is present in this game. The slow shuffling zombie which will come straight for you, or whatever you are defending. However there are five other types of zombies that are thirsty for your blood. These zombies number from the classic zombie dog, a headless cheerleader, to a giant fleshy zombie who can only crawl on the ground after you. Each zombie provides a different challenge and has both immunities and weaknesses to your turrets, so planning accordingly would make things much the easier.

These zombies are also each prone to dismemberment, a loss of head will make the zombie walk around aimlessly, only attacking what it walks into, though each special zombie has a specific body part that can be removed and effectively reduce the speed, damage, or special ability it holds.

There is also the ability to melee these un-dead creatures back to the grave. Your character is equipped with a machete and moving into the enemies will bring your blade down upon them. However you too have a health bar and if killed, will respawn within a period of time that grows longer and longer with each death.

Movement is also controlled by placing your finger on the screen and dragging your finger in the direction you wish to move in. This is to be watched out for however, as where you place your finger is important. Once you touch your screen, the movement joystick if you will, stays in that spot until you take your finger off the screen. This can lead to moving the wrong direction occasionally in a hectic moment.

This is a very well thought out tower defense game, and even though it may not look the prettiest, there is no reason for that to take away from the core gameplay that is provided superbly in this game. Zombies with removable parts + spinning saw blades are nothing to pass up, especially when it comes to us die hard zombie killers out there.