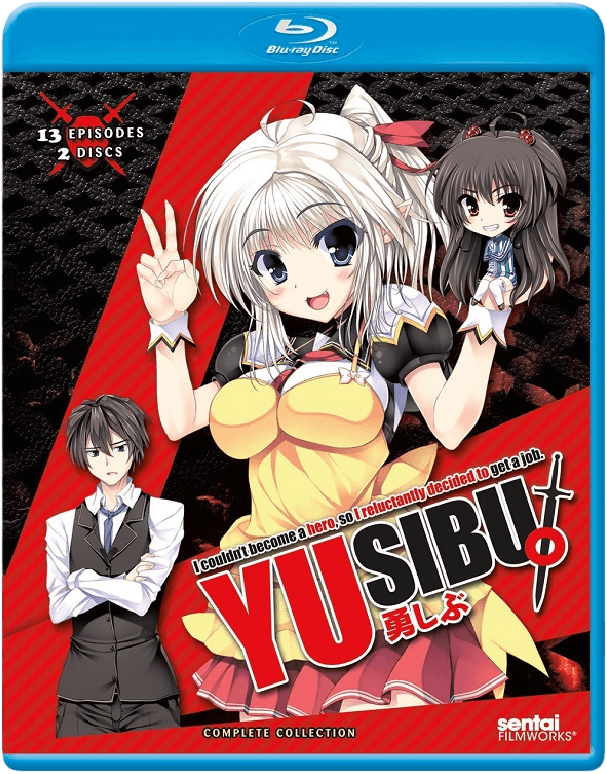 Overview
What happens to workers who find that they are no longer needed? They usually find themselves struggling to adapt to a new job that they are ill-suited for and this is especially true when it comes to soldiers. In what has become a trend of anime adaptations of light novels with ridiculously long names, Yu-Sibu: I Couldn’t Become a Hero, So I Reluctantly Decided to Get a Job puts a fantasy spin on the concept. So now that Yu-Sibu has been released in North America, is this comedy worth picking up?

Story
Fighting against Demons has always been common place in the world and the demon king always seemed to destroy any hero who tried to put an end to his reign of terror. Due to this fact, humanity has established a Hero Training Program where numerous youths are trained from a young age to slay demons and become heroes. Raul Chaser happened to be the strongest hero-in-training in his class but that all came to an end when the demon king was slain and the program was shut down since it was no longer needed. 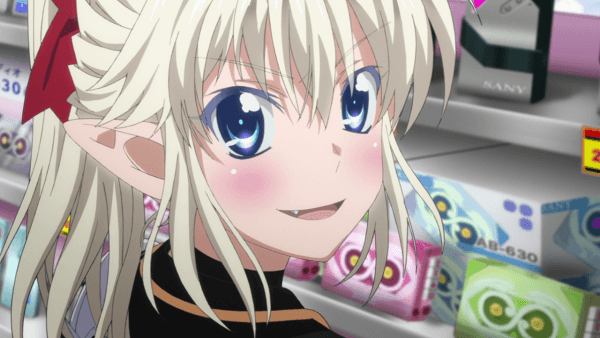 Now unemployed and with no skills other than slaying demons with special finishing moves, Raul found himself lost and struggling to find a job in a world with no need for heroes. After finally finding a job, Raul has been working at Magic Shop Reon where instead of facing off against the undead and beasts of unimaginable terror, he now has to fulfill orders, deal with customers, and other issues that come with working in a retail store. Considering there is no electricity in the world of Yu-Sibu as everything is instead powered by magic that can possibly go out of control and many people using various monsters as transportation, this is far from your standard appliance store.

That being said, this is far from his ideal choice of work and Raul languishes in the store until a new girl named Fino Bloodstone is hired as his junior. While new hires are fairly standard, the fact that Fino is actually the daughter of the now deceased demon king is a big issue as she barely knows how things work in the human world and constantly talks to customers like she is a mid-level dungeon boss greeting soon to be killed explorers. 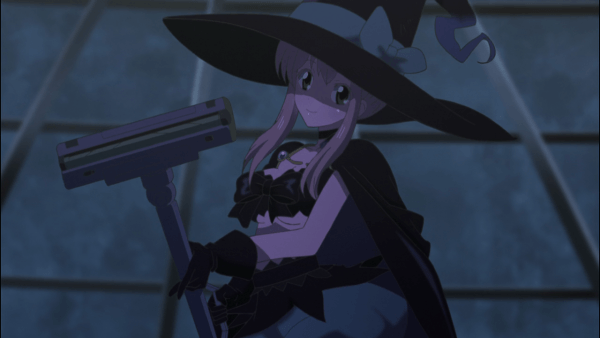 Tasked with training the demon king’s daughter, the failed hero Raul is in for quite a challenge as he teaches Fino the ways of the world. While the idea of a demon king and a hero working together isn’t exactly new, thanks to the focus of the series being on Raul and Fino as well as their interactions with customers, fellow co-workers, and friends Yu-Sibu’s take on a failed demon king as well as a failed hero is certainly refreshing, even if it really doesn’t try anything special.

Most of the cast is interesting and some have a few secrets that are merely hinted at, such as who exactly the store manager is, but of them all the character that shines the brightest in this group is Fino. While she is extremely naïve and unfamiliar with everything ranging from customer service to even wearing clothes properly, her non-stop energy and up-beat personality make her the star of the show and by pairing her with Raul Yu-Sibu creates an great couple that develops over the course of the series as both characters grow through their interactions with one another. 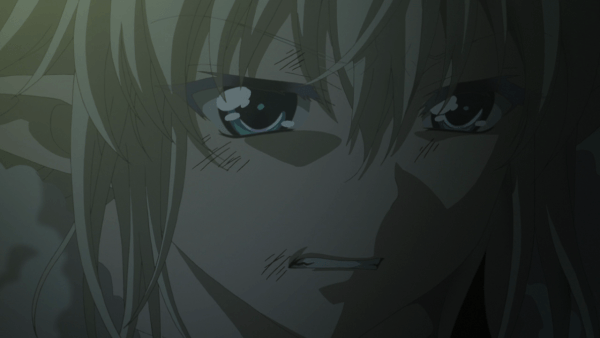 Most of the events involve simple tasks that come from working at an electronics and appliance store, such as repairs, installations, handling down-time with co-workers, and spending time with friends, both new and old, outside of work, things do take a bit of a turn in the second half of the series when a rival big-box store arrives on the scene threatening to put Reon out of business. In fact, the arrival of this rival store brings with it another aspect that forces both Raul and Fino to confront their pasts as they must deal with those who are unhappy with the way the world has turned out since the fall of the demon king.

As mentioned before, thanks to the way that Raul spends so much time teaching Fino and watching her grow, the feelings that seem to develop over the course of the series into something more than simple co-workers feels natural. Of course, being a romantic comedy like this, there are some rival girls that have their eyes set on Raul but their unrequited feelings and Raul’s denseness is played for laughs with few harem antics coming into play. 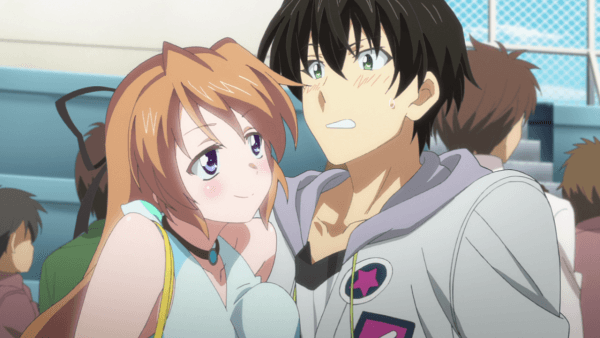 All in all Yu-Sibu gives us a unique enough story that is a lot of fun even if it may have a rather simple sounding setting. Thanks to a likable cast of side-characters, most of which are rather useful and have some stand-out moments of their own, and of course the main heroine Fino, Yu-Sibu is a blast to watch especially if you have a good sense of humor since many of the jokes rely on Fino’s inexperience with human society, Raul’s reactions to her, and plenty of RPG clichés.

Visuals
Yu-Sibu begins with an excellent looking action sequence that masks the real nature of the series and although the overall quality does take a bit of a drop after this sequence, Yu-Sibu still remains an excellent looking series. The background scenery throughout the series is quite impressive and although there are times that characters might look a bit strange while idle or at mid-range, detailed character design and the use of vivid colors makes each character stand out. 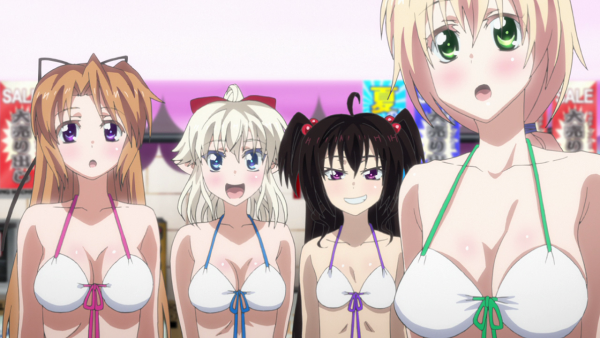 One thing that Yu-Sibu has plenty of it is fan-service. One of the first discoveries that Raul makes about Fino is that she is a girl, which happens after he unzips her top only for a pair of bouncing breasts to pop out. There are plenty of doses of fan-service scattered throughout the series with nearly every named female character being naked at some point in time, though Fino is generally the one exposed thanks to her air-headed nature. Thanks to the design of the characters and the way that the fan-service is handled, anyone who enjoys panty shots or exposed breasts will find plenty in Yu-Sibu.

Audio
Sentai Filmworks’ release of Yu-Sibu comes with only the original Japanese voice track and while this is a bit unfortunate for those who would have preferred a dub, the Japanese voice actors do a great job here. Especially since one of my favorite things throughout the entire series happened to be Fino’s amazing sounding laughter. 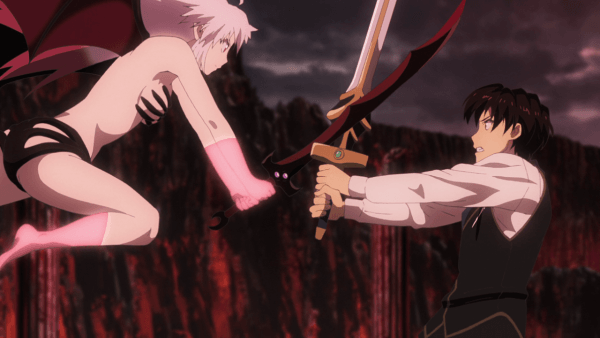 The background music throughout the series is fairly standard and unfortunately does little to stand out. One thing that is inserted often into the background is the ending theme “Sticking Places” by Sphere as they are inserted into the title as an idol group. This ending theme is fitting for the series but doesn’t really stand out while the opening theme “Extra Revolution” by ZAQ is a memorable little song that not only fits but is paired with some goofy but fun animation.

Extras
As for the release of Yu-Sibu, Sentai Filmworks has included the standard extras that are clean versions of the opening and ending theme, disc credits, trailers for other Sentai Filmworks releases, and the OVA which is counted as episode 13. This OVA features Raul’s sister coming to visit him while he puts on an elaborate ruse to try and convince her that he is still a hero, which ends up devolving into plenty of comedic and fan-service heavy moments.

Overall
Yu-Sibu: I Couldn’t Become a Hero, So I Reluctantly Decided to Get a Job may not have the most original concept but it is still an enjoyable workplace comedy with tons of great humor set in an interesting world. It is thanks to Fino’s delightful personality and over exuberance that everything works so well in the series as she is a perfect fit with Raul as these two failures come together in a series that is full of silly comedy and a few serious moments and is far better than its extremely long name might let on.