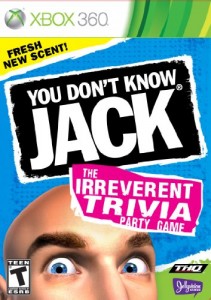 Living in Australia I had never heard of this game before but was introduced to it by a friend who ordered it from Amazon in the US. Apparently it has a huge online following amongst trivia playing PC users and right from the beginning it is clear why. While having a very simple concept the game is made much more interactive through the use of clever sound effects, catchy music and bonus rounds as well as an almost cryptic and often confusing(in a good way) way of asking the questions. Commentated by Cookie Masterson who has a dry, crass and often crude sense of humour, I found myself looking forward to the next question if only to see which celebrity he was going to write off next or what embarrassing life story he had to tell. (Apparently he likes to dance around naked covered in cream.) Everyone from Mel Gibson to the Octomom gets the Cookie treatment, even the player themselves will find themselves at the brunt of his jibes should they be performing below par 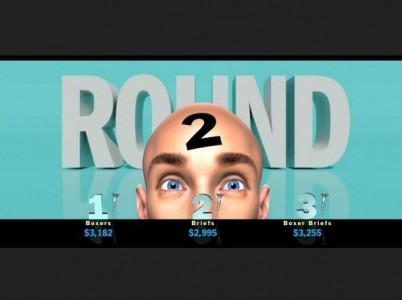 You are a player in a very high paced, interactive game show where the speed of your answers determines how many points you get. The principle of the game is very simple. The disc comes with 73 pre-programmed rounds of 10 questions each. Every round has 10 questions and is divided into 2 halves with the second round being double points. Each round has a different hilarious and sometimes morally wrong sponsor such as Insincere Greeting Card Co. who provide the prizes for each round. The prizes are awarded to players for answering a specific question WRONG not right. Its really not worth answering every question wrong though in the hope you will win a prize they are well hidden and hard to find. An example of a prize i remember winning was a his-n-hers double toenail clipper. Each round also has 2 extra bonus rounds for players to accumulate more money.

The first is called “disordat” where the host gives the players a list of words or phrases and they have to put them into one of two categories or maybe both. I found myself laughing too much to play when i had to decide whether ….. was the name of a Nevada brothel or a style of ranch sauce. While standard questions are scored based on how fast the player answers the disordat round gives a standard $250 for correct answers and deducts the same if incorrect. The second bonus round is after the last question and is called Jack Attack where all of the clues have a common theme. Correct answers are given $4000 and again incorrect answers lose that amount. The only semi-annoying thing is that players can guess as many times as they want on each clue losing $4000 with each incorrect guess. The advantage is you get to hear the snide remarks from the commentator for doing so abysmally such as “Let me guess, a squirrel jumped through your window, knocking over things and randomly pressing buttons choosing answers for you, as that’s really the only possible explanation for why you did so badly”.

Every so often Cookie, the commentator will employ the help of his ventriloquist dummy. Thus the question is asked in such a way that certain letters are muffled and the player has to decipher the question as well as the answer. Cookie also from time to time brings on a friend of his who was supposed to write down the question but always forgets and has to ask it as best he remembers. All of these added features are what add up to set this trivia game apart from the rest.

The game has single player, multiplayer and online modes and i can testify that it is still loads of fun when playing by yourself. The commentator is so engrossing you forget its designed as a competition for more than one player.

One would assume that being a trivia game the visuals and audio would be quite plain. Sure games like Buzz have a cartoony fun feel to them but You don’t know Jack is bordering on manic. It made me feel like i was part of some twisted game show that i couldn’t escape from more akin to a mad circus than a boring quiz show. The audio in this game is non stop, even on loading screens which are minimal and very quick there is constant banter between the commentator and various pseudo directors and producers. I would liken its content to some of the more bizarre radio stations from the Grand Theft Auto series which always brought a laugh when i was driving around the streets with nothing to do. Each question number has its own musical score which you will find yourself singing along to by round 4 or 5. 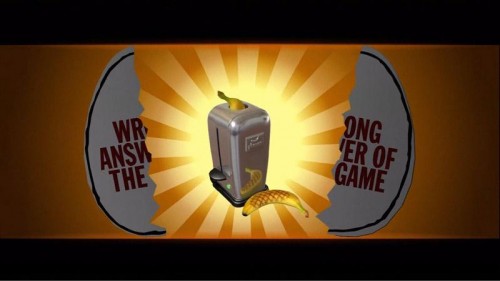 Even though today’s young(er) gamers are wielding javelin and ripper games and dismembering entire alien civilizations there are many adult (specifically sexual) references that some people may find offensive and crude.

This is probably the most enjoyable game of its genre i have played so far. Saying that it possesses a few attributes that some gamers may find annoying. It only has a limited release as the content is 70% US trivia and those not familiar with US celebrities and especially sporting teams must become quite frustrated with many of the questions. Also it hasn’t got a randomizer in the sense that the questions are in the same order and in the same round every time the game is played.  This limits the game to being played only once or well, possibly be enjoyed more than once by someone with a bad memory. In regards to online play, the rooms will be full of players who already know the answers to the majority of the questions making for a pointless competition. These are only minor pitfalls and as the questions are cryptic in nature most are still answerable, its just nice to understand the joke and not be left with a bewildered look on your face as the commentator giggles and cackles. All in all a superbly written game that takes a rather dull and simple concept that makes the player wish they actually had a friend there to play with them. On a final note it is also very cheap, so it packs that extra bang for your buck.

I Give You Don’t Know Jack: