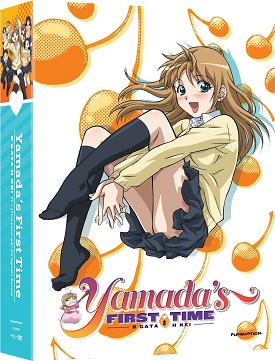 Overview:
In life there are many types of romance, but in anime there are usually only a few genres that are ever explored. There is your standard harem type anime where multiple girls will try to gain the affection of one man and then there is your simple romance between a man and a woman. However what happens when both of the people involved in said romance are both still in high school and one of them is a crazy sex-fiend who has never had a boyfriend before?

Well Yamada’s First Time, also known as B Gata H Kei happens of course. Originally created as a 4-koma manga by Yōko Sanri this anime adaptation has now made its way to North America courtesy of FUNimation. Does this romantic comedy contain plenty of laughs all while delivering a heartwarming story or simply devolve into an anime full of fanservice?

Story:
Yamada has been called one of the prettiest girls in school and now that she is entering high school she has just one goal in mind. Have sex with over a hundred guys before her time in high school is up. Now while Yamada is extremely popular with the boys there is just one problem, she is still a virgin who has a mind as dirty as a gutter and an imagination of a hormonal teenage boy. She has set this goal for herself against her best friend Miharu’s advice but now she needs to find one boy to be her cherry picker and it just so happens she finds him before they even begin their first day of school. 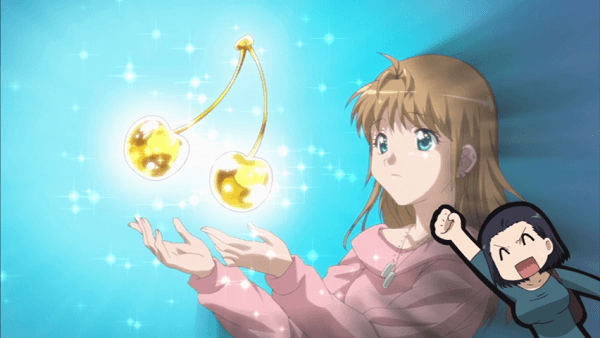 Yamada sets her sights on a young plain looking guy named Takashi Kosuda who Yamada calls a “cherry boy.” The reason for her setting her sights on such a man is simple; he obviously has no experience with sex and won’t make her feel self-conscious about her own actions in the bedroom. The problem with this is poor Kosuda is completely dense and has zero experience with girls. Now if only this crazy girl can stop thinking about sex every waking minute (and dreaming about it when she is asleep) she can try and reach her goal. The journey of a hundred sex friends begins with the first lay, but can Yamada overcome her shy self to get it done?

Now from an anime premise like that one would immediately begin to think that Yamada’s First Time is literally just full of sex and has absolutely zero romance. However this title can go down as one of the most misleading titles ever as it offers a comedic journey full of romance as two people begin to develop genuine feelings for one another and the viewer is along for the ride. 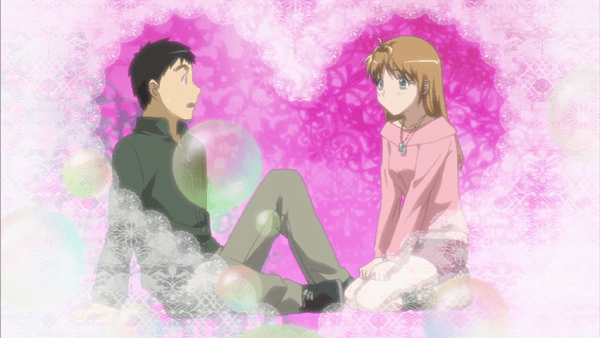 Despite Yamada’s outer confidence, in the inside she is extremely shy and very concerned about what to do whenever she is around Kosuda which means she usually will freak out and scream at poor Kosuda or something hilarious will happen to interrupt them. With all of the obstacles thrown in their way Yamada begins to slowly develop genuine feelings for Kosuda despite her best efforts to remain oblivious to her own heart. This is never more obvious than when her first potential rival for Kosuda’s love appears and threatens to take him away from her and her jealousy exposes her true feelings.

Now while the stars on stage for Yamada’s First Time are obviously the budding lovebirds Kosuda and Yamada, the supporting cast is nothing to scoff at either as each of the characters see at least some sort of fleshing out. Whether it be Yamada’s best friend Takeshita and her boyfriend giving advice from their own relationship or their classmates antics there are laughs to be had in every episode. 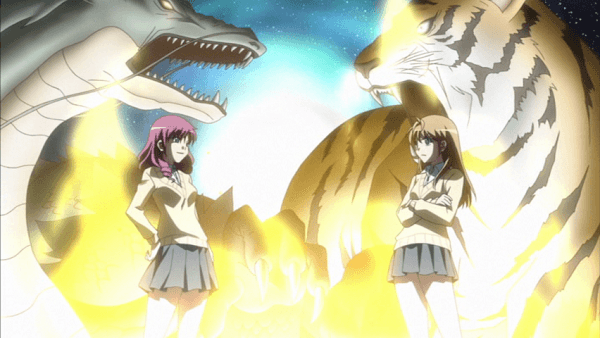 Now that being said, while Yamada’s First Time does contain a great romance story, I would be remiss to not mention the fact that there is plenty of fan service here.  There are plenty of scenes where Yamada or Kosuda are thinking up various fantasies with each other as well as numerous panty shots and a couple of topless scenes as well. That doesn’t even touch on the fact that there are so many sexual innuendos and references throughout the entire show.

Now while this may be off-putting for some, more often than not the various innuendos and fan service are strictly for comedic purposes as it usually is done to highlight the fact that the two characters falling in love are still teenagers trying to figure things out for themselves and often messing up hilariously. So while there may be plenty of fan service and sexual innuendos are fired off left and right the story between a teenage girl and boy finding love far outweighs any negativity that could have on the series.

Visuals:
As a whole the artwork for Yamada’s First Time is satisfactory but unfortunately doesn’t move past that point. While the backgrounds and scenery can be well drawn at times, there isn’t a whole lot to be seen at various points of time. The character design is a tad more pleasing to the eye and fits the series as Kosuda seems like what background character would look like in any other anime, which is sort of the point. Yamada and the other main female characters are well drawn and their out of school outfits are varied enough to avoid repetition and keep the viewer interested. 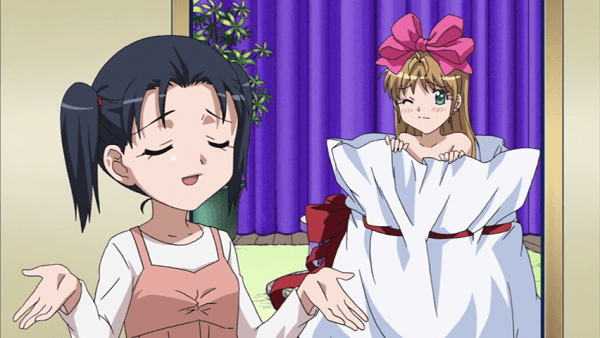 Audio:
Now there are voice actors who simply voice the characters they are assigned and simply consider it another job. However there are also those you can tell who are generally enjoying the roles that they are playing. The voice actress for Yamada, Brittney Karbowski, fits her role perfectly and she provides a very believable role for the admittedly hard to classify Yamada.

Well, if you had to classify her it would be something akin to bi-polar considering the fact that she can flip from being shy and unsure of what to do to angry and yelling the next second. Also considering the vast library of sexual innuendos and various sexual jokes made the English dub a side-splitting good time. 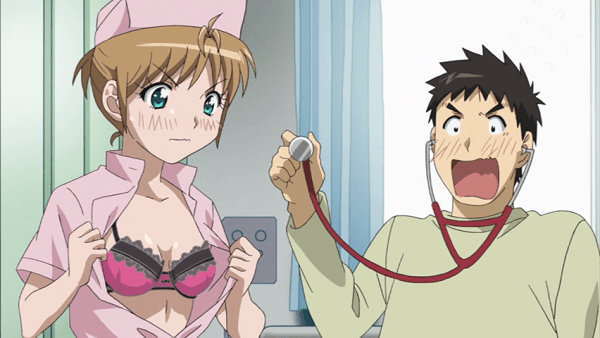 As far as background music goes the show varies in quality but is usually not very noticeable. On the other hand the melodic “B Gata H Kei” is amusing and provides a nice dose of laughter nearly every time it plays. The opening “Ohiete A to Z” and the ending “Hadashi no Princess” songs are both performed by Yukari Tamura the Japanese voice actress for Yamada. Both of these songs are rather cute to listen to and the opening animation matches the song perfectly. The ending song, “Hadashi no Princess” is very melodic and is one that I found myself listening to each time an episode ended.

Extras:
There are a number of extras included with Yamada’s First Time, such as your standard inclusions of trailers for past and upcoming releases from FUNimation as well as the clean textless opening and closing songs. However there are a few extra bonus features that are worth a look as well, such as a three minute long outtake reel that can provide a few laughs and two commentaries. 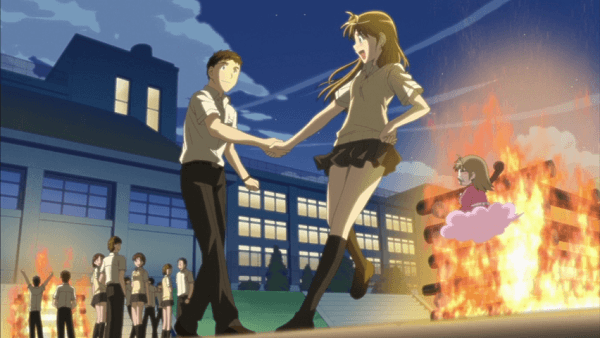 The two audio commentaries provided are for Episode 1 and Episode 11. Episode 1 contains commentary from Director Zack Bolton, Scott Freeman as Kosuda and Brittney Karbowski as Yamada. This commentary is very funny and focuses heavily on the actors work in the roles they provide for the show. Episode 11 only has two commentators and this time around they are both writers for the show, Leah Clarke and Jamie Marchi. Unfortunately this one isn’t quite as funny but does provide a deeper look behind the scenes of making the show.

Overall:
Yamada’s First Time can be seen as one of the biggest surprises you will find all year long. While the idea of having 100 sexual partners may have been Yamada’s initial goal, the romance that develops between her and Kosuda is not only touching but a joy to watch. Sure there is more than a fair share of fan service included with the show but for those willing to look past that, there is an amazing original story to be seen here. With a cast of enjoyable characters and plenty of laughter to be had Yamada’s First Time takes a genre that struggles with cookie cutter stories and takes it for a spin.