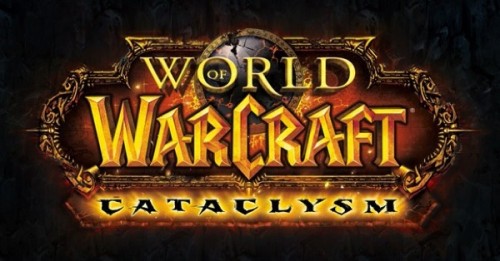 Story
Deathwing from ancient warcraft lore is back, and extremely angry. Agonized by his enemies, he is finally free and wreaking havoc on all of Azeroth. The entire face of the world has changed, and danger is now always present. Can you survive the new Era of Azeroth and stop the destruction caused by Deathwing?

Gameplay
Tons of updates have been added to this game. New looks for old locations, new quests, new quest structures, new enemies to worry about; however, a majority of these updates aren’t even part of the Cataclysm expansion and instead are just part of Blizzard’s massive update to the World of Warcraft that coincided with the expansion. Blizzard has used the new threat introduced in the expansion to completely redesign the way a lot of this game works, and have succeeded brilliantly. New players are introduced to a much more user friendly experience right from the start, and old players get new scenery too look at. Sure, everything is completely destroyed and locations are regularly attacked by giant fire breathing dragons, but this just adds to the fun found within this MMO.

The expansion itself has tons of new things to offer on top of all these changes. The first thing a player notices as they start this particular expansion is an increased level cap. The new level cap is now level 85, and these extra 5 levels create a threat for even the current highest level players. Everyone is now tasked to gain those extra levels and the extra levels succeed in creating even more tension between the higher level players and the lower level players. With the increased level cap comes new quests for those levels, new skills, and new tactics for the players that hit these levels to explore and develop. Cataclysm also unlocks both the Worgen class and the Goblin class. These classes each have their strengths and weaknesses and each will slowly be adapted into the game by other players. Currently the Goblins seem to be to be the better race, with more racial bonuses that benefit the player; however, the Worgen has a few good resistances that can seemingly help in the long run as a player gets to higher levels.

New areas have also been introduced with a plethora of new raids and a bunch of new training locations. Each location is quite unique and a majority of them are actually quite enjoyable. One of the locations I didn’t enjoy as much, but that may be because I was grinding out that last level and grinding tends to sap the enjoyment out of a previously fun experience. Two entire new PvP zones have also been introduced that give the players who have gained their new levels somewhere to fight and compete to see who is better.  I spent a little bit of time in the PvP arena; however, I quickly ran away with my tail between my legs as I was royally destroyed… over and over again.

On top of all this, there is also a new skill and a new guild level up system. Archeology is the new skill and it lets you discover some lore behind World of Warcraft; however, the actual purpose of this skill seemed pretty pointless to me. It succeeds nicely in sending you all over the place to train it, but I couldn’t find any real benefit compared to other skills. Maybe with a bit more time I could find another skill to pair it up with to create a beneficial partnership but it is currently unknown to me. Guilds also have a new level up system. This level up system gives guild experience to a guild who has at least 3 of its members go through a raid or other event. There are a total of 25 levels and each level rewards the guild with a unique ability; such as exp gain boosts at lower levels, or mass guild member revival at the higher levels. There is a cap to how much EXP your guild can acquire in any given day, so progress is incredibly slow. The guild I was in while reviewing this game assisted me in quite a few of the raids to help me get through them faster and see everything the expansion had to offer in a much faster pace than is normal; however, even with all this we only gained 1 guild level by the time I hit 85 (from 80) on my character.

Audio & Graphics
Every single cutscene has incredible voice acting. There is also very nice ambient music that helps create a form of pacing in the game. As an area becomes more dangerous, so does the music. As the area calms down, the music does as well. Music is used well, and creates a better overall experience.

The graphics haven’t changed much from the original. While everything looks different, it is still all graphically the same. There is some new lighting and water effects strewn across the expansion, but overall everything has the same graphics as every other part of the game. World of Warcraft is a pretty old game, and the graphics are slowly getting outdated. New expansions aren’t doing much to update them; however, this could possibly still be a good thing as it will still run on a lot of older computers without the need to regularly update your software.

Overview
There seems to be a whole bunch of new things that came along with the Cataclysm expansion; however a majority of the changes were simply put in place for free and don’t require the expansion at all. If you include these changes, Blizzard’s Cataclysm update is massive and the most impressive to date, but if you don’t it borders on being smaller than the previous expansion. While the content is richer and much more in depth than previous installments, the core additions that are actually included within the purchased expansion comes in a much smaller easy to manage size. Either way you look at it, Deathwing has recreated the way Azeroth is seen; old and new players alike will need to adapt to the changes as they venture out on a new landscape scorched within the flames of Deathwing.

I give the Cataclysm

I have used videos rather than pictures because the expansion is huge, and a few pictures just doesn’t cut it. Both these videos were create by Blizzard.