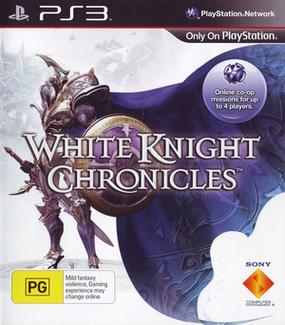 White Knight is an fantasy tale about two kingdoms in the midst of a longstanding war.  The King of Balandor, wishing to put an end to the war, invites the duke of Faria to the castle to celebrate his daughter’s coming of age.  But this celebration is sabotaged by the Maji, a rouge sect seeking to steal the the White Knight, an ancient weapon of war sealed beneath Balandor castle, in order to take over the world.  During the ensuing chaos, a young man named Leonard accidentally unlocks the power of the White Knight as he attempts to save the princess.

With his power, Leonard manages to fend off the Magi attack, but not before they escape with the princess.  With the Kingdoms in chaos, Leornard is entrusted with the mission to find the Magi and rescue the princess.

White Knight Chronicles starts off with a mandatory install as soon as you start up the game.  Once completed the intro movie begins, which is a fine mix of in game engine and FMV which is quite impressive.  Next you’re presented with creating a avatar.  There is a total of eighteen base templates to choose from.  You can spend a lot of time customizing your avatar just the way you like it.  From facial features like, eye color, lip size and shape, to whacky hair styles to bald heads, you can even be over weight or tanked up and ripped with muscles from head to toe.  The choice is all up to you.  I was in there for a while creating the Legendary Monk that is MasterAbbott.

Once completed you’re treated another movie that introduces the players to the story of the royal family and their tragic past, with the death of their queen and their running war with Farians.  Straight away the first thing you notice is the voice acting and lip syncing is a little second rate.  As with most dubbed J-RPG games you always tend to lose some sort of quality and in this case, both the voice acting and lip syncing have payed the price.

With the introduction out of the way your provided with a quick but easy to understand tutorial that explains how to move, use the camera, speak to NPC and also use the Logic stones, which are used to save your game, heal your party, use and store your items and even change the appearance of your character once again.  Communicating with the NPC is very simple as all you need to do is press up and down on the controller and it will cycle through the available NPC that are within talking distance.  One disappointment was all NPC you speak to are not voiced.  All dialog is presented to you via text.  There are quite a lot of NPC within the castle and a fair amount of reading to be had if you want to speak to each and every one of them. 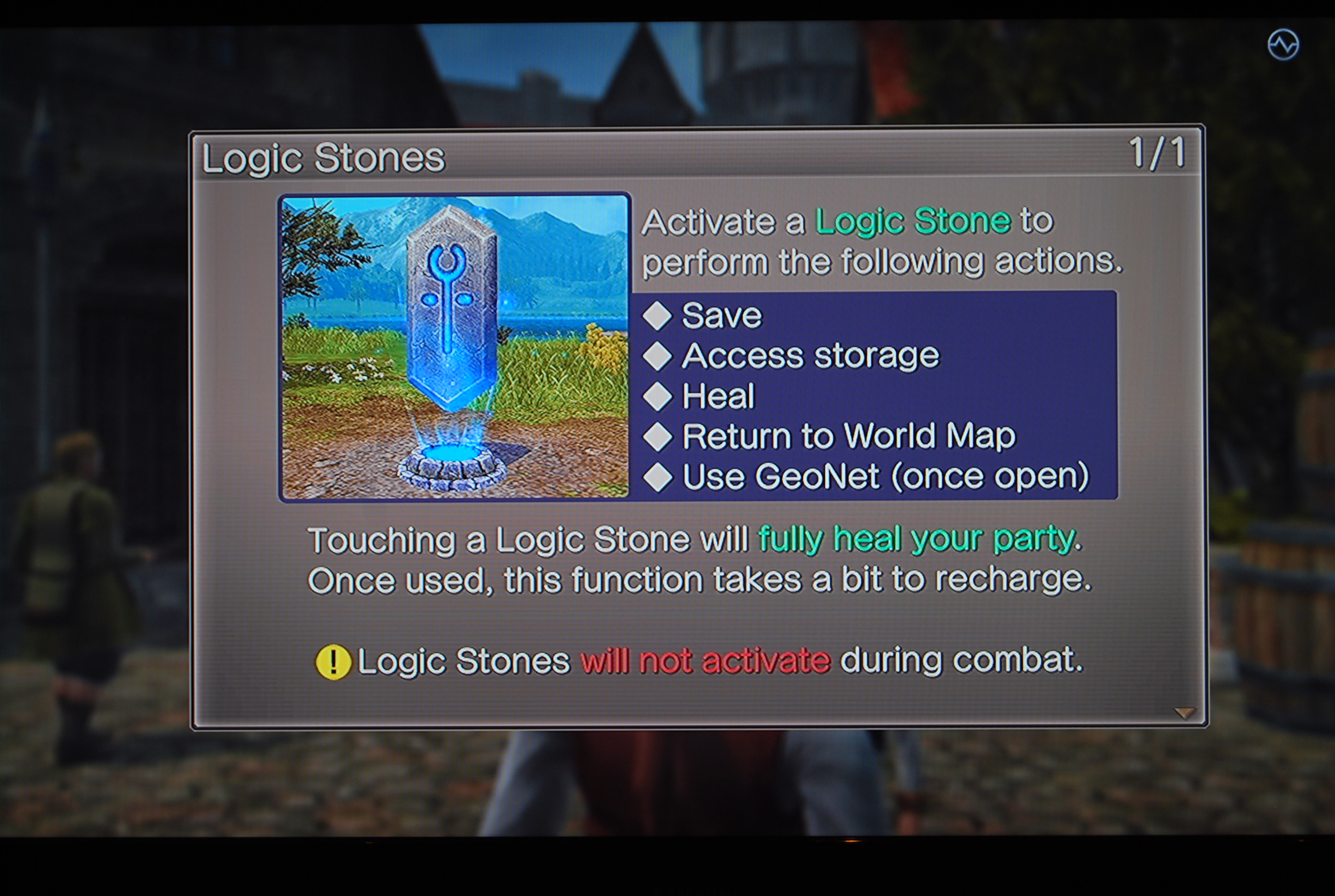 Other features you have available to you are the character emotions, presssing the select will bring up a menu allowing you to choose from a variety of different posses, none of which will get any sort of reaction from the NPC’s in the game.  So there is no need to even bother trying them.  They will come in handy once you’re introducted to the GeoNet Multiplayer features where your actually playing online with real human controlled characters, and then if you feel like bowing, waving, etc you might get a response if the other person on the other side of the world can be bothered performing an action.

Ok let’s get to the fighting.  Your first introduced to the battle system when you reach Balastor Plain, your given a quick rundown with the tutorial pages that appear on the screen.  Initially like most of us, you’ll have no clue what they mean or how it actually works, but time, practice and patience is the key.  You only get to control one character at a time.  You can switch between the party by going into the select menu.  Enemies are visible on the minimap as red dots so you easily try to avoid them or go in for the kill.  Some enemies won’t attack you unless you target them and throw the first punch, then all hell will break lose, if there are other monsters in close proximity they will join in on the action, so be careful not to get overwhelmed. 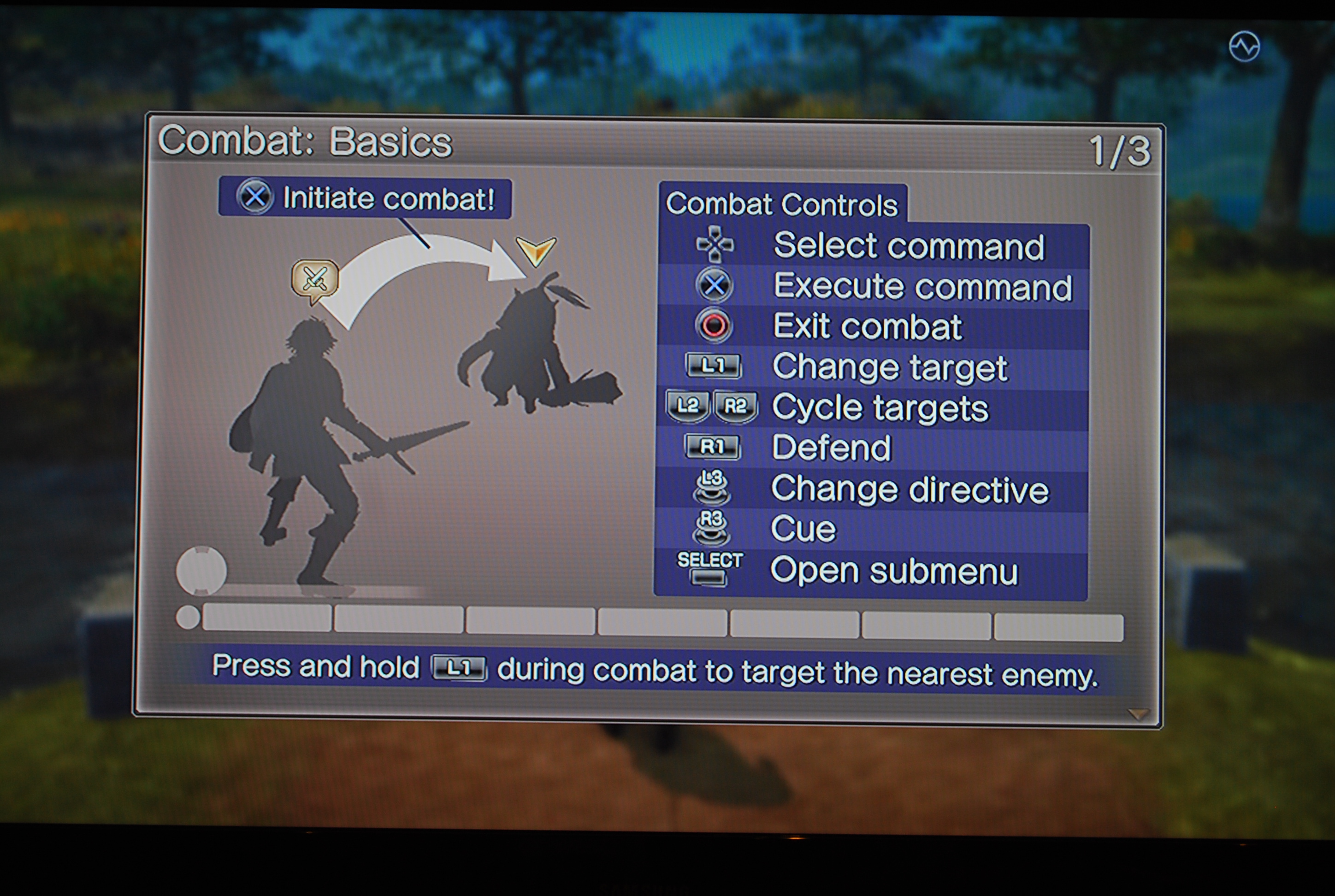 Battle is somewhat turn based but the player can run around the battlefield whilst pick and choosing his or her next attack.  From a simple slash with the sword or casting a fireball the same amount of time is taken to charge up and perform the move.  Once that move is completed a cooling off period is presented in the form of a circle on the screen and as the timer makes its way full circle your character is then allowed to attack once again with what ever move you have chosen next to perform.  It’s not very complicated to get your head around and makes you feel like your actually doing something.  Another cool feature is the battle results are listed on screen, so you’re able to see the amount of damage you just performed or the amount of damage you’ve received from the enemies along with successful blocks, avoids and parry’s.  This is a nice feature and gives you a running tally of whats happened in battle. 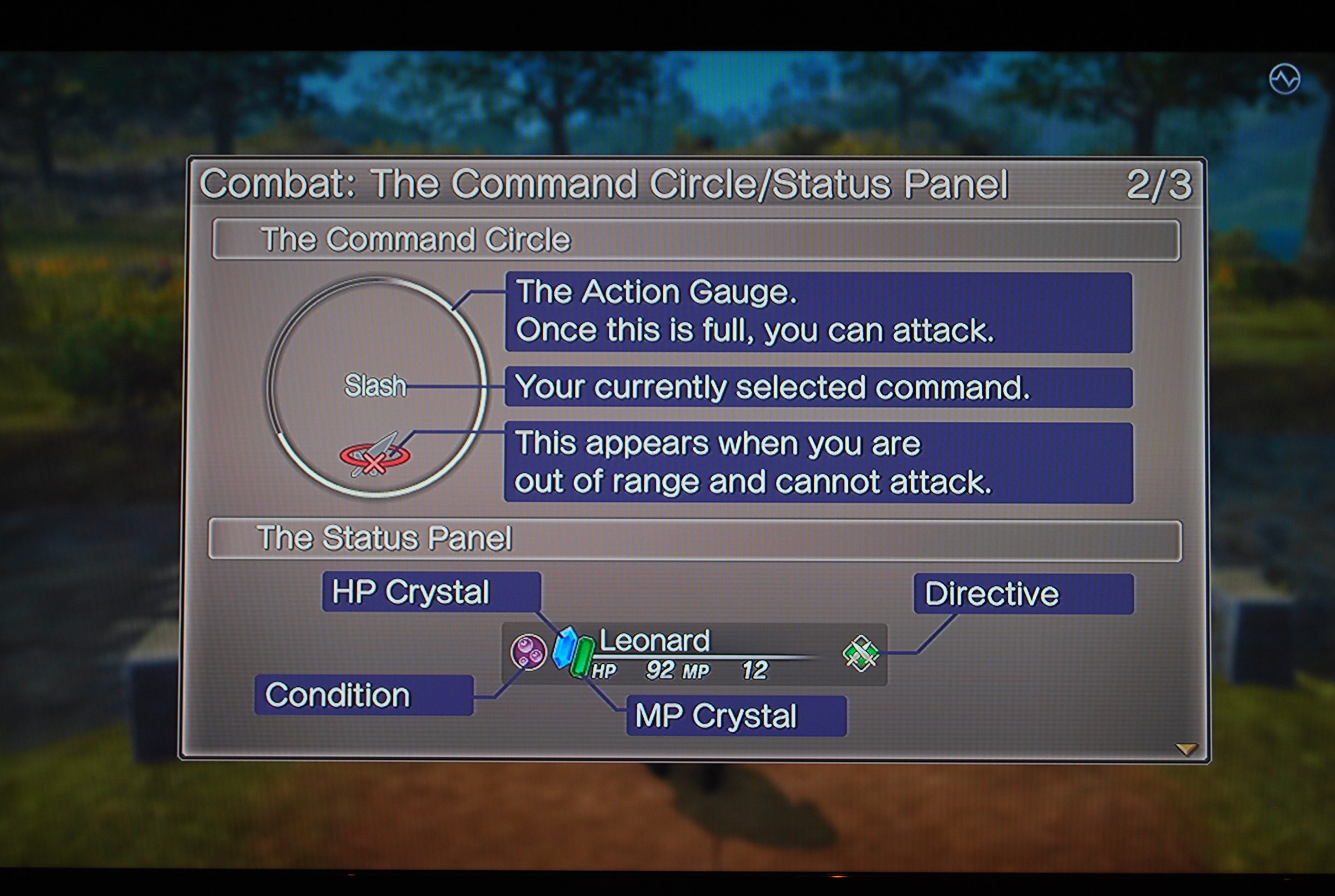 Exploring the initial Balastor Plain could take you as little as 10 mins if you run straight for he goal location or as long as you like.  The map is huge and there are many monsters to kill along the way.  Once you take them out they will re-appear once again within a matter of minutes.  This one one thing I’m particularly not too keen about.  As always there’s an up side and a downside to this.  If you love your level grinding this is perfect.  Kill a set of monsters in an area, move forward a tad kill some more, then come back and kill the ones you just killed, repeat steps 1 and 2 over 3 billion times and after 100+ hours your fully maxed out.  Honestly I personally would of liked if the enemies did not respawn but this is not the case in this situation.  So the only thing you can do is simply run past and hopefully avoid them without taking too much damage along the way. 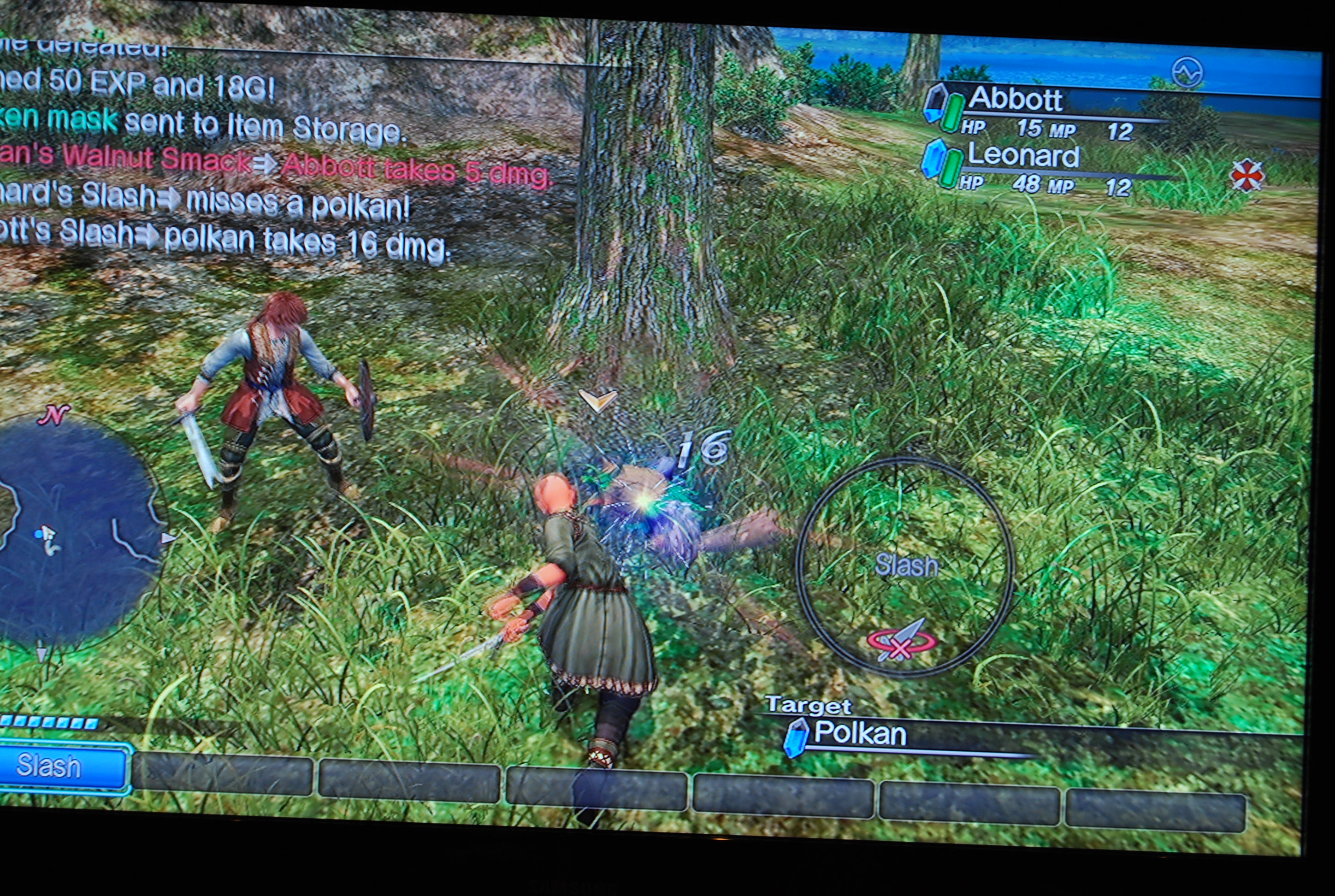 Moving onto the skills, these are learnt by spending skill points once you level up.  You get four skill points every time a character levels up.  One of the great things here is your character starts of with a clean slate, and its up to you to mould them however you see fit.  There is a huge amount of skills to learn.  Characters can specialise in one-handed weapons, two-handed weapons, spear weapons, bow, two-handed axes, staff, elemental magic (offensive) and Holy Magic (heal spells etc).  This is a very effect way of creating and building a character just the way you want.  You also get to build your other characters in the exact same way as well, so you can have characters that specialize only in Holy Magic spells that will heal and remove curses and paralysis and other characters that will cause an amazing amount of damage with two handed weapons.  It’s a very neat setup that works quite nicely. 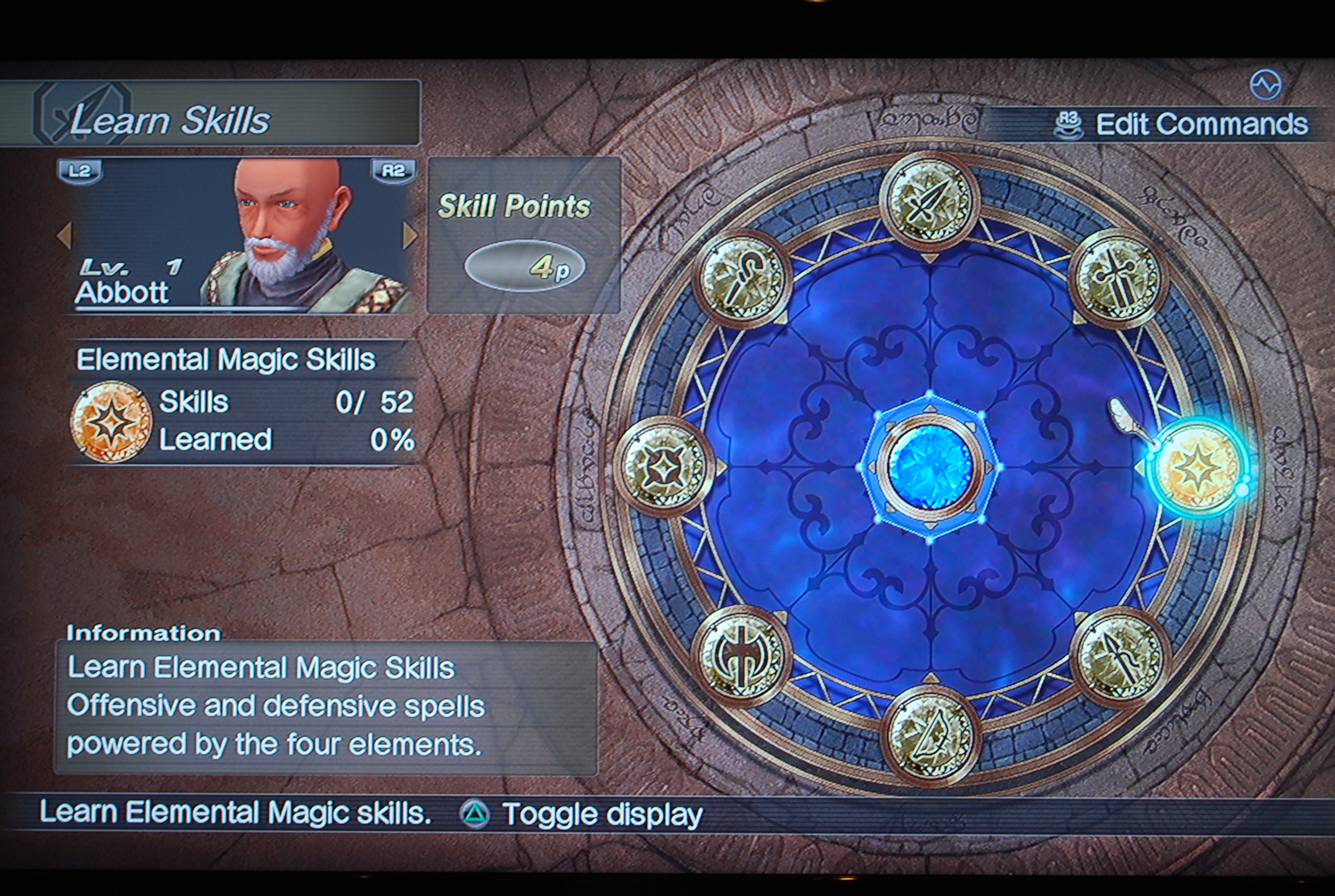 You can spend a lot of time fine tuning your characters skills and abilities and then allocating them to the action bars that appear when you engage in battle with enemies.  This style of menu system is implemented very well as it removes any on screen menu screens that most turn based rpg’s use.  Another excellent feature is the ability to create combo specific attacks.  As you progress you unlock more abilities, one such ability is the Master weapon skill, that will enable you to string together massive combo attacks one after the other.  Unlocking for example the second Master Skill for one-handed sword will enable you to choose three attacks.  Once you create a combo you allocate to a slot in your action bar and it used the same way as your other regular attacks, but in the case of the single attack you press the X button once you take a swing and then your turn ends.  For the Combo attack you press the X button in quick succession and your character will pull off the moves you have chosen one after the other resulting in devastating and sometimes massive amounts of damage on enemies.

Once the early levels are out of the way the world really starts to open up and exploration increases, of course enemies become hard, bigger and certainly very impressive.   This is where level grinding will be required as new areas that open up they will not be a simple walk in the park, but if your a fan of turn based RPG or even RPG’s in general a little bit of grinding will be second nature to you and you will find that you’ve already clocked up over 100 hours of gameplay in no time.

The multiplayer feature called GeoNet is something that Level-5 has implemented quite nicely.  You can do a variety of great things, such as blog your adventures, share pictures, your stories and experiences with other White Knight Chronicle players around the world.  You can also go on four player missions to gather riches beyond your wildest dreams and also show off your good looking character that you created.  I have to admit that the system works extremely well and even though your going on missions that are not storyline specific to the game its still great fun and something a little different.

White Knight Chronicles is a fantastic RPG with a great single player storyline, unique character and battle system which works very nicely.  It will take a little bit of time getting used to, but once you have your head around it, you’ll thoroughly enjoy it.  Along with the ability to play online with others via GeoNet there is a lot of gameplay to enjoy.  Level-5 have done a great job, fans of RPG’s should take a look at it as its something different.

Capsule Computers gives White Knight Chronicles a 7.5 Capsule Out Of 10