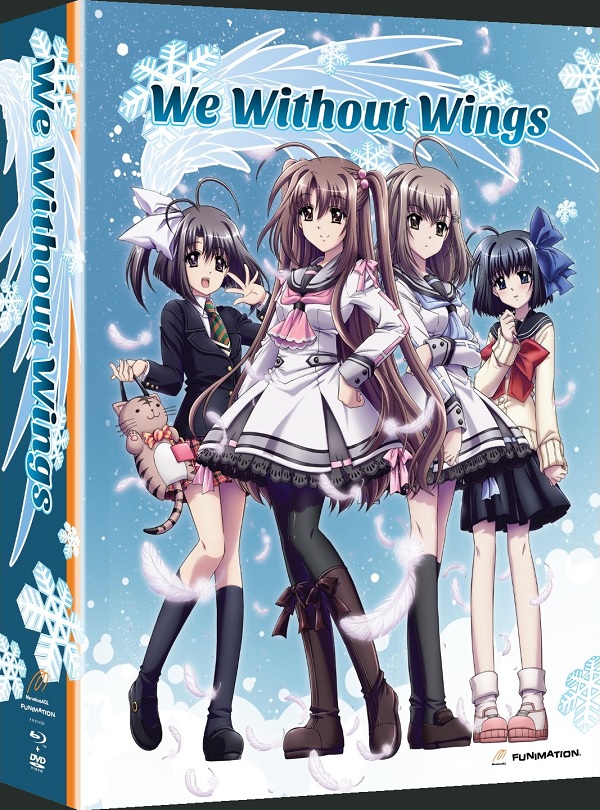 Overview
In recent years, making an anime adaptation of a PC eroge has become something of a rare occurrence as the focus has mostly shifted to adapting light novels.  However for a time many years many popular visual novels were animated and developer Navel has had a fair bit of success with its first adaptation, Shuffle!. Now that the anime adaptation for their third game not based on the Shuffle! series, We Without Wings, has been released in North America by FUNimation, is it worth checking out?

Story
Everything needs a twist to stay relevant and try to keep itself afloat in any industry. In the anime industry it is almost essential that some memorable aspect is added into any story to help it compete against sometimes up to twenty other anime airing at the same time and boy does We Without Wings pack quite a twist that not only makes for an interesting viewing experience, but also one that is so confusing and jumbled up that it almost requires re-watching the first half of the series once the other shoe drops. 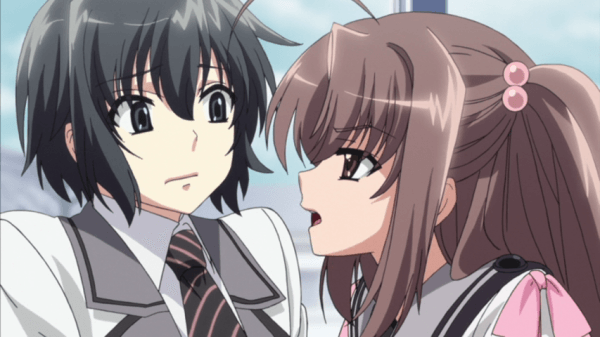 That being said, We Without Wings follows the story of Haneda Takashi, a high school boy who lives a pretty basic life at home with his younger sister and spends his time at school with a fake girlfriend that he has been with for over two years. Takashi has a secret though, and that secret is that he is capable of entering an alternate world where he is a hero capable of defending the land from any number of threats.

It also happens to follow the story of a happy go lucky guy named Chitose Shuusuke who is a real pervert that happily harasses the girls at his favorite café, Alexander’s. After a few days he becomes a regular worker at the café and begins working alongside a new girl named Hiyoko Tamaizumi that just so happens to be the author of a book he is reviewing. 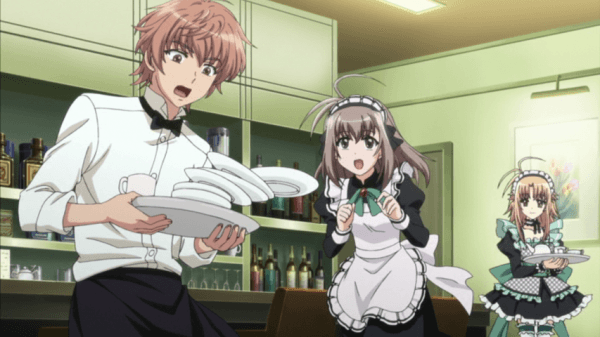 Finally there is Narita Hayato, a man better known as “Drac” thanks to his habit of only coming out at night. Drac navigates the night life with ease as he takes care of any jobs that are thrown his way, but this also pairs him up with a number of unsavory characters as a gang war is about to break out with him right in the middle of it. To top that off, he then becomes entangled with the younger sister of one of the gang leaders, Naru Otori, as he searches for her missing bike and ends up with more than he was expecting.

To go any further into the story of these three people would be entering spoiler territory, but the three do share a very common bond that ties all three of them together. This bond creates something that is not only very interesting to experience but also something that makes We Without Wings turn from a basic harem series into one that actually requires viewers to pay attention and follow along as the series progresses. 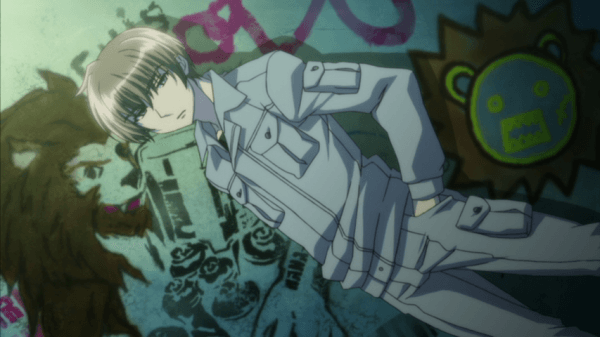 Now We Without Wings makes an absolutely terrible first impression. The first few episodes are a mess of rather huge proportions as it tries to introduce most of the cast and the big players in the storyline but thanks to the fact that the anime boasts a mind-boggling number of characters, many of which have unique quirks of their own to follow, it quickly becomes a mess. Add that to the fact that we have three protagonists to follow and you have a series which introduces itself has issues keeping focus on any major story before jumping to another story with another character.

After a few episodes of this mess, the We Without Wings finds itself a nice and steady pace to introduce viewers to the various aspects of the world while also starting to give hints as to what the connection between the characters is before revealing it entirely a few episodes later. Interestingly enough, this twist is so intriguing that as mentioned before, viewers will probably want to check out the first few episodes once again and keep an eye out for various clues that they may have missed before. 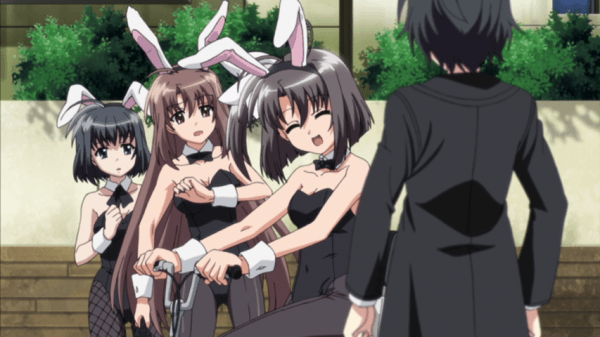 While it may have a trainwreck of a start, We Without Wings quickly comes into its own as it brings everything together as the series progresses. It also manages to find a nice balance between humor and drama, though there are a few snippets of forced humor which fall flat. There are still a few loose ends left over by the time that the series ends, unfortunately with a somewhat generic ‘undetermined’ ending with no specific girl selected, but viewers will likely be pleased by the ending that is presented once this rather enthralling harem anime finishes.

Visuals
While the fact that this anime was adapted from an eroge and also was a harem type series may have been enough of a hint, it is worth noting that We Without Wings features an overwhelming level of fan-service. If there is a female character there is likely going to be a panty shot of her at least once and likely many more times and there are bare breasts aplenty as characters find themselves in various situations of undress. 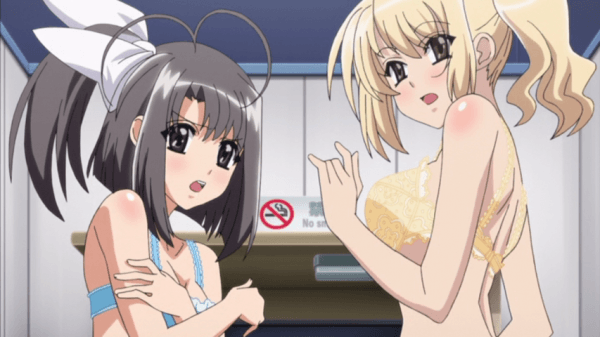 To top that off, there is even a pretty intense sequence of events later in the series which may have a few people checking what show they are watching once it comes around as it tops anything shown before that point in sexuality. That being said, the fan-service is rather nicely handled for the most part as numerous sexy outfits and underwear are displayed and while it is thrown in the viewer’s face often everyone watching this show should know what they are getting into, though a little of it is a bit borderline in some regards.

As far as the actual animation and character designs are concerned. The characters all have a unique look to them, though they do tend to be a bit stereotypical for a series such as this. Facial expressions are nicely handled for close-ups but group shots see the facial expressions usually deform slightly or low quality compared to the rest of the scene. 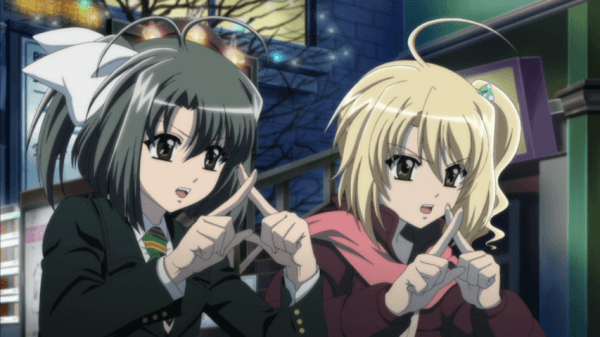 The reason for this is thanks to the fact that the various background scenes and environments that are shown off in the anime are nicely detailed and varied enough considering there are three main characters to follow in the series. Also as mentioned before, with an abundance of outfits for these characters to wear there is plenty of variety on display.

Audio
As is usual with FUNimation, We Without Wings has been given an English voice track to accompany the original Japanese dub. The English cast features a few veterans but also contains a number of fresh voice actors and voice actresses taking on their first roles. Despite this being their first time dubbing, the English cast is nicely handled and there is even a nicely sung English closing song for one episode. 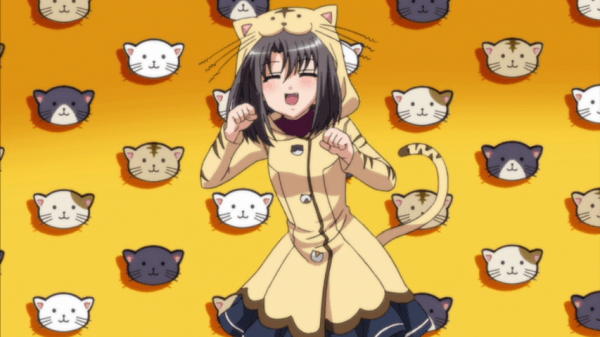 As for the series’ soundtrack, it is generally forgettable except for a few standout moments when major elements of the plot are revealed as the background music is usually is key in these moments. As for the opening and ending themes, the opening theme “Spread Wings” by Miyuki Hashimoto and the ending theme “NEVERLAND” by Miyuki Hashimoto are rather standard fair and generally are easy to skip through, especially since the opening has its fair share of spoilers.

Extras
For We Without Wings FUNimation has provided a number of bonus features, including your standard textless opening theme and closing themes, the US trailer for the series, trailers for other FUNimation products and two episode commentaries. However they have also included an OVA which is simply called 00 and is included in the main episode list despite being simply a side episode. 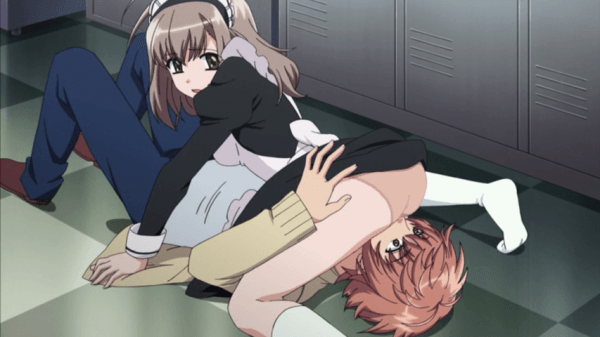 As for the OVA episode, it is titled “90 Percent More Skin” and there is a reason for that. Despite having no real placement in the plot of the series it features almost every female character as they attend a hot spring and take part in nude baths, various massages and lewd posing that is sure to top off any fan service level that may not have been reached in the main series.

Overall
When We Without Wings began, it seemed like the beginning of what was going to be a long haul. However as it progressed it revealed that there is actually a rather interesting twist to everything that leads to an interesting story underneath the piles of panties, mounds of breasts and plethora of characters. While its animation may suffer at times and the story could have been handled better, We Without Wings offers an entertaining anime that viewers have to pay attention to so that they can keep up with all of the events occurring at any given time.