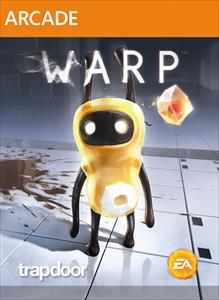 Overview
Warp is an interesting twist of an action sci-fi with progressive puzzles. Our known reality has changed by taking the role of an alien character named Zero. No longer are we subjected to the limits of not passing through walls nor becoming a doppelganger of different objects. By channeling these acquired abilities, there is hope to escape our capturers – humans…

Story
Being a small, orange tinted alien might not startle many observers. This being said my first sight of human existence was not a pleasant one. Covered from top to bottom in suits, the being walked towards me with a strange breathing mask. Scared with little room to run, I was trapped to their devices. Stretched in long white cloth, they began to hurt me under a bright light. Using sharp metal and machines, I quickly blacked out to block the pain. As I woke up I noticed they blocked me in a room and continued to watch closely. 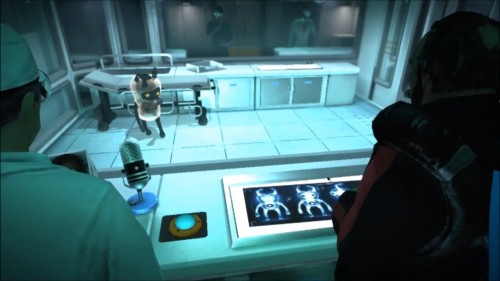 Warp does well to transmit emotions to its viewers, and the story is the vessel for this transference. The recaptured moments above display the intensity that was felt at the game’s beginning. Starting off scared and alone, you soon discover that you are not the only alien that is being tested. Hope stirs within to find other hostages, and combined determination compels you to escape.

One distracting aspect that deters attention from the storyline is the amount of deaths that may occur. Levels become progressively harder to navigate and require pin-point warps that separate life and death. However, each new level begins with a cinematic that re-boosts the story. For all the non-story enthusiasts, you will be glad to know that you may skip all film shorts.

Gameplay
The title gained its name from the most widely used ability, warp. As your alien walks about using the directional pad or left analog stick, you may also teleport a small distance in front of the character. Working as a catalyst for Zero’s additional abilities, warp can provide a quick exit to an unopened door or even a leap of faith across a room littered with lasers. An option may appear to the player to warp into an object. So go ahead with your gut feeling and jump into a scientist! 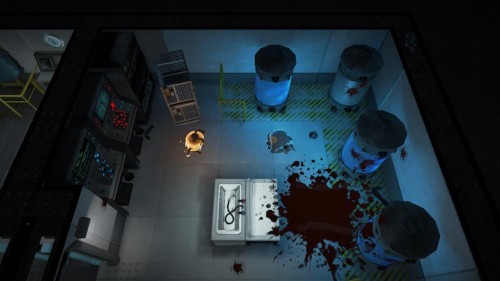 Trapdoor decided to think outside the box for abilities and unique controls. If you decided to warp into a scientist, you will be pleased to find out that you can turn into a personal frag grenade. Wiggling the control stick around enough will cause the body to become severely bloated until it explodes. Blood spatters the immediate area, and Zero appears in the targets last location.

Upon adventuring and obtaining alien artifacts, you acquire the learned abilities: Echo, Swap, and Launch. The skill echo allows the character to create a ghostly form of yourself and move outside of your body within a limited radius. Echo can be used as a distraction to move enemies away from their current location. Swap continues the use of echo by switching places with an object. The echoed Zero is able to swap locations with the original Zero by hitting “A” on an object. Launch can be performed by pressing “B” and using a direction. Note this can only be performed while warped into a barrel or other interacting items. 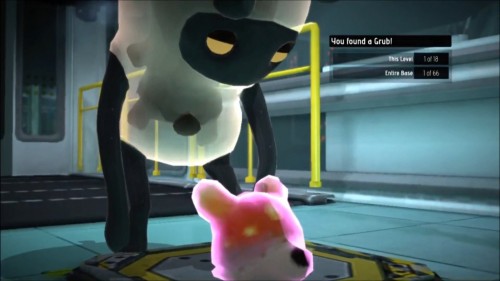 While grubs are used as enhancement tools, film canisters can be found throughout the game as well. Canisters withhold valuable research about the alien species, and destroying these items will damage the human’s research. Finding them becomes less of a problem by gaining the “Show Container” perk in an upgrade shop.

Abilities and perks sound cool, but what about the enemies you get to use it on? Scientists are the easiest opponents to manipulate and most amusing to torture. Often you will catch one running to a corner and huddling in a fetal position. But do not take scientists for fools if there is an alarm system nearby. Upon hitting the alarm, armed guard(s) will target your location with a one shot K.O. With a single shot Zero will fall to the ground and ooze out his orange life-force.

Warping around shots or into objects are useful avoidance maneuvers for most guards. Yet as you move through levels, the scientists will discover Zero’s weakness in water. Whenever Zero touches a fluid, his powers instantly drain and only recover once out. Eventually you will come to meet guards that are surrounded by fluid barriers and are virtually impenetrable by the warp ability. Have a handy barrel nearby? Launch it at him, and I guarantee that shield won’t last long. Be quick to dispose of the body before he recovers. 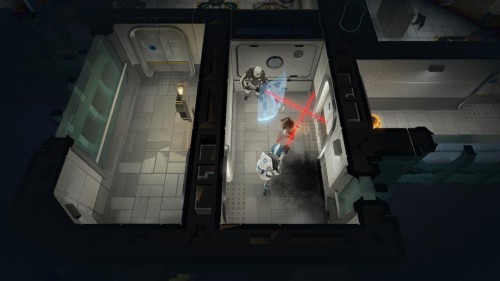 Warp would not be complete without the increased intensity of boss battles. Upon facing the evil Commander for the very first time, you are stuck inside a room surrounded by glowing pillars. Zero has little options of attack at this point, so provoking an attack close to the pillars is the best option. The warp ability can hide you inside barrels, but even reinforced barrels will crumble under the strength of the Commander’s metal arm. Let him destroy the room, and the ceiling will come crashing down.

Beyond the normal gameplay, players can experience a challenge zone where Zero can test out his learned abilities. The very first challenge mission entails warping from platform to platform without falling to your death. Completing challenges within a set time frame will award you with bronze, silver, or gold medals. Additionally, your timed score will be posted online to garner competition amongst fellow aliens.

Audio/Visual
The very first time I warped into a human body was probably the weirdest moment in my gaming career to date. As a planned event, the camera moves horizontal to the warped body while an on-looking scientist is watching the damage unfold. The player is queued to move the analog back and forth to bloat the body and cause an explosion. Blood spatters the room, and the watchful scientist begins to have a meltdown. Seeing this happen once just makes you want to do it again! 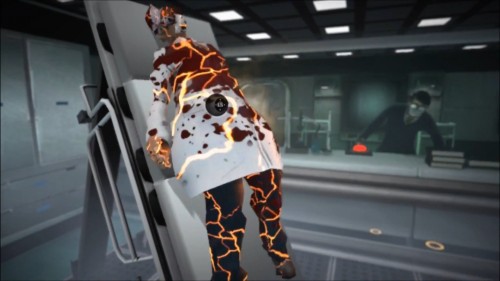 Level design is intuitive and presents new challenges that are visually stimulating. Quarantine may be considered the darkest area of the game and demands close attention. Alien mines are littered across the floor, and upon detonation a bright orange glow with emanate from its position. Purposefully setting off these floor bombs will brighten a room enough to find a safe passage.

During the challenge missions I felt a close bond with a completely unrelated title – Metal Gear Solid VR Missions. The correlation of colors brought back memories of timed trials and a purpose to complete the mission in the fastest time possible. Warp replicated that feeling and provided difficulty that separates the casual gamer from the die-hards. 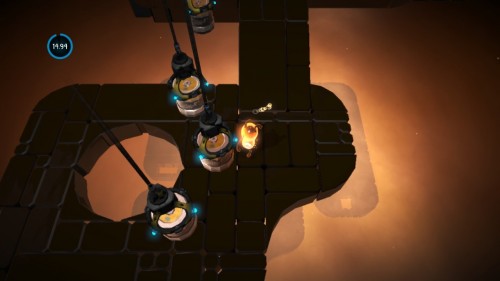 Adding the joyous warping around levels are the sound effects. Whether you hear small alien sounds or human screams, the gameplay is only complimented by their additions. Scientists running away pounding on locked doors makes for heaps of fun, but not as much fun as making them go “splat”.

Overall
Warp delivers a solid performance across the board with minor issues. The storyline is creative and offers an unique perspective from an alien point of view. I felt in tune with Zero’s need to escape and wanted to understand the purpose of his captivity. The curiosity does seem to fade by continuous deaths at a certain part of your journey (laser encased room). However, puzzles require trial and error, and this is a perfect example of perseverance. 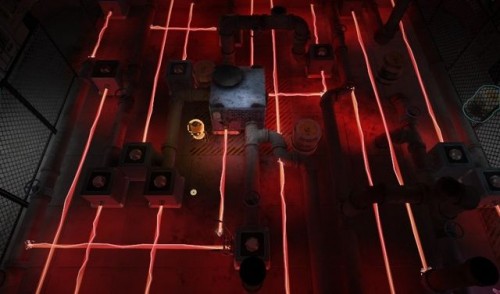 At 800 Microsoft Points, Warp is well worth the cost. Even though the game can be completed in a small time frame, achievements and challenges offer additional gameplay.