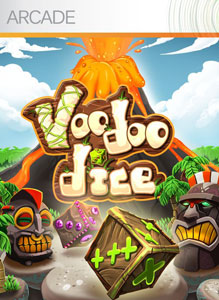 Story
“Roll the dice in a mystical world filled with exploration, puzzle solving, and adventure. Voodoo Dice is an innovative puzzler that challenges you to solve puzzles in unique and interesting ways in a quest to conquer the voodoo universe. Experience an endless variety of game play with 60 single-player levels, 20 multiplayer levels, and four multiplayer modes including Race Mode, Flag Mode, Tactic Mode, and Arcade Mode. Voodoo Dice will win you over with its immersive gameplay and countless hours of Voodoo fun!” [Via Xbox.com]

Voodoo Dice has absolutely no story. There is something about a curse that you need to lift and that you need to collect the gems in order to make the gods happy, but other than that there is no story. The ‘voodoo’ part of the name signifies the surroundings, with voodoo like masks and gods that you must make happy. The ‘dice’ part is for the fact that you are controlling a six sided die the entire game.

Gameplay
Voodoo Dice takes a mass amount of dice oriented puzzles and throws them all into a massive 60 level puzzle game. At first the puzzles are fun and unique but as the game continues the reality of what voodoo dice is sets in. The farther you get into the game, more and more puzzle elements are mashed together into tedious levels. Learning a new puzzle concept is fun and exciting, but you soon learn that the excitement doesn’t last long. When you learn a new concept it just means the future levels will include this concept as well and a huge verbal groan occurs.

The underlying game concept is that you control a six sided die and in order to progress through the levels you must match the top of your die with the top of other dice scattered through the level. This task is actually pretty easy at first, but the developers take this concept and go crazy with it. There are enemy dice that try to kill you, dice that you must use a companion die to get rid of, and switches that you must hit in order to continue. There are a lot of things in this game, but all of it combined is just too much.

You can attempt to beat every level in as little time as possible if you want to. Voodoo time is meant to be a really good time but it is almost impossible to hit that time on some levels. In order to get voodoo time you must beat the level quickly, and when I say quickly I mean taking the exact and quickest route without messing up. The need to memorize and exact route manages to train your short term memory.

There is a multiplayer mode, but this mode isn’t that fun and feels slapped on. There are some interesting concepts, but it ends up simply not being fun. There is race which is exactly how it sounds. In race you race your friends to see who can complete the level the fastest. Flag is basically capture the flag which requires the players to tag the die that holds the flag. Tactics is a turn-based mode that requires players to move armies of dice around to kill the enemy player. Finally arcade is a timed mode where players are required to destroy more blocks in the environment than their opponents.

Voodoo Dice is a puzzle game that requires you to love puzzles. I mean, REALY LOVE PUZZLES. I love my puzzles, but even these puzzles became tedious and boring. Some people may argue that the game is “challenging” but it really isn’t that challenging. You know what you have to do, and a lot of times what you have to do is really easy. Doing the required task is the tedious part. It just ruins the game. 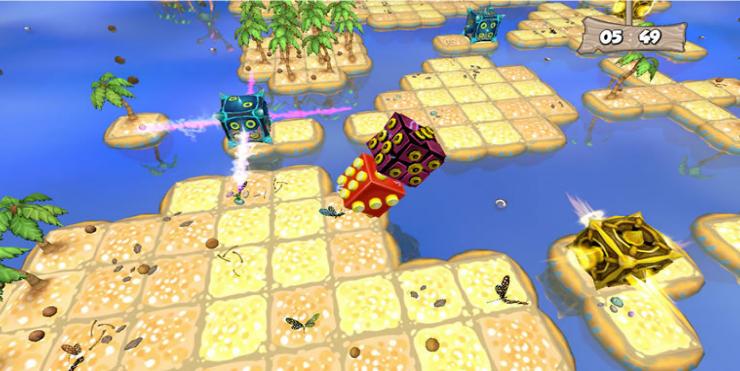 Audio & Graphics
The audio and graphics aren’t that great. Sure the opening music is kind of catchy, but it is quickly forgotten within five minutes and the rest of the game doesn’t contain any memorable music. The graphics aren’t bad but they are pretty simplistic. With multiple skins for your die you can have a bit of customization but not a lot. The menu system requires you to move your die around the field and go to the location marked by whatever you want to do. This menu system is nice at first, but after a while gets extremely annoying as you move from level to level to see what times you can beat or to simply get to your next level after booting up the game again.

Achievements
The achievements in Voodoo Dice are straight forward but not easy at all. Some people may argue that harder achievements leave for a more entertaining time, but in this case that is not true. Beating all 60 levels of the game will take a strong will to start out with, but trying to beat all 60 levels under Voodoo time will require nerves of steel. Sure the best routes on each level will eventually hit youtube and you can just copy the route other people take, but what fun is that?

Overview
Imagine every single block, dice, or switch puzzle you have ever run across in other video games. Voodoo dice takes a lot of these concepts and throws them at you like a crazy mad man. Sadly the game is not that crazy. There are tons of puzzle elements in Voodoo dice, but the overall game is simply boring. I couldn’t bring myself to play more than an hour per sitting, I would play a few levels then watch a movie and then come back to do a few more levels. In order to enjoy Voodoo dice you have to be a really huge puzzle fan. I like my puzzles, but even these required me to fight through boredom just to complete.
I give Voodoo Dice