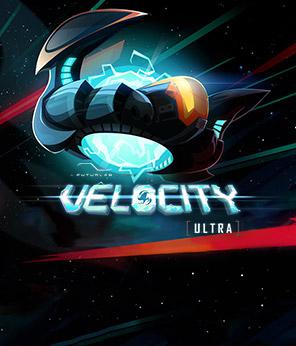 Velocity Ultra is a shoot ‘em up puzzler by Curve Studios (Stealth Inc.) and FuturLab (Coconut Dodge). Players will fly a Quarp Jet capable of teleporting around in space as they rescue stranded crew members, fight their way through dangerous enemies, and solve devious puzzles. The game is currently comprised of fifty levels.

Players take on the role of the lead test pilot for the new Quarp Jet sent out on a rescue mission to save a nation’s stranded people after the death of the star Vilio knocks out all the electronics in Toron in a mighty electromagnetic blast. The pilot must now race against a quickly collapsing star and fight through opportunistic enemies seeking to profit from the misery. 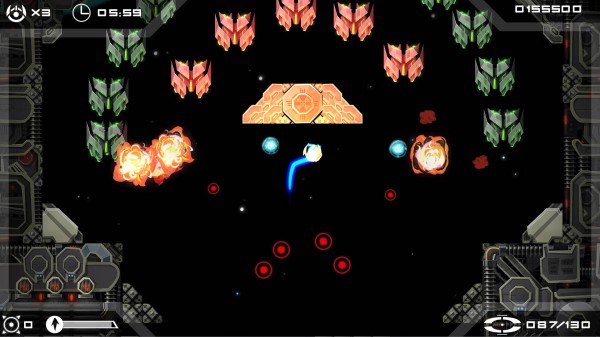 The story is told through small comic based cut-scene between levels. I did not find the story particularly gripping or interesting. The plot mostly gave a vague reason on why the pilot was out rescuing people and why the Quarp Jet received upgrades, but the plot quickly faded into the background once the game started.

Although people would be forgiven for assuming Velocity Ultra is just another shoot ‘em up based on the screenshots, Velocity Ultra is actually much slower paced versus classic examples of the genre like Ikaruga and 1942. The slower pace allows players a chance to react to the puzzle aspects of the game. The Quarp Jet is capable of two types of teleportation, a short ranged teleport around the screen and a longer ranged teleport to bases dropped by the jet at an earlier time. The short ranged teleportation will be used to reach normally inaccessible areas while the long ranged teleportation device is used to solve the many puzzles littered throughout the game. Often times, the puzzles involve hitting a variety of colour coded switches in numerical order in order to unlock areas defended by a laser shield. Players are ranked based on how quickly they can plough through the level and how many stranded people they can rescue. 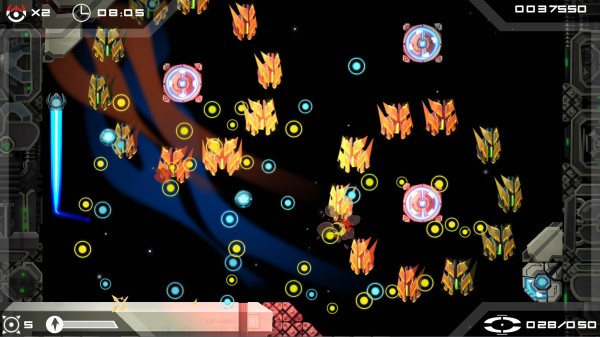 Currently there are fifty levels in Velocity Ultra. The levels break down into a couple mission types, “Search + Rescue,” “Hostile Forces,” “Critical Urgency,” and some combination of the three. “Search + Rescue” is the standard mission type that will have players teleporting around to solve puzzles as they collect survivors. “Hostile Forces” will pit the Quarp Jet’s weapons against enemies while “Critical Urgency” will give players an extremely small amount of time to navigate to the end of the map. The puzzles are not too challenging, the main difficulty comes in doing them quickly with the fewest teleports required. The game takes the learning curve very slow, not introducing the long range teleports until almost half way into the game. I enjoyed the mix of puzzle and shoot ‘em up gameplay, though I found the “Critical Urgency” levels to be the weakest. The game is at its best when navigating puzzles while fighting oncoming enemies. 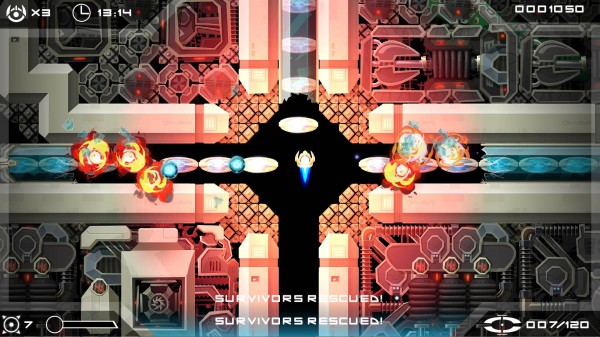 Velocity Ultra is best enjoyed with a controller. The mouse and keyboard will work just fine, though the controller allows for more precise flying while the mouse and keyboard allows for more precise teleporting. I found the short range teleporting felt a bit awkward in the beginning. It took quite a bit of time to get used to, especially with the controller. The teleportation crosshair shoots out from the ship, which was a bit of a shock as I found myself naturally expecting the crosshair to appear from the centre of the screen.

Velocity Ultra’s graphics is a nice blend of retro styling with modern high resolution graphics. Fans of shoot ‘em ups will be right at home with the sci-fi top down graphics. The comics that serve to forward the story in Velocity Ultra are lovely to look at and are frankly, much more interesting than the actual plot itself. 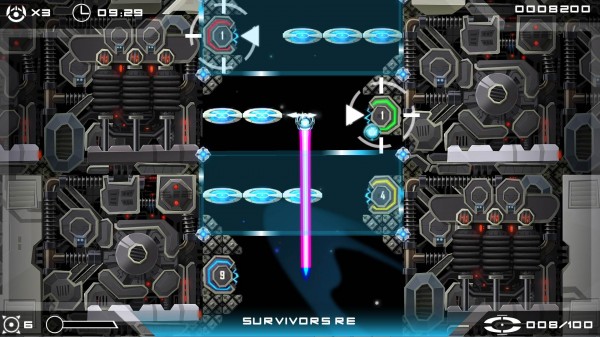 The audio in Velocity Ultra are much like the graphics as they are heavily inspired by retro arcade and shoot ‘em up tracks. They are not chiptunes and 8-bit sound effects by any means, but those of us who grew up on titles like 1942 will feel right at home playing Velocity Ultra. My biggest complaint is the soundtrack is a little thin. There are only a small handful of tracks and I would have appreciated a greater variety of music.

Velocity Ultra is an interesting game. It is the antithesis of the classic fast paced shoot ‘em up, opting for a more thoughtful pace. The game has a great modernized retro arcade feel. However, the story feels a bit like wallpaper than a gripping plot. At $9.99, the game has good replay value for those competitive spirits who desire their names on the tops of leader boards. Those who are looking to play the game once may find Velocity Ultra a bit on the short side. It is definitely worth a try for shoot ‘em up fans looking for a new take on the genre.