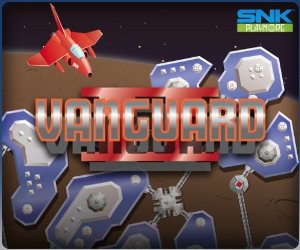 Over the past few days, I have been reviewing a couple of 1980’s arcade games developed and published by SNK (now known as SNK Playmore). Now, I have one more to conduct and I am not disappointed with this one. In fact I am quite pleased with this particular title. I am talking about Vanguard II, a space shooter with great gameplay, retro visuals and nostalgic music. Right now, it is available as a Playstation mini, meaning this can be played on the Playstation 3 and Playstation Portable. If you want something to add to that growing retro collection, then this is a must own. 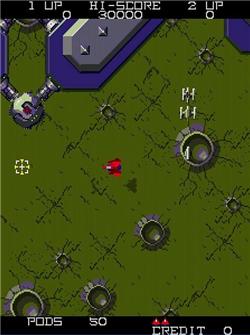 Gameplay
As explained before, this is a space shooter. However, it is not a vertical scrolling space shooter. It has horizontal scrolling and allows you to fly in eight directions. So basically it is quite free-roaming. The objective of the game is to destroy a certain amount of pods (circular structures with a red light in the middle) before going in for the kill. Yes, this is a game about destroying space stations. This is in complete contrast to another game I have reviewed called Alpha Mission, which was released as part of a trilogy of games alongside T.N.K III and this game. Back to the game, you do have a few obstacles in your path. Most of the time they are smaller ships trying to hone on you and move in for the kill.

Don’t expect difficult controls for a game with simple gameplay. Using the directional buttons or the analogue stick will move your spaceship around, but it will be a little awkward when you first play the game. The ship, to put it simply, does not suddenly change direction. Instead, you have to actually have to make a complete turn. Yeah, a little confusing and frustrated somewhat, but it is not a major problem, so I guess I could be doing a little nitpicking. As for the other controls, pressing X will shoot your laser, used for the flying enemies, while pressing O will launch two missiles to destroy the pods, turrets and the central point of the spaceship, similar to Alpha Mission.

Arcade games have a tendency to be a little tough and Vanguard II is no exception. It offers four difficulties: Easy, Normal, Hard and Hardest. Despite the chosen difficulty, there will be times where you will have to put up a tough fight. There will be too many enemies in some instances to outmanoeuvre and too much fire to avoid, especially when you try your hand into destroying the spaceship, as the central point will put up a fight. However, it is not a hindrance to the experience, rather it adds to it, really testing skill and sense of time. Overall, the gameplay, although simple, is rather fun and solid. 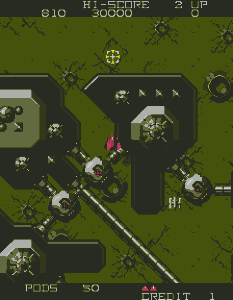 Visuals
What can I say about the visuals of the game? Well, they are those that were displayed when the game was released in 1984. Most of the time, you will encounter an abundance of grey (the space station) and brown (the planet below). Yes, there is no black background, common for space shooters, in this game. The spaceship you control is red, so you won’t lose it in the darker shades of the background. The enemies are usually a mid-tone grey. On occasion you will encounter enemies which alternate red and yellow. To be honest, they look like a flying atom. The layout of each level is different. The central point will be located at a different location in the level. Turrets and pods will also change their position somewhat. They are also quite detailed and take on a distinguished look. Overall, the graphics are quite good for a mid-1980’s game. 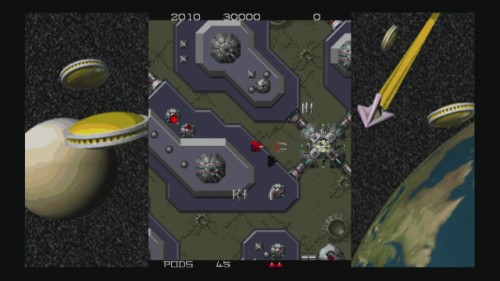 Music
I shall start off by telling you that, during gameplay, there is no background music. It is similar to the old Atari 2600 days where all one had was the joy of listening to 8-bit sound effects. Of course, these are a joy to listen to… if that is your liking. The sound effects are classic. The shot of a laser reminds me of when an 80’s sci-fi laser or plasma gun but toned down a little. The explosions after the missile hits its target reminds me of a brief period of heavy rain before clearing for a nice sunny day. Other than that, there is nothing else to talk about when it comes to music

Overall
I thoroughly enjoyed playing Vanguard II. The gameplay is simple to grasp but it is well designed and can be fun. The visuals retain the retro look, although it can be said that it does look outdated. The music is great to listen to and gives you a sense of nostalgia, especially the sound effects. If you are looking to get a trilogy of classics for your Playstation 3 or Playstation Portable (or both if you do have them), then you really can’t go past Vanguard II, Alpha Mission and T.N.K III. Kudos to SNK for re-releasing these games.