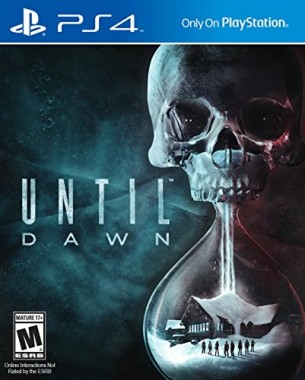 Until Dawn began life as a PlayStation Move exclusive title for the PS3, first announced in mid-2012. Fast forward to August 2015 and Until Dawn has finally released, exclusively for Sony’s next-gen console. The game promises a teen-slasher story that will change based on player choices, similar to other PlayStation exclusive hits such as Heavy Rain and Beyond: Two Souls. Featuring a recognisable cast of actors, motion capture use for animation and a classic horror narrative, does Until Dawn manage to join those two games in the Sony exclusive story game hall of fame, or will the game be forgotten by the time the night is over? Read on for our spoiler free review.

The story takes place across one night upon an isolated snowy mountain on the one year anniversary of the Washington sister’s death, which can be said was partially caused by the group of teenagers who are now regathering at the cabin lodge to try and have some fun and put the events of the past behind them. Of course being a horror game the night isn’t going to go smoothly and the teens soon end up spending most of the night trying to survive whatever comes at them until dawn. 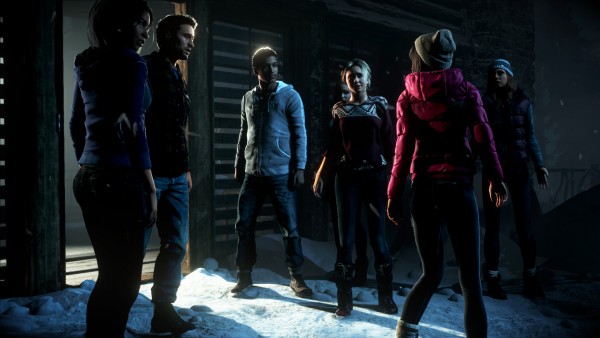 Get a load of this good looking bunch.

Taking clear inspiration from classic horror film franchises such as Scream, Saw and Friday the 13th, fans of the genre will recognize and love the story presented here. Cast of stereotypical teenagers with the males only concerned with how they can score, check, creepy cabins in the wood, check, masked psycho running around terrorising said teenagers, check. Until Dawn knows what it is and it aims to achieve the highs of the genre, to which in my opinion it definitely succeeds.

The characters and the setting alone are obvious genre tropes, but that doesn’t mean they are not enjoyable. Sure you have the stereotypes that are meant to elicit certain emotions from you such as the bitchy girl you love to hate, but most of the characters do evolve slightly over the story giving you a chance to see some other facets of their personality.You probably won’t care about each and every character by the end of the game but you will surely care about some of them enough that it will get your heart racing whenever one of them is in a dangerous predicament. 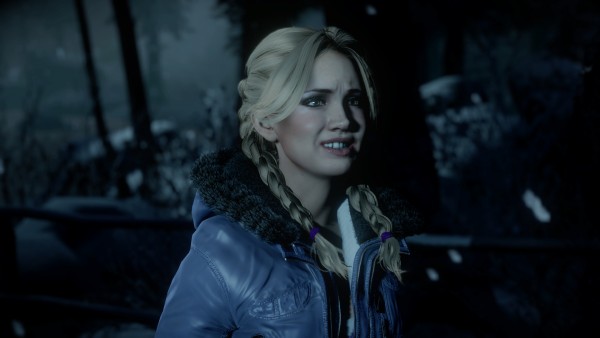 The game’s air of mystery, particularly surrounding the masked person and the psychiatrist are perhaps Until Dawn’s greatest achievements, with great twists and turns but also enough dropped hints to allow savvy gamers to solve the mysteries before they are revealed. The proceeding arc after these mysteries are solved is a little weaker, however has some interesting lore and character addition behind it all which ties back into the main plot very nicely.

In terms of horror, the game definitely delivers in the frights department, even if most of them are achieved by cheap jump scares (I’ve never been so scared by a pigeon before). They do get a little repetitive but it makes it really hard to relax knowing another scare could be coming at any moment which is a great way of keeping up the tension. Those of you with a PlayStation camera can enjoy being snapped each time a moment catches you off guard in a nice extra feature. 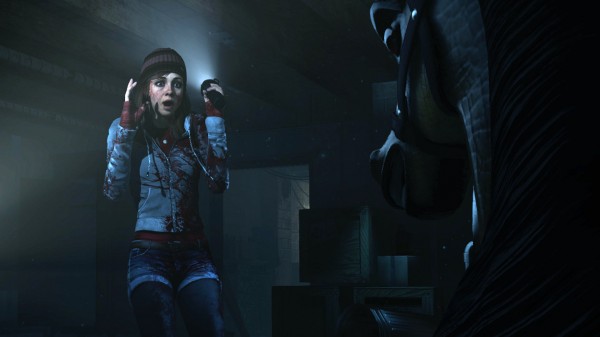 You’ll be making a similar face at some point in this game.

So how does Until Dawn go with letting you alter the story with your own choices and actions? After playing through the game and replaying a number of the games chapters, I would say that your actions definitely have a large impact on the game. Some choices you make can lead to instant differences in the story while others, such as a continued animosity towards another character may build up over time before their effects are unveiled. Your choices here definitely feel utilised and will often play a factor in what characters live or die, what characters are present during certain chapters or if you will even get to play those chapters at all.

The journey is most certainly altered by your choices. Where I’m disappointed by Supermassive games is how your actions tie in to the game’s ending. Considering the game’s multiple trailers showcased so many paths all with their own ending segments, it saddens me to say that the differences between the game’s ending regardless of the journey are minimal at best. It’s disheartening to see a lot of variance during the games chapters only for all of that to basically meet back in the middle to the point where everyone’s ending experience will essentially be the same, especially when similar games such as Heavy Rain and Beyond: Two Souls managed to have so much diversity across their many endings. 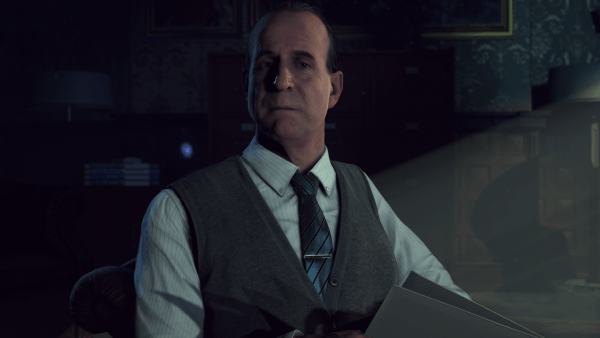 Dr. Hill will see you now.

As a more narrative based game the gameplay here is rather limited. You take control over one of the eight teenagers and move them around the environment. Some of the environments are very linear pathways while other locales allow a lot of exploration which often results in finding a new totem or clue. The fixed camera can be a bit problematic here as obstructions can get in the way and the right stick that you would expect to be able to control the camera with, is unfortunately often tied to poorly controlling a near useless flash light. Characters also struggle to move around the edges of the environment as well, another annoyance as objects are often placed along them.

The collectibles you find offer nice additions to the story and even impact the main story itself on a number of occasions as characters. Among these collectibles, which you are guided to by a small gleaming light, the Totems are perhaps the most interesting, giving you a vision into the future that can really change the way you play if you don’t like what you saw in the vision. Not all visions are bad and some offer some useful guidance that can lead to a more positive result in your play through of the story. 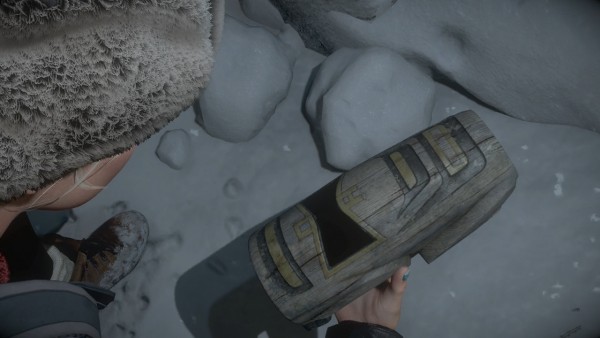 In some more action oriented scenes you will have to deal with quick time events which can be rather unforgiving if you’re not paying attention as they’re not on screen long if you opt to take the more riskier paths. Pay attention though and you should be fine.

There are two control schemes available which can be switched up at any time from the menu, traditional and motion based. To be honest both control schemes suffer from a few problems, particularly the motion control scheme. They are both serviceable and won’t really detract from you ability to play the game, but it’s annoying when you try to turn over a totem with the right stick or by awkwardly twisting the control and nothing happens on screen. Holding L1 to perform a fast walk (if you can call it that as it’s only a fraction faster) while trying to move with the left stick is also awkward and I don’t know why this wasn’t mapped to R2 instead. 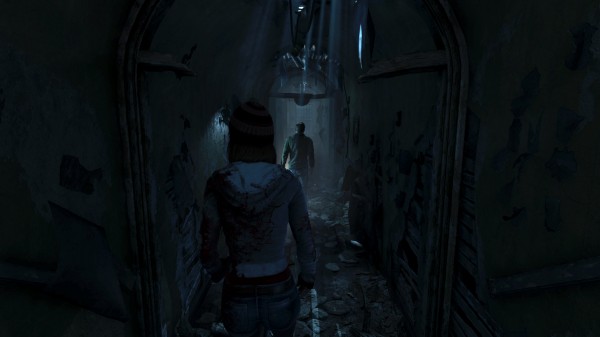 Thanks to the PS4 controllers inbuilt gyro sensors the game can challenge you to hold that controller as steady as possible or else suffer the consequences. These ‘don’t move’ sections are pretty thrilling and will definitely get your heart racing in what is one of the most immersive and unique experiences of the game. Some players on message boards have called it overly sensitive, but I can’t say I ever felt cheated when I was punished for moving.

Although Until Dawn started as a PS3 game there is no sign of that in the games graphical department. Character models look great and are well animated (for the most part). The environments look fantastic especially when paired with the game’s excellent lighting that allows for dynamic shadows and highlights. It all comes together brilliantly to create a truly creepy atmosphere that definitely delivers on the horror film vibe the game strives for. 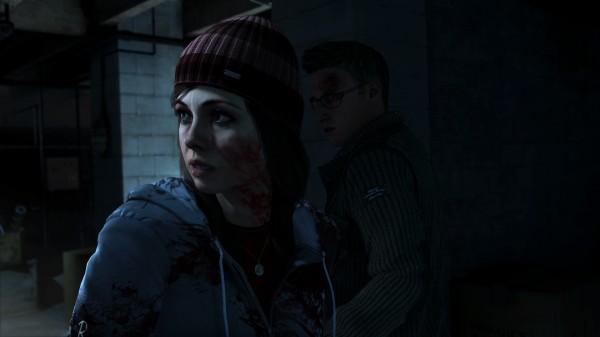 Graphics are getting scary good.

Unfortunately, the frame rate can not just hold up here and it’s a real shame. When the game is running at it’s baseline 30FPS everything looks fluid, however drops below 30FPS are all too common and really ruin the immersion as animations become choppy and the voices no longer match up with the character’s mouths. It really puts a dampner on the entire experience, enough to lose a point in this review but not enough that I still wouldn’t recommend the game to people.

Thankfully audio isn’t affected by frame rate drops and the creepy playing of the violin, the constant blizzard in the background and all the sounds you would expect to hear in a horror film are present here in 5.1 surround sound with crystal clear quality. The score really lends itself to the genre and if the game’s creepy environments and tight camera angles didn’t have you on edge already, than the score will push you those extra few inches to the edge of your seat. 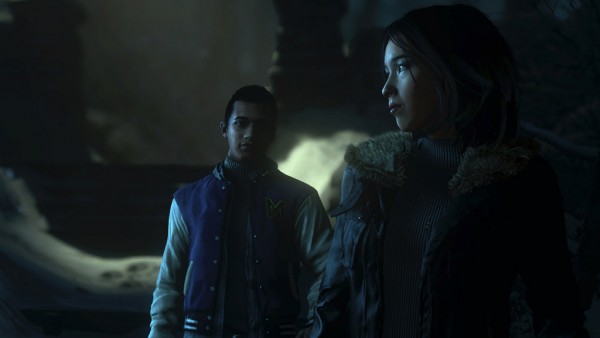 Fantastic voice work and acting from the game’s leads.

As for the voices, this is some of the most natural voice work I have ever heard in a game. Big props to the actors used here, these characters sound real and believable, even if there are a few eyebrow raising lines littered throughout the script. If I had anything bad to say about the audio it would be that rarely character voices are too quiet in contrast to the games master volume, but I feel this was just a sneaky way for the developers to get us to turn up the volumes on our sound systems so that the jump scares would hit home harder.

This section is normally limited to our DVD/Blu-ray reviews but it mentions a warrant in this game review. Until Dawn has some great behind the scenes clips that are gradually unlocked as you play as to not spoil any of the remaining story for you. These go in depth on areas such as the story, inspiration, motion capture, score, scare testing and some of the game’s lore to give a cool behind the scenes look at how the game was brought from concept to a finished product. 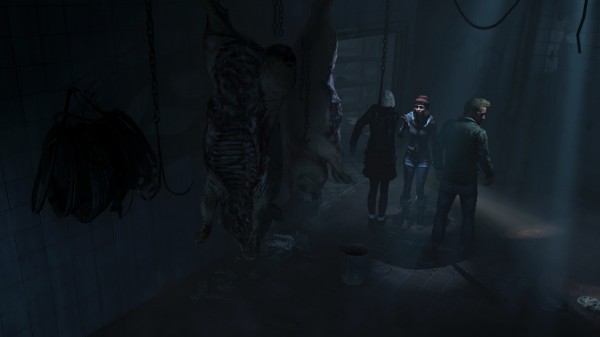 Those little pigs won’t be making it to market.

Until Dawn is a fantastic teen horror game filled with an interesting and fun cast of characters, great mystery elements and important choices that will have large consequences in your play through until the game’s ending. The game is far from flawless, with a few disappointing limitations present in the choice system, a less than optimal control scheme and persistent frame rate issues, however the engaging story tied in with the immersive atmosphere created by the game’s graphics and audio do enough to make up for these imperfections. If you’re looking for a scare, an interesting story or both, Until Dawn should be on your list.