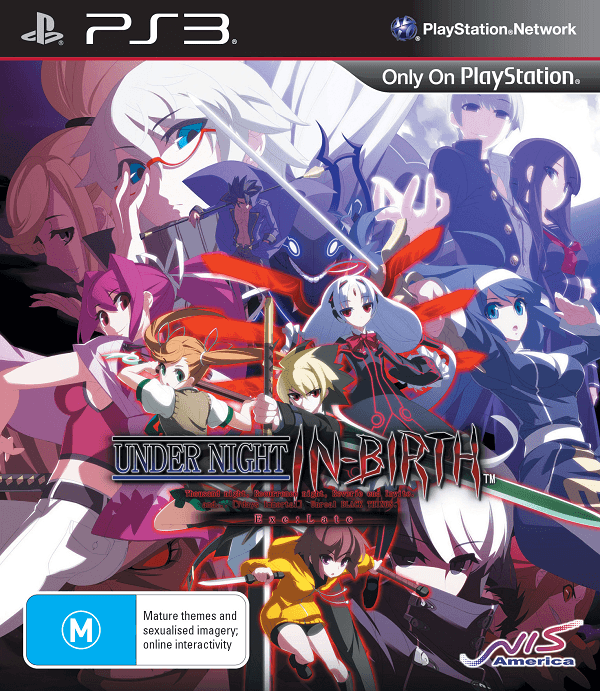 Overview
Whenever a sequel to a popular game franchise is announced pretty much no one is surprised at this point. However thanks to the rise of anime styled fighting games in the West, we have been seeing a number of surprising localizations over the past few years and now another title by Melty Blood’s French Bread has been released in the West. The question is, should fans of the faster paced anime fighting games pick up Under Night In-Birth Exe:Late?

Story
It is worth noting that Under Night In-Birth Exe:Late does not feature an actual story mode of any sort and, like many fighting games with this style, tell a simpler story through an arcade mode. Each playable character gets their own unique story throughout the Arcade Mode where short dialogue sequences will appear at the beginning, a few times in the middle, and at the end of the battle to help set the tone for the game and give players a feel for the character’s personality. 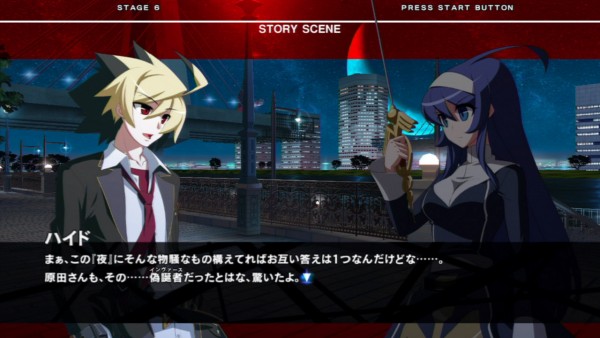 What this means however is that players are left with a threadbare storyline that, while interesting as numerous characters reveal extra information about the fighters, called In-Births as they have been given special abilities after surviving attacks from creatures known as the Void that appear during certain nights throughout the year.

There are various factions at play though these are never really given much detail outside of which characters work for specific organizations and this means that the whole thing is loosely held together which is disappointing. That being said, there are some more humorous stories such as the console exclusive Nanase’s and some of the other stories are rather intriguing on their own, though it is a shame they are never fleshed out.

Gameplay
Once you start up the game you’ll be treated to a whole slew of gameplay modes to take advantage of, though it is worth noting that despite how many are on offer there really is very little variation here. There is the aforementioned Arcade Mode following players through ten battles, a Time Attack Mode, Survival, Score Attack, Versus, Online, and of course Training. 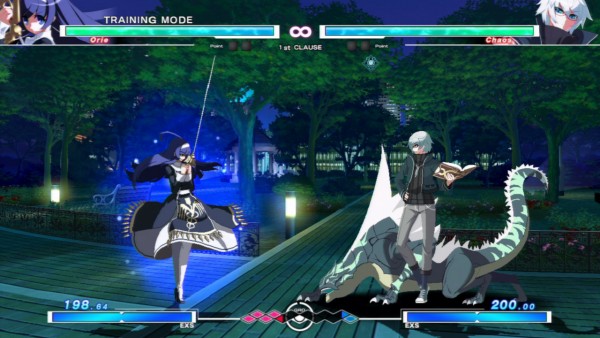 There is also a gallery where players can view previously unlocked CGs and movies as well as purchase locked artwork through points earned by fighting and a minor customization mode that allows players to create a different looking player card that will be shown when you do fight online so nothing truly special here other than plenty of ways to try out the characters in the roster and test your skills.

Once you do enter combat you’ll find a game that is a bit more fast paced than your average fighting game but doesn’t reach the levels of the BlazBlue series. The reason for this is that while Under Night In-Birth Exe:Late is a fast game, it doesn’t feature as many over-the-top movesets and elaborate systems that make up the recent BlazBlue games. Instead players will find a game that heavily rewards players for fighting aggressively and a roster made up of standard moving fighters, a few quicker fighters, and one slow but strong fighter. 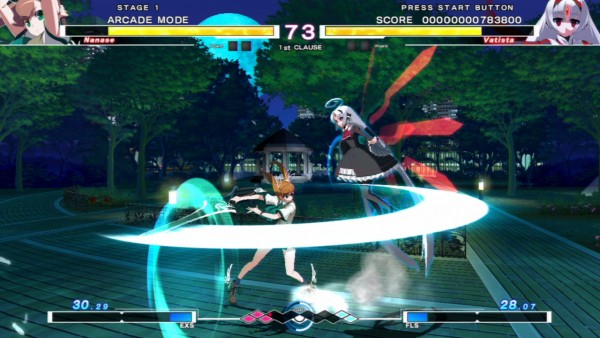 Now the reason I say Under Night In-Birth Exe:Late rewards aggression is thanks to the Grind Grid (GRD) system. As you fight a meter will begin filling up in the bottom of the screen next to each players’ EXS meters and aggressive moves such as attacking, timing your blocks, and advancing on your enemy will increase the meter while running away and defending too long will cause it to decrease. Every 17 seconds the title will use this meter to gauge who is more aggressive and give that player a Vorpal boost that can be used in a number of ways.

Not only can Vorpal boost allow players to deal out more damage with their standard attacks but can also be absorbed into the player’s fighter to boost their EXS meter. It is worth noting that players can also transfer some of their EXS meter into their GRD gauge by holding down a button while not receiving a boost. This isn’t always possible of course as players will need to contend with an opponent but it may help sway the fight your way as the Vorpal boost does make a difference. That being said, it also isn’t a game breaker as players can play smart to try and avoid their opponent’s boosted attacks or turn the tide themselves with various special moves. 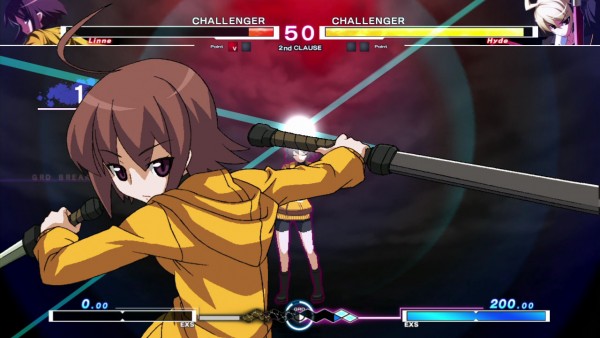 You see, Under Night In-Birth Exe:Late is a game that is very easy to learn and while there is some depth, it will be one that most players will be able to easily grasp. The controls for the system are easy to manage and most special techniques that require the EXS gauge to be filled to at least 100 can be activated through a few familiar directional inputs and the press of a few buttons. The same can be said about the spectacular looking finishing moves, called ‘Infinite Worths’ that require an EXS gauge of 200% or when triggering a “Veil Off” rage style mode that allows the player to break out of combo attacks and also unleash their powerful finishers in a pinch without the need for a full meter.

This means that while there certainly is a challenge players can grasp it easily if they spend some time either fighting against lower leveled AI opponents or training in the training mode. As for the roster, as briefly mentioned earlier, all of the fighters have a unique fighting style that mesh well together and can be handled in different ways. Some are more complicated than others with different mechanics mixed in but there is plenty of variety here to fit your needs. 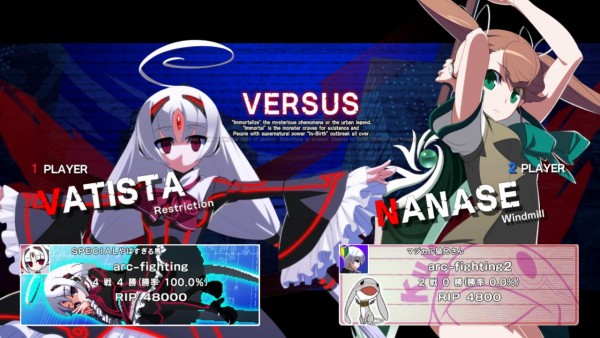 As for the online component, it is unfortunately a bit simple. If you can manage to find a match in what has unfortunately become something hard to do already, you’ll find a very smooth running netcode where I only briefly experienced a bit of slowdown despite playing against a number of different opponents, which unfortunately required a bit of waiting actually find these opponents.

Visuals & Audio
Under Night In-Birth Exe:Late is a bit more down to earth as far as an anime fighting game’s visuals go. What I mean by this is that most of the characters are fairly standard looking without absurd looking designs and thanks to this choice of focus the characters are not only nicely designed and look great on their own, the look even better in battle. The fluid combat system compliments some great looking special attacks that can be unleashed, including the impressive Infinite Worth EXS that can only be triggered when the player is in critical health. 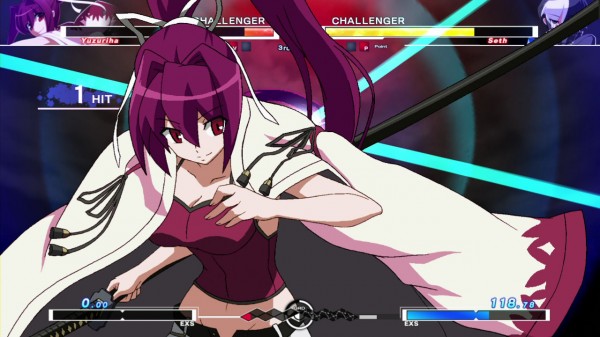 As for the soundtrack, there is some fairly standard sounding combat music included in the release which is to be expected and while it is fitting, it really doesn’t add too much to the experience. The original Japanese voice track is the only one featured in the game but the cast has done a great job fitting their characters though I am disappointed at the lack of subtitles during battle introductions.

Overall
Despite not offering a whole lot of variation between its modes, Under Night In-Birth Exe:Late holds itself together by providing a solid combat experience and easy to learn mechanics. With the GRD helping adjust the flow of combat and the varied cast of characters battling one another, Under Night In-Birth Exe:Late is an impressive looking and enjoyable title despite its few flaws.