Gameplay:
Whilst Uncharted 3 is impeccable in it’s presentation, the gameplay suffers from a handful of minor problems that make the experience less than perfect. There are some interesting new additions to combat which work well and add to the experience, but Drake’s latest adventure is probably less fluid in terms of it’s gunplay, puzzles and platforming than Amongst Thieves.

The first big change is a new emphasis on melee combat, which gets a far greater prominence from the word go. A bar room brawl shows off an improved system that takes obvious notes from Rocksteady’s Batman titles to improve the flow of things. Whilst it doesn’t match the fluidity of the freeflow system, it’s still a great improvement on the often awkward feeling melee had before. Drake makes far greater use of the environment during fights, and can use a whole host of objects to batter his foes – a giant fish is by far the most entertaining option.

The new system is forcibly made more prominent by the enemy AI. The strategy of choice for Marlowe’s goons and other associated minions is to run- straight at you or in circles. These guys have no fear of machine guns, cross fires or open spaces – they are in a word, dumb. The shotgun heavies familiar from previous games have always been fond of getting close, but this time round have skulls that take a greater number of shots to crack than their helmets… 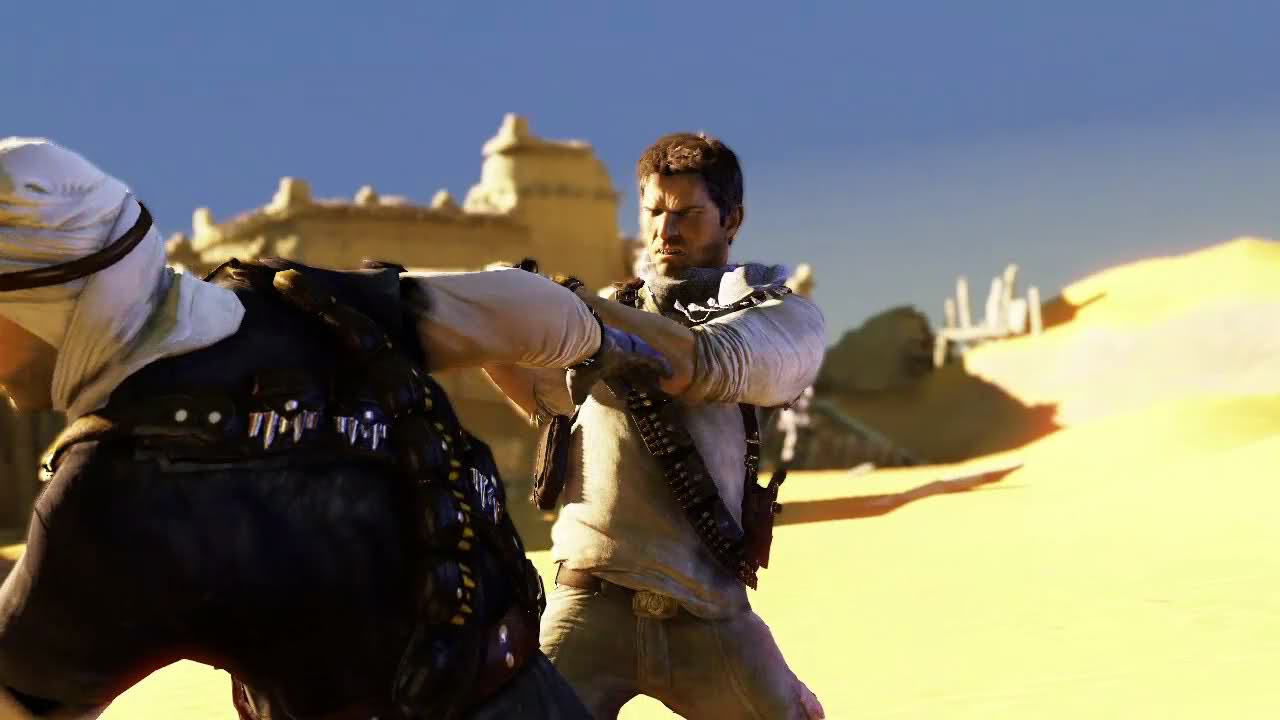 So the melee combat is improved and you have to use it more? What’s the issue? The controls.Find yourself up close with bullets and laser sights raining down on you and melee combat can be a death sentence. The ‘grab’ button is the same as the ‘roll the hell away’ one, and can often have you leaping back onto an enemy when all you want to do is get out of the way.

Add to that Nate’s incredibly slow rotation speed when aiming his gun and you have yourself shoehorned in to a particular style of play that doesn’t work as well as it should. In any given situation the circle button can make Nate roll, put him into cover, or grab an enemy – and you end up with the wrong result quite frequently. It takes all sense of flow from the combat, particularly in open spaces where enemies can approach from any angle.

When pushing forward on a linear path the gameplay is much better and feels much more like it did in Uncharted 2. Things are helped along by the new grenade throwback system, which is one of the best additions to the combat. Timing a button push can fling the grenade back at your enemies and is often a life saver in bigger battles. Should you move closer to the impending explosion on the chance that you can throw it back, or move to a new bit of cover? Blow up the shotgun wielding minions or miss the sweet spot and get wiped out yourself? It’s a split second decision that adds an interesting new dimension to the fighting and is immensely satisfying to pull off.

The weapons run the same gauntlet as ever, with Drake being able to carry two guns that can range from micro machine guns to grenade launchers. Everything feels appropriately powered and picking the right gun off the ground can often make a huge difference to how you fare in the next section. Ammo is generously given on normal level , and there’s never any real threat of running out of bullets. 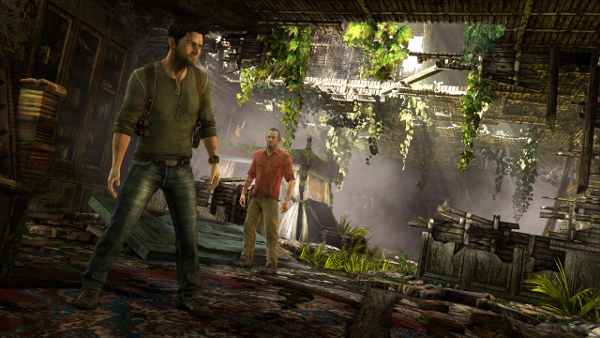 The difficulty factor is also hampered by the HUGE amount of hand holding that goes on. Entering a new room will remind Sully and co just how happy they are to help, and they will proceed to walk over to the nearest object of interest, point at it, and explain what to do. The characters have suddenly become masters of the obvious and an unavoidable game guide all in one, leaving players with little chance to figure things out for themselves.

Having a hint system that players can choose to take advantage of is fine (and the game does have that) but putting a walkthrough in unavoidable dialogue really dampens the fun of exploring.
It reflects the fact that the story is very much on the rails. As spectacular as it is there is always the hand of Naughty Dog floating just above you, pushing Drake to fall on a particular crate, adding an extra bit of power to an unlikely looking jump, or killing off poor Nate for a paltry fall into an unplayable area. If you stick to the path it’s incredible, but best not stray too far.

The platforming has changed little since the second game, and Drake is as athletic and fatigue free as ever. The shooting from a ledge mechanic has been expanded to integrate the gunplay with platforming even more, with enemies raining down bullets from above whilst Nate navigates the handholds and cover directly below.

The simple platforming sections do seem a little thinner on the ground in Deception, but make way for a huge number of incredible set pieces. I honestly have never spent so much game time with my jaw hanging open, swearing along with Drake at the sheer scale of some of these sequences. This is the stuff that Hollywood directors dreams about, and Drake’s Deception showcases the unique ability of video games to pull of any action sequence you could care to imagine and have the player right in the thick of it, interacting with it. 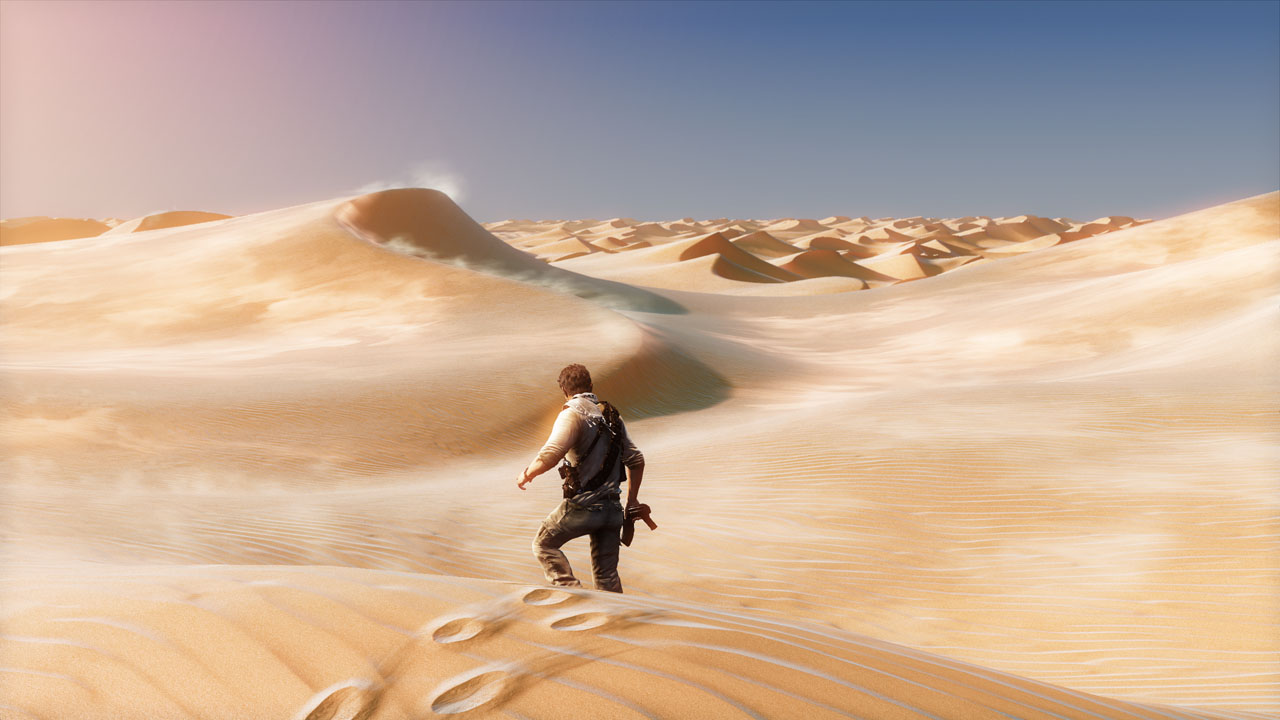 From the immediate drama of a burning chateau to a reflective trek through a barren desert, it’s all superbly crafted and integrated into the story. Poor old Nate takes on more trouble than ever before, and Naughty Dog have ramped up the emotional journey behind the physical one to make sure that all the action keeps a human edge. Drake’s Deception effortlessly tops anything that the previous two games had to offer, taking Uncharted 2’s famous train sequence and blowing it out of the water time and time again. It is undoubtedly the most spectacular game of the series, and if Naughty Dog keep improving at this rate then no one else stands a chance in hell of matching them .

In conclusion, the gameplay is a thing of two halves. When anchored to the ‘cinematic’ aspect of the game (the set pieces) everything flows well and combines with the perfection of the presentation to bring players some of the most memorable moments in gaming this year. When there isn’t a giant bit of spectacle around, the weaknesses in the mechanics show up and can make Drake’s Deception feel like a step backwards when it comes to the gameplay basics.

Multiplayer:
Uncharted 3’s multiplayer offers a huge range of gameplay modes to cover all bases. As local multiplayer is largely forgotten in modern games in favour of online play, Naughty Dog continues to cater to every taste, coming complete with online co-op and competitive play and local splitscreen.

Everything has taken a step forward from Uncharted 2 in terms of customisation and depth, bringing the series ever closer to the big leagues of multiplayer gaming. It certainly has little competition in the third person field and a unique platforming aspect to the gameplay.

The gameplay itself is more along the lines of Uncharted 2, coming along with a sprint feature to keep the pace up. There are few places to hide in the maps, making for a constantly on the go experience enhanced by environments that can change as the session progresses. Some levels (such as the Museum) from Uncharted 2 return, and sit well alongside new maps from Deception.
The ever classic free for all mode finally makes an appearance (and was certainly the busiest mode during my hours spent with it), taking it’s place alongside team deathmatches and familiar modes like Siege and Plunder. 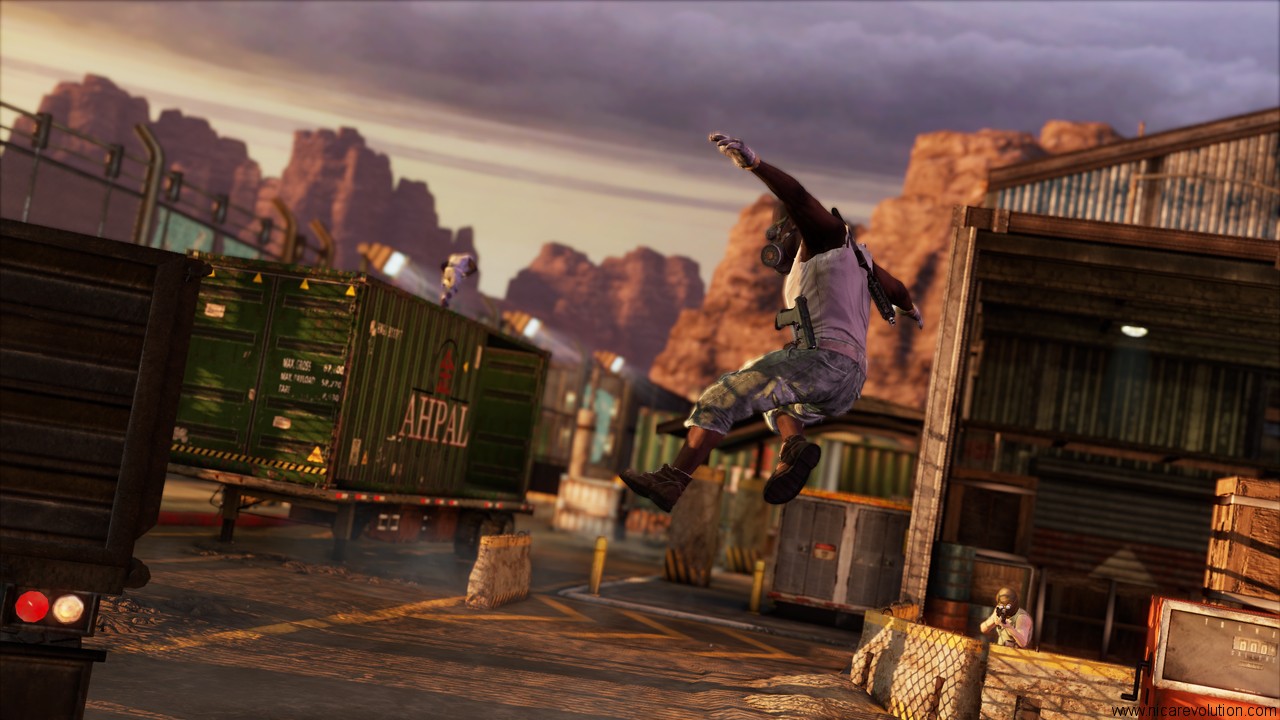 The co-op adventure mode has five story based missions for players to trek through, spanning locations from throughout the Uncharted series. Extended shooting sequences with a few teamwork exercises thrown in, they are actually a bit on the challenging side! The story aspect of them is limited by the fact that they have very little context to play with, and some of the tasks are a bit ridiculous (hit a box repeatedly with the butt of a rifle, not the most exciting task in the world) – and in splitscreen a third of the display space is taken up by a giant doodle of a heart. This bizarre feature works as an indicator for when the other player is active, but why on earth make it so big? As promising an idea of a co-op story is for the series, the current form falls a bit short when put in such unavoidable comparison to the main game.

Co-op arena is far more fun – putting up to four players through a series of challenges that cycle through the individual multiplayer modes. A brand new buddy system comes in handy here, allowing players to spawn in any available safe location beside their team mates instead of right in front of the enemy.

Also new to the multiplayer are ‘kickbacks’, essentially the kill streak rewards seen in the Call of Duty series. Unlike in those games, there’s never a feeling that they overpower certain players – scoring a sniper rifle from 7 kills is a bonus -not a game breaker.

Every multiplayer mode gives players the opportunity to level up and add to their pool of cash. Said moolah can be used to purchase new skins, taunts and character boosts, and there is a huge amount of content to be unlocked for players who invest the time.

Considering the content already on offer in the main campaign, Uncharted 3 comes with a huge amount of content for your cash. The story mode doesn’t stand a chance against the main campaign, but the multiplayer modes that forget about its single player brother are all the better for it. 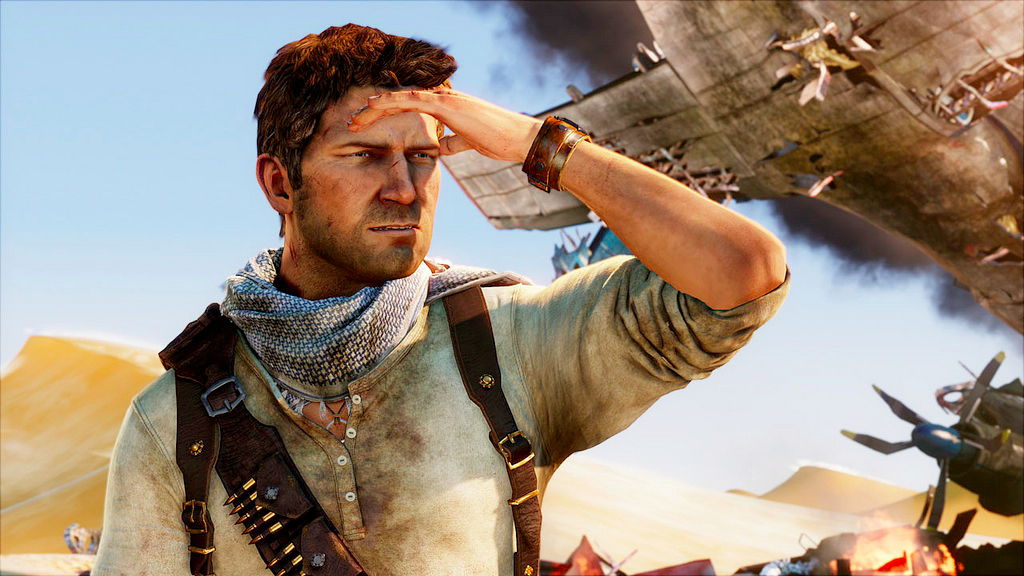 Overall:
Uncharted has always branded itself as a cinematic experience, and in that aspect it succeeds entirely. The quality of the presentation is impeccable and the integration and execution of every element -from the biggest of set pieces to the specks of dirt on Drake’s arm- could not be better. With Drake’s Deception Naughty Dog have perfected the cinematic character of the Uncharted series, making it the Raiders of the Lost Ark for gamers: a must own, a must see, and the measuring stick for every action game that follows it.

What lets it down is the basics – the gameplay. It’s by no means broken but it certainly is flawed. New features like the grenade throwback system help to integrate the platforming and shooting sequences even more, but there are too many frustrating aspects to the combat that don’t help the flow of the game. The relentless hint dropping really does spoil the exploration aspect of some areas, and the game’s conclusion, whilst satisfying from a story point of view, is something of an anticlimax for the gameplay.

You can have some of the best moments in gaming with Uncharted 3, but also some of the most frustrating. It’s difficult to bring it down in the face of the quality of the presentation and the amount of content on offer, but there are still things to be improved to make Uncharted the best it can be.