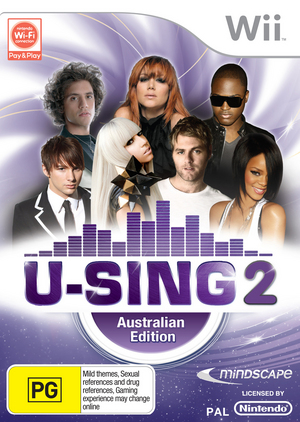 Are you ready to sing the hit songs from your favourite Aussie and international artists ?  Well what are you waiting for, get your mates together turn on your Nintendo Wii grab the microphones and sing along to some of the biggest hits from Universal Music including  such Aussies artists as :

If you’re not fan of the Aussie artist, don’t worry as Mindscape have you covered as well.  There’s a fine mix of international hits such as :

Plus many more, there should be something for everyone in U-Sing 2 and if there isn’t, then you can jump straight into the U-Sing DLC Store and download (at this moment) another 49 more international hit songs straight to your Wii console.

Straight to the point U-Sing 2 is a singing / Karaoke game.  There are a total of 8 single and multiplayer game modes which include the initial training/practice (which appears as soon as you power up the game for the first time) where you get to learn the basics of singing and using the USB attached Microphone.  Get stuck into the Solo mode where you can scroll through, select and sing from all the 40 songs plus any others you’ve purchased from the U-Store.  There’s also a neat little filter option that will allow you to list songs in alphabetical order, by year, by difficulty level, by artist or by music style.  If you can’t decide you can also pick the medley option where you’ll get to sing five short versions of songs selected at random.

Once you’ve selected your song the next menu that appears will allow you to choose your difficulty level from easy, medium or hard.  You also have the option to choose between singing a short or long version of the song.  Just before you start the game on the left you can see the high scores obtained by yourself or others that have played in order of long or short and difficulty so you know how much you need to beat their score and claim your spot on the top of the leaderboard.

Then it’s off to the singing part, before the song starts you’re prompted to activate the microphone by singing into it till it fills up a gauge meter.   If you’re playing multiplayer this is good as it allows you to see which colour you are (blue or green player).  The aim of U-Sing 2 is to sing in the correct pitch and correct rhythm to increase your score as the lyrics appear down the bottom of the screen they change colour to indicate which words need to be sung.  Just underneath, the next set of lyrics are also displayed to prepare you for what is about to come next.  Now I’m not the best singer in the world (I did try and audition for Australian Idol one year but they took one look at me and told me to take a hike) but get the best scores in this game you’re going to sing by adjusting your pitch to accurately fill up the gauges.  Just like other singing games after you complete a page of lyrics, comments will appear on the right of the screen ranging from “Good” to MASTERABBOTT … ehhmm sorry “Unbelievable”.    Another cool feature while you’re singing is the countdown timer that displays how much time is left before the song ends.

One last feature that appears while your singing solo or in multiplayer is the Golden Notes.  What are they you ask ?  Well read on and I’ll tell you.  During a song,  golden notes appear in the lyrics if you sing that section / word and fill up that specific meter where the golden note is residing on it will trigger a bonus sequence during which the notes that follow in the music score become golden. For the next two pages or so every golden note meter filled completely will give you bonus points which are then added to your score at the end of the sequence. At the end of your song your score is tallied up your given a rating according to your performance, some of the grades are :  Atrocious, Beginner, Pretty Good, Professional and Legend (did someone say my name once again)  Most of my results had me sitting between Beginner and Pretty good, but don’t worry I’ll make it to LEGEND one of these days !!

I’ll tell you what I want, what I really really want !! .. (yes I forced myself to sing a spice girls song, lucky no one else was around when I was doing it otherwise it would have been recorded and posted on youtube) U-Sing 2 lacks a Solo Career Mode,  the singing part of the game is pretty solid with the speech technology picking up your pitch and rhythm pretty nicely.  The sad part is there is no real point in playing the game on your own as you don’t have anything to achieve or accomplish.  Having some sort of Career mode would of extended the life of the game outside the group party aspect, but alas it looks like U-Sing real focus was aimed for social butterflies with lots of friends who also enjoy singing and having a great time.

Which takes me to the multipayer  modes :  There are a total of three modes, they are :  Duo – which lets you sing a song with a partner.   In this mode you and your partner are both singing at the same time with the game screen split into two sections, blue down the bottom and green up the top.  At the end of the song both the players scores are added together and combined with a grade.  Next mode is Versus :  This mode will allow you to sing the same song against another player, the player with the best score at the end of the song wins.  Finally we have Battle Mode :  As with previous modes the screen is split into two sections with each player having their own words appear on the screen, points etc.   The way Battle mode works is both players sing alternately, one taking the role of the “attacker”  The attacker job is to disrupt the singers performance by singing and holding notes at specific points in the song.  If they do so they unlock penalties for the opposing player.  The type of penalties you can unlock are : Trembling,  Break in the Sound, Lyrics moving further away, Reversal of Lyrics on the screen and my favourite Lyrics disappear off the screen.  The roles of attack and singer swap regularly during the song, so you got to be on your toes and be prepare to take as much as you can dish out.

Other options within the game is the Jukebox,  which is accessible from the main menu.  Here you can listen to and watch your favourite clips from the game without having to stress out singing everything in the right pitch or tone to gain high scores.  The great function of Jukebox mode is you can enjoy Karaoke style singing with the press of the button the lyrics will appear on the screen and you can sing along on your own or with your friends.  This is great for parties !!

As previously mentioned if you can’t find a song that appeals to you from the 40 songs, you can login to the U-Sing Store and purchase / download new songs straight to your Wii console.  You’ll need to be connected to the internet so make sure that’s setup first before attempting to access the store.  Once you’re in you can check out approx. 49 songs (more are added weekly) new songs priced at 300 Wii points each.  To buy simply select, confirm and download the song, once its completed it will appear in your solo, multiplayer and jukebox.

As Shania Twain would say in her song “That don’t impress me much” is how I feel about U-Sing 2 Australia Edition.  Even though it’s jam packed with great songs, impressive voice recognition technology, fun multiplayer and a great jukebox mode for entertaining your friends when throwing a party, plus a DLC store to download more songs at a price.  The only thing lacking in the game was some sort of career in solo mode.  If you’re a loner U-Sing 2 is not going to cut it for you as the best you can do is sing songs and beat your high score.  On the other hand, if you’ve got lots of friends and like hosting sing-a-long parties over at your house then U-Sing 2 will be straight up your alley as you’ll be able to entertain them for hours.