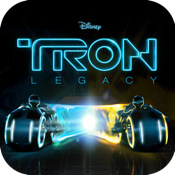 The original Tron film from 1982 is still a cult classic to this day, about a virtual world where programs compete in a glaitorial combat tournament. Now Disney has released a blockbuster sequel in 3D so obviously that leads to a lot of merchandise is to be released, and obviously a video game, which will suck. It’s the Hollywood code. Now Tron: Legacy is available for the iPhone, and it looks like they tried really hard to simulate the Tron movie experience and in a few ways, they’ve succeeded. But does this game live up to its name, or does it follow the trend like many other movie-based titles? 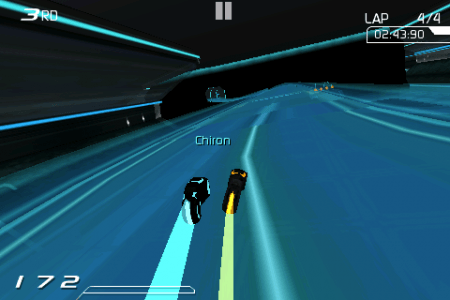 These are some of the best graphics you will see on the iPhone, but sadly it’s not an easy title to recommend.

The game begins with the screen getting sucked into a cybernetic world like the movies. The menus are well presented in the true Tron-styled art form, the sound effects and music are really great as well. First glance on the menus will truly impress, with both multiplayer and single player being available, as well as options to access, achievements to gain, profile options, how to play menu.….things look really great from the start, but unfortunately its all down hill from there. There is no storyline to be told, or information on who your character is, but it is implied you are a program named Beta, who is competing in a tournament.  That’s all you’ll ever know. Fans of Tron will be greatly disappointed to know this game has next to nothing to do with the movie, except for it takes place within in the same world. That’s it. Also, fans of the movie will notice that in the film, tournaments are split into two types of battles-battles on Lightcycles and battles on foot using discs as weapons. Recognizers are used later on in a battle that has nothing to do with the tournament. In this game for the iPhone, Lightcycles are not used in battles, but instead races. There is no on foot disc fighting, but instead they jump into a Recognizer and fly it through courses shooting at tanks-for some unknown reason. 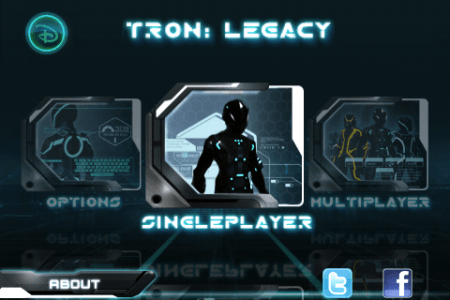 The amount of options and menu’s this game has is impressive and it has wonderful presentation, but unfortunately the gameplay itself is another story.

Gameplay is the most important part of any game, so its sad to say that in Tron: Legacy The Game, the gameplay is its weakest point. The game is split into two parts: Lightcycle levels are basically high-tech motor bikes which play like a watered down F-Zero with Mario Kart ‘collect-and-shoot’ power up-like-weapons, and Recognizer levels which play like a slower, less fun Virtual Cop or House of the Dead. 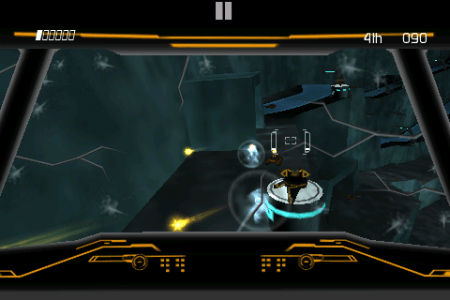 I really don’t remember seeing this scene in the movie!

Lightcycle levels begin with a God 0f War styled button mash, with racers running before jumping onto their lightcycles to gain an extra boost. This works effective and is a nice start to the race, and it’s a nice change from the typical countdown seen in most racers. The gameplay is swift and you do get an adrenaline rush as cycles feel fast, and with the games futuristic setting it has a little bit of an F-Zero kind of feel. The controls are tight and actually work really well, becoming a surprisingly bright highlight of this part of the game. Players tap the right side of the screen for acceleration and the left side to break. Turning is controlled via tilting the iPhone, and acceleration is automatic. Mario-Kart styled weapons can also be obtained by running over boxes, and can be used by pressing a symbol on the screen, which mixes things up which is nice, but unfortunately most of them are pretty useless. However many levels have very sharp turns and narrow passageways, so crashing is inevitable, and with no health or damage meter, one hit is instant death, which becomes very highly frustrating. The player has unlimited re-spawns which helps, but the points your revived at are often terrible, placing you in front of walls and such, often making you crash again and forcing you to loose valuable time which is crucial in a fast-paced, high-speed game like this. The tournament’s levels are mostly you racing against only one opponent, sometimes even by yourself as just a time trial. On some rare occasions you might verse two, but this is rare. It really doesn’t feel like a competition alot of the time. The controls are decent although turning can occasionally be a slight issue but most importantly the game feels fast, but many the track’s designs do not take advantage of these, and instead limits them, destroying a lot of the hope left for this game. Its not the only reason why this game flopps, but it’s the main contributing factor to the Lightcycle section of the game. To make matters worse, fans on the Tron franchise most likely would’ve bought this title for one of the signature moves-creating a wall of light from a lightcycle and making enemies crash into it. In the game, the walls only follow the cycle for a small radius and don’t remain like in the movies, and they do not kill your opponents, but instead make you just bounce off them. This is pretty much stabbing the fans in the back-very disappointing. 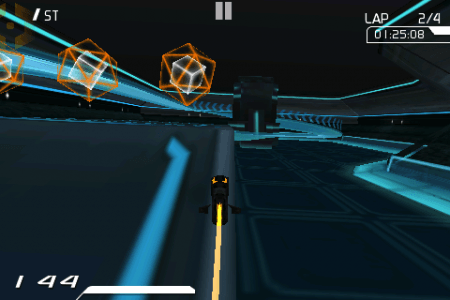 It’s nice to have power-ups as it does mix things up, but its pointless to have them when they do almost nothing.

The second part of the game however is surprisingly even worse. Recognizer levels work are on-rail shooter levels, that are just plainly slow, boring and hard. There isn’t much to it, the vehicle moves it’s self, you tilt the screen to move the curser, and you tap on the screen when you want to shoot at whatever the curser is currently on. With great graphics and music you’d think you can’t go wrong, but its chore to play. The curser is slow and unreliable, and while you can change this to be faster in the options, it doesn’t help it much. If players could simply tap on what they wanted to explode, things would be alot more enjoyable, but there isn’t an option for a similar play scheme, or any other alternative play scheme at all. This leads to very slow-paced gameplay, and no amount of explosions can save it. Boring levels that all look the same don’t help either, same goes with the Lightcycle levels. 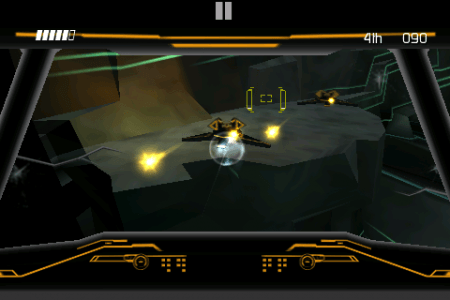 With the fast-paced, high speed Lightcycle levels being the main focus of the game, the slow and boring Recognizer levels seem a bit out of place.

Thankfully, the game isn’t all bad, and it does look like Disney Mobile did put a bit of effort into this title. Music sounds very Daft Punk-ish and suits the game well. Graphics are probably the best thing about Tron: Legacy and it doesn’t look like Disney could’ve done much to improve on this part of the game. While the colour schemes and florissant lights on dark backgrounds do get a little repetitive, you can’t blame the developer for it because of its source material it’s based on. The 3D models are solid and are very well done, the game looks like it could rival a few of the older Playstation 2 titles in some points. Levels look stunning and character models are done really well, although some explosions could’ve been a bit nicer for eye candy. 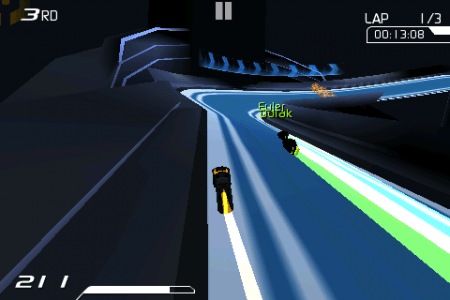 Races with three racers on the screen are seldom, which sucks because they are alot more fun than just versing one opponent or a simple time trial by yourself.

Tron: Legacy for the iPhone is like that present you got on christmas as a little kid. You know, that one in the really big box wrapped really nicely, and you open it to find another box inside, so you open that to find an even smaller box inside, and then you open it to find it’s just a sweater from your grandma, but at least it looks cool. Then you put the sweater on and it doesn’t even suit you, and to make things worse it doesn’t even fit you. Tron: Legacy is that sweater. Its wrapped really nicely in some very impressive graphics, awesome audio and very impressive presentation, but the gameplay and controls are so bad, its become really unenjoyable. It’s hard to appreciate things like unlocking achievements and multiplayer when the game isn’t even fun to play. It’s hard to even respect the game as it has the same name as a huge blockbuster movie, but has so little to do with the movie at all. It’s only been a few weeks, but so far Tron: Legacy has been my biggest gaming disappointment of 2011 so far, because this title could’ve had some potential to been a decent one. Disney Mobile did alot of things right with this game, but one massive element pulled it all down. Its as if they put in alot of effort into making this game look and sound good, but forgot the key element of gaming: playing the game. 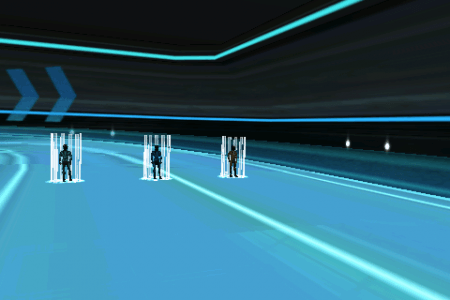 Racers, start your engines! Or um, whatever Lighcycles have!