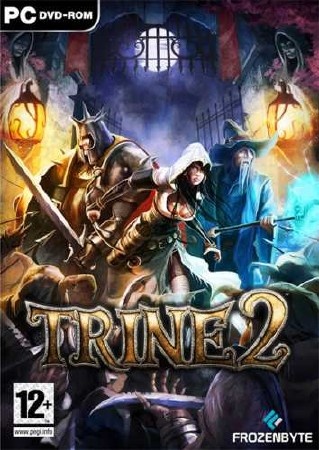 Overview
Unsurprisingly following on from Trine comes Trine 2, a truly multi platform title that come 2012 will even see it’s way to a Linux release. Developed by Finnish company Frozenbyte, it’s a puzzle platformer with a big emphasis on the puzzle. There are goblins to fight and jumps to make, but you’ll spend the majority of your time figuring out mechanisms, rotating and conjuring objects , and generally trying everything possible to get to the next level.

There’s a good helping of action for your cash, and as well as a 7-8 hour single player experience, there’s a local and online multiplayer to add a little bit of longevity. It’s all incredibly well styled to the tune of a fairy tale, and is yet another entry in this year’s gaming season that proves that the platformer still has a lot of life in it yet. 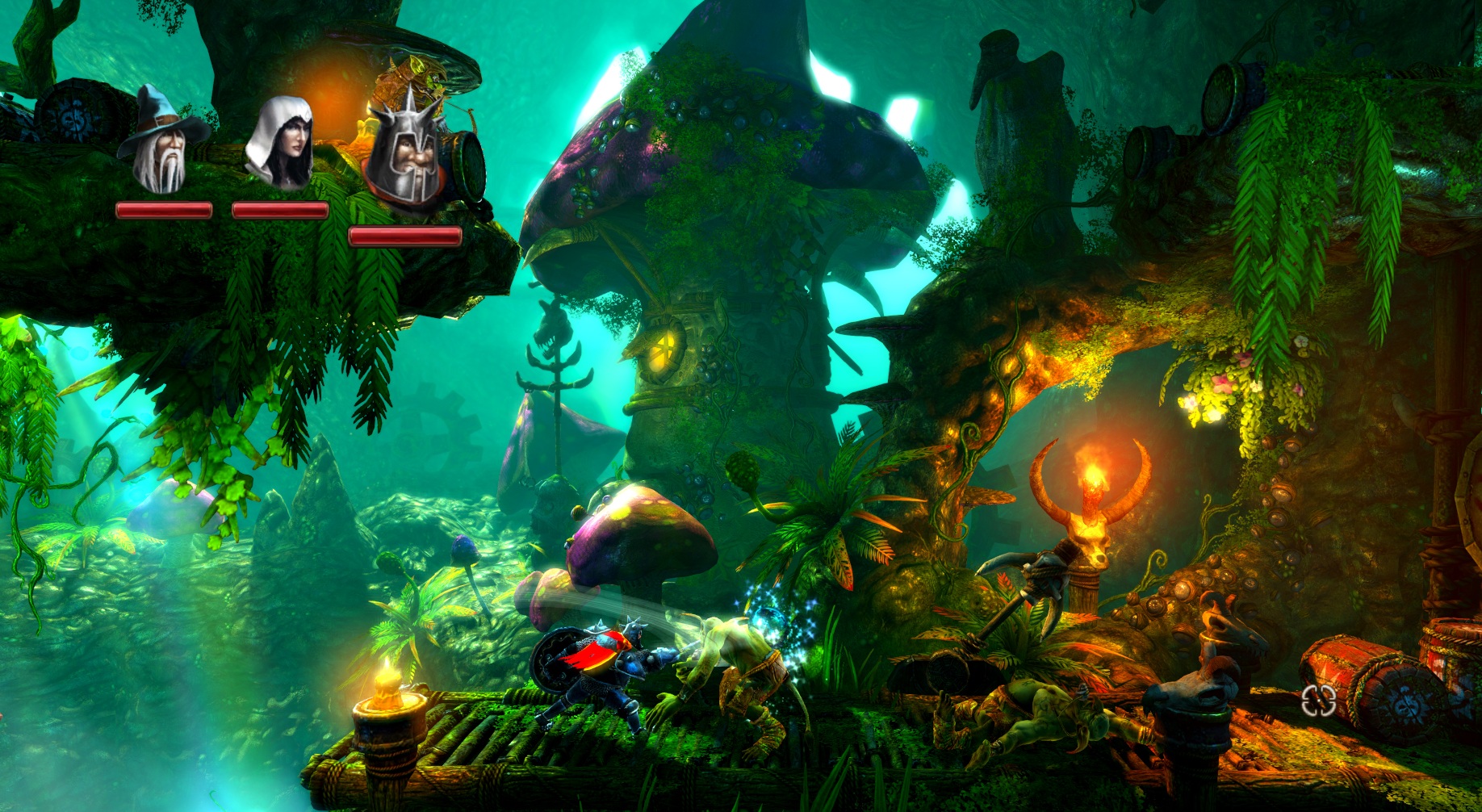 Overview
The three heroes of the Trine (a mysterious artefact that doesn’t do much but float around suggestively), are gathered together once more to defend the realm. In typical fantasy style, the three are a thief, a wizard and a knight, and they go up against a horde of goblins and various other icky denizens of the fairy tale world. Along the way they stumble into another realm, where the Queen of the land sets them off on a great adventure to save her kingdom.

There are a few predictable twists and turns along the way, and the characters (Zoya the thief, Amadeus the wizard and Pontius the knight)only rise a little bit out of caricature. It is nice that they even have their own names and voices, but the fairy tale set up doesn’t allow for much in terms of character. The story too never really becomes anything more than background noise, and the brief scenes between levels (presented as pages of a story book) are all too easy to skip.

Overview
Luckily the gameplay is a treat. The three characters are incredibly well balanced, with each having a handful of unique skills that can be upgraded along the journey. As you would expect, the knight is the hack and slash man handy in a fight, but can also make use of his shield to deflect fire and redirect water or acid. Zoya the thief can sweep quickly across distances with her hookshot and catch goblins from afar with her bow, and Amadeus with his conjured planks and boxes provides something of a cheat option for every puzzle – throw planks at it and run!

All three characters are instantly interchangeable in single player and the game makes full use of all of them – never does one or the other feel expendable. What can feel a bit redundant are some of the skill upgrades – there are a few that are very useful (Pontius’ throwing hammer, extra objects to conjure for Amadeus), but some that past a certain point become redundant when all three characters are accessible – why would you choose to sneak past enemies with Zoya when you could take them out with a hammer to the face? 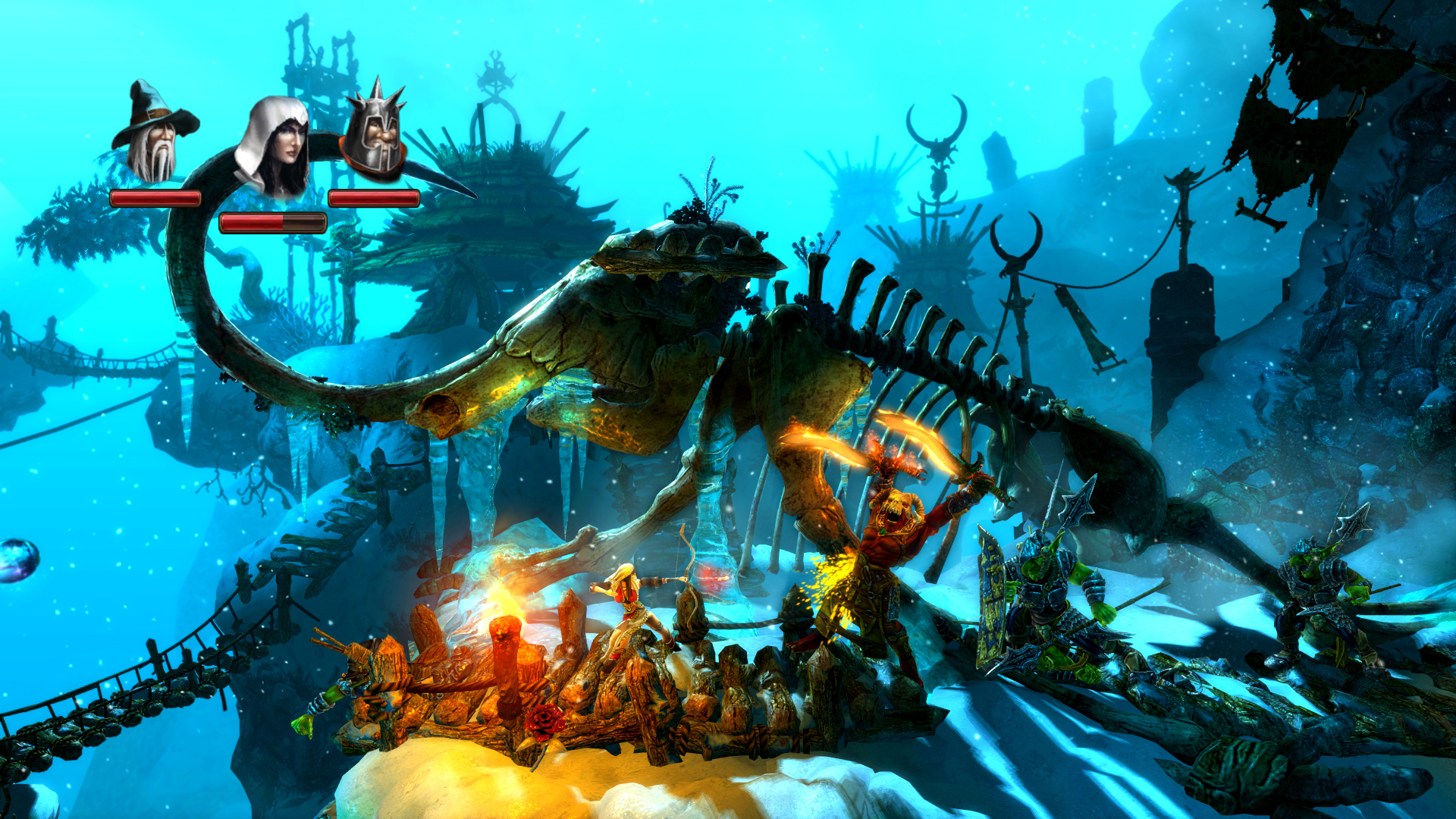 The puzzles range from the simple – stack a few crates together to clear a gap – to the maddeningly simple – stack a few crates whilst dodging lava, jumping neatly onto a moving platform, holding a spiked pendulum out of the way and making the perfect jump to the other side. They’re often beautifully imaginative too , and can see you channelling water onto magical plants that blossom into new bridges, or feeding a giant frog to use it’s extended tongue as a platform. Frozenbyte have utilised the entire gorgeous world that they’ve created and integrated it perfectly with the gameplay – it’s a pleasure to play, with spot on controls and just the right amount of head scratching to the puzzles. The physics are incredibly tight, and with Amadues able to rotate and balance all manner of objects, the smallest of angles and balances come into play – Trine 2 has that great quality to it that makes you feel smart for suceeding (even if you do cheat a bit).

The multiplayer too is incredibly well integrated. In a public online game you can begin adventuring on your own, get drawn into the game and then suddenly find yourself joined by another player or two. Having all three characters on screen simultaneously opens up a whole new aspect to the puzzles, allowing for more chaotic and creative methods to appear from nowhere. There is a chat system available, but half of the fun comes from figuring out what everyone is up to without talking about it, letting crazy wizards conjure planks everywhere as Pontius throws his hammer at everything in sight.

The multiplayer is really the games only claim to longevity though – as great as Trine 2 is, it just doesn’t have anything to pull you back into it. There are collectibles to be found throughout the levels, but these scraps of concept art and bizarre rhymes are a bit of a disappointment – hiding some of the skills or maybe some new costumes would have added a bit more incentive to revisiting a level.

Minor gripes aside Trine 2 is a fantastic slice of puzzle platforming, and the core gameplay is near faultless -all it needs is a few tweaks to the bells and whistles. 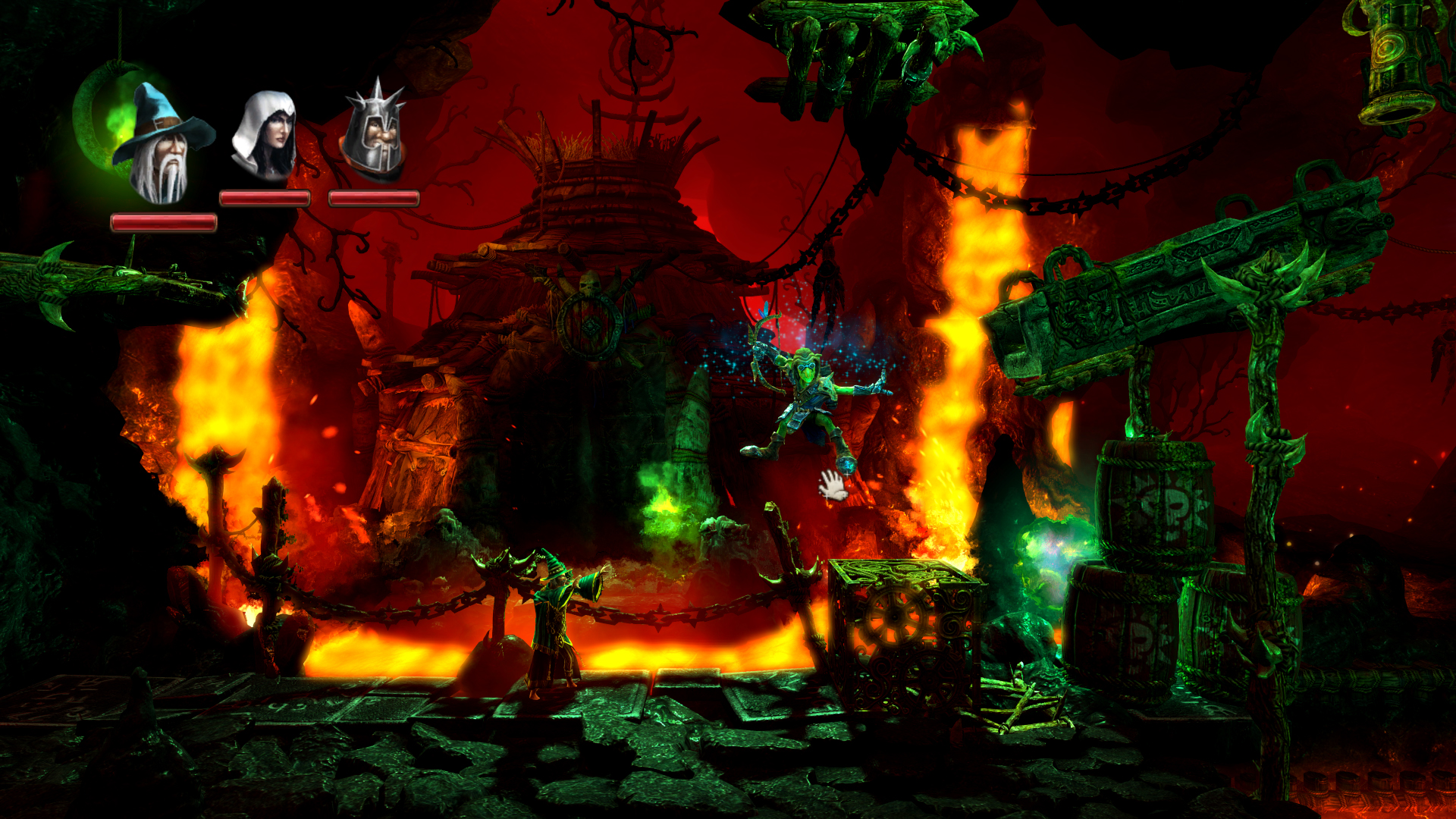 Visuals/Audio
The screenshots speak for themselves – Trine 2 is gorgeous. The fantasy world Frozenbyte have brought to life here is a vibrant one, a living and breathing place lit by the glow of candles, populated by bizarre creatures and oddball plants. There are plenty of different environments to gawk at, and some of the enemies and environments will simply bring a smile to your face. The details are what really make it work though – watching Amadeus clutch his hat in the wind, or Pontius using his shield as a giant paddle – small touches that add a wealth of personality to characters that have fairly flimsy set ups. The voice actors from the original Trine return (that’s Isabella from Dragon Age II if Zoya sounds familiar) and do a good job with some fairly average dialogue. What does hold it back is the strangely detached feeling of the voices from the characters – it does sound like background narration more than character dialogue. The music for the most part provides a soft backdrop to all the puzzling, but kicks up a notch with a great battle theme whenever it’s time to dice some goblins.

Overall
Trine 2 is an easy game to recommend. For $14.99 you get some tricky, addictive gameplay, a gorgeous story book world and a multiplayer that’s ripe for some creative chaos. The story is absolutely nothing new and it may not be up there in terms of replayability, but that’s easily forgotten when you’re bouncing around on a giant starfish, conjuring boxes and shooting ice arrows at goblins. Frozenbyte have created something in Trine 2 that feeds on the warm fuzzy glow of fantasy , keeps your brain engaged and is great fun to boot – Trine 3 please?