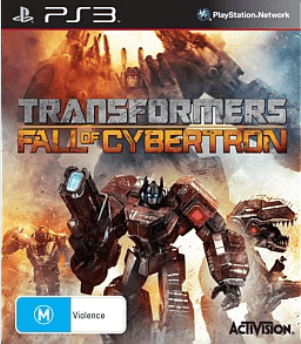 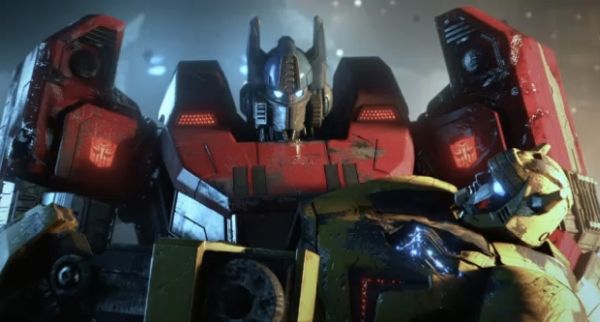 Most Transformers fans would agree that the last few years have been something of a turbulent time for their franchise. While the quality of the live action movies, their game adaptations and recent cartoons are often described as mediocre and “childhood destroying”, the films were still some of the highest grossing of all time, and toy sales had skyrocketed in popularity. In 2010, game developer High Moon Studios took the series a step in the right direction, with the release of Transformers: War for Cybertron. This title, which explored the origin story of the war on the Transformers home world Cybertron, was received very well by both Transformers fans and hardcore gamers alike. The original, well written story, tightly refined gameplay mechanics and a kick ass sense of nostalgia made it a must have for generation one fans of the series. Given this sudden burst in popularity, it was only a matter of time before a sequel was on the horizon. Fall of Cybertron is that sequel.

The opening act of Transformers: Fall of Cybertron occurs a few years after the final events of War for Cybertron. Due to the influence of Megatron and his subservient Decepticons, the Transformer home world of Cybertron is dying. As it turns out, corrupting the planet’s core might not have been the smartest move on Megatron’s part. The planet is now unable to provide the life-giving essence known as Energon for the Transformers to survive. The core has been forced to shut down in order to repair itself, a process which would take place over millions of years. To ensure their continued survival, the Autobot leader Optimus Prime issues a planet-wide evacuation order. The Autobots commission their own evacuation and transport ship: the Ark, in which Optimus and the remaining Autobots on Cybertron hope to make their escape. 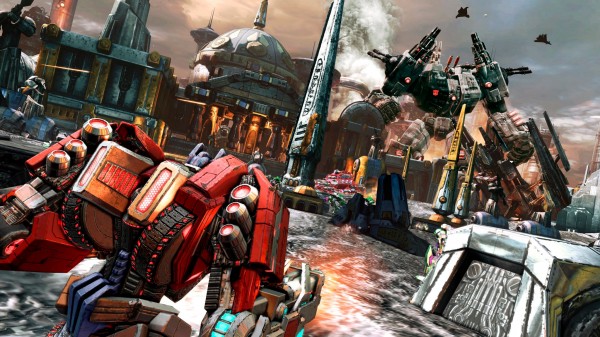 The story presented in FoC is solid and very well written. The writers have clearly taken a long, hard look at the original source material and have delivered a well structured plot that ultimately fits in very neatly with the canon of the Transformers universe. As a fan, it’s good to see exactly what transpired during the final days of Cybertron. The game also features a good mix of humorous Easter egg type scenes, such as when Optimus, in the middle of an emergency situation, is able to sit down and watch cartoons on Grimlock’s giant television. It’s this sort of writing that shows the developers have a genuine passion for the series they’re working with.

Throughout the course of the single player campaign, players will take control of a large cast of Autobots and Decepticons throughout the course of the story. Fans of the generation 1 cartoons will be pleased to note a huge cast of characters featuring a large selection from the original cartoons. In each individual game chapter, the players will take on the role of one or more of the main cast as the Autobots and Decepticons in a well developed third person shooter format. Unlike the original WfC game, the campaign this time around is doesn’t feature the same adaptive co-op function as its predecessor. Not only that, but the character selection mechanic has also been removed; giving you no choice as to which character you’ll take control of. 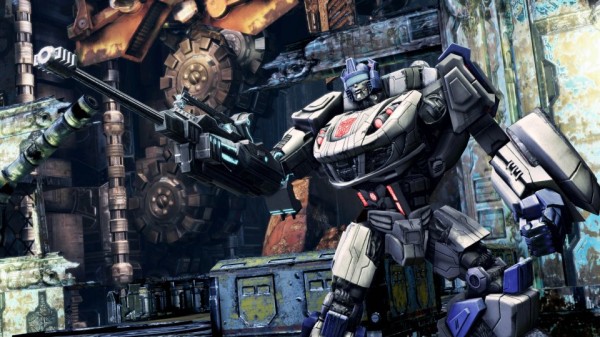 Now this is just a minor personal issue, mostly because regardless of which character you’re using, they all have access to the same types of weapons, as well Teletraan 1 network shop. The differences between character to character are varied, as some have the ability to use grappling hooks, cloaking fields, vehicle flight and support targeting. However, if presented with a point in the story where the player could potentially take control of several different Transformers, it feels a little static to just get stuck with one. Let’s just say I wasn’t fond of the stage where players are stuck using Cliffjumper (one of the most intensely disliked characters in the Transformers universe.) This does nothing to break the game’s playability, but it just feels that the campaign would have lent itself to co-operative play so well, which in turn would have also supplemented the game’s overall longevity. If anything it just feels like a missed opportunity in an otherwise fantastic campaign.

In combat itself, players do battle using either a Transformer’s robot form or vehicle form. As a third person shooter, as most would expect, the players will learn to familiarise themselves with a large variety of alien weapons. In robot mode, the player is able to switch between two weapons: a light weapon and a heavy weapon. The game’s light weapons are the most commonly used weapons that are plentiful in ammo and in chances to use them. These include weapons such as submachine guns, shotguns and burst rifles. The heavy weapons feature the more destructive power of grenade launchers, energy discs and rocket launchers. Players are able to equip one of each, though they must be mindful that both feature individual types of ammo pickups. Heavy weapon ammo is rare, but should be relished when the chance to use them arises. Transformers are also able to do combat in vehicle mode, which grants great deal more mobility, but the trade-off is lowered firing rate and weapon damage. Despite the two types of combat mode, most players will end up using robot mode about eighty percent of the time, with vehicle mode tending to be reserved for chases, exploration or even stealth. The transition from robot to vehicle and back again is relatively seamless however, and gives the player a strong feeling of being in control of the battlefield. The core gameplay also features a variety of collectibles, such as audio logs of the main character’s thoughts on the war, as well as currency based chips which can be used to purchase upgrades from Teletraan 1. 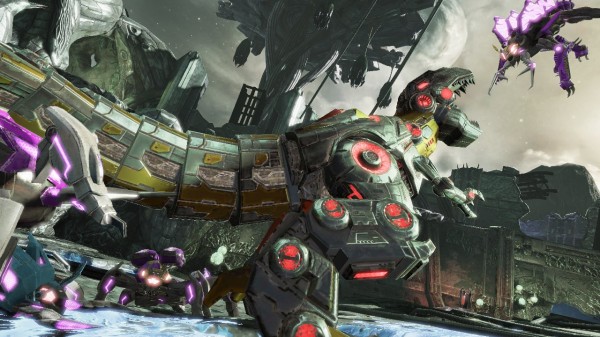 One of the biggest gameplay selling points of the game was also the inclusion of Grimlock, the leader of the Dinobots to the playable characters list. After being subjected to horrifying experiments at the hands of the Decepticon scientist Shockwave, Grimlock breaks loose to wreak his own personal war against his foes. Grimlock operates a little differently from other Transformers. Due to the extensive testing that took place on him, he is unable to transform at will until his rage meter has been built up. However, when that meter is full, Grimlock is able to unleash the full fury of his newly acquired Tyrannosaurus form. This was definitely one of the most epic and enjoyably brutal combat sections of the game. Equipped with a variety of powerful melee attacks, as well as a mouth mounted flamethrower, Grimlock becomes an absolute terror on the battlefield, and is certainly a point of the game that’s worth waiting for.

Aside from the campaign mode, the game also features a survival type multiplayer mode called ‘Escalation’, which makes its return from WfC. If you’ve ever played Halo’s ‘Firefight’, Gears of War’s ‘Horde mode’ or Call of Duty’s ‘Nazi Zombies’ then this will feel like VERY familiar territory. Like the campaign players take control of several iconic Transformers characters and are pitted against waves of enemies, and only through effective teamwork will the player’s ultimately prevail. However, the real standout multiplayer aspect of FoC is in the Multiplayer matchmaking mode. This game mode is set up as your basic online competitive shooting set-up. The really strong draw appeal of this mode is found in the character creation screen, where players are able to build, equip, edit, name and ultimately deploy their very own Transformers creations in multiplayer mode. By earning in game credits, or by levelling up, players can unlock more customisable parts, weapons and equipment with which to create different load-outs as one of four different class types: the stealth and speed oriented Scout class, the defensive based Destroyer class, the heavily armoured and destructive Titan class, and the high flying support Scientist class. By being able to deploy their own character creations, players feel far more invested in seeing their creations succeed in the online arenas than if they were just using preset Transformers characters. This makes victory feel all the more sweeter and defeat all the more bitter. If there’s one thing the multiplayer is good at, it’s getting the player’s emotionally invested in the match. 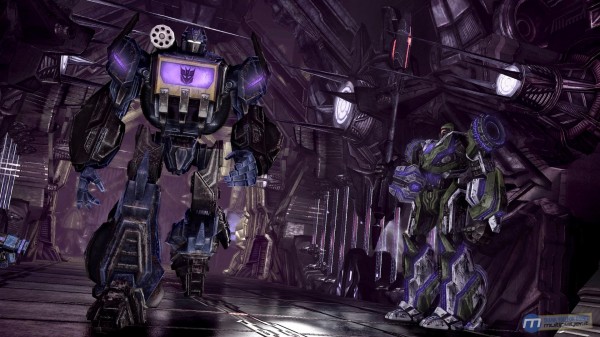 While it was disappointing to see some of the voice talent from WfC omitted from the sequel, the quality of the voice acting as a whole has markedly improved. Once again, Peter Cullen has reprised the role of the one and only Optimus Prime, as well as Fred Tatasciore also retaking the reigns of his arch nemesis Megatron. It speaks as much to the quality of the writing as it does to the quality of the voice actors when in-game dialogue is as good as what has been presented here. The dialogue is intense at points, dramatic when it needs to be, and features that classical Autobot snideness in speech. The musical score is also equally epic in nature. When players first access the main menu, they should let the opening song play for a while, just to set that orchestral epic tone for the rest of the game. And of course, it wouldn’t be a Transformers game if it didn’t feature that iconic transformation noise from the original generation cartoons. The audio quality of this game is stellar, no questions asked.

If there’s one thing to mention that has greatly been improved over WfC in FoC, it’s the visual style. While the character modelling and special effects haven’t changed too much, the best improvement has been made in level and environment design. One of the major criticisms of WfC was the inability to often tell different level elements from each other due to the overly metallic blur and similar visual design that was applied throughout. This time around, the designers have taken that on board and created a much larger variety of environments, and have now made gameplay and environmental elements stick out thanks to the addition of a more definitive outlining system for items and intractable objects. 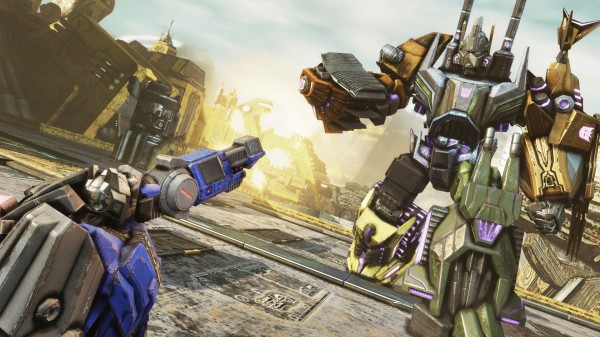 So, in the end, does Fall of Cybertron ultimately stack up as a quality title? The answer to that is a definitive “YES”. Although there are a few minor points of criticism in single player longevity and slight limits of choice, that doesn’t deviate from the fact the Fall of Cybertron is definitely one of the best additions to the Transformers franchise made in the last decade. The gameplay and story is well refined and expanded from the foundations that War for Cybertron previously set, and it’s just a downright fun and thoroughly entertaining game. There’s enjoyment to be found regardless of whether or not you’re an old-school fan, a new generation fan, or a gamer fond of great shooters. It’s able to boast both nostalgic value and still present itself as a brand new experience, a balance that is difficult to nail, but High Moon Studios have achieved it superbly. Plus it’s got giant robot dinosaurs; and how is that NOT awesome?