Overview
Are you the kind of person that will play a game while waiting for another game to load? Well, now there’s an app for that.

ToyBox, from Melbourne indie studio Barrel of Donkeys, is a bullet-hell shooter. It’s also a match-three puzzler. It’s a gaming griffin, a unique beast created from an unlikely pairing of familiar beasts. Games have long since settled into distinct genres, but there’s been a bit of experimentation with combining them lately, with interesting but mixed results.

So how well does ToyBox fare, in duct-taping together these two well-trodden, disparate genres? 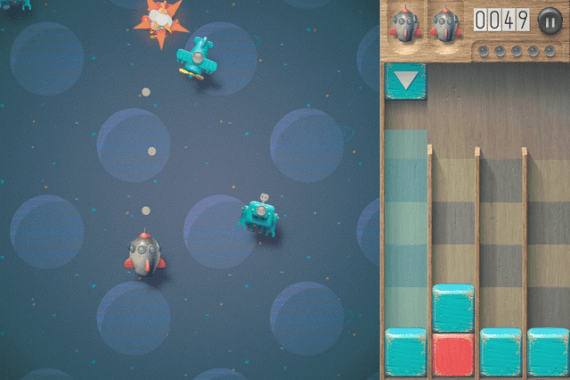 Gameplay
ToyBox is the result of a steamy, alcohol-fuelled one night stand between Galaga and Bejewelled. On the left half of the screen, you control a spaceship, shooting at endless waves of planes, robots and UFOs. Destroying enemies with flashing lights will cause a block of the same colour to fall into the grid on the right-hand side of the screen. You aim to match three blocks vertically, horizontally or diagonally. The more you match on the right, the better your weapons on the left. You get a single point towards your score for each destroyed enemy, and twenty for a match.

My relationship with the game followed an odd path. It started high, as the pairing felt pleasantly unfamiliar. Soon, my appreciation dropped, and I began to write it off as gimmicky. It suddenly seemed like two very basic games bound by a tenuous relationship. Nothing too interesting.

But the longer I stuck it out, the more I realized the depth that relationship offered.

My inclination towards labelling the premise a mere gimmick came from a perceived imbalance: the match-three half of the game seemed to play second fiddle to the shooter side. While there’s an ever-present threat to your ship on the left, there’s no sense of urgency to the puzzle on the right. If blocks stack up to the top of screen, the bottom row pushes down, with no penalty. You can essentially ignore it, and get through.

So I tried that. Happily, I was wrong. It doesn’t work. Both sides are equal parts of the whole; not only is each match of three worth twenty destroyed ships, but it clears the screen of enemies. As they get faster and more numerous, matching becomes absolutely vital to stay on top. If the ship gets swamped you’ll tend to focus on that side, but setting up a match will clear the screen: to defeat an urgent threat, you have to tear your eyes away from that threat. It’s an interesting concept.

Throw in the weapon upgrades and extra lives to be earned, and the idea of imbalance seems ridiculous. 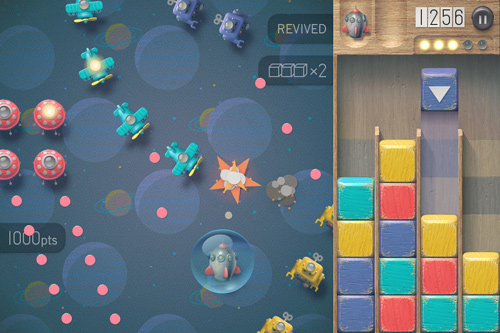 The ultimate goal is the elusive high-score, with online and friend leaderboards to urge you ever onwards. Each week the level will change, the leaderboard will reset, and players will begin score-chasing again on equal footing. Only one level has been playable so far, so I can’t say with certainty, but there may be potential problems with this model. It’s implied by an in-game hint: if the current level is too difficult, try next week’s. Encouraging players to not play your game is never a good thing. It’s why I couldn’t get into Tiny Tower: I’d be on the bus playing, I’d do all I could in a few minutes, and the game would force me to not play for an hour. After a few attempts, I stopped going back (although considering its popularity, maybe I’m the minority).

Thankfully, the difficulty curve is designed so that anyone should be able to get a reasonable distance into the level, still having a good time trying to break their own record. Maybe it won’t be a problem at all. We’ll give it time.

The other main issue is a product of the hardware: your thumb often obscures the action at essential points. Sometimes a narrow safe passage between enemy fire becomes very difficult to judge with your digits in the way. The developers apparently noted this, and gave the choice of three different control sensitivities. “Direct” is most problematic, as wherever your thumb goes, the ship goes. I found “Exaggerated” works best: small rolls of the thumb translate to large movements of the ship. It solves the problem for the most part, but it will still crop up occasionally. 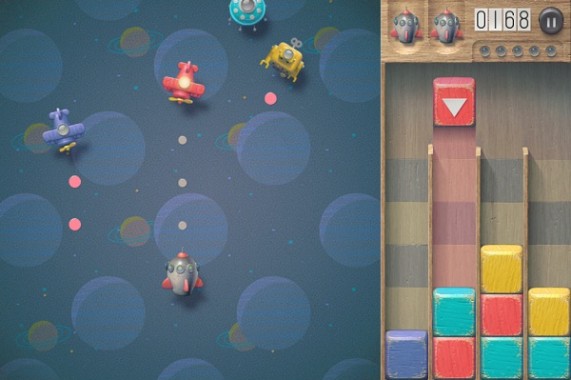 Visuals & Audio
Wrapped around this gooey gamey centre is a crisp candy shell, a pastel world of toy robots, ships and building blocks. With the gameplay so solid, the visual style and setting could be forgiven for being bland as hell. Thankfully, the Donkeys have put a lot of effort into presentation. Even on the small screen, the ships and UFOs project a 1950s tin-toy aura, and the imperfectly-painted blocks, with their visibly grainy wood, are quaint.

Through all this, you’re also partly creating the music as well. In an excellent example of sound design, a basic drum beat plays constantly, while every enemy destroyed nets you a note. It subconsciously encourages you to string together shots, to create more pleasing melodies.

Overall
ToyBox is a box of joy, an intriguing idea expertly executed and presented in a charming package. Simple at a glance, the game is a deceptively deep, relentlessly addictive debut title. Barrel of Donkeys have set the bar high, and no doubt we’ll be keeping an eye out for the next project.