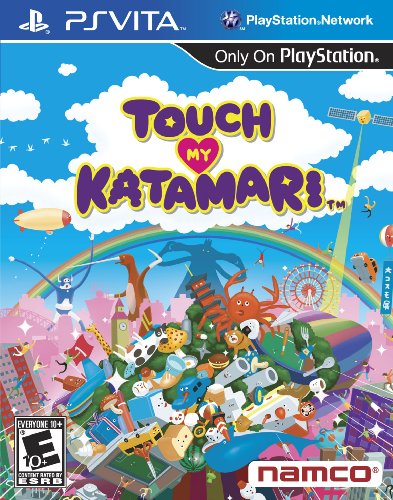 Overview:
The Katamari series has always been one that is instantly recognizable, as there are practically no other games in the market that follow its premise. Beginning with the original Katamari Damacy back in 2004 on the PlayStation 2 the series has seen many iterations over the years however most of these sequels and ports to various platforms were seen as simple cash-ins and weren’t well received by critics. However with the launch of the PlayStation Vita Namco Bandai is looking to bring the King of Cosmos and his Prince back into the limelight with Touch My Katamari. Is this a title to stick into your PlayStation Vita as you roll around the neighborhood?

Story:
It seems that all of those years of fans seeing his games as simplistic and all of the various re-releases as beating a dead horse has affected The King in a serious way. He is all washed up and even he realizes that his in-game fans have lost their love for him as they vent their frustration at him and talk to one another in an all too realistic manner. This is an interesting addition to the story, as Touch My Katamari is all too self-aware about the past titles in the Katamari series. 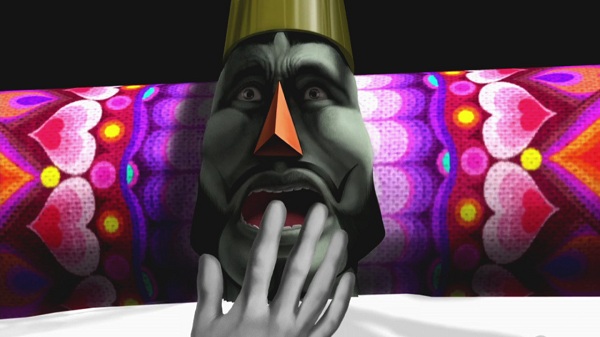 However the King isn’t a man to take things lying down and he sets the Prince out to address these problems and make everyone happy. However a Katamari title wouldn’t do without some sort of side story running alongside the main story. As players progress there are various animated story chapters that follow a hikikomori (shut-in) gamer that is struggling with trying to grow up and live a normal life but still loving his otaku culture. To put it simply, Touch my Katamari provides yet another hilarious story full of self-aware snarkiness and the same off the wall content that the Katamari series is known for.

Audio & Visual:
The Katamari games have always had a certain aesthetic charm and Touch My Katamari is no different from any of the others in the series in this regard. The world of Touch My Katamari is full of boxy people, boxy animals, practically boxy anything all colored with easy on the eyes pastel colors, though be prepared for plenty of brightly colored custcenes. The King of Cosmos still looks as outrageous as ever, though some people may be a bit scared with his new more-human looking face. 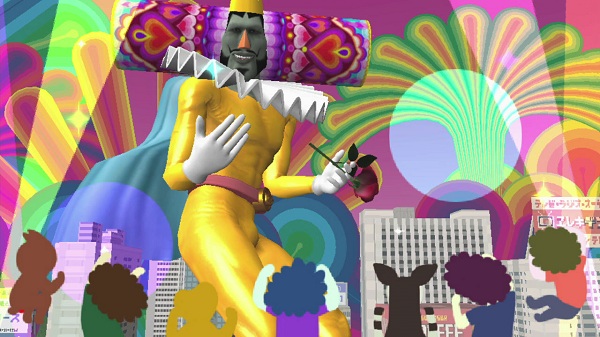 As players roll throughout the levels they will be treated to an infectious J-Pop soundtrack with plenty of enjoyable songs that have a dangerous chance of getting stuck in your head, and also match perfectly with the style of the game as you roll throughout a level and pick up dice, dogs, children and even buildings as each level is chock full of items able to be picked up, practically everything in a level can be stuck to your ball.

Gameplay:
For the uninitiated, Touch My Katamari is all about rolling an extremely sticky ball throughout a level and getting everything possible stuck to it as you roll around trying to make your ball as big as possible. You will start by picking up very tiny things such as erasers, pairs of dice and the bigger your ball gets the larger stuff it can pick up. Touch My Katamari doesn’t break any new ground as far as goals go however, as players will still be performing the same task.

On the other hand, Touch My Katamari does change things up occasionally by providing various challenges that must be fulfilled or goals that must be met, such as using only a certain amount of objects to increase the size of your ball to the required amount or even picking up only a certain type of object. These offer a bit of a different challenge but still don’t stray too far from the standard Katamari experience. 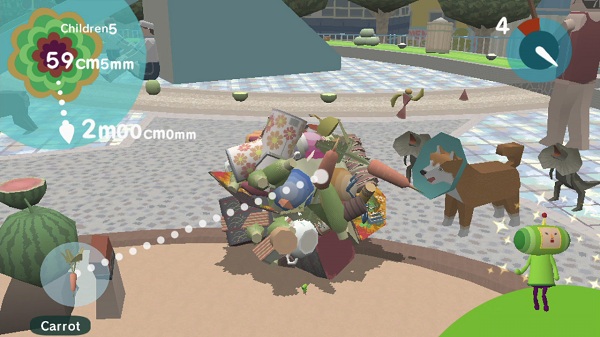 As you play through you will earn Candy which is then able to be used to unlock more songs for your auditory pleasure, more outfits which you can then use to dress up the King in his own little dress up room and then scare others with how creepy he can look at times or other unlockables such as the ability to play endlessly on certain levels or control a faster sped up version of the ball. Those looking to play with others will need to look elsewhere however, as the only multiplayer mode is through the Vita’s Near app which allows gamers to find other players locally and try to beat their records.

One noticeable improvement that Touch My Katamari has over past portable versions of the Katamari games is that this is the first time that we are able to control the system using two analog sticks, which means the game is able to be controlled exactly like the original console versions of the game were. However for those who want to get the most out of their Vita’s capabilities you can also use the touch control options to move the ball around; however this flicking motion is something that ended up becoming tiresome quickly as the control system with the analog sticks was much easier to use. 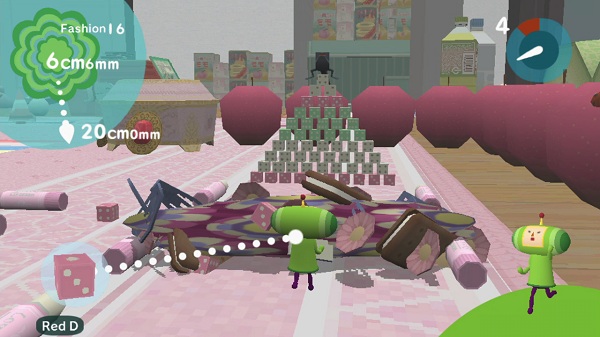 The other two touch mechanics included however are much more useful and are enjoyable to use and provide a bit of fresh air for the standard gameplay. New for the Katamari series, players either stretch or compress their ball by using a two finger pull or pinch motion on the screen. Players are able to pull a wide flat Katamari that appears similar to a rolling pin that will pick up smaller items in a wider rolling path, while the compressed version may make it easier to reach areas that were previously inaccessible.

Overall:
When all is said and done Touch My Katamari doesn’t break the mold of the Katamari series however it does make enough interesting adjustments that will motivate fans and newcomers to come give it a shot. There still isn’t too much extra to do besides roll your ball around and collect various objects, but in the end it is just plain enjoyable. However some Katamari fans may be put off by the fact that in the end, Touch My Katamari is nearly more of the same game they’ve seen multiple times before.

Touch My Katamari is a title that both looks and plays better than ever and also epitomizes the fact that portable gaming allows the player to roll around picking up objects for a few minutes and then put it away without any harm done, easily making Touch My Katamari the best portable Katamari game to date.