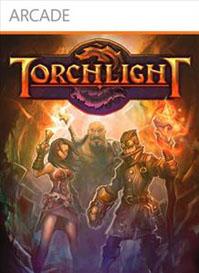 Two years after a highly successful PC release, Runic Games have now brought the much loved Torchlight to the Xbox Live Arcade. If you have never heard of Torchlight before, it is an action rpg in which the player must constantly battle monsters and explore dungeons while completing quests and making upgrades to their character’s stats. This version of Torchlight is relatively the same as the PC release, except with some minor visual upgrades and new in-game content as well as a brand new control interface for the Xbox 360. Here is my review for Torchlight for the Xbox Live Arcade.

Story
This title’s plot puts the player in a fantasy world and in a town by the name of…you guessed it, Torchlight. Torchlight is built right above mines that are rich in Ember, a source of powerful magic in which the whole plot revolves around. Shortly into the game, you learn that this power is starting to corrupt monsters in the below mines, so your character must set out and take down evil that lurks in the dungeons while tackling a plethora of side-quests for inhabitants of the town.

The main plot isn’t very deep and quite simple, but for this title that isn’t a problem as everything in the game is simplified and quests mainly serve as a small purpose to go explore the depths of the various dungeons. The story is mainly told through the other characters you run into as well as a narrator that sets the scene for whichever upcoming area you may be approaching. This method of story-telling works well as there are no interruptions from actually playing the game. I had no problem though feeling involved enough to want to talk to every character and explore every crevice of each cave or dungeon, so progression just comes naturally while the easy to follow plot unfolds on your journey. 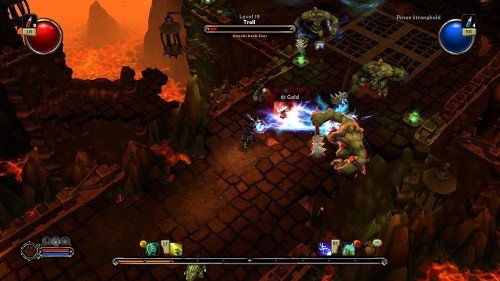 Gameplay
As soon as you start up Torchlight, you are given a choice on picking one of three character classes which determine not only the way your character plays, but also their appearance. The characters include the Destroyer, who is basically your standard warrior, the Alchemist, who specializes in magic, and the Vanquisher who is best for ranged weapons and traps. After you choose your character and pet, the player is then introduced to the town of Torchlight in which you will start gaining quests to complete.

Each dungeon beneath the town hosts a ton of monsters and enemies to slay, but what adds the extra incentive to defeat each foe you come across is the heavy amount of looting within the game. A good portion of the monsters in Torchlight drop items. Some of these are as simple as a potion while others might drop a rare piece of equipment which may be very useful in combat or simply worth its weight in gold. Every time you loot an enemy, the items are then instantly filed in your organized inventory, where you can then either equip or use the said item or hand it over to your trusty pet for a quick sale (we will touch up more on pets in a moment). This constantly rotating looting system is handled well by the the easy to use menus which make sorting all your spoils a breeze. Enemies are not the only ones with loot though as there are plenty of breakable barrels, chests, and plot-specific points which hold various treasures that make exploration all the more rewarding as you progress. 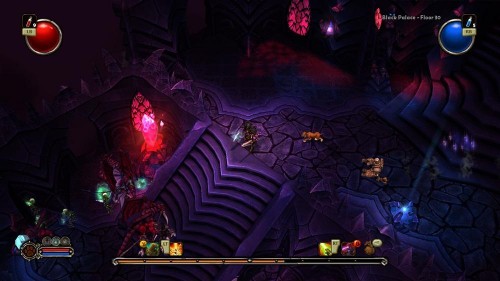 The biggest problem with PC to console ports is usually the control system in one form or another. Thankfully, this is not a problem whatsoever for Torchlight as the new control scheme was perfectly streamlined for the Xbox 360 controller. Attacking each enemy is as simple as mashing down on the X button, while other skills your character learns upon leveling up can all be mapped to either of the triggers or the remaining face buttons on the controller as well as the D-Pad later on. Not only is this method ridiculously easy to use, it also feels comfortable and lets you concentrate more on swarms of enemies rather than fighting to remember where each command is located on the controller.

My favorite part of Torchlight period though was my trusty pet. The Xbox Live version hosts 3 different pets, those being a dog, a cat, and the exclusive Chakawary, which resembles a small dragon. Your pet plays a much larger role than just being a companion on your many quests, as each pet will be right at your side fighting with you and even can learn spells as you progress. As odd as it sounds, fish also play a huge role with pets, letting them transform into different beasts for a short period upon consumption, playing a huge card into your favor upon tougher battles later on in the game. The most useful feature of a pet though is the ability to send them off to shops to sell your loot. Many times in the game you run out of room in your inventory due to the heavy looting so the ability to have your pet take care of this task for you keeps the rotating door of inventory and gold flowing so you can battle on uninterrupted. 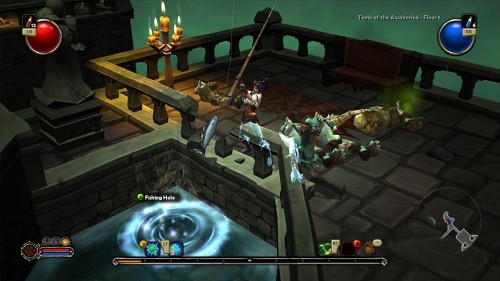 Each character has their own skill tree which can open up new abilities and techniques as you level up. Stats are also given upon leveling and are a must for being able to equip stronger weaponry and armor alike. Whether it be staffs, scepters, swords, or any kind of form of offense (or defense for that matter), there is plenty to choose from, making it even more rewarding to loot as there is plenty of useful equipment to be found in just about every dungeon. A small crafting system also comes into play, letting you enhance your arsenal with enchantment or by adding ember to a weapon or piece of armor to boost stats as well, and while just a small touch, it just is another reason why Torchlight delivers when it comes to creating in-depth experience all around with every element of gameplay tying together to create some well oiled gameplay mechanics.

Sadly, there isn’t any multiplayer in Torchlight. There is however the option to gift friends items and online leaderboards, which is sure to add a little more interactivity and competitiveness in players, but looking at the game as a whole, it becomes clear how a co-op mode could have made Torchlight a serious contender against titles like Borderlands, Fable, and even Fallout.

Graphics/Audio
Torchlight has a very unique and quirky art-style which combines the somewhat cartoon-ish 3D characters with the vividly detailed backdrops. The good news is that this works and is visually appealing. There are times where there can be an endless array of enemies all dishing out fully animated attacks at once and yet again, this graphical set-up stood strong and never had any problems with hiccups or framerate issues. The isometric camera view also fits in perfectly, with the ability to zoom in or out at anytime. 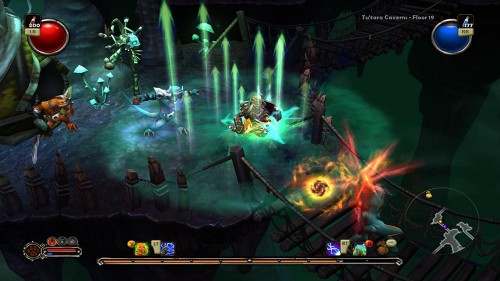 Musically, Torchlight has quite a soundtrack, playing a vast array of tunes as you move from floor to floor, with intensity of the music rising upon boss fights. These tracks are not the most memorable, but they do add in some nice atmosphere into the game itself. The voice acting is also well done, though most of the praise for audio must be given to the sound effects of the game, as little things such as a swift whack of a staff or the zap of electricity make performing attacks and spells much more exciting.

Overall
Torchlight is the game to get if you are new or even well familiar with any titles from the genre. The simple yet interesting main plot, complex looting and battle mechanics, and even the nearly perfected new control scheme all tie together to form a strong engine that puts the actual gameplay at the forefront of the experience. This title also has the best use of pets in an RPG I have seen to date, putting our animal friends we have seen in other “A-List” RPGs to shame. It isn’t too often when you see an RPG that can be labeled as addictive, but there is just something about Torchlight that makes you keep wanting to keep going back for more.

I Give Torchlight for the Xbox Live Arcade: