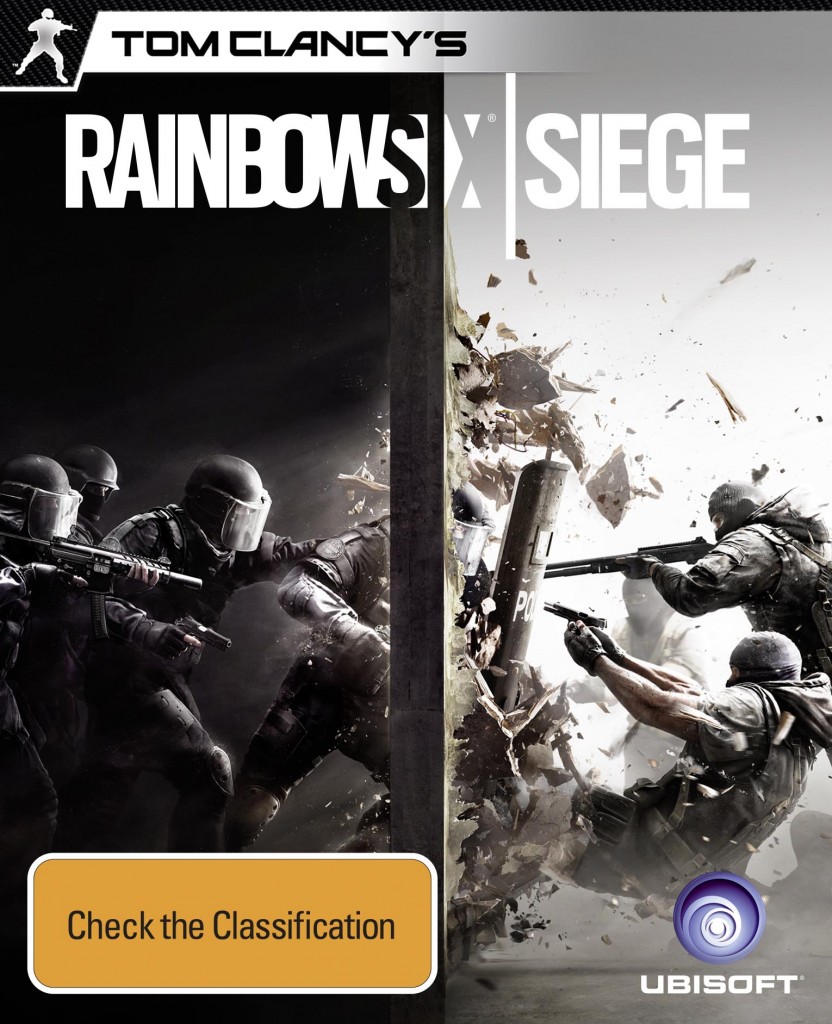 A new terrorist threat called the The White Masks has risen and Rainbow Six is reactivated by Six (Angela Bassett). Recruited from the finest counter-terrorist units from around the world, the new Rainbow Six team must fight against a new shadowy terrorist organization that seemingly has no goal. Tom Clancy’s Rainbow Six: Siege’s story is more a rough explanation on current events than an actual plot. The Situation mode serves as an extended tutorial than an actual campaign mode. Article 5, a special story mission is available after all Situation missions are complete, and it is the only story mission there is in the entire game. It is a crying shame because Article 5 is an excellent teaser to a good plot that left me wishing for more. 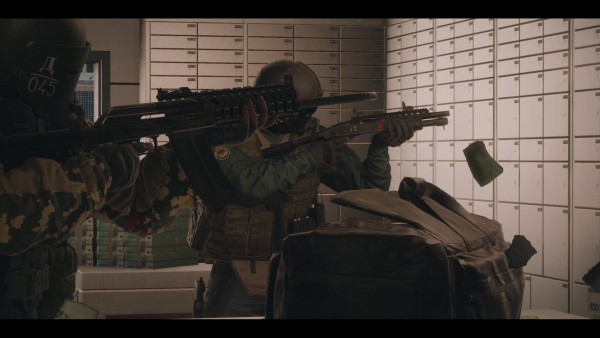 Tom Clancy’s Rainbow Six: Siege sits on the higher end of the realism spectrum, though it is not a full blown tactical simulator. The damage is high enough that a well placed high calibre round to the upper chest is a one shot kill, though a character can usually absorb two or three bullets before being downed. Unless struck in the head, players are downed and can be picked up by a teammate, which makes the game a little more accessible to the Call of Duty generation. The game is still short of the realism level compared to the original Rainbow Six games, but I think it has hit a happy middle ground.

Destructible environments are the big draw in the latest iteration of Rainbow Six. Walls made from dry wall or similarly flimsy material will let bullets through. Smart players can punch holes into walls and barricades ahead of time to line up a small firing hole or shoot careless enemies through the wall. Destructible walls that are supported by wood framing can be destroyed completely, opening not only new lines of fire, but also a new entrance point. Defenders can try to control the flow of battle by installing reinforcements on destructible walls, but are limited to two plus one for each time they go through the lengthy resupply process. While the destructible environments do not exactly reinvent the wheel, it helps cut down on the repetitiveness found on traditional maps. 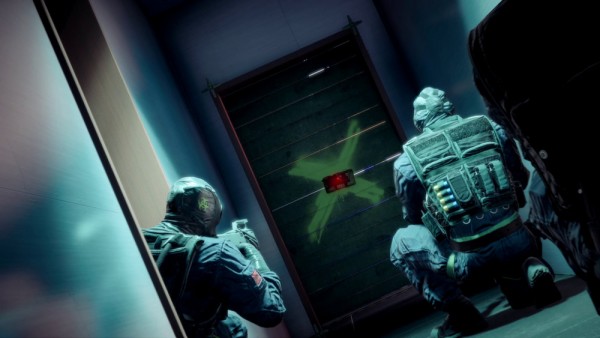 Ubisoft Montreal has decided to buck the trend when it came to designing player characters. Instead of giving players a blank canvas and thirty to forty guns to choose from, Tom Clancy’s Rainbow Six Siege takes a more MOBA type approach that is a nod to older titles. In the early days of the series, each playable character in the game had a name and a small backstory, often taken from the Rainbow Six novel. Siege takes the idea of actual characters, called Operators, one step further by giving each one a unique skill and a limited number of weapons. Operators are split up into two groups, attackers and defenders. Currently, the balancing for skills is decent, though there are definitely certain operators that are much more useful than others. For example, Jäger’s anti-grenade capabilities are a must have for any hostage defense mission in terrorist hunt, while Thermite’s ability to break through reinforced panels is necesssary in any multiplayer scenario.

There are two main modes in Tom Clancy’s Rainbow Six: Siege. Multiplayer is the game’s main 5 vs 5 PVP mode that pits players in three different game types. Teams will rotate between attacking and defending in secure the area, hostage rescue, and defuse the bomb. The first team to win three rounds wins the game. Rounds are short, with only a minute in the prep phase and a few minutes of action. There is only one death per round, which makes the atmosphere extremely tense.  Terrorist Hunt makes its return as the game’s co-op mode. There are four modes. Terrorist Hunt Classic has the team attempting to kill all enemies on the map. Bomb Defuse will have the team attempting to defuse two bombs on the level, with the attackers becoming the defender for short bursts. Protect the Hostage and Rescue the Hostage are self-explanatory, though Protect the Hostage happens to be the only mode where Defenders are available for play. Terrorist Hunt has three difficulties, with standard normal difficulty posing a good challenge for an uncoordinated group of strangers and realistic difficulty requiring a full team of coordinated players using microphones. 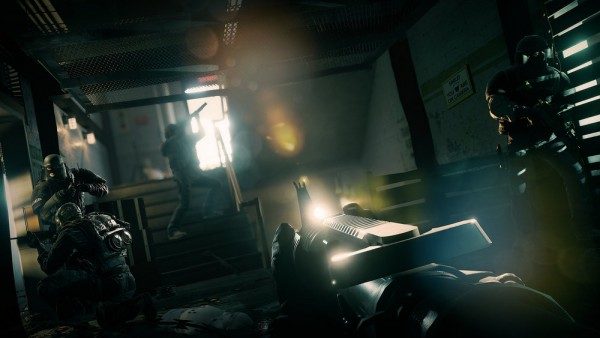 Tom Clancy’s Rainbow Six Siege has little to offer to single player gamers. Situation mode provides the only real single player action, and frankly it is half baked at best. It serves as an extended tutorial for the game that overstayed its welcome by around seven missions. For a game that emphasizes so heavily on teamwork, dragging out the Situation mode as long as it did without any real plot is pointless filler. The only good thing that came out of Situation mode is Article 5. It is the only real story mission and, unfortunately, it must be played with random players. Article 5 is probably one of the best missions in the game, which makes its existence all that more disappointing. I believe the Article 5 mission proves that Siege would have benefited from cutting out a good chunk of the Situation mode missions and replaced them with a short series of co-op story missions.

The game is packed with eleven maps and the promise that all future maps will be free. Instead of a traditional Season Pass format, Ubisoft has opted to provide all future maps and operators free. While maps are provided to all for right from the start, future operators will cost 25,000 Renown points. In comparison, the base operators only cost between 500-2000 Renown to unlock. Season Pass holders get to jump the line and get their operators unlocked 7 days early for free, along with Renown boosters, premium credits, and weapon skins. The current maps are well designed for multiplayer mode. Defender spawns are randomized and tend to favour the more balanced spawn points. On the flip side, there are a few maps that have a spawn or two that can easily funnel Terrorist Hunt enemies into two or three spots, making things a little too easy. 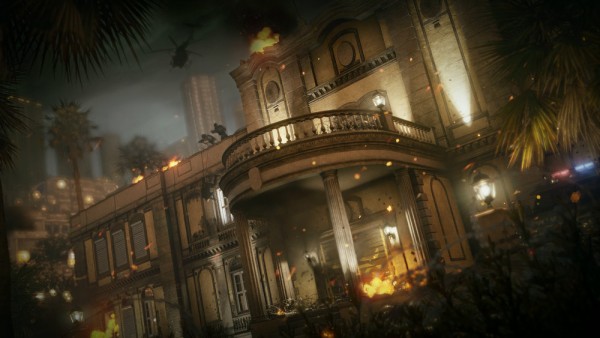 Realistic FPSes and their control schemes have always been a hot topic. Some games prefer to go the full sim route, with enough keys to make a flight sim gamer feel at home. Others prefer the tried and true simple FPS controls. Tom Clancy’s Rainbow Six Siege strikes a pretty good middle ground by taking the classic modern FPS controls and adding a lean function. The lean function works in all three stances, including prone. The controls are simple enough to let veteran gamers move around with a familiar movement set, while still being able to maintain the realism of squeezing oneself behind cover and providing as small of a target as possible to the enemy.

The weapon balance is good, though shields are a still a work in progress. The series of closed and open betas for the game has changed how the shield handled and the accuracy of the paired pistol quite a bit. Even on release, Ubisoft has yet to find the right balance for the piece of equipment. It is an improvement over the beta period where shields were too overpowered, but it seems like the pendulum has swung a touch too far in the opposite direction now. As it stands, shields are focused purely on absorbing a majority of bullets and players cannot hit the side of a barn with the paired pistol, even with the laser sight attachment that is supposed to improve hipfire. 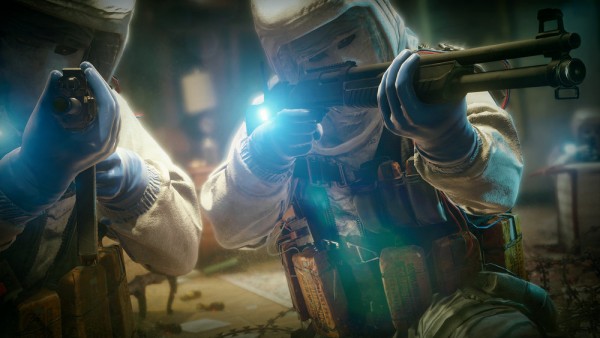 The game is still a bit on the buggy side. Server issues are probably the biggest problem right now, with some people disconnecting from party or not loading in at all. A distracting physics glitch that causes dead enemies to vibrate uncontrollably on the floor popped up several times too. The bugs are slowly being stomped out, but at time of publication, there is still room for improvement.

Tom Clancy’s Rainbow Six Siege is a brutally difficult game that relies on good communication and teamwork. Between friendly fire, one life per round, and high levels of damage, teams who fail to communicate over voice chat and work together lead to extremely frustrating experiences. If you can bring friends, the focus on teamwork makes for great fun, but solo players who aren’t willing to initiate some sort of teamwork over VOIP may struggle with the game. 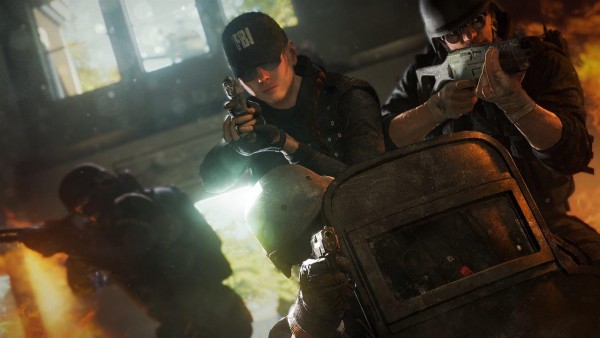 I am pleasantly surprised by Tom Clancy’s Rainbow Six Siege’s art direction. These days, it is very hard to tell special operations units apart. Even Russian special forces units have been spotted with the seemingly standard Multicam pattern uniform, MOLLE plate carrier, and ear protection compatible ballistic helmet. Instead, the team at Ubisoft Montreal opted for a retro look with a few modern sensibilities to create five distinct counter terrorist units. It’s a great idea that gives the game a unique flavour. The animations are excellent. I am particularly pleased at the attention to detail. For example, operators automatically opt for a traditional prone position or the urban prone position depending on their position. The models and textures look nice, though a modern video card with more than 2GB of RAM is needed beyond medium settings.

The music is solid, which is to be expected of an AAA title. The voice acting is excellent, though Angela Bassett’s much touted role was much smaller than expected. The sound effects are really important in a tense and realistic type shooter as being able to hear the enemy provides a huge tactical advantage. Tom Clancy’s Rainbow Six Siege delivers not only excellent sound effects, but also a very good sound stage. Directionality of footsteps can be easily picked out with headphones and rustling of equipment can be heard through window barricades, giving defenders a few seconds to prepare. 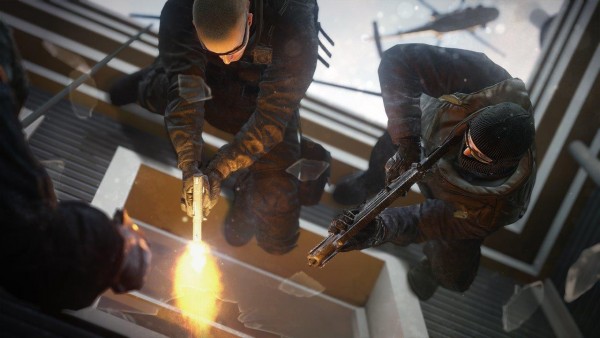 Tom Clancy’s Rainbow Six Siege is not reinventing the tactical FPS wheel, but it is making some intriguing changes to a very tired genre. The game is a boot in the right direction for the long running franchise, but considering how long we had to wait for it, I think it would have been okay to wait a little longer. There are some bugs that need to be ironed out, balancing that still needs to be done and more content that needs to be added before the game feels like a complete AAA title, all which could have been addressed with some extra development time. With friends, Tom Clancy’s Rainbow Six Siege is an absolute blast, literally and figuratively; however, it gets much harder to recommend as a solo player considering its flaws.
Capsule Computers review guidelines can be found here.

Tom Clancy's Rainbow Six Siege is a fantastic competitive shooter in need of some final polish and some better single player content.
7.5