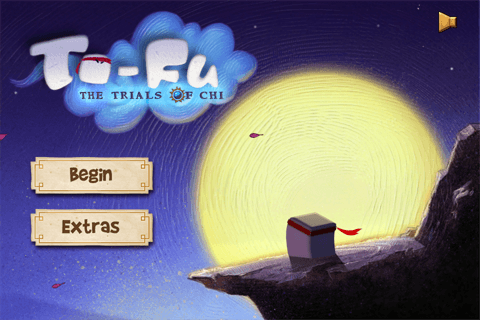 I love nothing more than a good 2D platformer. Sadly, most entries to the genre on mobile devices leave a little to be desired. The problem with most platform games on a smartphone is the lack of buttons. I’ve played far too many apps shoehorning in a d-pad and buttons onto a touch interface instead of trying to develop something designed specifically for the device. To-Fu: The Trials of Chi is the latter, not the former. This is a game that wouldn’t be capable on any other platform. You control a small little piece of ninja-tofu as you fling him around the environment dodging spikes, saw-blades and lasers in a mad attempt to get to the fortune cookie at the end of the level. Why a fortune cookie you ask? Well To-Fu needs not explain himself to the likes of you. Just do what you’re told and read the review. 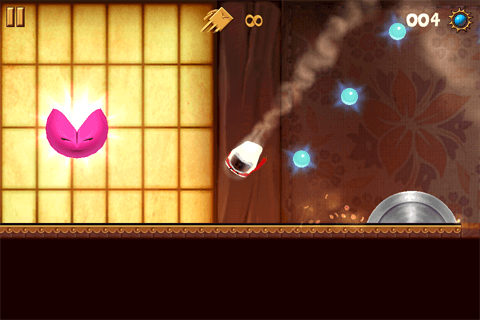 I can’t help but think that To-Fu: The Trials of Chi is the iOS answer to Super Meat Boy. As where Meat Boy perfectly takes advantage of it’s platform with fine tuned twitch controls and network integration, so does To-Fu with it’s touch based flinging mechanic. You simply grab To-Fu with your finger, hold him in the direction you want to go and let go to fling. There are metal plates for you to bounce off and glass for you to slide down in addition to the wood that you stick to. Control in To-Fu is really a huge selling point. There was never a time where I died and felt it was the fault of the game and not my own. Which is a fine thing to find in a platform game and pure magic in an iOS title. 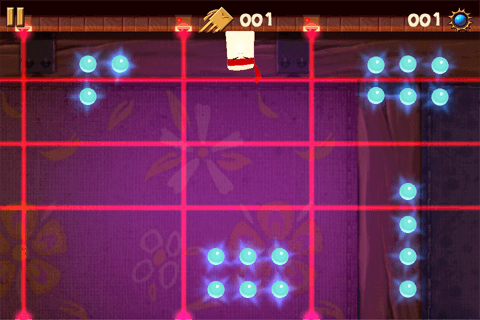 The levels aren’t too long, never taking more than a minute or so to get through which is perfectly suited to gaming in bite sized chunks. There are a total of 100 levels in To-Fu, with added replay for finishing within the allotted amount of moves and collecting all the orbs. I have to say, going through the game again and finishing everything with a limited amount of steps really showcases how good the level design is. There are some stages where you really have to think outside of the box as to how you’ll get to the end with just a couple of moves.
Tragically, there’s no Game Center support. I really would have loved to have a healthy achievement list to egg me on, and leaderboards to compare completed levels and minimum movements with my friends. I’m already going through the game again and finishing everything because gameplay and level design is just that good, so I suppose I don’t really need that carrot on the stick to keep me going. But I sure would have liked to have that cherry on top. 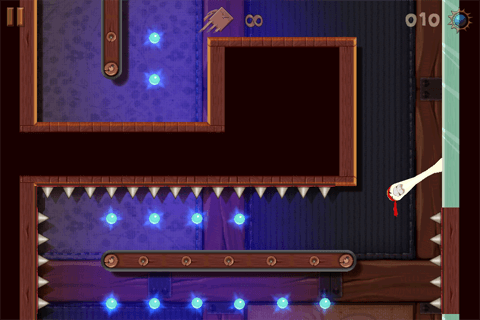 I’m at odds with the presentation in To-Fu. Don’t get me wrong, the game is beautiful. The design and direction is fantastic. To-Fu is wonderfully animated, the game is rendered in a beautiful 2.5D (characters are in 3D as the environment is 2D) and everything is just chalked full of charm; but the look of the levels never really change. When I started the game I was enamoured with how everything looked. But over the course of 100 levels I never really saw that mixed up at all. I understand that it’s supposed to be a series of trials, but they could have changed the look up a bit. The other minor problem I had was with the music. Again, when you start off the game it all seems very charming, but once I realised that it’s basically one song on repeat I quickly turned the music off. I find that I play a lot of iPhone games this way anyway as I’m usually playing as I commute so this may not be a big problem for most people, but I figured I should make a note of it. The truth of the matter is though, I’m being extremely nitpicky here. None of these small gripes I have with the game really deterred me from finishing it, nor did it hurt my overall opinion of the game that much. It’s just that the game is really, really fantastic. And with a couple of small little things added in, I feel it could have been a true groundbreaking classic. 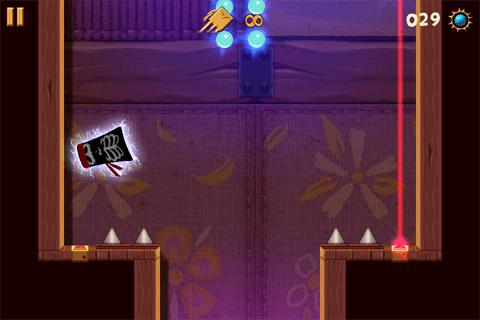 I’m not going to lie. I LOVE To-Fu: The Trials of Chi. It’s a fantastic experience that I would recommend to just about anyone. Anywhere. Anytime. Any small gripe I may have had with it is just that; a small gripe. Nothing should dissuade you from picking up this beautifully crafted gem. I implore you. Go now. Fling that To-Fu. You deserve it.