Everybody’s favourite god, (Wow I’m probably going to get in trouble for that one), Thor, is back!  Marvel has struck the world like lightning with Thor: The Dark World and a mobile video game along side it. Developer Gameloft has taken a lot of risks with this title, stepping away from the expected and surprising players with a fresh take on controlling the popular Asgardian. Gameloft has been on a warpath lately when it comes to developing super hero movie tie-ins. While some have been expansive, engaging, enjoyable adventures like The Amazing Spider-Man and The Dark Knight Rises, Thor: The Dark World follows in the footsteps of Iron Man 3 of being just another free to play casual title with great presentation and repetitive gameplay that ultimately fails at putting the “mighty” into “The Mighty Thor”. 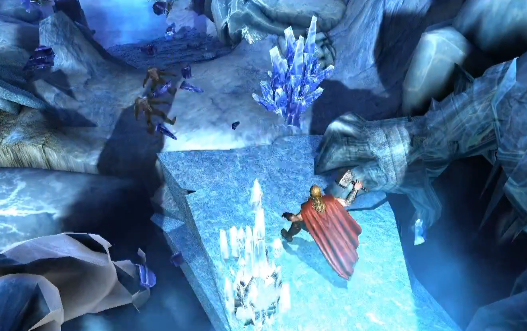 Like I said earlier, Gameloft should be commended for thinking outside the box here. Thor’s stand alone video games have typically only placed him in the third-person brawler genre with disappointing God of War rip offs. Instead, Gameloft has gone a dungeon crawler inspired rout, with gameplay elements previously seen in titles like Diablo or Dungeon Hunter. Players control Thor as he runs through levels to reach the end, fighting all those who cross his path. To help him, he has an army known as Einherjar to aid him in battle and can earn (and purchase via in-app purchasing) three different currencies to help him upgrade his weapons, armour and more. Now let’s stop right there and look at how that fits into the character’s mythology.

Why the hell would Thor need to upgrade his hammer? Mjölner is meant to be one of the most powerful weapons in the Marvel cinematic universe. It rivals Captain America’s shield and not even The Hulk can pick it up. Plus he’s a god. How the hell is anybody meant to upgrade a god? It makes no sense and it’s just an excuse to put pressure on people to spend money. Furthermore, yes in the movies Thor does fight in an army, but nothing like they do in this game. AI is incredibly stupid it’s straight up embarrassing. Warriors of Asgard, defenders of the nine realms, will literally walk into fire and stand there until they die. Thor, their leader, can’t even command them. With no options or controls to control the Einherjar, all concepts of strategy or tactics are thrown completely out the window.

All the player can do is upgrade these idiots, get more idiots, and tell them to regroup every now and then. Besides that, they just march on and fight mindlessly. Furthermore health is seldom and expensive, so the player is often encouraged to fight less and play defensively, letting the suicidal Einherjar fight the battles for you. Yes, this is a unique concept to apply to the character Thor but it makes no sense. After being sick of this, I spent quite a bit of money via in-app purchasing to upgrade my character. This worked but then Thor became greatly overpowered, deleting all challenge to the game. Sure, it became a little more fun but ultimately all it really did was reenforce my original point. If you need to spend money to make the game fun that’s a sign of a bad game. 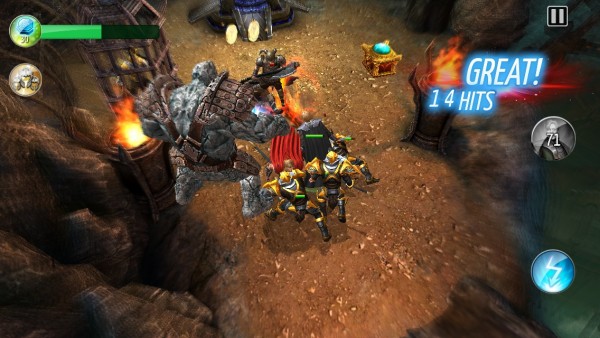 Whenever you’re not upgrading and letting the horrible AI battle, you will also be battling opponents, bosses and the game’s awkward controls. Players move Thor not via a digital analogue stick but instead but touching the screen, which is also the same way you choose who you’d like Thor to fight. This would generally be fine if it wasn’t for the fact the camera is so zoomed in you can’t see much of the map and will constantly have you accidentally touching the many on screen controls. So sometimes you’ll want to walk forwards but will end up pausing the screen or using a thunderstorm attack instead. Or maybe you want to fight an villain but instead Thor will just awkwardly stand next to him. Another awkward element of controls is throwing the Mjölner.

Tapping with two fingers, Thor will throw Mjölner. However two fingers covers a bit of space and isn’t always perfect. It’s not as awkward as movement, but it adds to the awkwardness. Even more disappointing is the fact the final world isn’t even available yet and is “coming soon”. Yeah that’s right, it’s an unfinished game you’re playing. It’s not all bad though, occasionally gameplay is broken up with defence-based levels where you need to defend a particular area, and the inclusion of allies is a nice touch as well. Also, you don’t need to finish a level to advance in the storyline, but honestly I’m just fishing for compliments here. All the merits of the gameplay aspect of Thor: The Dark World are greatly shadowed by it’s devastating flaws. 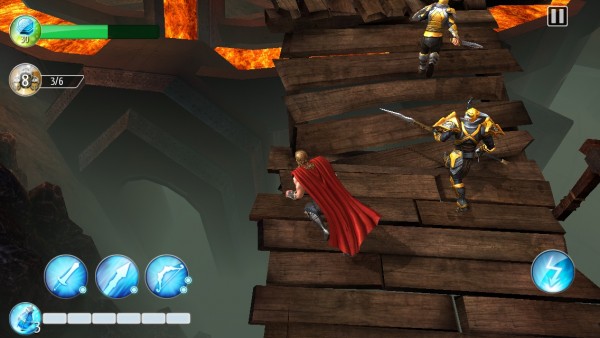 Thankfully, Gameloft has saved this game with outstanding presentation. Character models are superb and the developers have done a great job of making them look just like the actors who portray the characters on film. Textures are vibrant and animation is generally good as well. Music has all the horns and sounds you’d expect from a Thor game and while it doesn’t sound like the original actors are providing the voices, these impersonators do a spot on job. Honestly it’s the graphics and audio that make this game worth playing, and saves it from being a terribly disappointing experience to just a slightly disappointing experience. 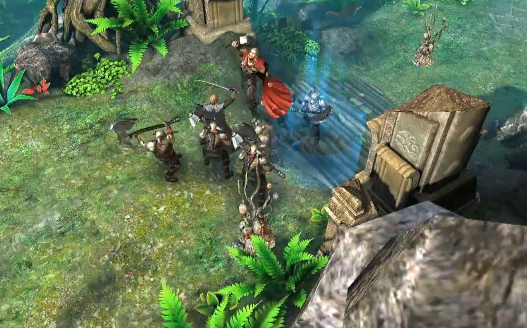 Thor: The Dark World  is sadly an average film with a below average video game. Controls are awkward, AI is terrible and the lack of controlling Einherjar doesn’t help.  The concept of gameplay doesn’t seem suit the character well, the currency system is overwhelming to say the least. Sure the graphics are impressive and the audio is fantastic as well but that’ll only keep you around for so long. Still with plenty of content at hand, the fact it’s free and some nice fan service thrown in, some hardcore Marvel fans may find some redeeming qualities in this title. For everybody else however, I’ll have to put down the hammer and say nay to this one.