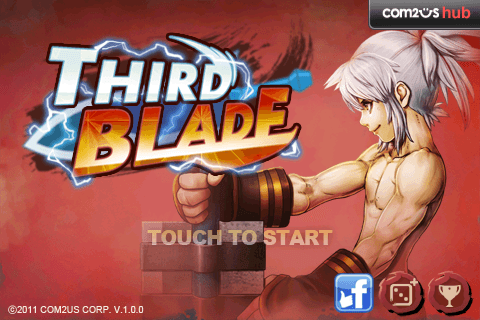 With a history of releasing great titles for iOS, it isn’t a surprise that Com2Us’ latest game, Third Blade, should be any different. Third Blade fits into the classic model of an action role playing game, with the ability to swap between three different weapons, hence the title I assume, weapon upgrades and an onslaught of enemies just waiting for be destroyed. It’s time to arm yourself and head into the mysterious fantasy world of Third Blade. 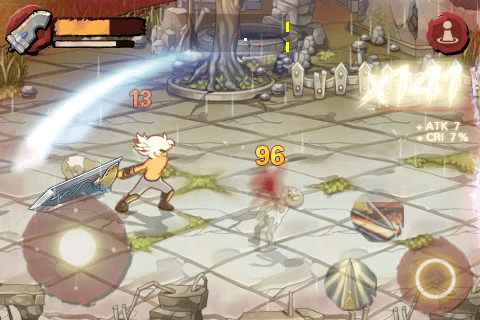 Third Blade is a pretty standard RPG. You roam through a series of levels, vanquishing foes as you run through fields, swamps and a variety of other places that normal people wouldn’t dare tread, especially considering zombie-type things or monster slugs inhabit them. There are three options of weapons in Third Blade each with positive and negative aspects to their use. The standard weapon is a katana; it is fairly average in speed and strength. There is also the option of smaller knives that are particularly fast or a huge sword that is painfully slow but packs a punch. Each of these three weapons also comes with the ability to use magic when attacking. The magic attacks have their own buttons next to the attack button on the right hand side of the screen. Once pressed, it takes a certain amount of time before the manner is built up and the attack can be used again. This process is pretty universal for action-RPG style gaming. 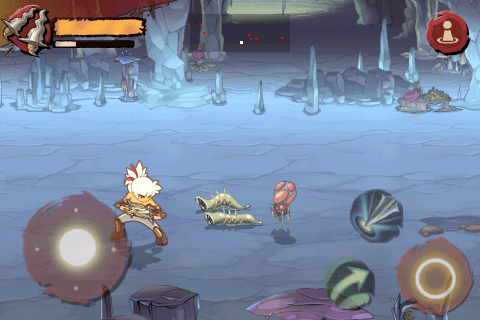 Like any RPG, there is the ability to upgrade weapons and purchase new magical skills. At first I was a little annoyed by the interface. To change weapons you need to reach all the way to the top left corner, and after purchasing some new magical skills, I noticed that their buttons came further out on to the screen. After a few more attempts playing the game, the magical skills being right there really work and make it easy to combine them in order to smite foes. The weapon-changing button is still slightly out of the way for my liking, but in reference to the actual gameplay it doesn’t really matter. I basically choose the weapon I like the most and stick with it, sometimes changing when given a few spare seconds so I can use some heavier hits on bigger enemies. Once you get the hang of the game, which doesn’t take all that long, you hardly realise the button placement. The amazing graphics and abundance of enemies keeps your attention pretty focused on the screen and the musical score really sets the scene of an epic battle. 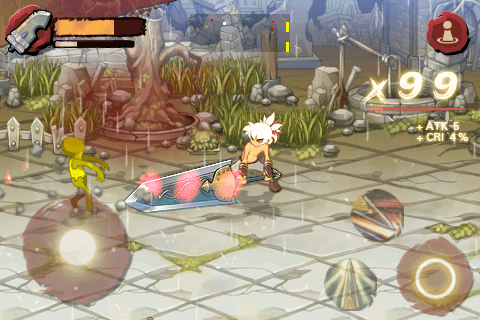 As previously stated, the graphics in Third Blade are amazing. The game is completely two-dimensional, which means the characters might come across as a little cartoon-like. This isn’t necessarily a bad thing. In the earlier levels the enemies are a little dull in their design, often some weird zombie-creature or slug. As the game progresses so does the character design. The hero stays the same throughout the duration of the game. While the hero might be minimalist in design, there is still a huge emphasis on character, despite his lack of facial features. There is also amazing attention to detail in the design of the weapons, particularly the giant sword. What is truly impressive though is the design of the game world. Each level is perfectly rendered and creates a sense of a complete fantasy world.

From the moment Third Blade starts, the music immediately draws you in. While it may be a bit cheesy, the guitar ballad works. It sets the scene for the epic battles that are about to take forth as you roam across the land on your quest. A similar tone of music runs through the whole of the game. It’s not often I find on an iPhone game where the music is well done or adds much value to the game, but Third Blade seems to have done the job. I’m completely drawn into the game world and can sit there playing until I either beat the level or die before I realise any time has passed. All the sound effects fit with perfect precision and seemingly sync with the musical background to create an all-encompassing battle soundtrack. 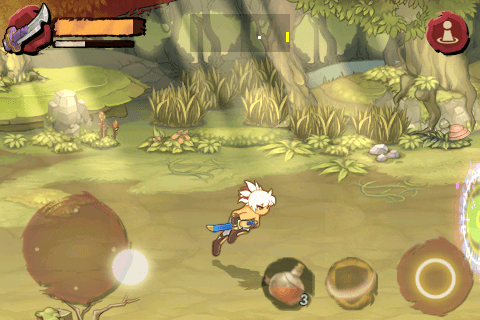 For a two-dimensional action-RPG, Com2Us’ Third Blade is a fantastic game. While the graphics might not be as advanced as some of the other RPG’s available for iOS they are still beautifully rendered and add to the game significantly. Despite the game format not being completely original, it is simple and incredibly fun to master. With the music on full blast, Third Blade can completely sweep you off your for hours of addictive gaming.