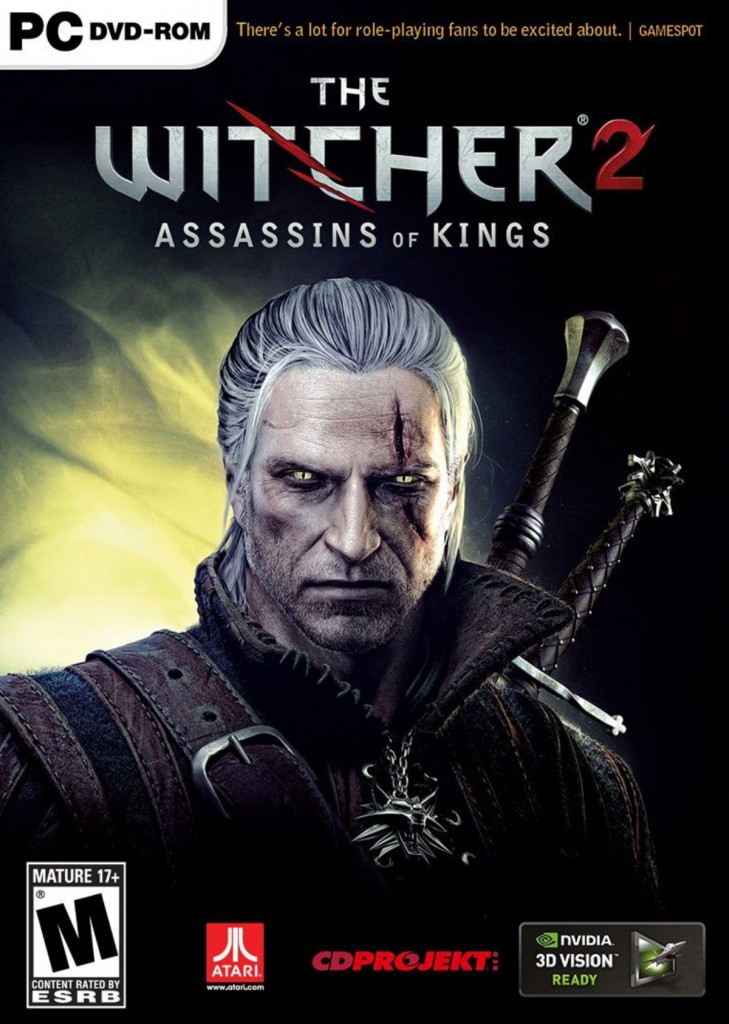 CDProjeckt, owners of GoodoldGames (re-seller of classic games via digital distribution) and creators of the The Witcher franchise, have recently released The Witcher 2 for the PC. The game itself is quite awesome and I found it to be surprisingly fresh in a market full of boring rehashes and sequels that have less features, or worse features than their predecessors. This game is a huge improvement over the original, and not only that, it is also such an awesome game that it can not only be enjoyed, but also easily jumped into (from a story perspective). This game has been nurtured really well and the matured product is something that any reasonable person would admire.

The Witcher 2 has an amazing story, that’s both realistic and fantastical in nature. It follows the travels of Geralt of Rivia as he attempts to clear his name against a nation that has accused him of murdering their king. Over the course of his travels he meets old friends, new enemies and a holy group of strange individuals each with their own personal flaws and characteristics. 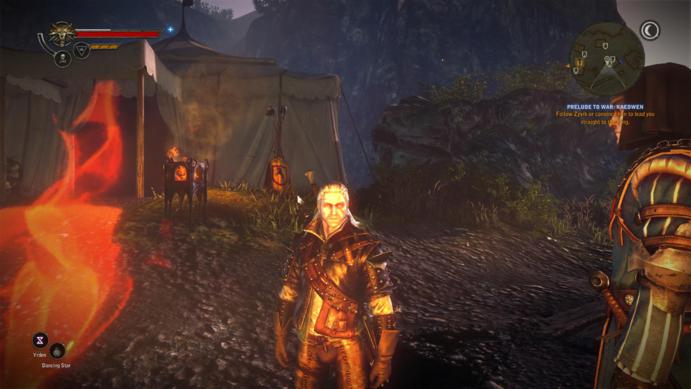 The thing that I loved about The Witcher 2’s story the most is how dark it can get at times. Like early on in the game, you’re exposed to a Mayor of a town who seems like a niceish bloke at first, but as you go through the story, you find out that he has done some nasty stuff. This game should not be played by children, at all, ever. I mean, this mayor dude kidnaps and elf woman and keeps her as a sex-slave (who eventually falls pregnant with her child) while his wife sits in the basement getting high off some form of Cocaine.

The story isn’t just dark here either, not too much later it has a king murdering a monk via smashing his face into a stone tablet, for no apparent reason. This is some really dark fantasy here, and the uniqueness of it drives you to continue playing until you’ve experienced it all and completed the story.

Graphically The Witcher 2 is a stunner. While it’s not as huge a leap as Crysis 1 was back in the day, it’s still amazingly pretty and can actually dazzle you at times. This actually happened to me during the first boss-monster fight, tentacles flinging everywhere, dodging from side to side, trapping those things; all the while the pretty graphics and filters were all doing some amazing things to what it was that I was seeing and it was just so amazingly beautiful! I mean, it is so incredibly hard to describe how amazingly pretty that battle looked, and how much more awesome it made the entire thing.

Another thing that I really enjoyed with this title graphically is how they change the post-processing filters depending on the area that you are currently in. I first noticed this in the earliest town in the game, but it didn’t immediately click mentally until towards the end of the quest lines that take place within the town and it’s surrounding areas. For instance, when you enter the town from the outside, the colours become more vivid and brighter. But, when you go outside into the swampy forest, it uses a different kind of filtering to better convey the environment. It’s one thing to use tech in this way because you can, it’s another thing to use it and use it artistically. I’m thankful that the developers have chosen to go with the latter. 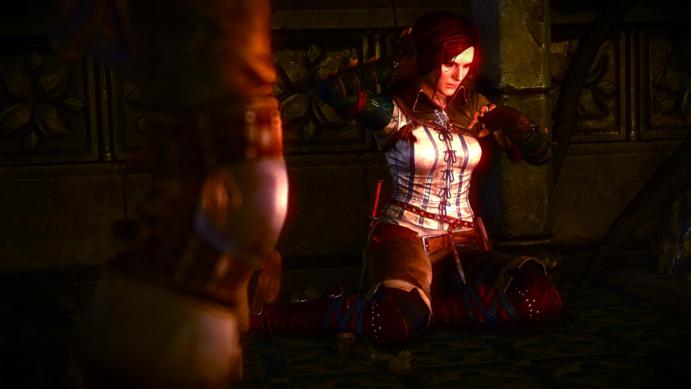 The post-processing really adds to the feel of a scene.

Not only has the team done an amazing job with the environments, but also with the character models and other various models used in the game (like weapons and crates and stuff). The title is very highly detailed in these areas. What really struck me by surprise was how much attention to detail they placed on the character models. I mean, really, I don’t think I’ve ever seen CGI boobage so well done (granted it’s not like I actively go out looking for CGI boobs to ogle during my down time or anything, but it’s the internet, so you’re bound to have come across a pair or two in your travels at some point), so props to you guys and girls that developed the game; I bet you all had an amazing time “researching” those features. 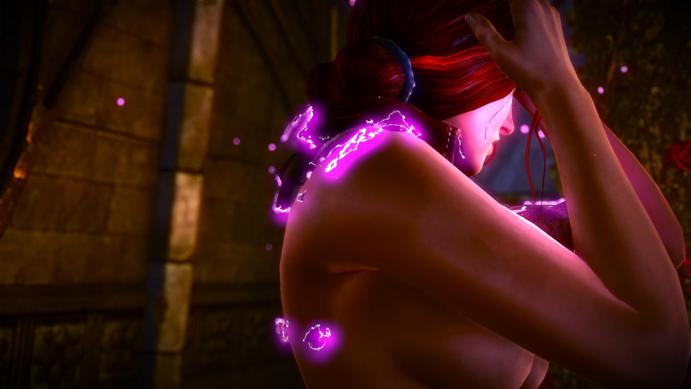 The research has really paid off! I especially like the purpley magic.

Though, there is one thing that I found a bit buggy graphically. That thing is actually quite minor, but it’s still pretty bad. It’s that, basically, sometimes when the game would take over Geralt in a cutscene his swords would occasionally not sit inside their sheathes properly, which is kind of weird. It usually fixes in a scene change or a reload or whatever, so it isn’t that big of a deal really.

As many of our more loyal readers will have noticed, I tend to rate a games soundtrack and audio based on the amount of time it takes me to switch from game audio to Windows Media Player. This game has lasted me it’s entirety so-far, so that’s a pretty good sign. This means that I have yet to switch to Windows Media Player because I’m absolutely loving this games background soundtrack and stunning audio effects. 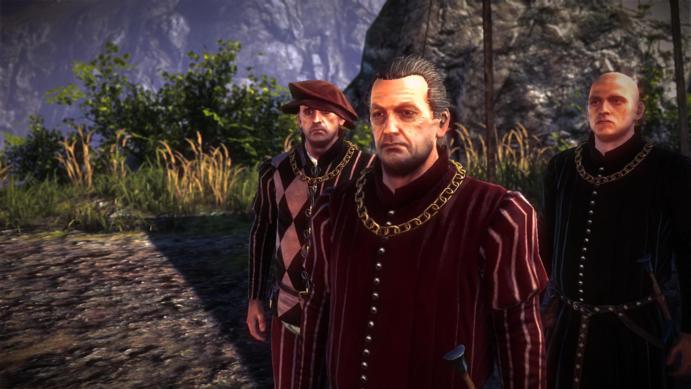 Aristocrats of some kind.

Even the voice work in this game is amazingly well done. Though, Geralt does seem to have a little bit of a Dark Knight-esque Batman speech thing going on, but I think it suits the character. On this topic, the first thing I noticed in the dialogue is how it is very cliched fantasy in its style. Though, one thing that concerned me was that the characters had differing accents some of the time. I guess, if you think about it, those characters could have been raised in other countries or whatever. Though, it’s certainly not game-breaking and most players probably won’t even notice it.

There really wasn’t any faults in the soundtrack and it has kept me amused for the large amounts of time that I have spent playing the game.

The game mechanically is basically hack-and-slash mixed with RPG elements, it really makes the game quite enjoyable. I know that there have been a few games like this released in the past, but I feel as though The Witcher 2 is probably one of the best finished projects of this type. When you add this style of gameplay to a mouse and keyboard setup it can take a little while to get used to, but, if anyone here has played the PC port of Fable: The Lost Chapters, you will probably be able to relate to the control scheme quite easily.

The game itself has various elements to it, elements including: the main storyline, side-quests, brothels, companion lovin’ and boss fights. So for now, I’ll talk about how the main story integrates itself into the gameplay.

The storyline itself seems (at first glance) like your typical fantasy RPG type of thing. Kings, wars, swordfights, wizards, that kind of thing. Gameplay wise, the story is told mostly through Geralts interactions with other characters and can be influenced by the players choices in dealing with these characters. The story is also told through combat and adventuring, as players will be required to pass certain points in the game in order to advance, like participating in a certain storyline quest and the like. 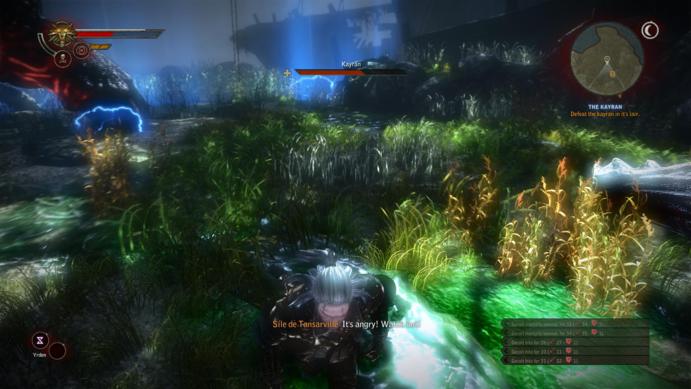 Side quests are much like the side quests in other games from this genre. They take place in the same area that your character is currently in and can optionally be completed for additional experience and rewards. The side-quests seem to be more of the same old “go here, kill x” type of missions, but it’s done really well and you don’t really notice it too much. They’re also usually pretty short but some of them can be a little logic defying at times. Like this one sidequest early on where you have to bomb these tunnels that some monsters use to travel around through. The idea is to plant an explosive in the holes, but you can’t just use any bombs, no, you have to use the correct bomb, even if you have one with very similar effects (or more deadly) effects.

Brothels are present within the game and make for an interesting diversion from the adventuring and killing aspects of the game. Usually you bribe a prostitute and this makes them more venerable to penetration. The whole deed is pretty much an in-engine cutscene with no input from the player. You will also find that the prostitutes aren’t very accepting of small bribes, so if you want to “get some” you’ll have to fork over the big bucks. Worth it? That’s up to you to decide. Companion lovin’ is quite similar to the prostitution present in brothels, only its freer. The downside is that they’re only available at certain points in the game if you push the dialogue in that direction. 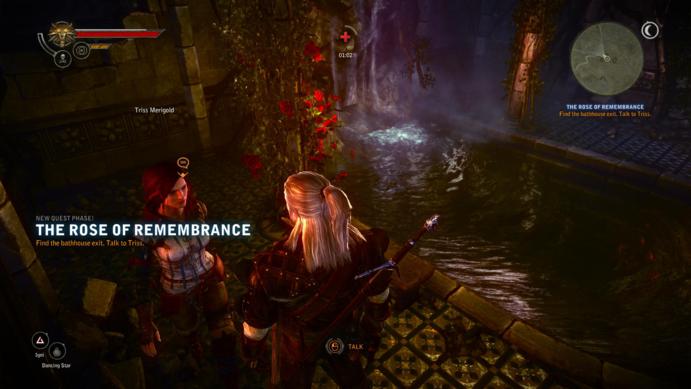 Now the main thing that I really love about this game is the Boss Fights! Not enough games have them these days, and even fewer of them are actually challenging. Fighting Big-ass monsters is a staple in gaming, and it’s a staple that I do not want to see removed for “realism”, or because the player testers couldn’t beat a certain enemy, so the developers gimped it to make it easier on them. As long as there is a clear winnable pattern (like in this game) then so what if it’s too hard? That’s what makes boss fights, well, boss fights. The challenge, the one last difficult thing that stands between you and the next point. That feeling of elation and awesomeness when you finally beat that thing. So much love from me there.

I could really go on all day about how great the gameplay in this game is! But then this review would never get done. Be sure to check the embedded video for a better look at the combat.

The Witcher 2 is the penultimate hack and slash RPG so far. While it’s certainly not for everyone (especially children, as it has very strong sexual, violent and drug related stuff within) it is certainly a game that must be played by as many people as possible. If any of you have played The Witcher, this game is barely recognisable from that, sure some of the characters look similar, but this game is like a 10,000-up on it’s prequel. If you love RPG’s, if you love hack-and-slash, if you love Dragon Age or Mass Effect… man, really, if you love video games at all; you will buy this game as soon as you get a chance to.