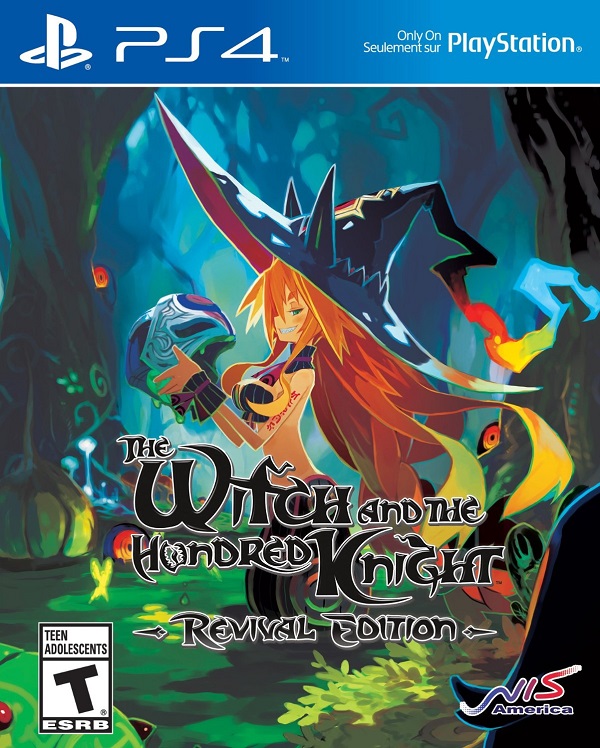 Overview
A couple of years ago Nippon Ichi Software tried something a little bit different by developing and releasing The Witch and the Hundred Knight which was quickly localized and released in the West. While the original left many fans wanting, the company wasn’t about to let the title fall by the wayside and have returned with a re-done PlayStation 4 release of the game, The Witch and the Hundred Knight: Revival Edition. Is this upgraded version of the original game worth your time?

Story
The Swamp Witch Metallia has been unable to grow the borders of her swamp for an incredibly long time to the point that she has been held in check by the Forest Witch Malia. Finally pushed to her limit, Metallia chooses to summon the powerful champion, The Hundred Knight in order to push back against any force of good and transform the entire world into a swamp that she can rule over. 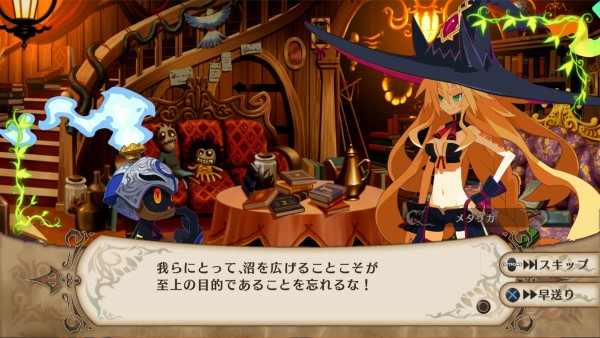 Hundred Knight is as malleable of a creature as they come since it cannot speak nor really question any orders it is given and thanks to being incredibly powerful he is a force to be reckoned with and unfortunately for everyone else, his master Metallia is as evil as they come. Throughout the course of the storyline players, as the Hundred Knight, will encounter a number of different characters but unfortunately there really isn’t a whole lot of detail spent explaining much of the world or delving into these characters other than to occasionally display Metallia’s evil demeanor and try to get players to see what motivates her. 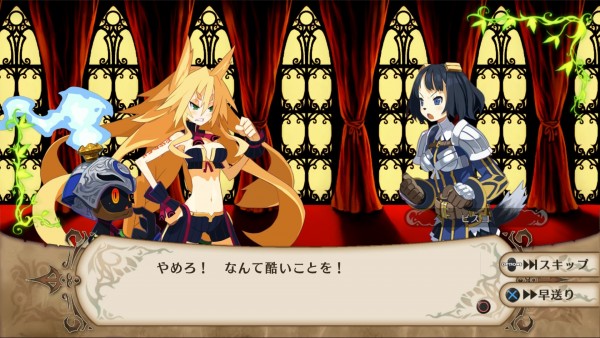 One of the first acts she performs helps set herself apart from a standard cartoonish villain and sets herself up as a disturbing villain which is a bit unique considering how most NIS games like to portray themselves. It is worth noting that outside of the new Tower of Illusion, players shouldn’t expect too much revision to the game’s storyline here so don’t expect anything fresh in that regard for The Witch and the Hundred Knight: Revival Edition even if you go through a few times for the multiple endings.

Gameplay
Similar to the story elements, the gameplay elements of The Witch and the Hundred Knight: Revival Edition have also remained the same with some additions to help pad the game out a bit and make things easier. Players spend the game controlling The Hundred Knight as he set sout into the field and takes on opponents in an action RPG styled game that sees him conquer opponents using a stylized multi-weapon combat system. 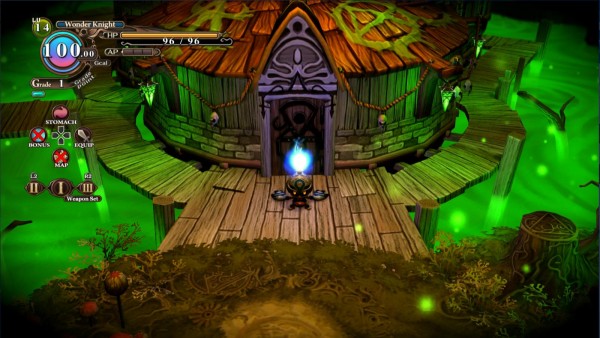 The Hundred Knight brings five weapon types with him into combat and can swap between them in mid-combo to try and unleash as many attacks as possible while also targeting an enemy’s potential weakness considering certain foes can be incredibly resilient to certain weapon types but desperately weak to others. This means that swapping from a magic staff to a hammer, spear, sword, or pike often allows for a flurry of devastating attacks that can annihilate groups of opponents if set up properly. This is done by setting up your combo strings and weaponry in the menu prior to a fight of course and then simply attacking away at the foes as the weapons are swapped in order.

It may take a bit of time to understand how certain weapon combo strings work together, since improper combos can be rather slow and leave the Knight open to counter attacks but once you learn how to properly set up your weapon combos then things will be much easier as your attacks will flow faster. In fact, players can even set up three different weapon combo stacks at a time, swapping between them with the L2 and R2 buttons to best fit whatever opponents your facing off against. 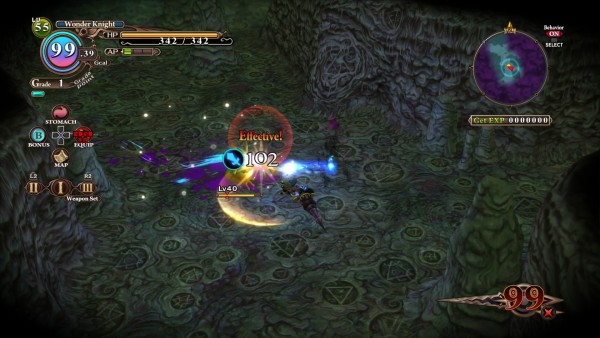 There are also various Facets that the Hundred Knight can use which change the attributes of your fighter to boost various stats and even Tochkas that serve as support units to help provide the player with plenty of options in combat. This is something that is essential thanks to the punishment that death brings and an ever-persistent Giga Calorie counter.

These Gigacals start at 100 and continually tick away for every action the player takes out in a field. This means fighting enemies, recovering health, attacking buildings, and everything else uses these Gigacals and while it is possible to consume opponents to restore some points, doing so at the wrong time leaves you open for attack. That being said, there is some risk and reward here as the longer the Hundred Knight is out in the field the more rewards the player will likely stumble across and the stronger the Hundred Knight will become, as any time he returns to Metallia’s home to rest and eat, these bonuses will vanish. 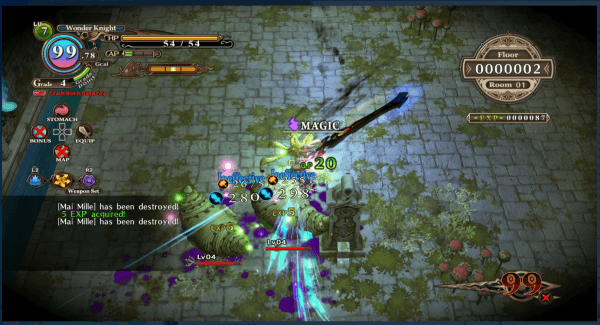 This doesn’t become too much of an issue however thanks to the Tower of Illusion that unlocks a little bit into the game. This is the entirely new area that allows players to sacrifice a weapon to unlock a set of levels to battle through with the difficulty set to the level of the weapon sacrificed. The tower serves as a useful tool to help test out what your Knight’s current equipment is capable of handling against numerous enemies but it also serves as a way to easily overpower yourself as the Tower of Illusion generally rewards the player with high powered equipment as well as experience that can make formerly challenging enemies a cakewalk.

The Tower of Illusion also allows players to take Metallia, though not your Metallia, into battle at times as Metallia can be summoned to the battlefield once filling up a meter. She has quite a few powerful attacks and it is nice to see her actually fighting for once, something that I hope is continued in the planned sequel, but ultimately doesn’t offer too much variety since most of your time will be spent in the Tower either gaining gear and catalysts to enhance that gear or simply leveling up.

Visuals & Audio
One thing that is a decent upgrade for The Witch and the Hundred Knight: Revival Edition over the original PlayStation 3 version is that the graphics this time around are far crisper than they were originally. The original title featured areas that made it incredibly difficult to follow the action especially in areas that featured overgrowth that would often obscure the action and with everything being improved a bit, keeping track of the diminutive Hundred Knight and all of the enemies is much easier this time around. 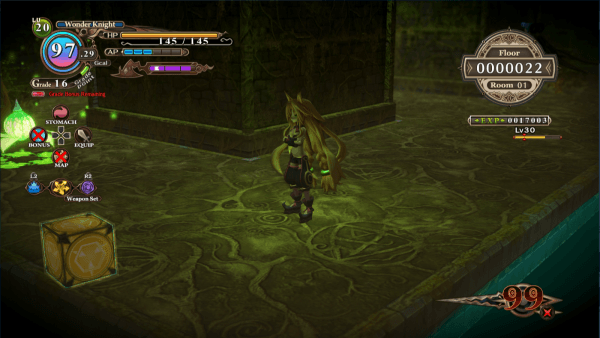 As for the rest of the graphics, there doesn’t appear to be any noticeable difference in the character portraits and the like other than appearing a bit more colorful. The voicework found in this title is very similar to what was found in the first game and there is a nice mixture of background music to keep things feeling fresh throughout the title.

Overall
The Witch and the Hundred Knight: Revival Edition is a satisfying upgrade to the original PlayStation 3 release that offers a bit of extra content and cleaned up visuals but those who are have played the original won’t find much in the way of new content here. The combat system remains enjoyable and thanks to the Tower of Illusion allowing players to grow stronger without grinding older areas the pace of the game flows much better than before.

These types of adjustments have made the Revival Edition a decent upgrade to the original game, though there are still plenty of nagging issues from the original, and if you haven’t picked up the original version, you’ll find that The Witch and the Hundred Knight: Revival Edition offers a different style of narrative than what one would usually find paired up with an enjoyable, albeit somewhat repetitive, combat system.
Capsule Computers review guidelines can be found here.