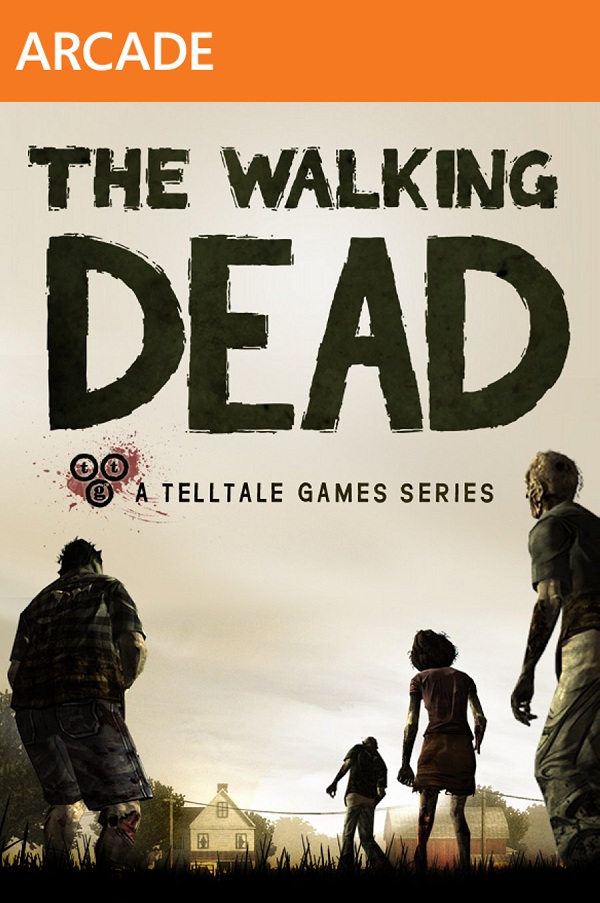 Overview:
For a long time now zombies have held a special place in the entertainment industry’s hearts. There have been countless movies, books, comics and video games all created featuring a zombie apocalypse of some kind or another. However in 2003 a man named Robert Kirkman began a zombie story unlike any other in the form of The Walking Dead comic book series.

This highly successful series has been running continuously since its creation and has since received a widely popular television adaptation of the story and now Telltale Games has created their own contribution to The Walking Dead series in the form of a five episode game which will be released over the next few months. Now that the first episode of The Walking Dead Videogame, A New Day, has been released will it deliver what fans of the franchise are expecting?

Story:
Interestingly enough, rather than retread old ground already told in the comics and television series, Telltale’s The Walking Dead follows the story of a different lead character and various survivors which he comes across in his journey to survive the zombie apocalypse, though it is worth noting that this story does take place only slightly before the start of the comic books so many Easter Eggs referencing the show/comics are placed throughout the game. In The Walking Dead the game we are in control of a man named Lee Everrett, a convicted felon who is currently locked in the back of a police car being transported to prison. 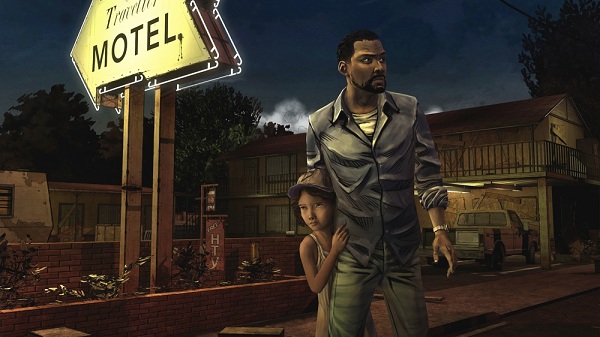 Through the use of the game’s simple conversation tree choices players can either choose silence or speak with the police officer and find out a little bit more about why Lee is being taken to jail. However while Lee and the police officer are talking things turn from bad to worse when the police officer ends up hitting somebody… or something… walking in the road and crashing into the forest nearby. Lee awakes to find that, despite a sizable scratch on the leg, he is doing alright although the same cannot be said for the cop who happens to have come down with a case of zombieism which must be dealt with in a rather brutal fashion.

After nearly dying twice in a matter of gameplay minutes, Lee finds himself in a suburban neighborhood where he finds a young girl named Clementine who has managed to survive on her own despite the zombie apocalypse occurring all around her. Lee takes it upon himself to be responsible for the young Clementine and try to keep both her and himself alive in a world where the undead roam the Earth. 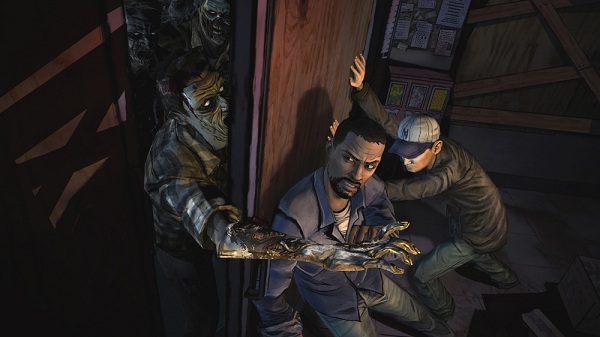 The story of The Walking Dead is quite an intricate one and the relationships you develop with other survivors will have an impact on how the game’s storyline will play out. The game itself will let you know whenever a specific word choice or action has affected another survivor’s opinion of you. In fact, the characters around you will remember how you have acted throughout the game, meaning that they’ll know whether you are trustworthy, a liar or something else entirely.

Lee is caught in the middle of a number of dicey situations where the player must try to defuse the situation, even if it means making enemies in the process. The interesting thing with this is, those decisions can and will come back to haunt you in further episodes and even in this very episode repercussions can be felt. Even in the preview for the next episode it is easy to tell where certain decisions will drastically alter how future episodes may play out. This creates a massive amount of replayability as players will be eager to play through Episode 1 at least twice in an effort to see how things change depending on their choices. Thankfully these various playthroughs can then be transferred over to future episodes as well as the game offers three separate save slots for those who want to experience every facet of what Telltale’s Walking Dead has to offer.

Visuals & Audio:
Interestingly enough the cel-shaded visual style chosen by Telltale Games is not only visually impressive but also truer to the type of artwork that fans of the comic book series are used to. As such, the characters themselves look great and the environments have a foreboding feel to them. The zombies themselves are scary looking though not hyper-realistically so so don’t expect too much heavy gore. 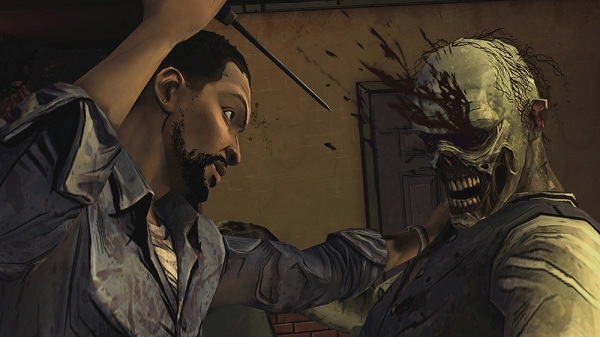 While there isn’t a lot of gore, there is plenty of violence to be had as every zombie kill is scripted which offers an extremely violent and visceral experience. There are a number of great examples of gruesome zombie killing to be had, especially one featuring a hammer. The sound effects themselves are handled well, especially with the aforementioned hammer use and other weapons used by the survivors. The zombies sound well… like zombies and the characters have adequate voice actors which deliver a believable performance.

Gameplay:
The Walking Dead’s gameplay is split between simple exploration around safe areas, speaking with survivors, finding items and solving a few small puzzles and moments of desperate action where one false step could mean death.  In exploration areas players will be able to easily move Lee around the area and use the right stick to highlight various objects or people and interact with them. The game makes finding these objects easy by offering visual tips for where interactive objects are at, though these can be disabled for those who want a little bit of a challenge. 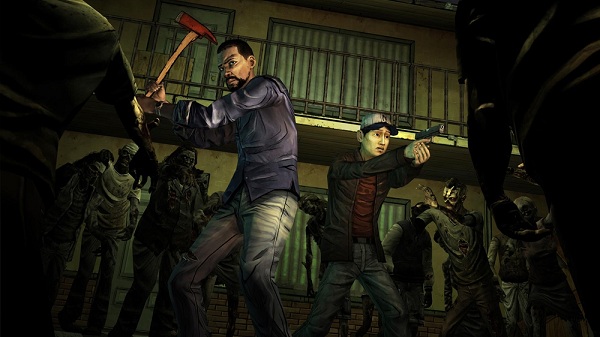 None of the puzzles in the game itself are overly challenging, with one involving “fixing” a battery operated radio seeming entirely out of place given the fact that the person you are helping actually works at a radio broadcast station. However besides that one there is an intricate series of actions which are made later in the episode which meld the intricacy of a puzzle with the life-threatening danger of the zombies nearby.

Whenever things get bad however, there are a number of action sequences that appear throughout this first episode. In these action sequences players will usually have to deal with simple quick time events and make life-changing (sometimes life ending) choices. These action sequences almost always have a desperate air about them which is quite thrilling to experience as every encounter feels completely feasible as the ragtag band of survivors tries to survive against the undead.

As mentioned before, the game’s dialogue choice system plays a heavy role in the game as you speak to the other survivors and make decisions on what to do. There are a number of things that players can choose to reveal or hold back from fellow survivors as they try to find an even balance between where the truth should stop and the lies begin. As such players can choose to make Lee a man who tries to be honest when he can and help others, a bit of a jerk who values his life over any other or even a standoffish outsider who is only taking care of Clementine out of sympathy. This can create plenty of tricky situations as you try to keep your friends happy whenever a dangerous situation rears its head or anger erupts amongst the survivors. 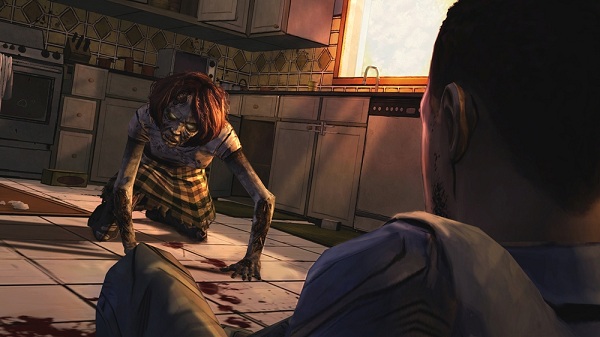 This creates something interesting where players will find themselves truly feeling for certain characters, especially Lee himself. Nearly every character you speak with is humanized in one way or another and this makes choosing whom to side with all the more difficult, making the option for multiple playthroughs all the better.

Overall:
The Walking Dead: A New Day is by no means a very difficult game nor even a very long adventure either, considering it is the first episode in a set of five. However the emotional connection and desperation that players will feel as they follow Lee’s journey in this zombie filled world will keep them enthralled and eager to see more. With the amount of characters that are introduced, drama and shocking situations Telltale has managed to place in just one episode and only a few performance problems along the way, players will certainly be eager to see what will be presented when Episode Two rolls around.