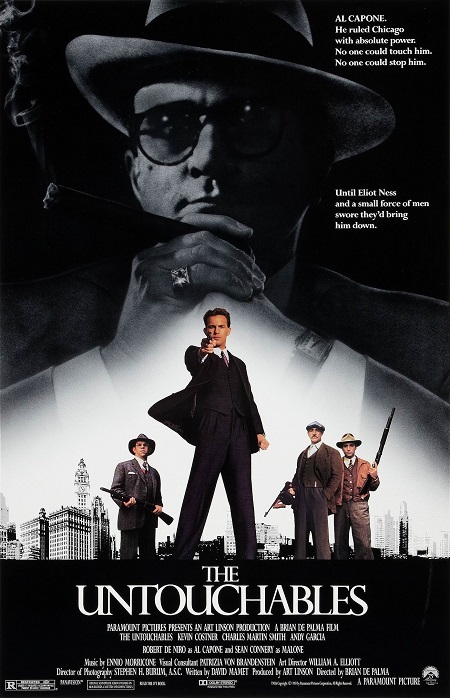 There is probably no prohibition era gangster more famed in popular culture than the ostentatious Al Capone. He was the crime kingpin who organised the infamous Saint Valentine’s Day Massacre where he had all of his rivals killed off in broad daylight. Although Capone was flying high and mighty during his heyday in the roaring 20s and 30s, he was ultimately brought low by the American Internal Revenue service for not paying taxes on his (illegal) income. The man who is most often associated with bringing Capone in was special prohibition agent Elliot Ness who wrote a book about his exploits titled The Untouchables. Although it was ultimately the tax man who brought Capone down, the exploits of Ness and his team of law enforcement agents still make for some interesting stories. I put on my best suit and spats and I moseyed on down to George St cinemas to watch the In the House screening of The Untouchables. 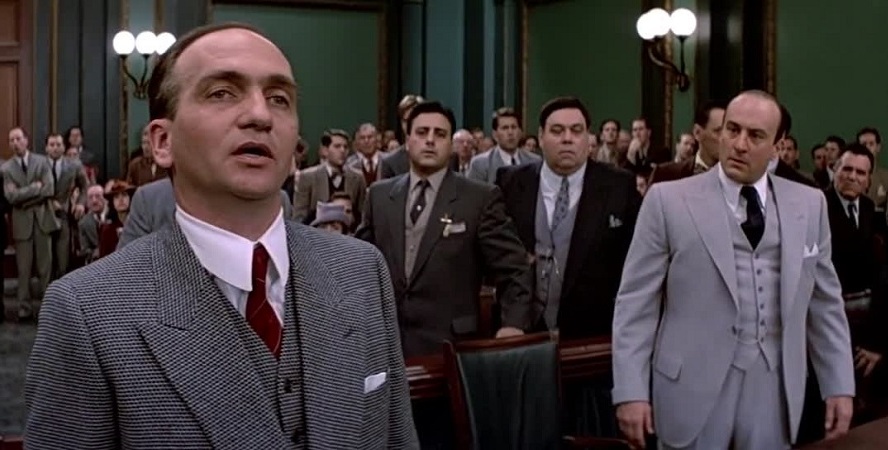 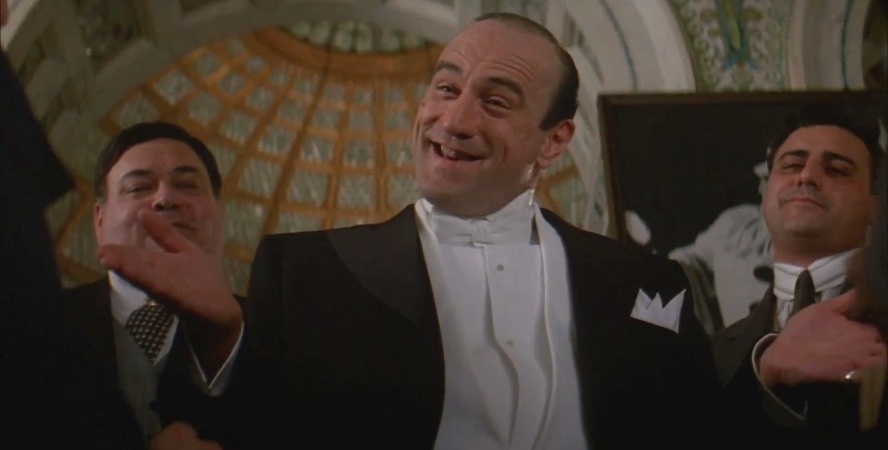 The narrative is set in prohibition era America and follows the exploits of Elliot Ness (Kevin Costner), a government prohibition agent, trying to bring the crime lord of Chicago, Al Capone (Robert De Niro), to justice. His first hurdle in attacking the criminal empire of Capone is that the city is so corrupt that even the police are in Capone’s pocket. Through chance he comes across a streetwise beat cop, Jimmy Malone (Sean Connery), who agrees to help Ness take down Capone only if he’s willing to pull out all the stops to catch him. They set up a team of cops they know aren’t susceptible to bribery, the eponymous ‘untouchables’, and take to the task of finally bringing down Capone. We see the lengths these men will go to finally bring justice to Chicago as the peril they encounter increases with every step closer they get to their quarry.

Kevin Costner isn’t particularly interesting in his portrayal of Elliot Ness just because it’s so blandly wholesome. Ostensibly his character arc throughout the film sees him go from a righteous and honourable man who follows the letter of the law to one who pursues justice irrespective of the cost. The film makes overt reference to this but the narrative never actually lets him make any decisions which show us this change beyond the one at the climax of the film. Perhaps this is an aspect of the film showing its age and the protagonists of contemporary films and television have spoiled me with moral complexity. Nonetheless, Costener was only really able to do one note as Ness and, unfortunately, it wasn’t a particularly interesting one. 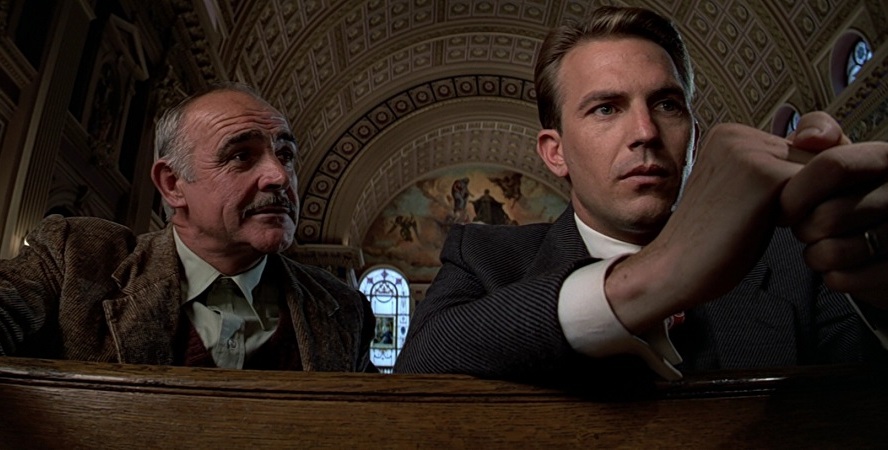 On the other hand, Connery does an alright turn as the jaded and world-weary cop to Costner’s idealist. His character has a wonderful complexity to it compared to the straight man Ness but that doesn’t really seem to be too tall an order in this film. My personal favourite in this film is Robert De Niro as Al Capone. Every moment he’s on the screen, he pretty much steals the limelight as he blusters through his lines with a bravado befitting a king of the underworld. It was fun to watch him be a villain who enjoyed being villainous and I have no doubt that the character would have been a fun one to play.

One thing I was impressed with, in regards to the film’s script, is its ability to build and maintain a sense of suspense even though we ultimately know the film’s narrative. It is a foregone conclusion that Ness will get his man because that’s simply the way the history unfolded. What is uncertain, however, is the fate of the ancillary characters around Ness and that’s where the film builds its tension by putting these characters in the line of fire. They aren’t protected by the shield of history and so are able to die at the capricious will of the film’s narrative. 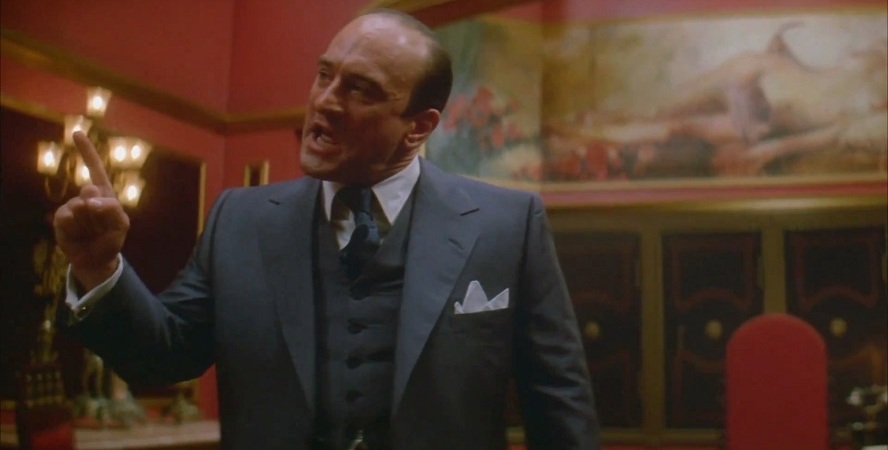 The visual direction is par excellence with director, Brian De Palma, creating beautiful cinematography as the way he frames his shots gives you beautiful imagery even with some pretty macabre stuff. During one of the film’s infamous scenes where Al Capone beats a man to death with a baseball bat (which apparently is true to the history), as the camera pans out over the macabre scene we’re shown the amazing contrast between the tuxedo mobsters around the table and the bloody mess in the corner of the shot. It’s a haunting analogy for the bootleg empire which Capone runs which has a veneer of class mixed with casual brutality. I only wish that some of this nuanced visual imagery was given to Costner as Ness…

The film’s is soundtrack is expertly composed and does a good turn at punctuating the film’s emotional arcs. The main theme especially, composed by Ennio Morricone, plays with sweeping orchestrals to give a sense of grandiosity to the action. There are smaller more intimate tracks for the many suspenseful moments which are more intimate and nerve-wracking. It’s a strong score but unless you are a hardcore fan of the film, I doubt you’d be able to point it out outside of the couple of hours of runtime this film has. 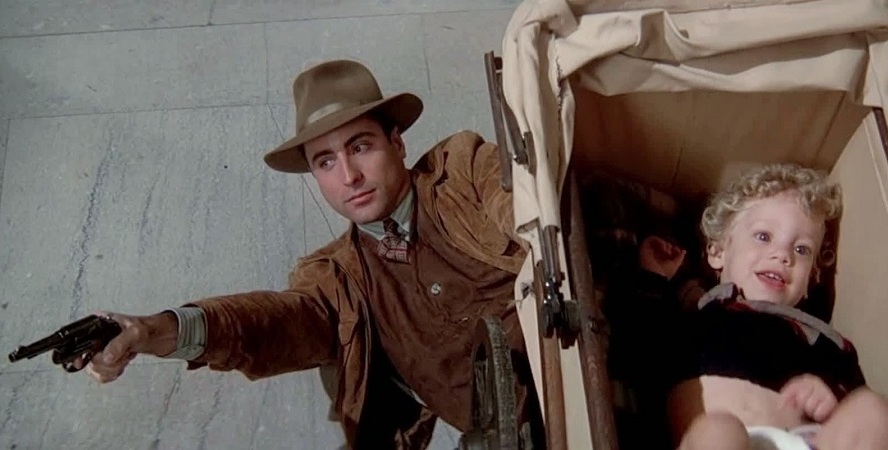 Overall, I enjoyed this film and had a good time while watching it. Costner does a fairly bland Ness but Connery and De Niro really make the picture a cut above. The direction features some beautiful cinematography and helps to make this film stand out as something more than a run-of-the-mill gangster movie. The film’s orchestral soundtrack does a fairly good job of reinforcing the story but ultimately didn’t make too much of an impression on me. I wouldn’t this film to be a cult classic, but I can see why some people would and I don’t regret watching it.

The Untouchables is a pretty good gangster film which features a strong supporting cast and wonderful visual direction.
8