The Sims has always achieved a high amount of success over the years, ever since that first PC game. Each title is a sure fire hit (except maybe the furniture packs, but even then), so EA’s choice to let the latest release go for the low, low price of nothing at all is a surprising one. So is there a reason that they’ve let this one slip through free, or are they just being generous?

To start with, Sims Freeplay looks and feels like a normal Sims game, but it really isn’t. The biggest difference is the fact that it all happens in real time. No more lining up a bunch of actions and fast forwarding through them like normal. In fact, once you start on an action you better like what they’re doing because you may have to wait another ten minutes for them to finish. I don’t think I’d ever realised how long a minute was until I had to wait for one of my Sims to finish a social action. 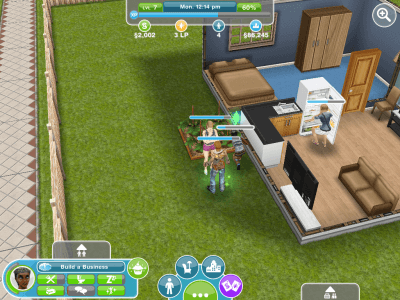 The other big change is that instead of taking care of a family, you take care of a whole town. While this may sound intimidating, it’s actually not that bad, mostly because of the fact that everything is done in real time. At first getting used to the controls and switching between people and houses was bewildering, especially because it is just so different from other Sims games. Once you play it for a little while it becomes natural, and you forget there was ever another way of doing things. 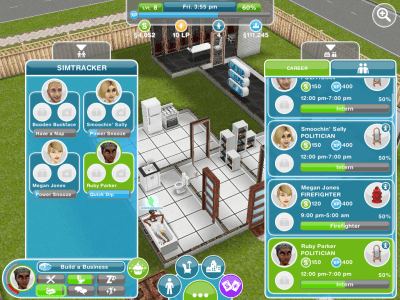 However, there are ways around waiting for things to finish being done. You can spend life points (which are earned by completing wishes, as per usual) instead of your time, with the amount needed changing with the amount of time you’re saving. The life point cost doesn’t change if you’ve already completed half the task though, so if you’re going to bludge off something it’s best to decide so quickly. 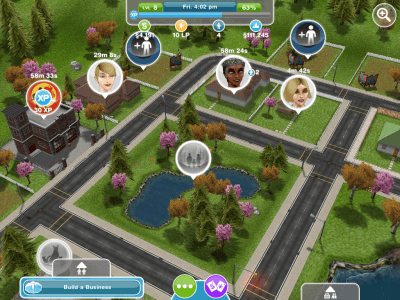 You do have the choice of buying life points or Simoleons through as an in-app purchase, of course, which is Farmville-esque. So it’s up to you if you are willing to pay money to speed the game up, although that sort of defeats the point of this installment. For those who are having trouble adjusting to this way of playing it is an option.

Your game is measured by how much your town is worth, not really by how much money you have in the bank. While having money is useful because it means you can buy more buildings to raise your town worth, you can be basically broke and still have a decent net worth. Which I learned on a few occasions. 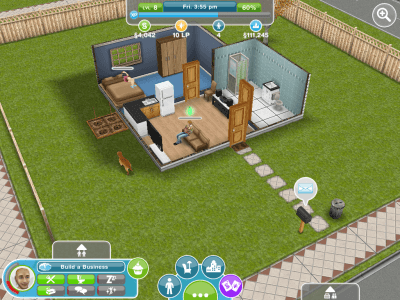 Something else I discovered was that your Sims don’t really die if they don’t eat, sleep, go to the bathroom, shower, and so on. Shortly after discovering this I took on a different form of saving money by one of my Sims only owning a toilet and a garden to earn some money. Not cruel at all.

I also had a full community feel by having most of the neighbourhood hanging at one of the houses, socializing and eating and whatnot. The way that the new app is designed means that it’s a lot easier for that to happen, with having full control of each of the neighbours and stopping them from staying over too long, or deciding they couldn’t be bothered to come over. 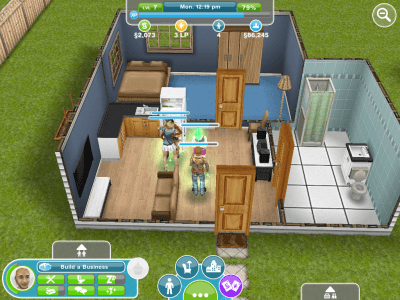 The careers part of the game is similar to what has happened in the past, with the exception that you have to actually build the work environments. As you go on in the game, get more Sims, and have them climb the work ladder, you will have more money and it will become fairly easy for you to pick them up as you go.

Instead of being a game that you can spend hours playing, it takes over your life far more subtly. In a way it’s like Farmville, you end up timing it and keeping an eye on the clock so you do certain things with your Sims after they finish their actions, or make sure to send them to work, or whatever else.

As with the standard of Sims games that have already been released onto the market, the visuals are top notch and respond well to interactivity. Even though this app is far cheaper than it’s cousins, you won’t notice a difference in the performance of the app, and certainly not in the graphics.

Once again, you won’t find a huge deviation from the norm. Everything about the soundtrack screams the Sims, but that isn’t a bad thing in the least. I mean, I have a whole range of memories and nostalgia tied to that soundtrack, so I love the fact that it’s stayed pretty similar.

Considering the fact that the app is free, offers updates, and hasn’t at all skimped on the features and in fact offers something vastly different from what we’ve seen in Sims installments in the past. This is a definite must get, and not just for Sims fans.