The Misadventures of P.B. WinterBottom

Story:
P.B. Winterbottom is an odd little man. His love for pies is quite out of hand. So much so that he does not care who or what gets in his way. Winterbottom is a notorious pie thief who has caused countless acts of destruction in his search to eat every pie known to man. No one is safe from his hunger.

That is until a mysterious crowned pie, which flies around on its own, leads Winterbottom into the journey of his life. When attempted to obtain this mysterious pie, Winterbottom is sucked into a time paradox, giving him the ability to make clones of himself and obtain even more pies. However the pie itself has tricked Winterbottom, for with his own love of pie, he is re-writing the past destruction he has caused.

The story is at first quite confusing. At the beginning you believe that Winterbottom is only after the pies, and in truth that is his main goal. However the main part of the story is shown in the background as you see what your current actions are doing to the world around you. Such as in the main world, Winterbottom had set fire to a warehouse to obtain a pie. Then the first paradox you create to retrieve a pie causes Winterbottom’s other self to smash into a water tower, extinguishing said fire. The truth of the story is that to obtain the mysterious crowned pie, Winterbottom must fix his past wrongs. 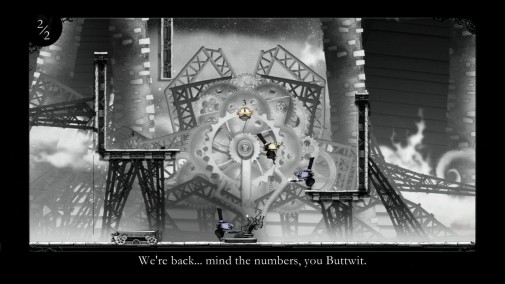 Graphics & Audio:
The game has the appearance of a silent movie and feels exactly like one. It makes a nice charming feel, even though it is played directly in a black and white style, with there being only a few other colors included. The game has a definite finished feel to each area and to tell the truth is a little bit creepy in appearance. Everything is drawn in a noir style and with the black and white color provides an eerie sense for most of the levels.

That being said, the levels are gorgeous and the backdrops and design for each of them are intriguing to say the least and definitely lend a hand to the deep love of pies that P.B. Winterbottom has, as some of the challenge levels are pie themed entirely.

There is no direct dialogue spoken in the game, instead it is all told through rhyming. The background music is a bit on the relaxing side, but coupled with the eerie backgrounds can definitely provide a small feel of creepiness. The music is old fashioned and even the recording sounds like an old-style recording device. 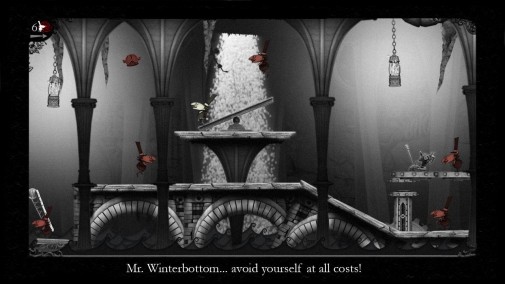 Gameplay:
Each level in P.B. Winterbottom has a certain amount of pies which must be collected. All the pies must be collected before the level will end and allow advancement in the storyline. Not only that but the further advanced you are, the harder the pies are to retrieve.

In the beginning all you must do is reach the pie normally and consume it. However the gameplay changes as the levels get tougher. Pies must sometimes be obtained in a certain order, and breaking this order can cause a level failure. Other levels have pies that can only be eaten by your clones. To top that off, there is even a level where your clones are deadly to yourself.

To obtain these ever so delicious pies Winterbottom has the ability to create paradox clones, which are literally copies of his own actions. With the press of a button you may record the actions performed by the player and when the button is released the clone is created. The clone will then perform the same actions in a constant loop. There is a limited amount of clones that you can use per level at any given time, and the loss of a clone due to being unable to cancel the clones can cause a level failure at times. 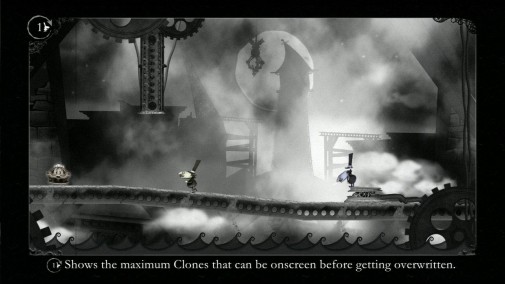 There are plenty of levels to enjoy, and the game can stretch to last at least four hours to even the best puzzle gamer, but will definitely last longer for everyone else due to some extremely challenging levels. There are a bunch of moments where you will be banging your head on the keyboard in frustration, and then five minutes later smacking yourself for not realizing how to easily reach a difficult pie.

The only problem is that due to the platforming, a simple misplaced jump or movement can cause all the preparation to mean nothing as you have to start over again. Not only this but the difficulty sometimes jumps extremely from one level to the next. This is understandable for a puzzle game but still is frustrating when there is a level you simply cannot pass. Though this is then coupled with the great satisfaction of being able to pass this difficult level once you are able to do so.

Overall:
To put it simply P.B. Winterbottom is definitely a one of a kind game. The story alone is enough to set it apart from your standard game. Put that together with the graphics and the gameplay and this is a game that is hard to pass up. It only suffers from an erratic difficulty level and a somewhat short length. However to make up for this shorter length, bonus levels are obtainable, so it is not too much of an issue.  Also the PC version on Steam runs at $4.99 while the XBLA version runs 800 MSP, which is $10.  So ironically if you can, you would save $5 by purchasing the PC version over the XBLA version of Winterbottom.

I give P.B. Winterbottom