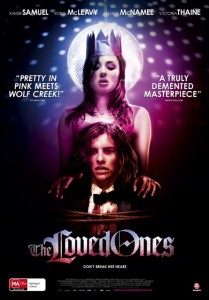 That unfortunate qualifier is often used when people discuss Australian films. Sadly, even true blue Aussies seem to look down on Australian films simply because of the stigma attached to them, and even worse, the view is often justified.

The Loved Ones is in no sense a bad film; in fact, as far as Aussie films go, (See? Now I’m qualifying it) it’s pretty good. But it does seem to falter in the same areas that many Aussie films do. But please, leave your prejudices at the door, and give it a chance. 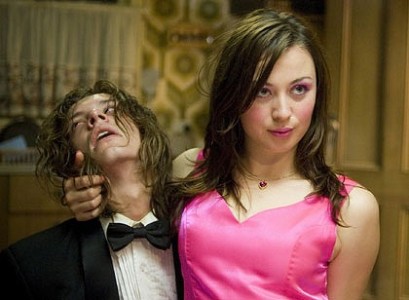 The story of The Loved Ones is comparable to that of Wolf Creek, or the increasingly awful, increasingly unnecessary Saw series. Thankfully, it’s more subdued than the thirteen-odd hour torturefest that constitutes the seven Saw movies, and much more character driven.

The Loved Ones follows Brent Mitchell (played by Xavier Samuel), a fairly successful high school student, who is asked by Lola (Robin McLeavy), the quiet girl at school, to accompany her to the upcoming school formal. He politely declines, on the reasonable grounds that he is already going with his girlfriend Holly.

As Brent prepares for the dance, he is ambushed and drugged, and wakes to find himself tied to a chair, dressed in a suit, attending a very different dance hosted by Lola. At her mercy, she will make him fulfil her fantasy prom night, whatever it takes.

The story progresses nicely, avoiding the potential genre pitfall of becoming nothing more than a series of inventive torture methods (I’m looking at you, Hostel). Brent’s helplessness is conveyed effectively; one advantage of being categorised as torture-horror is that the genre doesn’t necessarily require a happy ending. As such, we are never sure during the build up if Brent will survive or not, creating a deepening sense of dread.

The film also never glorifies the violence as others are known to do. Most of the torture happens out of sight, only hinted at or shown briefly, which serves to heighten its impact while drawing attention to the characters.

The film is plagued by the occasional clunky line of dialogue, and it’s difficult to tell if the writing or the delivery is at fault. There also seems to be some “padding”, with events that have little or no connection to the main story being given a large portion of airtime. The opening sequence shows Brent learning to drive, and an accident sees him total the car and kill his father. The story picks up six months later, and besides making Brent a brooding emo teen, the tragedy has little influence over the plot. The scenes depicting Brent’s unexplained cliff-climbing behaviour before the dance, and his friend’s date the same night, feel irrelevant.

Towards the end, the plot begins to hint at the supernatural, and although it isn’t a serious offence, it does somewhat break the believability of the story, which until that point was effective because of its plausibility.

Despite its flaws, the story is emotionally engaging as a whole, relying on well-drawn characters rather than copious amounts of gore. 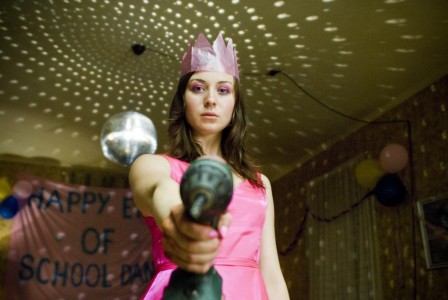 The true star of the show is Lola, lonely, unhinged and more than a little psychotic. Her character is given the richest personality, and more is revealed about her during the course of the film than any other character. Her reasoning for the kidnapping and torture become clear, and despite the terrible things she does, you can’t help but feel a little sympathy for her.

Her father is also an interesting character, and while not much is expressly told about him, his actions hint at a history, for him and his daughter, that we can only speculate on. It becomes clear that the father/daughter relationship is just as disturbing as the scenes of torture.

Comparatively, the protagonist Brent is fairly underdeveloped. Beyond a belief that he truly doesn’t deserve what happens to him, it’s difficult to identify strongly with him and as a result, much of the impact may be lost. He never has a lot to say, so we never feel very close to him. After his father’s death, he becomes a quiet, brooding young man, and soon after being kidnapped, his vocal chords are deliberately damaged to prevent him from screaming. Unfortunately, this also prevents him from developing as a character, and his changes through the film are strictly physical, the results of torture.

With that in mind, kudos must be given to the actor Xavier Samuel for managing to communicate a range of emotions with various screams and grunts.

Normally, I’m not one to pay particular attention to the soundtrack of a film, but that of The Loved Ones stands out. The song choice contributes much towards the audience’s understanding and enjoyment of the film.

During Brent’s driving lesson at the beginning, his father plays the Little River Band song, “Lonesome Loser”. The upbeat, innocent sound of the song is a good fit for the opening scenes of the film, when everything is fine, while obviously foreshadowing later events.

At several points, Lola sings or listens to Kasey Chambers’ “Not Pretty Enough”, a fitting theme song for her. It’s appropriately introduced at a time when things are becoming unnerving, and the lyrics communicate Lola’s underlying insecurities perfectly.

The background music is kept sensibly low, with appropriate points of interest. One particularly fine example comes at a time when Brent, tied to the chair, has not yet been subjected to any physical harm. On denying Lola’s advances, her father calmly places a hammer on the table. This small action is accompanied by a short, sudden spike in the music’s intensity, conveying an ominous, subtle sense of panic as Brent eyes it off. 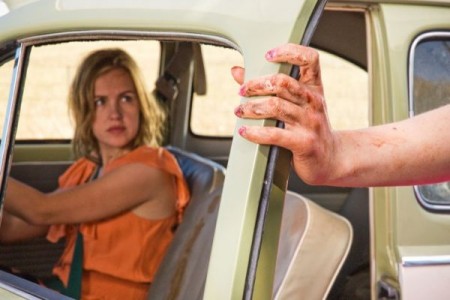 On the disc are the usual extra features, such as cinematic trailers, director’s commentary, stills galleries, and the like.

The standout features include the director’s previous short films, Advantage and Ben. Both are in a similar vein to the main feature – disturbing, character-driven stories, and are quite good, if not slightly confusing.

Of particular interest is a short behind-the-scenes documentary, dubbed “The Super Awesome Featurette: A Runner’s Story”.  From the perspective of an oft-overlooked crew member, the piece follows the runner Tommy, as he buzzes around the set bothering people with his phone camera. It’s an entertaining look into the processes of filmmaking. One scene has Xavier Samuel (Brent) and Robin McLeavy (Lola), in full bloody makeup, drinking coffee and mucking around with each other and Tommy, in jarring juxtaposition with the film. Definitely worth a look. 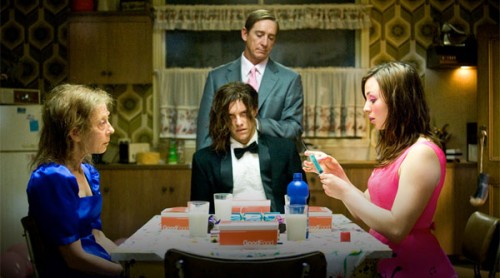