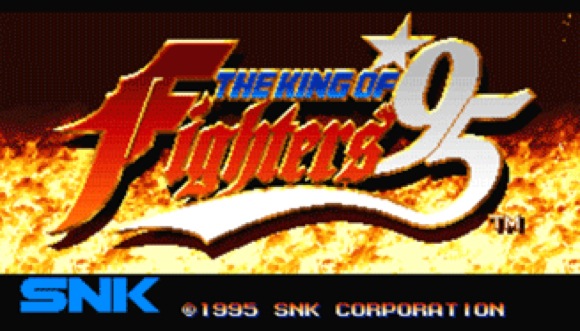 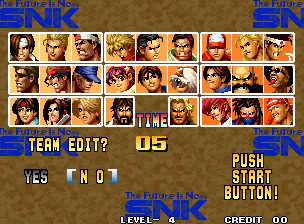 The King of Fighters are back for another years tournament, bringing the worlds most powerful fighters together. The one bringing them together known only as “R” none other than Rugal, who was suspected to have died when he blew up his aircraft carrier in ’94. All the same contestants are back for another go, except Team America who got dropped for their replacements Billy, Yagami and Kisaragi.

The story may not be that strong but then again I can’t remember the last time I played a fighting game for the story alone, it does its job of creating a reason and a boss for the fighters and that’s all it needs.

The game holds up just as good as it did the day it first appeared in the arcades, with what appears to be a perfect port of it. Not to say the gameplay doesn’t still have its issues. The A.I won’t be going easy sometimes finishing you off in 4 hits, appearing to be very cheap at times pulling of the same move in a row knocking you to the ground each time just to get back up and knocked down again. 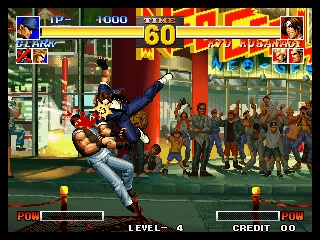 Best bet is to pull out another controller and get someone round to have a match against and if you do pull out an arcade stick, these hold up brilliantly making the games combos easier and more forgiving, giving you that true arcade feel of standing infront of those old cabinets.

If you can’t get someone over to play with then online might be your choice, but it all depends on how well a connection you have in the end really and if you can even find a game at that, while I was looking the most that was ever on was four other people, so unless you have someone you plan on playing with you might not have much luck finding someone 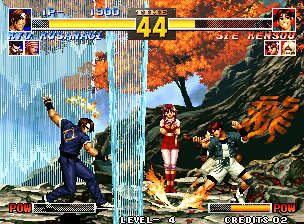 Some games can age gracefully and others just don’t hold themselves together, luckily this is one that keeps itself looking great. Characters have a very anime inspired look to them some being very much outlandish in look, like the hulking mass Chang Koehan that towers over others, with a massive ball and chain over his shoulder.

It has some brilliant animations for the time, they may look blockish at times but it’s a very minor issue, and the pace of the game makes you forget about them as you watch the smooth animations. Each background has a different atmosphere from the industrial yard too the thunder rainstorm in the forest with trees struck by lighting and all, each one giving a nice feel.

Sound wise it’s a mixed bag some background songs sounding excellent and others just sounding bland with no real kick to them, the sound effects are somewhat the same great for a few characters, then empty with most of the others, Kyo sounding like a little kid for example which gives the feeling of not much power behind the blows he throws 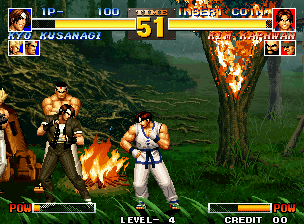 With an A.I pulling cheap moves off at you continually most people will get over this and just give up, but that isn’t where the game is at, doing some 3V3 match’s with a mate sitting on the couch is how it’s meant to be played and in this the game runs well, with a roster of 26 characters you will be at it for a while.

It was the one that changed up the series back in the day letting you select your team, and having it still around today and getting released, has to mean they did something right.

The King of Fighters ’95 gets a