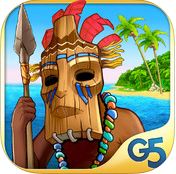 Overview
It’s time to go back to the island…before you even went there…it’s a prequel thing. Explore the island as Yati, a tribe child, as he journeys towards his future. Plagued by visons from the spirit world, just what is he to do? And who are these mysterious strangers who have ventured to the island? 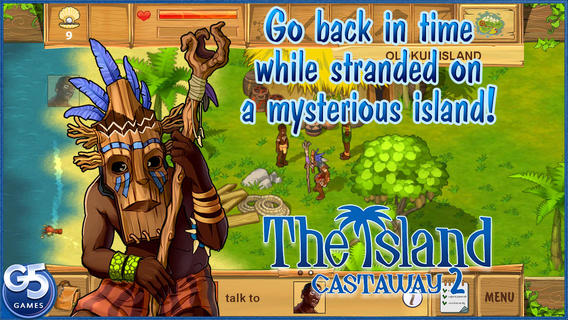 Story
The game opens with three sea faring voyagers, sent to a mysterious island to retrieve a sample of water. However, there is foul play afoot as hidden agendas and greed take hold. In addition to the water sample, two of these men seek something more, something valuable: Gold. The men break into a hidden chamber filled with golden idols, only to be stopped by a local tribesman. Then…it was all a dream, a premonition really.

The game then cuts to Yati, a tribe boy said to have dreams of the future. With that in mind, and after talking to some of his friendly tribe members, it is decided that it is time for Yati to become a fully fledged tribesman. In order to do so however, he must complete three trials. Once he does so, Yati must pick his life’s trade, be it warrior, gatherer or even shaman. But when strangers visit the island, Yati has yet another issue to deal with.

Over the course of the game, Yati engages in conversation with a number of various tribe members. The first time they are spoken to, a small text block appears explaining some details about their past. Whilst this does provide some characterisation, they never really go beyond their roles. 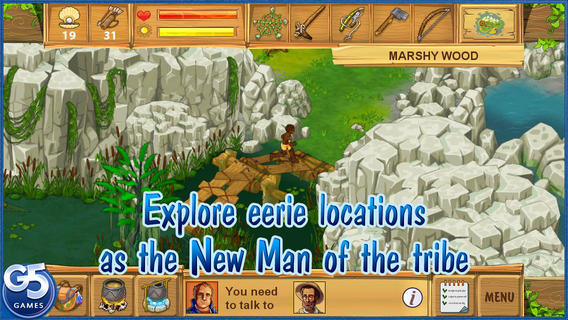 Gameplay
Essentially the game boils down to fetch quests. Many, many fetch quests. Speak to someone, find out what they want, go get it. That’s the game. Despite the variations on what and how you’re supposed to gather something, the gameplay becomes repetitive fairly quickly. I mean, why exactly does one person need a salad made from six pieces of fruit? That’s a lot for one kid to eat…and collect.

One feature that helps alleviate the frustration of the quests is the map itself. By bringing up the island map, you can simply click on a characters respective markers, expressed as a star, Yati will automatically walk towards them. However, as you run around the island, Yati’s health bar will decrease. This can be annoying. The bar drains fairly fast, requiring you to eat in order to replenish energy. The controls can also be a bit of an issue, where tapping on the small screen is not too precise. This often results in overshooting your intended destination. 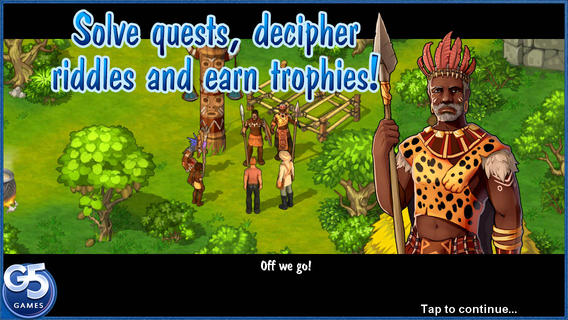 As the game progresses, Yati gains a number of new tools and abilities. One of the earliest skills gained is cooking. As you complete certain task, you gain access to new recipes, allowing you to make various dishes, each of which provides a larger health boost than individual foods. Yati also gains access to physical abilities such as fishing, planting and tree chopping, all of these things allow you to proceed with your tasks and make the tribes people happy. Amongst these physical tools, Yati also gains access to potions. These have varying effects and are brewed via a recipe. They grant powers such as faster running, shielding from animals and even teleportation, helping you move around the island with less hassle. 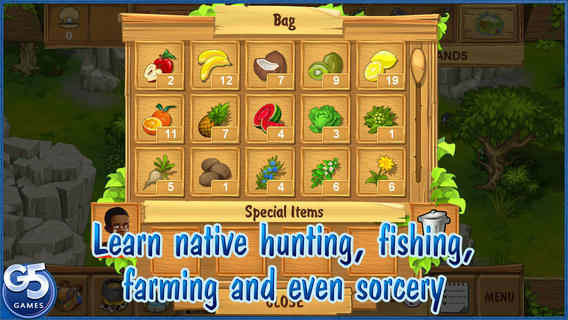 Visuals and Audio
Castaway 2 features a crisp and clean visual style. The island itself is very vibrant, it is a tropical island after all. Whilst characters are conversing a picture of them will appear, providing a more detailed look at them not possible via the regular game view. The characters themselves are also fairly unique from one another, adding variation. Food also receives the same treatment, receiving a more detailed picture in the menu. Delicious.

Being that you are a tribe member on a tropical island, the music is very simple, yet upbeat. Bongos and flutes play heavily in the soundtrack, adding to the tropical island nature of the game. Castaway 2 also features voice acting which is…OK. Whilst not expressly bad, it’s not particularly good either. A lot of the time you can tell that the voice actors were reading off a script. Characters often sound flat, which takes away from the attempts to add a sense of personality. 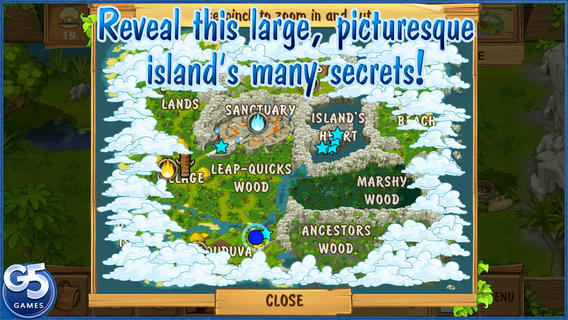 Overall
The Island: Castaway 2 is alright. Though the quests get repetitive fairly quickly, the game continues to add elements in an attempt to spice it up a little. The additions of tools and potions do add to the gameplay, but they too become routine. Having said that, it’s not a bad casual game. Explore the vibrant island, the mystery of Yati’s power and discover what the strangers are up to. Play for fun, just don’t expect an intricate and perilous tale.