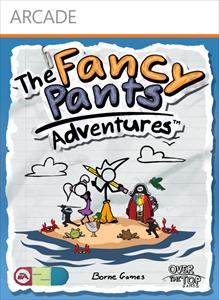 The Fancy Pants Adventures is a simple (if slightly absurd) concept. Made as browser flash games, the originals featured a stick figure sporting a spiky hair-do and bright orange pants running through worlds populated by spiders and snails for the most inane reasons possible. The newest tale of the fancy-pants wearing hero is pretty much the same thing, but on a console. A semi-lucid combination of a Sonic game, a Mario game, and a Don Hertzfeldt cartoon, The Fancy Pants Adventures is a pleasant, momentum-based acid trip. 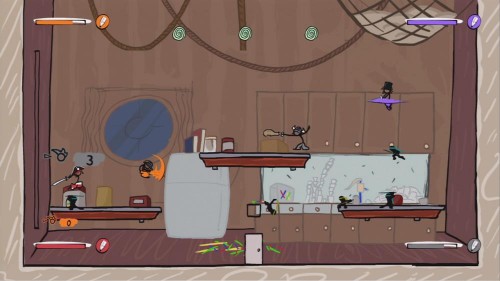 The previous entries in the series had plots so ludicrous and silly the characters themselves would often point out how positively nonsensical the whole game was, and The Fancy Pants Adventures proudly carries on that tradition. The game begins with our intrepid protagonist being woken by a messenger from the king, who’s king-sized bathtub has been stolen by pirates. After the tub is retrieved, the pirates decide that their captain is not all that captain-y after all, and kidnap Fancy Pants Man’s sister, Cutie Pants Girl, to be their new captain. Thus, Fancy Pants Man is forced to traverse 11 colorfully bizarre levels to save her.

It’s not much of a plot, but it works well enough. Where the game’s story side truly shines, however, is in the bits of dialog the NPC’s scattered throughout the game toss out. Almost always worthy of a chuckle, the characters have no qualms against breaking the fourth wall, and at one point even try to dissuade Fancy Pants Man from finding a useful item by claiming that there is absolutely no reason to go back a level and check a secret cave, because that would just be poor game design. 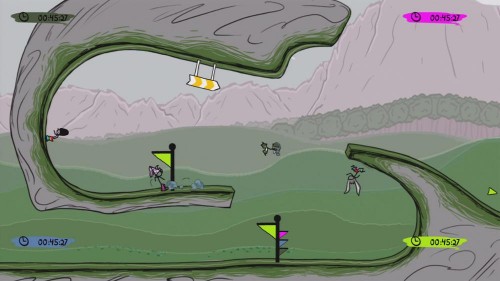 Here is where the game really shines (at least, for about half of it). As Fancy Pants Man, you sprint through platform-filled levels collecting coin-analog squiggles and building up momentum for traversing loops and making wide jumps. In that manner, it evokes the feeling of playing a classic 2D Sonic the Hedgehog game, but without the crushing knowledge that the franchise will fall to the level of making games like Curse of the Werehog. Occasionally, you will encounter enemies in the forms of spiders, snails, gun-wielding mice, berserker ducks, and brightly-colored frogs, all easily dispatched with a bounce on the head. Because hopping on enemies provides an extra-high jump, the game will often force you to time your kill to get to hard to reach areas, a two-birds-with-one-stone philosophy I can appreciate, as it allows for combos involving building up speed, running through a loop, and leaping at just the right time to kill an enemy and maintain your momentum through a long jump, giving the whole game a parkour vibe. The addition of wall-jumps and back flips just adds to that delightful sensation of being a speedy badass.

And for the first half of the game, all was well. However, once you begin closing in on the pirates’s lair, you pick up the ability to wield a pencil like a sword, complete with charge-up attack and flying stab. Here is the first real hiccup in the game. The weapon combat, while kind of fun, looses its novelty in about 5 minutes. After that point, it just starts getting boring and annoying as it throws off your parkour groove. While I understand the urge to include new moves with the console game to differentiate it from the free PC flash games, I think it it infinitely more satisfying to just keep bouncing on your enemies. Because of this, I feel the last several levels are much less fun to play than the weapon-less levels, and my overall enjoyment of the game suffered for it. 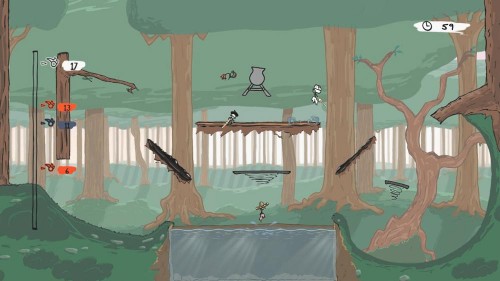 Being a lonely nerd sitting in my hovel pining away for company, I never actually got a chance to test out the four-player co-op, which disappointed me greatly. Many of the levels have areas you can only access with the help of a buddy, and the some of the combo moves two players can pull of just sound freaking fun, like one player rolling up into a ball to be kicked across the level by his friend. But while I can attest to the multiplayer sounding fun, I cannot actually give an opinion on the subject, having not played this portion of the game.

Another lame thing about not having other people playing with me was the fact that I unlocked new items slower than I would have otherwise. While you still unlock decorative items like hair styles and hats, new pants, and new weapons, playing solo, you get them much faster with your friends along for the ride. These item unlocks grant the game a certain amount of replayability, as you need to get all the difficult to reach stars, collect thousands of squiggles, find and complete all the secret rooms, and beat all the micro-trials to 100% each level and unlock all the items. My personal favorite configuration was a purple top hat, camo pants, and a wooden sword.

As far as looks go, the game retains a hand-drawn style of art throughout, which I think fits very well with the absurdist humor. It give the game as a whole a Hertzfeldtian (yes, I just made that word up) vibe, which is always a good thing. Beyond that, there really isn’t much to say on the subject, other than it looks good and doesn’t detract from the gameplay, which I think is the most you can really hope to get with the hand-drawn style the game has. 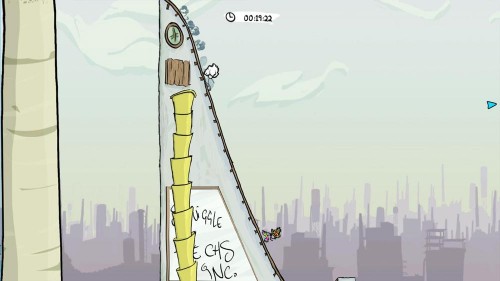 Where the visuals are merely pretty good, the soundtrack is one of the best I’ve ever heard out of a downloadable game. Like the visuals, the songs really seem to fit the game, and never pull too much attention from the gameplay. But if you stop playing and really listen, you’ll find that the songs are actually rather enjoyable in their own right. Hell, I left the game on while I wrote this review just so I could listen to the songs. They’re just downright catchy.

On the whole, The Fancy Pants Adventures is an enjoyable game. Nothing groundbreaking, but a great way to spend an afternoon or two. I can’t speak to if the multiplayer is any fun, but I’d place money on it being quite enjoyable. The addition of weapons was probably a mistake, but it’s a relatively minor one. The art is decent, the characters funny, the soundtrack fantastic, and the gameplay generally smooth and fun. I’d say it’s well worth the $10 price tag, and recommend you pick it up.