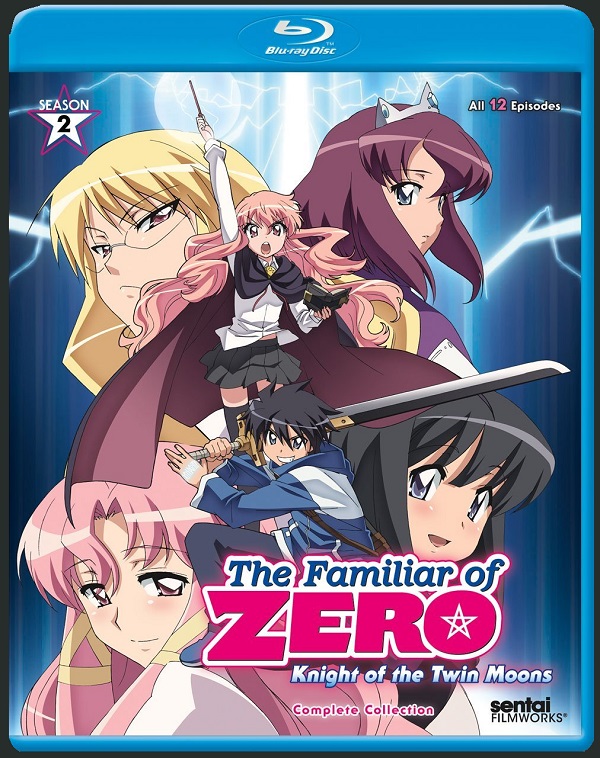 Overview
Despite being successful enough in Japan to warrant four anime seasons, The Familiar of Zero never got far off the ground in North America when it was originally released. The first season was licensed and released back in 2008 but beyond that the following seasons were never pursued. Until now that is, with Sentai Filmworks not only re-releasing the original first season but continuing into the second with The Familiar of Zero: Knight of the Twin Moons. So now that the second season has debuted in the West, is it worth continuing?

Story
It is worth noting that since this is the second season of The Familiar of Zero, those who have not watched the first season will be missing out on quite a few details as very little explanation goes into the events that take place in The Familiar of Zero: Knight of the Twin Moons as everything was started due to the events that occurred over the course of the first season. 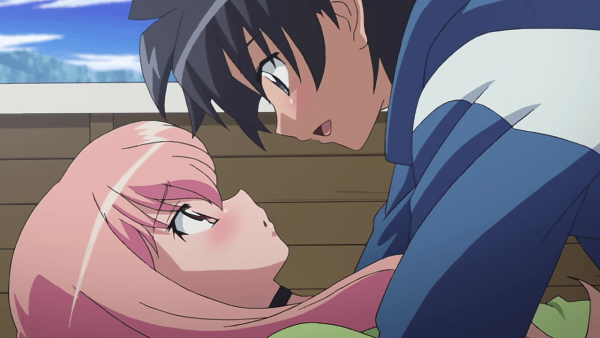 That being said, thanks to Saito choosing to assist Queen Henrietta, Louise, and the defending forces of Tristain in the battle to drive back the invading Albion’s forces, he forfeited perhaps his only chance at returning back to his original world. Now that he has chosen to remain in the magical realm with Louise, Saito continues to act as her familiar while trying to build a relationship with her which seems to have practically reset itself from the end of the first season due to her tsundere nature.

Since the Albion forces have begun to move, tensions are high in Tristain and with very few people she can trust, Queen Henrietta requests Louise and Saito to work for her in secret whenever the need arise. This happens quite quickly as Henrietta soon finds herself wrapped in a twisted plan of the new leader of Albion, the familiar mysterious woman Sheffield. While Saito and Louise are able to rescue Henrietta, this solidifies the fact that the nation is at war and it is from here that The Familiar of Zero: Knight of the Twin Moons finds its setting, albeit one that has severe pacing issues. 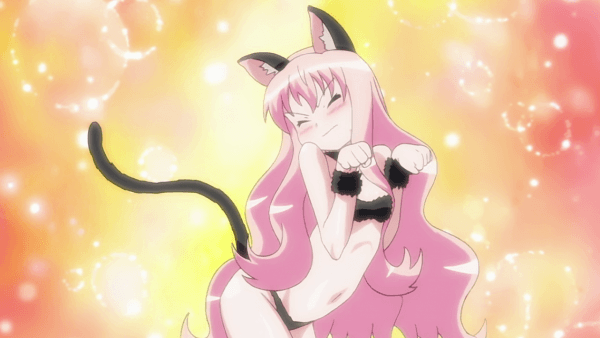 For the better part of this second season, Saito and Louise (though Saito is relied upon far more) are given tasks by the Queen in various single episode story arcs that do feel like they are advancing the story in some way but generally result in little to no development. Where the actual development does occur is nowhere near Louise, as she is barely given any real character growth throughout this entire season. In fact, to make matters worse this season introduces Louise’s two older sisters but who ultimately add very little to the storyline other than to serve as ways for Saito to be abused in different ways thanks to Louise’s constant misunderstandings and his own perverted glances.

This is something of a running issue throughout The Familiar of Zero: Knight of the Twin Moons as the majority of the cast that viewers were introduced to in the first season have now been sent off to war and never shown again. This leaves Tabitha, Kirche, and Siesta as the only established side characters and even then both Kirche and Tabitha play minimal roles here as most of the focus is spent solely on Saito and Louise or on temporary side characters. 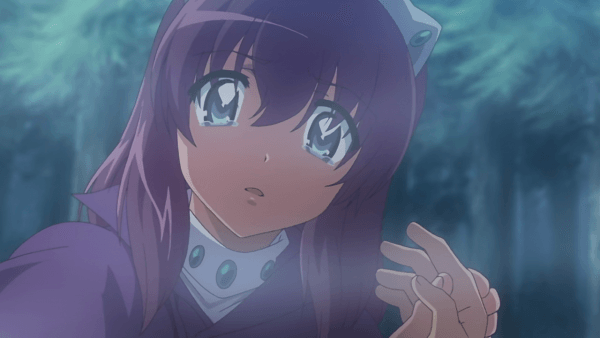 A few new characters are introduced to try and pad things out in the form of Julio, a dragon knight with heterochromic eyes who constantly provokes Saito’s jealousy by making advances on Louise and perhaps the only character to really be given much development this time, the Captain of the Tristain musketeers, Agnes. As the Queen’s most trusted bodyguard, Agnes is a constant presence throughout the second season and it is thanks to this that one of the more interesting side-stories unfolds.

When Agnes was a child her village was mercilessly destroyed by the order of the government at the time and ever since she has worked her way up to try and learn the reason why. As this side plot unfolds we learn far more about her character than most of the current cast at this point and it serves as a great moment in the series, though it feels like her development comes at the expense of the rest of the cast. 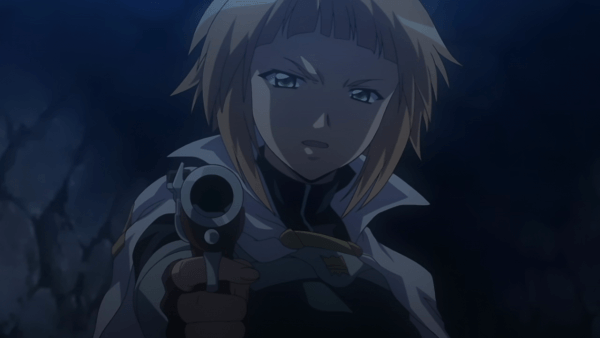 There is something of a running theme throughout The Familiar of Zero: Knight of the Twin Moons as Saito and Louise’s relationship hits a bit of a wall due to their feelings about the war. Due to Louise’s position as a noble, her constant belief that dying for the Queen and for honor is the best thing while Saito, who comes from a world without the need for such things, constantly pushes back at how ludicrous the idea is, since what good is it to die on the battlefield and leave your loved ones behind.

The romantic element between Saito and Louise continues to develop at an odd pace best described as one step forward, two steps back. It is quite evident that both characters are aware of their feelings at this point in the series but thanks to the writing, the romantic element rarely advances due to most of the comedy in the series coming from Louise abusing Saito because of a misunderstanding or out of jealousy. 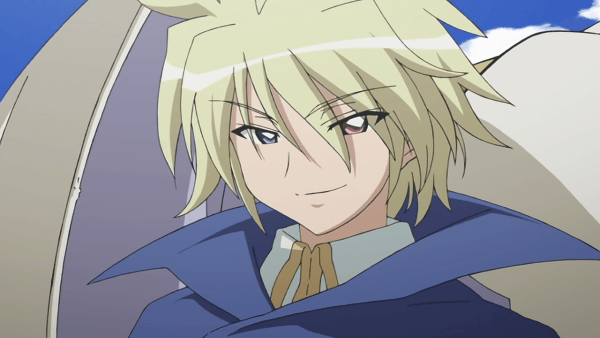 This means that not only does the actual progression feel stilted in this regard, but the comedy remains the same as before and is unfortunately starting to get rather stale at this point. That being said, although The Familiar of Zero: Knight of the Twin Moons does have its missteps, those who enjoyed the comedy from the first season will find plenty more to love here as there is far more comedy than drama save for Anges’ side story and the final closing episodes that deliver a fairly solid story with poor pacing that of course is left to continue into a third season.

Visuals
Although The Familiar of Zero: Knight of the Twin Moons originally aired only a year after the first season, this second season handles the transfer to Blu-ray better than the first. The wide range of colors appear more vibrant than before, though it does seem to be rather fuzzy looking at times. This is partially due to the age of the series however and the often low quality appearances of the characters. 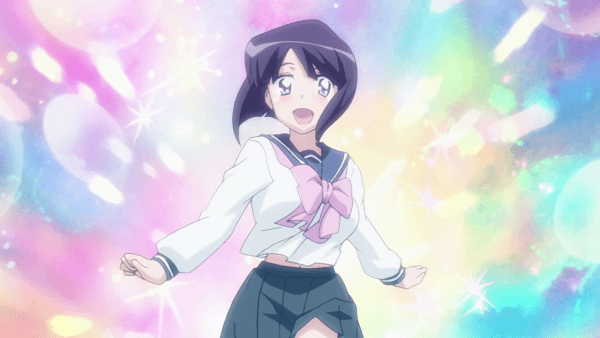 While close-up shots look great and the few action sequences are handled amazingly well, especially near the end. That being said, many of the mid-range shots or any side-profiles suffer from a severe lack of details with unintentionally deformed faces and expressions. As far as fan-service goes, this second season actually features less than the first season since most of Saito’s beatings come from him simply glancing at the chest of a girl rather than ending up in a compromising position.

Audio
Now the first season of The Familiar of Zero featured an English dub since it was originally released with one and since this season was never released in the West, it features only the Japanese voice track. This isn’t much of a loss however as the previous English cast was sub-par at best and the Japanese voice actors, especially Rie Kugiyama, fit their characters perfectly. 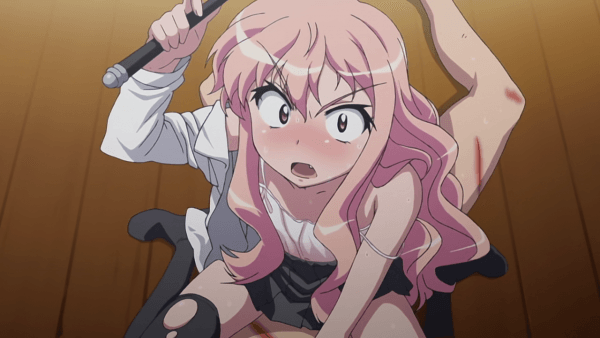 Most of the background music is recycled from the first season which is unfortunate but there is a perfectly implemented instrumental version of the opening theme during the final episode. Speaking of the opening theme, this time around it is “I Say Yes,” by Ichiko which serves as a great intro theme for the series while the ending “Suki!? Kirai!? Suki!!!” by Rie Kugimiya is a nice comedic closing that pulls from Louise’s tendency to call Saito a dog.

Extras
The only bonus features included in this release are a clean opening animation, a clean ending animation, and a few trailers for other Sentai Filmworks releases.

Overall
Those who enjoyed the first season of The Familiar of Zero will find that the series continues well enough in Knight of the Twin Moons despite abandoning most of the side-characters and introducing only one that is really developed in any meaningful way. With a heavy focus on the war between Tristain and Albion, Saito and Louise’s relationship continues to fluctuate through a series of comedic misunderstandings that rely heavily on the same type of humor found in the previous season.

This ends up being an issue with the series as very little actual change or in any significant development between the two occurs in this season without it quickly being forgotten about to keep the status quo, resulting in the season ending almost the same exact way it started with very minimal story progression and brand of humor that is beginning to grow stale.