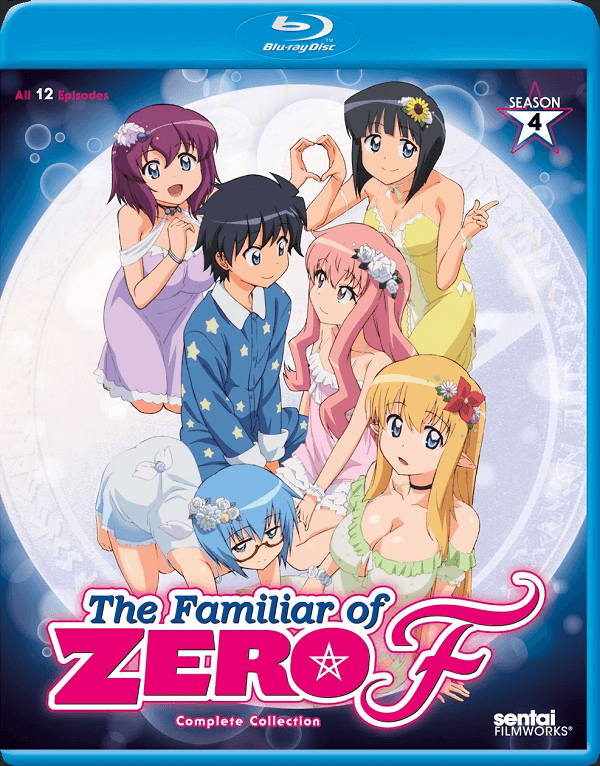 Overview
After rescuing the license, Sentai Filmworks has done a great job bringing The Familiar of Zero to anime fans in the West and now here we are. Going into the final season brings with it a sense of completion but also sadness due to the fact that this is indeed the end of the story due to the passing of the series’ creator, Noboru Yamaguchi. With a set end in sight, does The Familiar of Zero: F manage to find itself a satisfying conclusion?

Story
After surviving many hardships and putting a temporary end to the threat in Gallia and rescuing Tabitha at the end of Rondo of Princesses, Saito and Louise seem to have found a temporary respite from all of the dangers that seem to always surround them. Or at least they would hope so but unfortunately this time of peace is interrupted as Louise, Saito, and Tiffania are invited to the nation of Romalia by order of Queen Henrietta. 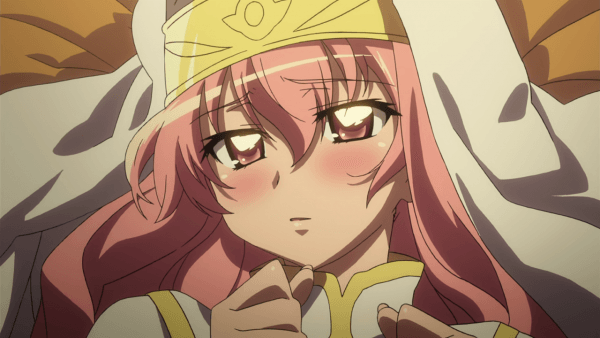 Upon arriving, they learn that not only is the leader of Romalia a Void mage just like Louise, but that Tiffania and their past enemy, the king of Gallia and Tabitha’s uncle Joseph is also gifted with the special power. He states that the reason for their summoning is that all Void mages must assemble in order to save the world. However with the antagonistic Joseph seeing this as an opportunity, it isn’t long before Louise finds herself targeted, though this issue ends up wrapping up rather early in the series.

That is far from Louise’s only reason to be concerned however as Saito’s actions over the last season as well as an early situation with Tiffania that may mark Saito as her familiar as well means that most of the core female cast has started to grow romantically attached to him. With Siesta assigned as Saito’s personal maid after becoming a chevalier, Tabitha seeking to protect him and showing happiness in small gestures, Tiffania who sees him as a love interest after he becomes her familiar as well, and even Henrietta beginning to make advances, the harem antics reach an all-time high near the middle of the final season. 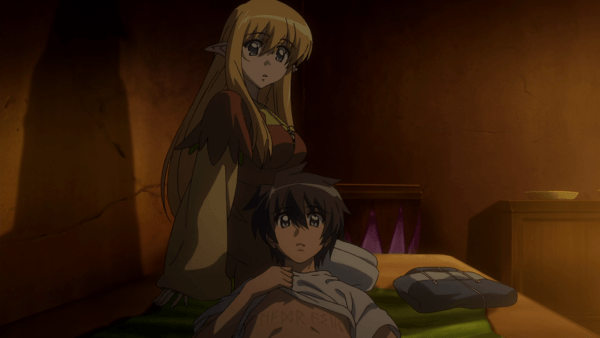 I must say, despite the amount of humor that is still spread throughout the season and the plentiful fan-service, the various harem antics do show just how much the cast has managed to grow as individuals over the course of four seasons. Previously Tabitha was merely a background character but over viewers have seen her status jump immensely to the point of rivaling Henrietta, while Henrietta herself, who may have only seen Saito as a passing fancy and always followed her advisers, commits fully to making her own choices and tries to begin a relationship with him.

It also speaks volumes to the strength of the bond between Saito and Louise, since no matter how many times their relationship appears to be tested in The Familiar of Zero: F, they always manage to make up despite Louise almost always being the one to overreact, although Saito does have some dalliances thanks to a mini-arc involving Tiffania and a race of desert elves. This bond creates a number of shining moments throughout this final season, with the battle between Saito’s group and Joseph serving as a proper closing to those who would target the Void users and Saito’s determination to protect Louise. 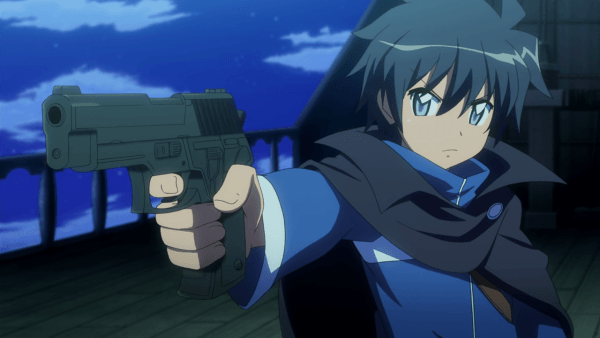 However nowhere is the romantic element driven home the most than near the end of The Familiar of Zero: F. The line of having to save the world wasn’t fluff, as an ancient dragon awakens with the potential to destroy everything in the world. In many ways, this development does feel a bit forced. It does a proper job of forcing any potential arguments amongst nations to an end as they all begin to work together to try and put a stop to this creature but the nature of the has never been mentioned prior to its awakening.

As such, the rise of such a dangerous creature is not only incredibly awkward feeling, but also rather obviously placed in a way to force the series to a conclusion in as much of a rush as possible, as necessary as it had to be due to the author’s passing. That being said, due to the ancient dragon’s incredible power, only Void mages have any chance of slowing down the creature and potentially destroy it. The problem is… doing so would also place Saito in incredible danger and many lives do end up being lost in the battle against the creature. 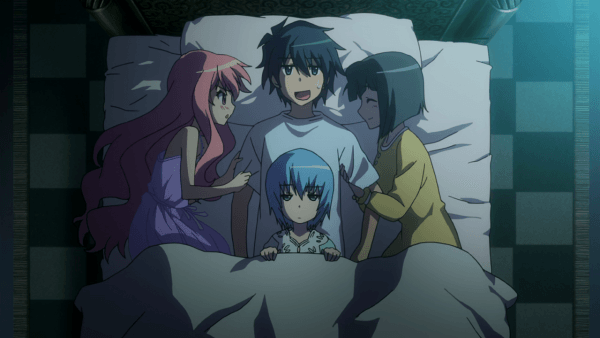 This creates a final few episodes that bring out the best in Saito and Louise’s relationship, though the way it is handled does feel a bit wonky from Saito’s side of things. While there always have been ups and downs, the sacrifices that each attempts to make for the other shows just how much they care for one another at the end, even if it means never seeing each other again. Thankfully, The Familiar of Zero: F manages to deliver something that is incredibly rare in anime nowadays, especially in series that have run on for four seasons such as this, it wraps up with a strong satisfying ending for the couple.

Visuals
While Rondo of Princesses managed to look better than its counterparts with an extra year of evolving animation techniques, The Familiar of Zero: F came out a solid four years after the third season. As such it shouldn’t come as much of a surprise when I say that this season has held up incredibly well in its transition to Blu-ray. The colorful world is as vibrant as ever while the characters appear far more detailed than before. 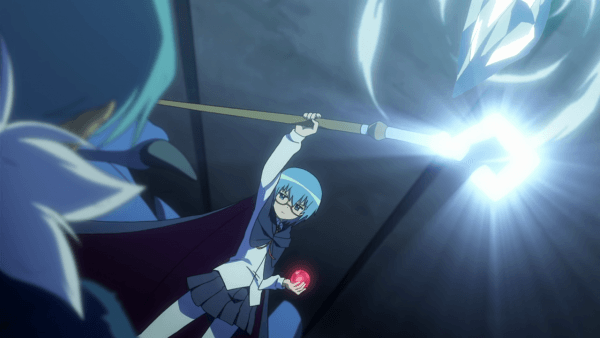 The world itself also has been given a breath of fresh air as numerous new environments are visited with fresh, impressively detailed looking, background art ranging from an interesting looking desert oasis to flaming towns and lava fields. Animation remains fairly impressive as well, though there are some dips in quality and shortcuts used to make some of the less important battles look incredibly bad. As far as the fan-service element is concerned, the series is still filled with an abundance of it though once again it never really pushes past the classic feeling the series gives off.

Audio
The voice track for The Familiar of Zero: F retains the original Japanese voice cast, as one would expect given the series’ consistency for four seasons. The voice actors and actresses have all managed to fit their characters roles perfectly despite the down time between seasons though a few of the newer side characters do sound rather basic. 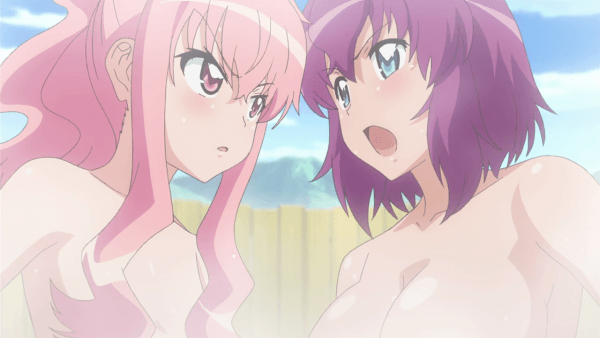 As for this season’s soundtrack, it is sadly forgettable with almost every piece of background music feeling substandard or barely adding to the actual footage, even during combat sequences. Thankfully the opening theme “I’ll Be There for You” by Ichiko is perhaps one of the best the series has had so far while the final ending theme “Kiss Shite Agenai” by Rie Kugimiya is incredibly cute sounding and paired with fitting animation.

Extras
This release of The Familiar of Zero: F on Blu-ray is rather bare-bones as far as bonus content is concerned as the release only comes with a clean version of the opening and ending theme as well as trailers for other Sentai Filmworks releases.

Overall
Due to the nature that The Familiar of Zero: F’s ending had to come about, it could easily have fallen apart in many ways or failed to deliver on an ending that would satisfy fans. Though the road towards the finale does come with more than a few rushed storylines and convenient apocalyptic monsters fans will find that the series knows how to end itself in a big way and that the conclusion of the series is as satisfying as one can find for the loving couple.