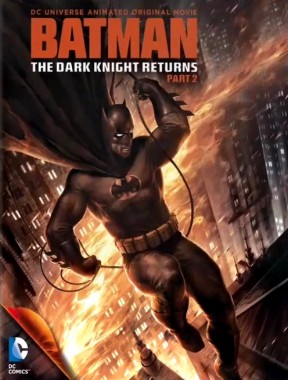 Directly carrying on from the events of Part 1, The Dark Knight Returns Part 2 appropriates the second half of the 1986 Frank Miller limited series comics, almost ‘to a T’. SPOILERS: I will be briefly summarizing/mentioning events from Part 1 throughout, so you should ideally have seen it before reading this review…or, just skip to the end. Here, Batman must contend with a re-awakened Joker after his re-appearance as Gotham’s vigilante hero sparked Joker’s desire for chaos once more at the end of Part 1. He has also sparked the interest of one government lackey in Clark Kent – Superman. Read on to find out if Bruce Wayne is simply too old for this and should have just stayed retired…

The film opens with a The Joker, detained in a psychiatric health facility, watching a news program featuring a debate on pros and cons of Batman’s presence in Gotham. Feigning some semblance of regret, Joker indirectly influences his psychologist Bartholomew Wolper (who also treated Two-face in Part 1…and we saw how THAT turned out!) to get him in front of the public eye on the David Endochrine Show where he can express his sorrow and prove that he is ready to re-enter society. A sly smile upon the doctor’s exit says otherwise…Meanwhile, a couple ex-mutants attempt to rob a convenience store, now working for Bruno – a tall, butch, neo-nazi woman with a machine gun. 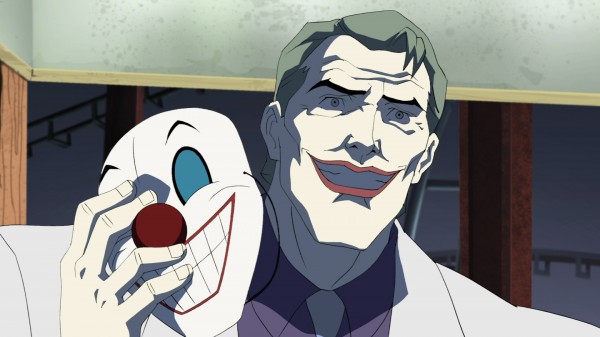 In disguise, Batman thwarts the hold-up and has the upper hand in the encounter when the Man of Steel interrupts proceedings, proclaiming that they “have to talk”. He has been tasked with ‘settling’ Batman, with the mission coming straight from the top – the Presidential office. The U.S. President likens Batman to a “wild, bucking bronco” who has ‘up and kicked over the fence, making all the other horses crazy’. They arrange their talk for another time. That brief meeting marks the beginning of the set-ups for future events in the film. Commissioner Gordon officially steps down, allowing his successor Ellen Yindel – who is anti-Batman – to take over, The Joker begins to organise his evil plans and the two super-powers of the DC Universe – Batman and Superman – have their first chat in over 10 years (since the day the activity of super-heroism was effectively banned).

There is a palpable tension between the two ‘frenemies’, but also a large amount of respect. Superman warns that a day may come when a member of authority will require he retire Batman himself. As was the case in Part 1, the film is inter-cut with news broadcasts throughout Gotham which lend an eye to the views of the public, but more genuinely the sensationalist media themselves. But here, we also periodically get taken to a war with soviet troops in Corto Maltese where Superman is leading the charge and almost single-handedly winning the war for America. As the film plays out, everything comes to a head and builds to a tense crescendo; newly appointed Commissioner Yindel pursues and corners Batman, The Joker returns to his killing-spree ways and the war in Corto Maltese intensifies.

A true high point for the film is the climactic and murderous chase and confrontation between Batman and The Joker. It must have been the reason for the film receiving an M rating (outside of the U.S., where it is PG) as The Joker shoots down men and women. willy-nilly, like it means nothing. There is blood, gore, extreme violence…and when Batman catches up to him and they are face-to-face, The Joker all but forces him to break his vow. I won’t say more in case people haven’t read the comic, but it’s the moment in the film where everything changes tonally.  It is an amazing scene, and only happens little more than half way through the runtime, which is one of the weird aspects of adapting a four part comic series; the individual story arcs end, but the film keeps going. 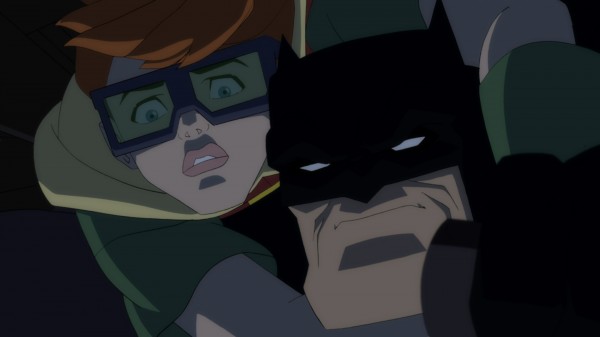 I can’t say much more without ruining the plot, except that you can expect an epic battle with Superman that has the former Green Arrow, Oliver Queen, make an impactful appearance. If you’ve read the comics, you know everything that happens, but you’ll also know just how good and unique a tale this is in the pantheon of Batman storylines. It has been regarded as one of the most influential works in comic history, and though I feel this film has adapted it well, I’m not sure it could ever compare to the impact the source material had on readers that first time they picked it up and began to read within its pages. It is dark, brutal and at times depressing, and definitely flows better than the first. All Batman fans should be satisfied by the storytelling here.

Visually, it’s hard to translate a graphic novel into an animated film without completely copying the style. And if that were the case, what would be the point in doing so? So it’s completely understandable, expected and warranted that any adaptation of the source would take a bit of a left turn in that department. And I feel like the film-makers did a fairly good job in that balancing act of making it look their own, yet reminiscent of the original comics, encapsulating the mood and atmosphere of the panels by Frank Miller. It may be a little lighter and brighter than his work, but it’s still the most dreary and down-trodden Gotham we’ve seen in the medium.

There is good reason for Part 1 receiving a Golden Reel Awards nomination for sound editing and it carries through into Part 2. It’s probably one of the most complete, well-synced, well done audio jobs I’ve ever heard on a direct-to-DVD release. To make sure I was acquainted with the story up until this point, I went back and watched Part 1 not long ago and was in awe of the score by Christopher Drake. It perfectly captured the time period during which The Dark Knight Returns was written, with that fast, electronic/synthesised sound that was the norm in the 80s. It actually immediately reminded me of the film scores for Robocop, Terminator, The Warriors and Tron. 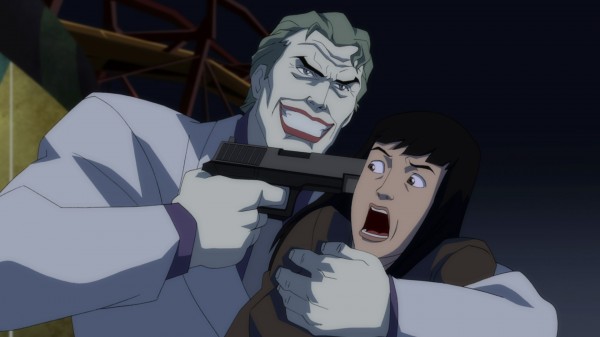 That being said, the music for Part 2 veered away from that sounds a little whilst retaining the musical motif of the main theme. I think it worked well as an accompaniment to the Mutant threat, thematically, and seeing as they weren’t the focus here, I guess they took that signature sound with them. And speaking of Robocop, Peter Weller reprises his role as ‘Bats’ in Part 2 and, while I am a fan of his work, I feel that his Batman is just a bit too flat and monotonous. Michael Emerson (Lost) does an admirable job as The Joker, as does the rest of their cast with their respective roles. There are no true audio settings outside of language tracks and subtitle options, which include English, French, German and Spanish.

The special features included amount to two “trailers” as they are classified and listed under that sub-menu. The video titles themselves include the words “sneak peek” and “preview” (on the promotional material & DVD box itself), which is also quite misleading. The Preview of DC Universe’s Next Animated Movie, Superman: Unbound, along with a Sneak Peek at Batman: The Dark Knight Returns, Part 1 are more like full-blown making-of featurettes. They display original storyboards, whilst providing us with sound-bytes/interview footage from members of the production team on the development of the film. We also see some concept art, as well as some video from the VO recording booth with the actors (along with their own interview snippets.) They are approximately 10 mins long each. 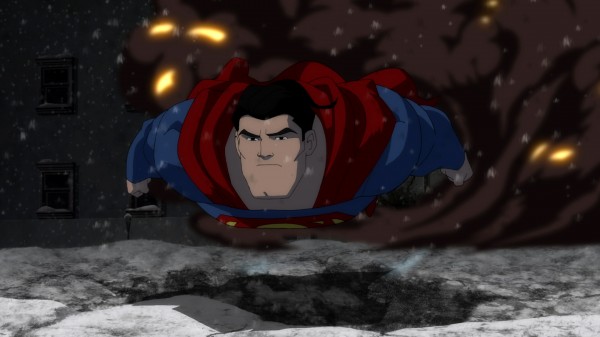 The Dark Knight Returns Part 2 is a decidedly different viewing experience for those not familiar with the original limited series/graphic novel, solely because it portrays Batman in an unfamiliar light. Growing up in Australia, the comic book culture was never as well established or popular here, so this was new for me having never gotten into them myself. But through all the other mediums they’ve reached – film, TV, games, etc. – I came to really appreciate the characters and worlds with Batman being my favourite franchise of them all. Witnessing Batman riding a horse and using a gun was quite surreal. And don’t get me started on the female Robin! The story is great, but doesn’t quite flow as an animated film…it’s evident where the arcs of each issue of the run start and begin in the film, although few plot points do carry on to ensure a somewhat consistent thread.

As for the DVD package itself, I was disappointed in the basic, non-descript presentation and small number of extras (although the content was satisfactory). The video/audio transfers are almost perfect however, yet I am still at odds with the pricing of home media releases, especially here in Australia; $30 for 90 minutes of content? It’s always in the back of my mind, and when you consider that the Blu-Ray (just $5 more expensive) comes with better transfers, and a LOT more special features, I can’t recommend the DVD as particularly good value. But if you’re a fan of the caped crusader, and don’t have a Blu-Ray player, you should pick up this release. Just watch Part 1 first, naturally.