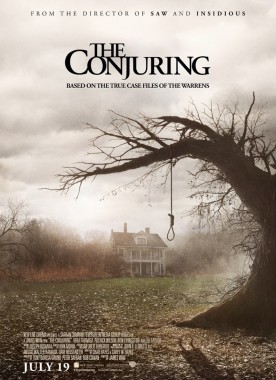 The Conjuring is director James Wan’s (Saw, Insidious) latest horror film, and is based on the true case files of The Warrens. Ed and Lorraine Warren were highly prominent American paranormal investigators; Ed a demonologist, author and lecturer whilst Lorraine specialised in clairvoyance and light-trance medium work. Stories from their career have formed the basis of many iconic horror films of the past 3 and a half decades (The Amityville Horror included) that deal with hauntings. James Wan could be heralded as the voice of the genre for a new generation, but does he actually manage to conjure up any legitimate scares with this newest tale, or should we just saw his career in half right here, right now? (dreadful puns…)

The Conjuring starts off with a prelude to the case that serves as the main focus of the movie. Meet Annabelle (seen below – in real life, she is a Raggedy Ann doll). Annabelle is the property of two roommates, who call upon the Warrens after they found her in different positions/locations throughout the house and even ostensibly writing on parchment with crayons. One of the most fabled and talked about possession tales of our time, the real-life counterpart was much more sinister as it reportedly choked a man out of his sleep. It is held locked away inside of a plexiglass box at the Warrens’ Occult Museum; a room in their Connecticut home. 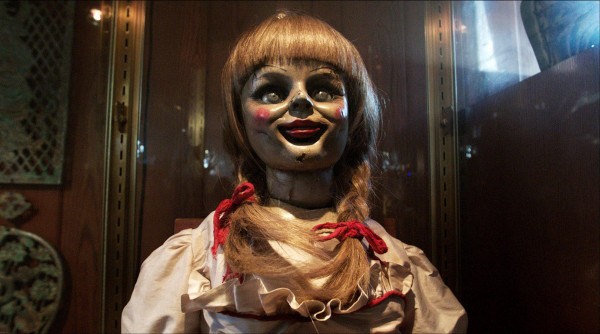 What does this have to do with the Perron family; the subject of the movie? Not much…in fact, nothing at all. Annabelle is appropriated for the purpose of a) featuring the “creepy doll” trope purely because it is one of the most common fears in the world, and b) to play off of the real-life legend and show just what the Warrens had to deal with in their line of work. When the Perron family come into the picture, however, even the Warrens would not be fully prepared. In 1971, Carolynn (Lili Taylor) and Roger Perron (Ron Livingston) moved into a somewhat dilapidated farmhouse with their 5 daughters – one of which has to represent the stereotypical brat, naturally.

First bad sign: their dog Sadie refuses to enter the house and barks constantly at their bedroom window on the first night. On the same day, whilst playing a game of “hide and clap”, one of the girls accidentally breaks a board in the closet wall that leads to a secret cellar (bad sign number two). In the morning and over the next several days, more strange paranormal occurrences – not the least of which being one of the daughters seeing and being attacked by an ghostly, elderly woman – which leads Carolynn to track down the Warrens and attend one of their seminars, where she proceeds to practically beg them to investigate the household. The couple agree and hold their investigation as per usual. 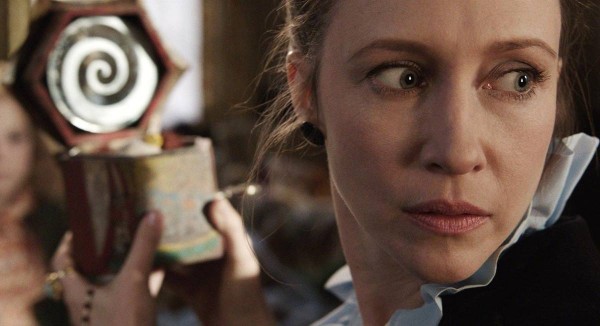 Lorraine (Vera Farmiga) being a clairvoyant, can pick up on certain things that even her husband Ed (Patrick Wilson) can’t. She sees the evil force that haunts the Perrons, and is reminded of her face-to-face run-in with a demon on a past job which all but wrecked her emotionally. After more paranormal activity, and doing some hard research, the Warrens discover the grisly past of the land relating to a practicing witch named Bathsheba, who sacrificed her children to the Devil, and laid a curse for all prospective landowners before hanging herself from the large tree in the backyard near the lake. Now, the premise may sound like your generic horror-movie schtick, and for the most part it is, but it’s all in the execution.

Horror is both a psychological and sensory medium. The movie runs just under 2 hours, but doesn’t feel necessarily long or overwrought. Not much time passes without some terror creeping its way in. And the film might single-handedly present the highest number of genre-tropes of any recent horror film: the living doll, the spooky house, the frightened dog, the hidden cellar, children’s whispers and giggles, ghosts, checking for a creature under the bed, “the boogeyman” (monster in the closet), the leg-puller, slamming doors, hanging bodies, exorcism, “the power of Christ” AND “the power of love”, the rule of threes and frozen time (clocks stopping at witching hour). Heck, there’s more, but I’m afraid I may have already stirred an evil presence just typing this…

James Wan is not your traditional director; he always strives to take the art form of creating true horror further than where he found it, and that translates into a unique, unconventional directorial style. If you think you will get a reprieve in a simple landscape shot, you’re wrong. He maintains a heavy sense of unease and anxiety with the repeated use of the dolly zoom (otherwise known as the “Hitchcock Zoom”, “Vertigo Effect” or “Jaws Shot”), as ever-so-slight as it may be for the most part. When using this effect on something as unassuming as a shot of a house, or any outdoors daytime scene, it takes away that comfort and the perceived confidence that you are safe and keeps you on edge. 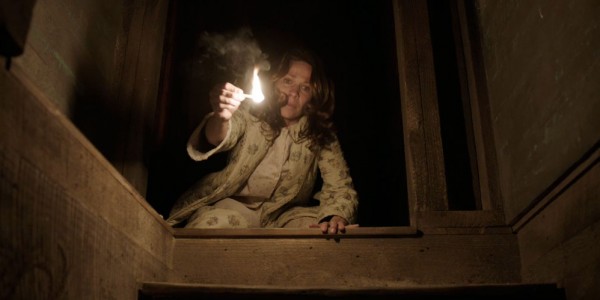 Wan also utilises other rare/uncommonly used camera techniques, such as an “upside down shot”, which acts to disorient the viewer even in the most harmless situation. He also plays with dark and light extremely well. What Wan does better than everyone else in his field, however, is build tension. His shots linger longer than you expect them too, either lulling you into a false sense of security that too much time has passed for a scare to occur and then hitting you with the fright, or going the opposite route and actually achieving the fake-out in an effective manner. In fact, that’s exactly the appropriate word to brand Wan’s craft as, above all else – effective.

The score is very reminiscent of the soundtrack to Insidious, and that’s because composer Joseph Bishara scored both (trivia: he also plays the main villain in both films). It’s clear that he has developed a great working relationship with Wan, which is beneficial for the viewer because Bishara’s full-frontal assault on the ears complements the visuals and the pace perfectly here. The sudden attacks that ratchet from silence to almost deafening, the eerie backing chorus and the strings and horns all played in such a manically discordant fashion reflect the tone of the on-screen happenings, whilst supplementing and intensifying the current mood.

The Conjuring is James Wan at his best. Although the conclusion suffered in my eyes (completely over the exorcism resolution for virtually every second horror film released), this is a master-class in how to shoot and produce a modern horror film. It is quite ironic to use the word “modern” in describing The Conjuring though, because in many facets it is a throwback to horror of the late 70’s – it features more classic genre tropes than any film in recent memory after all. But again, the masterful use of suspense and dread, enhanced by amazing direction and camera work, makes The Conjuring worth seeing. Fans of being frightened should catch it before it goes out of cinemas within the next month for the best audio-visual experience.