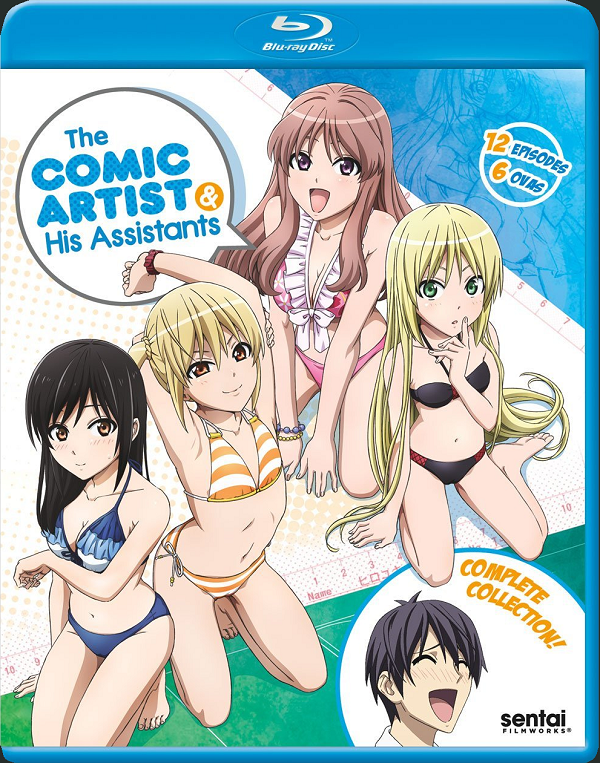 Many times when a 4-koma series is given an anime adaptation the studio usually strings together a full length episode with various breaks in between each gag set up. Occasionally however these four panel series are released as simple anime shorts and with the adaptation of The Comic Artist and His Assistants the studio opted to take the latter route bringing the twelve episode series out in thirteen minute chunks. The question is, is this ecchi comedy series worth checking out?

A young manga creator named Yuki Aito has managed to achieve his dream by being able to publish a monthly manga series to some level of success. He has the passion and although he never really tops the charts in popularity he has found himself a solid following leaving him regularly in the middle of the popularity polls. The thing is, Aito’s manga of romance is primarily known for one thing and it doesn’t really come with his writing. 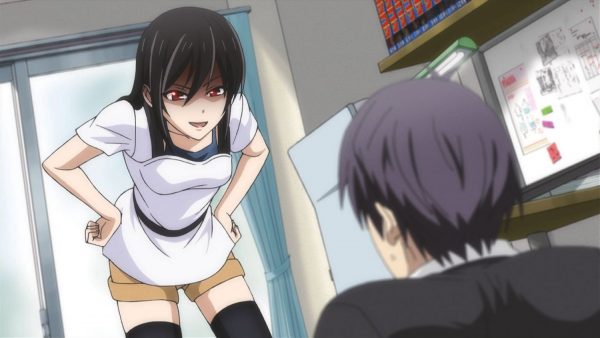 It focuses on his love for panties and everything else related to ecchi comedy. His obsession often leads to conflicts with those around him who want him to try and focus on more than just drawing panty shots and this often causes numerous troubles for both his editor, a high school acquaintance named Mihari, and anyone who is assigned to assist him, starting with Ashisu. To top it all off, Aito is also completely oblivious to the feelings of others as he often just blurts out exactly what he is thinking and has no experience whatsoever with his subject material.

This means that while Aito might be drawing a series where the main character has a love interest and wonders how her breast may feel, he simply has no idea and even goes so far to ask Ashisu to help him out in that regard to humorous and cringing effect. In fact, The Comic Artist and His Assistants can be summed up as simple as that. This is a show that is rather humorous at times and can be downright hilarious but also can be rather cringey primarily due to the way that the main character Aito ends up acting. 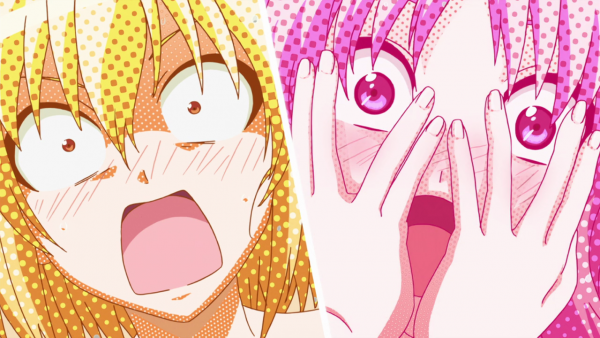 There really isn’t too much of a plot here as each short episode is broken down into even shorter mini-stories that usually are only a few minutes long and give us looks at various scenarios that Aito and the group end up in as he struggles with meeting his deadline, attempts to find research material for the manga, messes with his assistants, and simply gets into strange scenarios with the girls that he is surrounded by.

Thanks to Aito’s perverted and blatantly obvious personality The Comic Artist and His Assistants is going to be a hit or miss series depending on how you react to his actions. It is clear that he rarely ever has underlying motives to various requests he makes of the girls or when he is thinking of something beyond asking them for the sake of helping out with his manga production, he quickly comes clean. This does lead to many looks of disgust from the girls and plenty of pushback but this style of comedy does work rather well since all of the girls, outside of Rinna, a girl who barely knows anything about drawing but is a big fan of Aito’s series and joined him as an assistant because of it, stand up for themselves and are quick to squash any of Aito’s untoward plans. 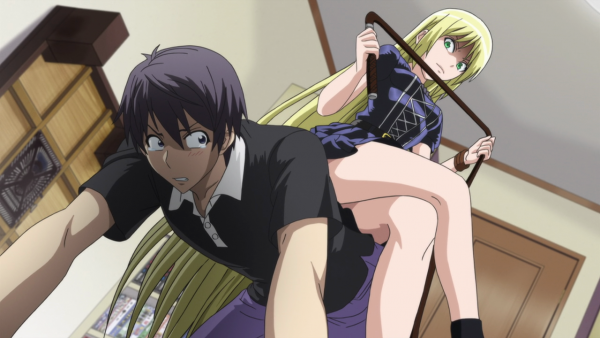 As mentioned before, thanks to Aito often slacking on his deadlines Mihari has not only assigned him Ashisu as his main assistant but even brings in an extremely skilled assistant who quickly has her secrets exposed. Despite running away at first, she is quick to retaliate and set herself up as one of the best characters in the series outside of Ashisu who work as the perfect partner for Aito’s personality as her own cold reactions to his requests provide some of the best humor the series has to offer.

Mix Aito together with his three assistants, the cold Ashisu who aspires to have her own series one day but has an odd love for strange looking creatures, the naïve Rinna, and skilled but easily angered sadist Sena as well as Mihari, the extremely young looking chief editor of the magazine that Aito is published in, and even a mascot character of a cat with a bra on his head and you have a series that may not focus on too much outside of being perverted and humorous but is ultimately highly enjoyable thanks to the chemistry of the cast. 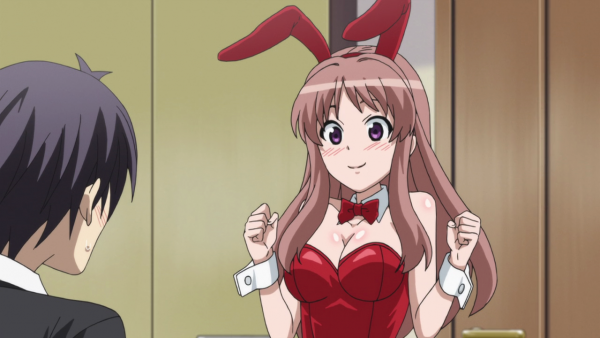 Of course if it isn’t, don’t expect too much else here as very few developments occur throughout The Comic Artist and His Assistants that expand these characters much. We do see Aito change a bit over the course of the series as he learns to listen to others and improve his manga as well as snippets here and there regarding how the girls surrounding him really feel about him behind their often angry or blushed faces, but when the last episode rolls around it feels like very little has changed. In fact, even the aforementioned perverted humor can start to run a bit dry due to its one-note nature making this a series that is best watched over a period of a few days rather than marathoned despite the short episode length.

The animation for this series is handled fairly well with strong attention being paid to making sure that the character designs are nicely detailed and help stand out. The quality does drop a bit when many of the characters are on screen or anything too busy occurs but since most of the series takes place in Aito’s apartment this is a rare occurrence. 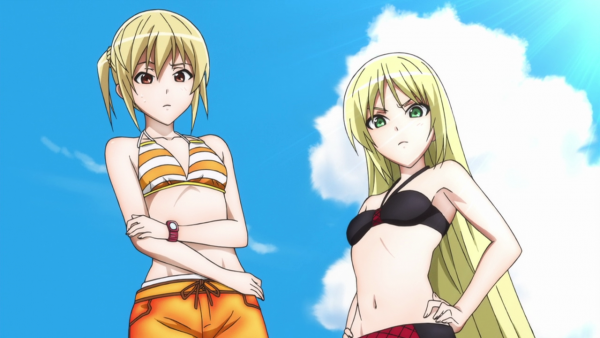 Although The Comic Artist and His Assistants may be an ecchi comedy series viewers might be a bit surprised about how little is actually shown. The animation studio opted to avoid any obviously perverted camera angles on the girls and there are very few actual near-nudity scenes. Sure there are plenty of moments where a girl’s panties will be shown and any time lingerie of any kind appears, whether it is simply Aito shopping on his own or drawing some or appearing on one of the characters, you can tell that the attention to detail really takes a step up from the average quality.

As one would expect considering this is a series of shorter than normal episodes, Sentai Filmworks has opted to release The Comic Artist and His Assistants with only the original Japanese voice track accompanied by English subtitles. This works well enough as the characters are all handled well and the signature tsundere voice actress Rie Kugimiya returns to voice Sena in a fashion that any fans of her will immediately recognize. 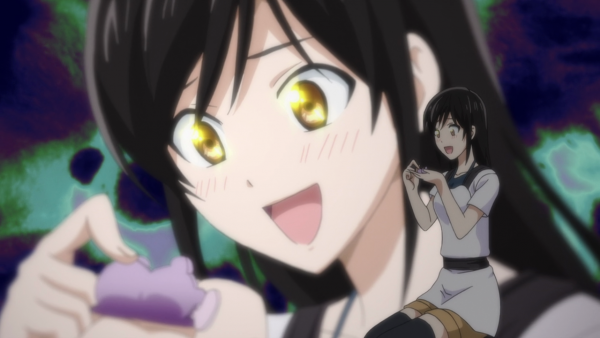 This release of The Comic Artist and His Assistants comes with the standard inclusions of Japanese promo material, clean versions of the opening and ending themes, a karaoke version of the last episode’s ending theme, and six OVA specials to help add a little extra content into this release. 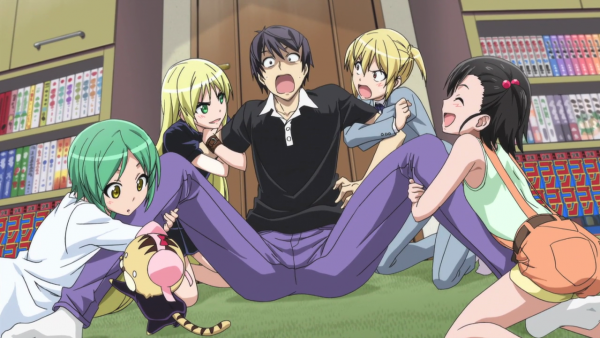 The OVAs surprisingly don’t go too much farther beyond what the series itself offered as far as ecchi content is concerned though a number of the OVAs, which run at usually half the length as a standard episode, are focused almost solely on providing as much laughter or borderline lewd content as possible depending on the special.

As long as you know what to expect when coming into The Comic Artist and His Assistants you will find a fun and often hilarious ecchi comedy series. Rarely is anything in this series taken seriously and while there is no real storyline progress or much of a story in general, the chemistry that the cast of characters and the fact that the series embraces its fan service nature leads to a lot of enjoyable moments.

That being said, thanks to Aito’s disposition some may find him too much to handle if they can’t put up with his perverted attitude and since the comedy revolves around perverted fun, those who are put off by that should stay away. For everyone else who likes that style of comedy such as myself, then this is a series you’ll enjoy as long as you keep the episodes spread out to avoid burning out on the generally one-note humor.
Capsule Computers review guidelines can be found here.