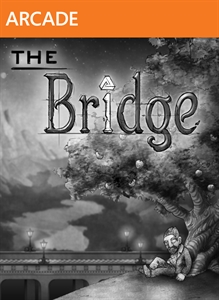 Overview
Puzzle games are by no means a rarity in the gaming world, but to make one stand out it needs to be easy to get into while offering something unique enough to keep players into it. The hard part is for those players that do enjoy it to be able to describe the game in a way that makes senses, but is still intriguing, which The Bridge is able to do that with just two names, Isaac Newton and M.C. Escher. Those with even a little understanding of the two historical men, should be getting an interesting combination of images from that juxtaposition. Does The Bridge have what it takes to tease the brain and live up to the names? Let’s look at what it has to offer.

Story
When the game is first started up, the player is shown a very Newtonian setting, i.e. a man resting beneath an apple tree. Even more interestingly, there is no menu, no introduction simply the man and the tree leaving players to discover how to progress the story themselves, with a few hints and tips if necessary of course. The man is very stereotypical of the normal conventions of scientists, with a goatee, messy hair, and brown suit, I assure you even in black and white I can tell a brown suit. The way the game opens, it sets the precedent of being more about exploration than story, but even then the story it tells is limited. 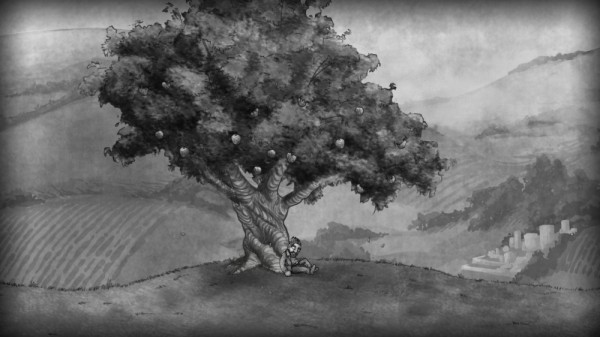 A scant few lines of story in the hub world or at the end of a chapter however do a good job with rewarding the completion of the puzzles, though in such a mind bending game as this it does have a slight problem. With the time it takes to solve all the puzzles as well as the brain power it takes to solve some of them, it is easy to either disregard the snippets of story or forget them all together. Even more frustrating is the necessity to replay the final level in a chapter simply to return and read these bits of story, instead of unlocking the final rooms to read them at the players leisure. While not the most important aspect of the game it would have been nice if more consideration was taken when wanting to re-experience the whole story without having to go through each final level again.

Gameplay
Opening up immediately into gameplay, leaves the player with no idea to familiarize themselves with the controls via a menu, but luckily the game focuses on very simplistic controls and principles. Instead of relying on the character having to possess amazing abilities, they are instead limited to one ability, one convenience, and the everyday abilities of walking around and using things. The tweaks and changes that occur from there on in, come not from the character but the environment that they are in, leaving the puzzles to be thankfully limited to only what is on a level instead of what the character has on them or unlocked. 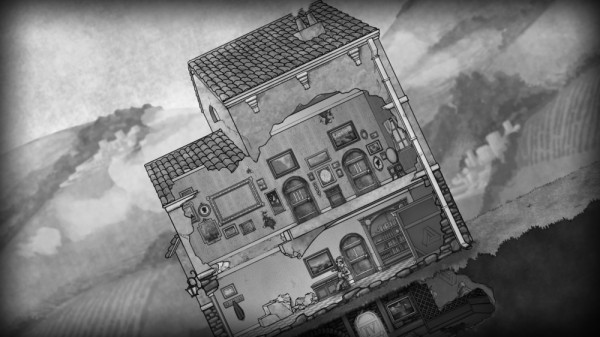 The main ability that the character features, outside of walking and using stuff of course, is the changing of gravity. Gravity is easily rotated via the triggers, or bumpers if preferred to aid in navigating not only floors, but walls and ceilings. While starting off there isn’t much to worry about, later levels include hazards such as crushing boulders and falling off into space. Thankfully, this is where the convenience comes in as player’s can backtrack with the press of a button to unto anything from horrible deaths, to simple errors. Using these as the foundation of gameplay, The Bridge is able to offer a wide variety of challenges as new elements are introduced chapter to chapter.

Adding in concepts like inversion to change both gravity and polarity in one go as well as the veil, which allows the user to use special gravity for specific objects to get them at odds with regular gravity, the difficulty does certainly ramp up, but the slow pace at which they are introduced makes it a very reasonable pace. With the ability to turn back time from mistakes it makes it even easier to not have to worry about getting too stuck or having to completely start levels from scratch unless necessary. 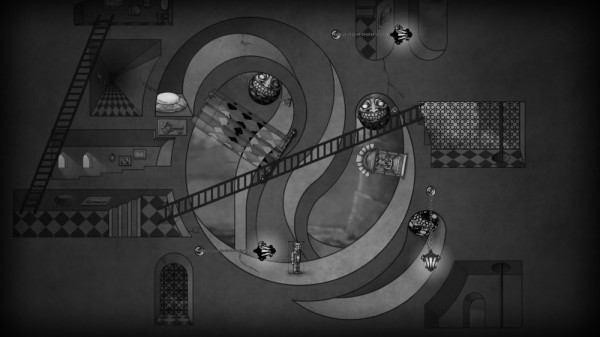 Featuring 4 chapters with six levels a piece, with 4 mirror chapters with even harder challenges once those are completed there is plenty to do in the game. Even more, the inclusion of collectible wisps adds another layer of things to do, with hints to the locations of the wisps in the loading screens of the levels. All this adds up to a game with simple controls that don’t get bogged down as it goes on and get ingenuity in the levels to offer great puzzles for players to have to solve. Puzzles that certainly live up to the inspiration from M.C. Escher.

Visuals and Audio
While the vast majority of the game is black and white, such as works of M.C. Escher, the detail given to the scenes, character, and objects make up for the lack of color. On higher resolution displays the gameplay looks fantastic as the levels are spun about as the character walks across the different surfaces, though on lower resolutions like standard TVs there can be a bit of a problem following what is going on onscreen as bigger levels force everything to be shrunk down and harder to distinguish. However, these levels are still passable even at the lower resolution. There is also fantastic use of music from composer Kevin Macleod, that as the only audio outside of sound effects fit beautifully with the darker themes the occur as the story unfolds. 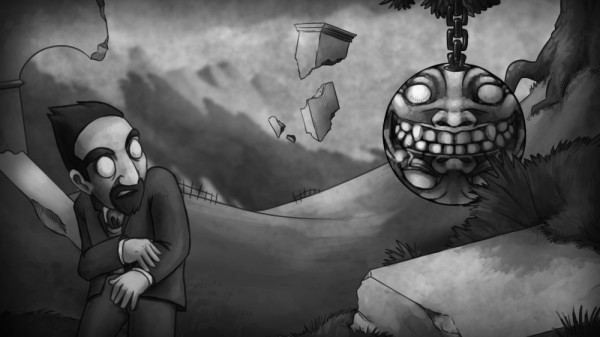 Overall
Combining the use of physics with M.C. Escher like locations makes the perfect combination for a puzzle game, that is only marred by slight issues with execution. The story that unfolds is an interesting addition to a puzzle game, but being forced to replay levels to revisit and re-read them complicates it unnecessarily. It also does get fairly difficult as the game continues, but players are afforded every chance to make it easier on themselves with the ability to back up after a mistake and simply try again until they can reach the exit. All of this makes The Bridge a solid puzzle game that fans of the genre can enjoy wrapping their head around.