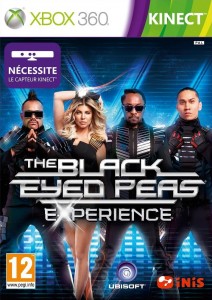 This time last year Michael Jackson: The Experience made it onto Wii, before Kinect was later supplied with a version in April 2011. Now The Black Eyed Peas are giving you an experience with them. I must admit, initially I was a bit sceptical about the whole thing. I’m not questioning The Black Eyed Peas’ popularity as most artists would come out second best when compared to Michael Jackson, but he’s a tough act to follow and on paper it appeared to simply be a move to make a quick profit. I was pleasantly surprised to find it was a decent dance game, then.

The BEP are big; Where Is The Love topped the charts in many different territories worldwide and announced their arrival to the music scene, and they have since moved with the times musically, following the trends and producing a much more ‘dance’ sound. This new sound works in their favour, though, as the new tracks are more suited to dancing to. That’s not to say there isn’t any of their older material on the game, though. In fact, scrolling through the setlist of 28 songs and seeing all the album art, you realise just how many records The Black Eyed Peas have released over the time they’ve been active, with songs from older albums like ‘Elephunk’ and ‘Monkey Business’ as well as their latest album ‘The Beginning’. 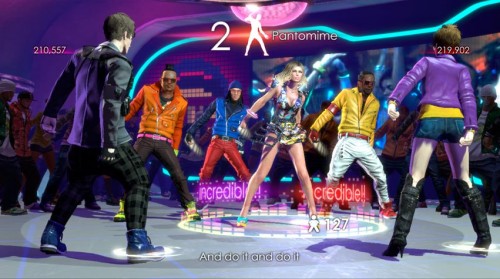 Of course, gameplay is made up almost entirely of dancing, with Kinect tracking the movements of your arms and legs and your body position to see how well you are following the moves. Your execution of each the dance move is judged with ratings of almost, good, great or incredible, with your final standings represented with a exam-style grade: ‘C’ or above is classed as a pass. The two modes are ‘dance party’, catering to your instant action needs if you’re playing with friends, or the more progress orientated ‘deluxe experience’ in which the grades you get have more weight, as a C or above will mean clearing the stage/song so that you can move on.

Depending on the mode you’re playing, your onscreen guides will either be the Black Eyed Peas themselves, or a set of backing dancers while you learn the routines before the main performance. Whoever your main guides, your in-game avatar will be standing onscreen facing them from the same perspective as you facing your Kinect. There’s also usually plenty of other dancers dancing away in the background to give the locations some added activity. All this contributes to a feeling that you are in a Black Eyed Peas music video, almost as the choreographer standing out of view and facing the group, except from the fact that you are following their moves, not the other way around.

The deluxe experience mode has a wonderful way of teaching you the dance moves; before you perform the main routine for each song, it makes you work through three steps. Each step contains three dance moves, making for a total of nine different moves in the real thing, where they are thrown together in a order you won’t have come across. By forcing you to work your way through these practices it simplifies the final routines and you end up doing them far more accurately than you would if you jumped in without preparing. You actually feel like you are learning the dance moves and doing the choreography correctly, an aspect that most other dance games overlook with the exception of the Dance Central games. 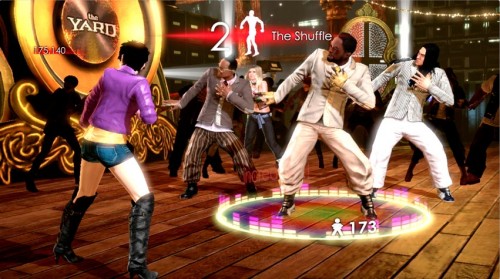 Satisfying clinking sounds and glinting visual cues accompany the tracking and scoring of each dance move, but success is also measured in another way. Well-executed moves earn followers, and the deciding factor on whether you pass a song or not is whether you have reached the required amount of followers by the end. Your rewards outside the song are also based around the amount of followers, because as the number continues to grow you upgrade and unlock venues, and unlock new clothing to dress your character in.

Multiplayer allows a second player to enter the fray with ease, simply by stepping in and being given their own character. It is also here that the singing sections of the game come into play, although the game can be enjoyed very well without them and they are best ignored. Those looking for a karaoke game should go elsewhere, as The Black Eyed Peas Experience is better for just dancing. In addition, you can create your own choreography in a dedicated creation mode which encourages you to share routines with friends, although it manages to simplify it to the point where you can’t achieve the effect you want, while still overcomplicating it so that the compromise isn’t exactly easy either. 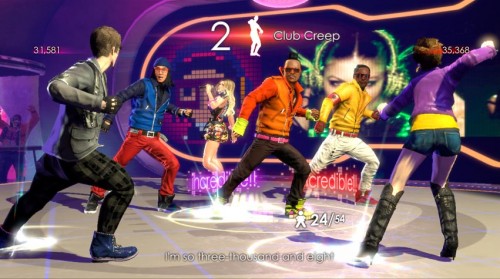 The graphics manage to convey the likenesses of each member of the group, capturing some of their personality in the movements. Much of the choreography is recognisable from its appearances in music videos, as it’s all moves from one of The Black Eyed Peas’ choreographers. However, although ultimately it doesn’t have a major bearing on the gameplay, there are only four stages meaning repetition becomes apparent even very early on. You can edit your character’s appearance to mix things up, but this is rather pointless as you spend most of your time looking at The Black Eyed Peas dancing as you follow their motions, and their outfits only change between each of the four levels but otherwise remain the same.

The Black Eyed Peas Experience left me with a sweaty back and a new-found love for The Black Eyed Peas. The structure in place ensures you learn the moves, ultimately allowing you to have more fun as you will be doing them correctly. Occasionally you can feel it’s a bit lax with the movement tracking, although it’s never anything serious. Repetition threatens to affect the ‘Experience’ you’ll have with The Black Eyed Peas, and the selection of 28 songs can be stretched a little thin after a while, but if you consider every last one of the tracks comes from the same group then the variety they’ve managed to achieve is something quite special. It lets you fully appreciate the groups versatility and prompts the conclusion that they do deserve their own game. Even if they aren’t as legendary as the King of Pop. It may not be the complete package, but I Gotta Feeling that for neutrals and for those who love The Black Eyed Peas, it’s a top-notch dancing game.