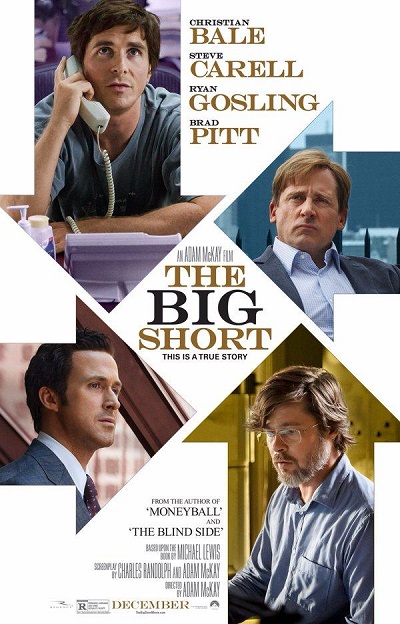 The Global Financial Crisis is one of the major events of the last decade with the collapse of a housing bubble in the US leading to a drop in the global market. It was a serious event which led to tragedy around the world as many lost homes and jobs. It’s been less than a decade since the event and The Big Short has now come along to give us one perspective on the world changing event. Directed and written by Adam McKay (Anchorman: The Legend of Ron Burgundy and Ant-Man), the film is his first attempt at a creating a drama. Fortunately for us, the comedic spirit is strong with Mckay and I found myself laughing more than crying during the screening. Read on to find out what I thought of the film (spoiler: I loved it). 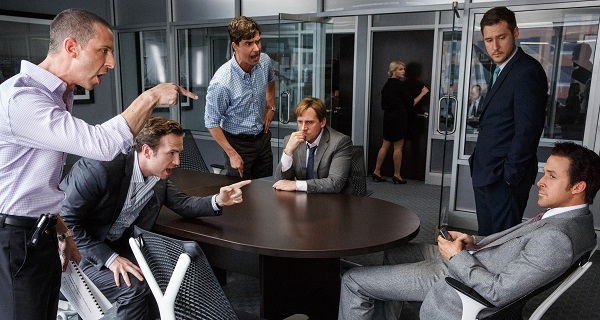 The film, based on a book of the same name, basically deals with the events leading up to and immediately after the Global Financial Crisis of 2007 and 2008. It follows a number of protagonists including a one-eyed financial savant named Michael Burry (Christain Bale), a rage-aholic fund manager named Mark Baum (Steve Carell), a morally bankrupt banker named Jared Vennett (Ryan Gosling), and a pair of young venture capitalists named by Jamie Shipley (Finn Wittrock) and Charlie Geller (John Magaro) as they all learn about the impending meltdown. As they investigate more and become more certain of the event, they each manoeuvre themselves into positions where they can profit off of this collapse. Although we as the audience know that the crash did happen, the suspense lies in whether or not the characters can hold their nerve and see through their plans to a fruitful conclusion. This creates an interesting build up for the audience where we wish for the protagonists to succeed… even if it means the collapse of the global economy.

The script has amazing dialogue throughout the film and alongside the performances of the actors it becomes a hilarious piece of storytelling. Most of the characters are interesting with their own sets of values, virtues, and flaws. In particular I found the characters of Michael Burry and Mark Baum to be quite interesting and unique with Bale and Carell both pulling out superb performances. Carell particularly surprised me with his performance of Baum who, as a character, is quite nuanced in how he exhibits the (sometimes) righteous rage of a man at odds with the financial system… but who ultimately is still profiting off of it. His relationship with his deceased brother is also skilfully used to emotionally manoeuvre the audience down from the comedic high about halfway through the film. Bale’s performance of Burry, on the other hand, is interesting in how he portrays a character with asperger’s in a way which is very restrained but dripping with sympathetic social awkwardness. The first scene with him is strong enough that you’ll be charmed by his off-putting demeanour. Kudos to McKay for bringing these performances out of these actors! 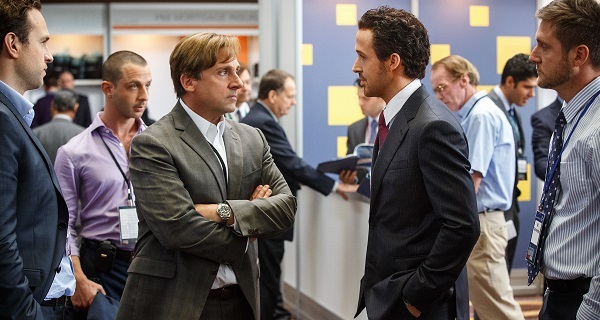 One aspect which I particularly enjoyed in this script was the use of vignettes and asides throughout for both comic and educational effect. Throughout the film, whenever the characters encounter some new (to the audience) concept or financial jargon; the film cuts away from the action of the plot to a vignette featuring a cameo by a celebrity. One particular example involves having the explanation of the definition of “sub-prime” being given by a very attractive someone (no spoilers) in a bubble bath… it’s certainly an interesting technique for discussing financial markets. Another aspect of the script which was used quite effectively was the use of asides where characters would directly address the audience and talk about some specific aspect of the scene and generally whether it correlated to reality. In one scene Shipley and Geller come across the presentation notes of Jared Vennett predicting the crisis in the lobby of one of the big banks. Magaro turns to the camera, in character, and states to the audience that they actually learnt about the impending crash through mutual acquaintances but that this was a more interesting way to represent it cinematically.

While it has this element of reality, the film largely engages with these events from the perspective a conventional fictional film narrative with conceits like an easy to follow plot, outrageous coincidences (such as the one above), and expository dialogue. It engages with these aspects in a very self-aware manner to great comedic effect. It also draws upon styles and techniques from popular documentaries such as the works of Morgan Spurlock and Michael Moore in giving expository dialogue. It works in making the film interesting as well as making the subject matter palatable. 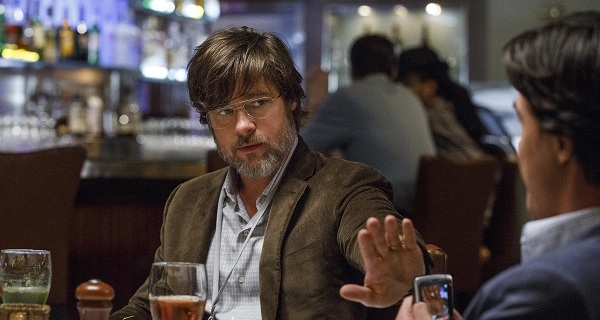 Unfortunately the slick editing starts to lose its pace about two thirds of the way through the movie. I felt that that about the halfway mark, we experience a number of anti-climaxes which took the wind out of the sails of the narrative a bit. There is still a sense of expectation and baited breath as we know that the events the characters are predicting turn out to be completely accurate, but it still has an effect on the film’s flow. This might have been the result of the film trying to stay relatively accurate to events as they unfolded but I feel my point remains.

Despite what the marketing for the film prominently featuring his name, Brad Pitt is not given a central role within this film. His character is at least given one of the more important and sobering lines of dialogue in the whole film but to a large extent his role is to the sidelines of the main action. It’s not something which I consider to be a flaw, but this may disappoint fans of his work and I feel that to a large extent he may have been given his role as a method of adding more star power to the film.

Another aspect which is noticeably absent in the film is the presence of female leads. None of the protagonists are women and I believe I could keep count of the number of named female characters in the script. This is somewhat disappointing as according to Wikipedia, the book it is based on recounts the efforts of several women investigating and predicting the crisis. It is a shame that McKay could not then find a way to place them within his narrative. 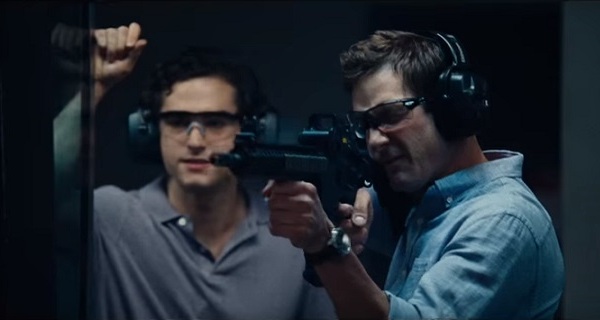 The film presents us with some interesting images and montages to convey symbolic, albeit perhaps in a somewhat heavy-handed manner. Seeing a young woman, who we know works for one of the institutions that regulates banking transactions, in the embrace of a banker is a not so subtle representation of how the regulators and regulated were largely in bed with each other leading up to the crisis. A number of montages are used throughout the film largely to show the passage of time which is done largely through sampling various snippets from a number of cultural touchstones. Overall, McKay’s direction and visual style is vibrant and fun to watch. 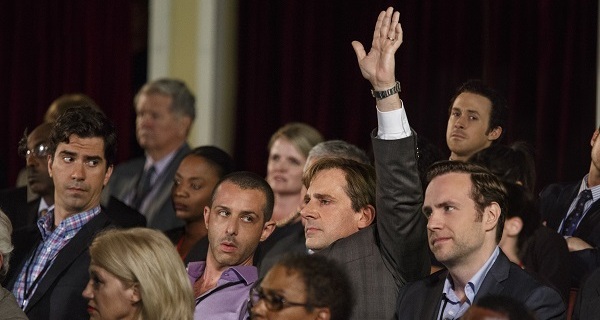 The film’s soundtrack is wonderfully eclectic in the pieces it brings to bear. You’ll find everything from the Gorillaz’s Feel Good Inc. to pieces from The Phantom of the Opera. These largely compliment the mood of the scene as it develops and is mostly kept to songs which were released during that period to further reinforce the sense of being in the late 00s. The music selection does hit a lot of my nostalgia buttons and I can say quite honestly that I did enjoy the soundtrack.

The film makes interesting use of diegetic music as well which is particularly prominent with scenes involving Burry. The music which plays is generally hard rock or metal which juxtaposes quite well with quiet nature of the Burry character and helps to reinforce Bale’s portrayal as a man who is not heard… in a very audible sense. As a fan of metal myself, I fully endorse giving this feature to Burry’s persona. 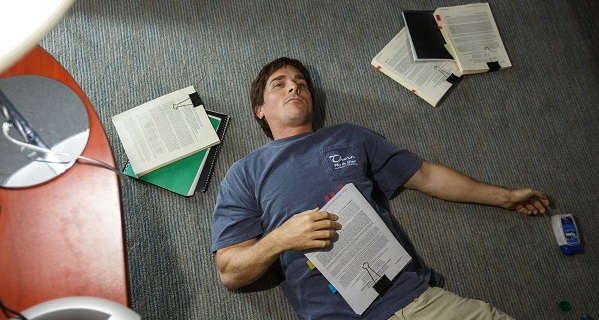 Overall, I very much enjoyed this film and found myself laughing pretty much throughout its run time. The script and editing are slick, sleek, and (most importantly in a comedy) witty with excellent performances from all the cast. The visual direction and sound design are both similarly of a high calibre working to reinforce the narrative. This is a movie which is very much for and of our time so I’d recommend that if my opinion has piqued your interest, then you should go see it as soon as you can. I don’t believe it’ll have the same impact on an audience the further we get from the events it portrays… but it’ll still be as well made. With this last note I will conclude; I think this film is damn near perfect and I have no hesitation in recommending it to anyone and everyone. 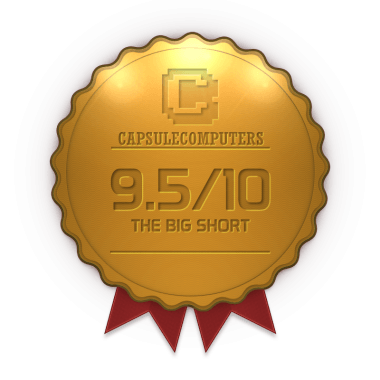